Short entry here. Was cutting down a tomato plant in my balcony garden as the growing season has ended. Amidst the leaves was a short thread that must have drifted down from someone’s laundry drying on a higher floor. How long the thread was stuck on the plant, I can’t say. What caught my eye, though, was that some sort of spores were growing from the thread, looking like eyelashes. I was fascinated at this example of how nature works. 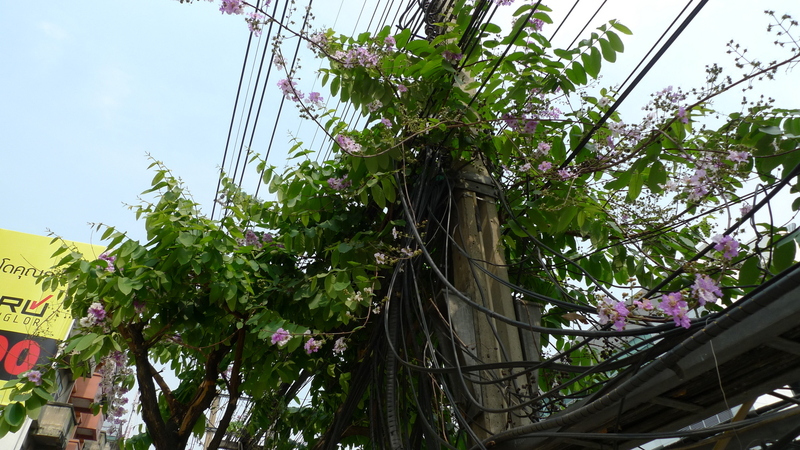 Walking along New Phetchaburi Road the other day, my eye was caught by this “man versus nature” image: the thick tangle of electric and telephone wirtes being taken over by blooming vines. Both amaze me. 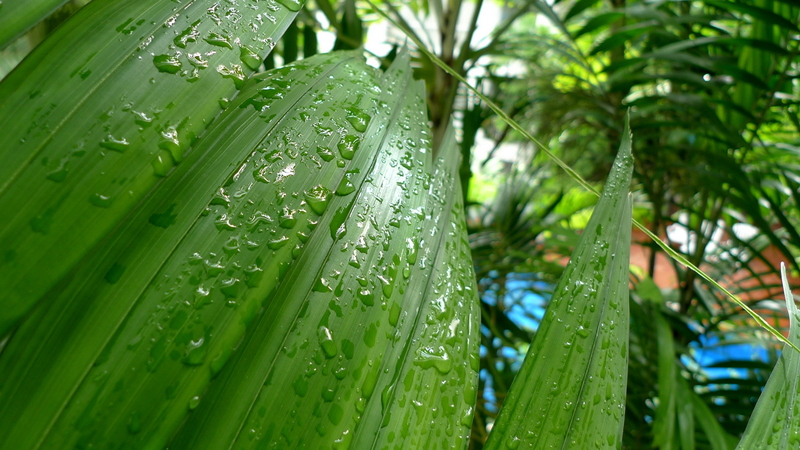 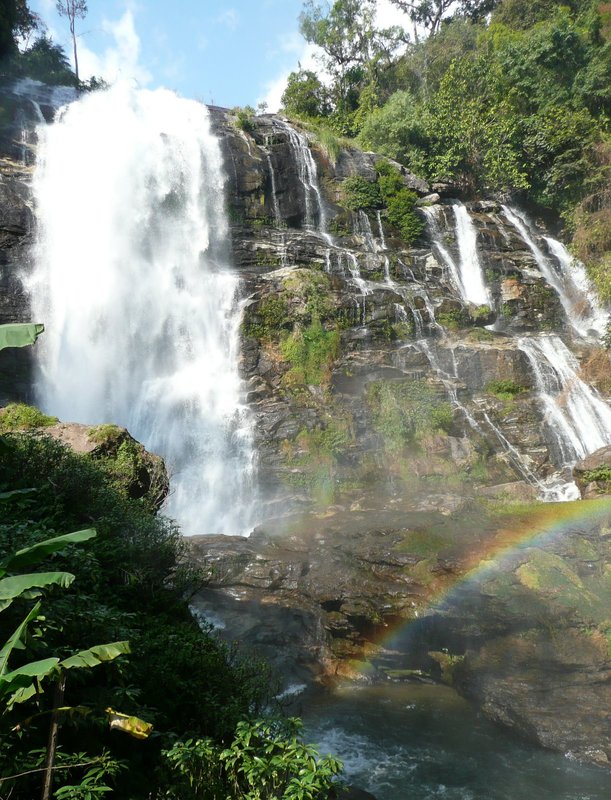 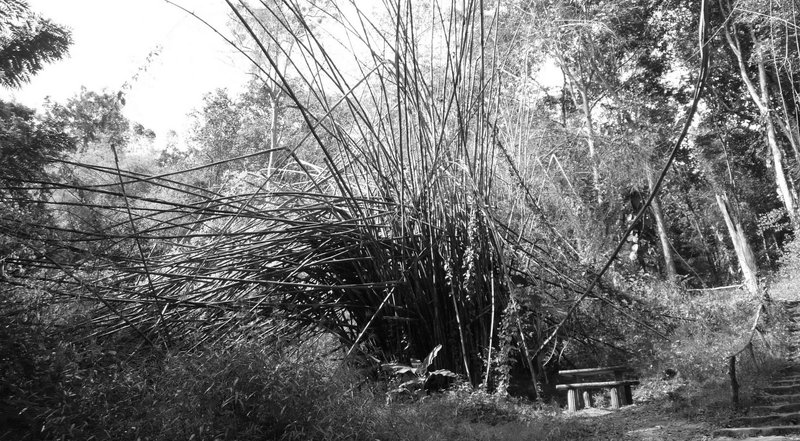 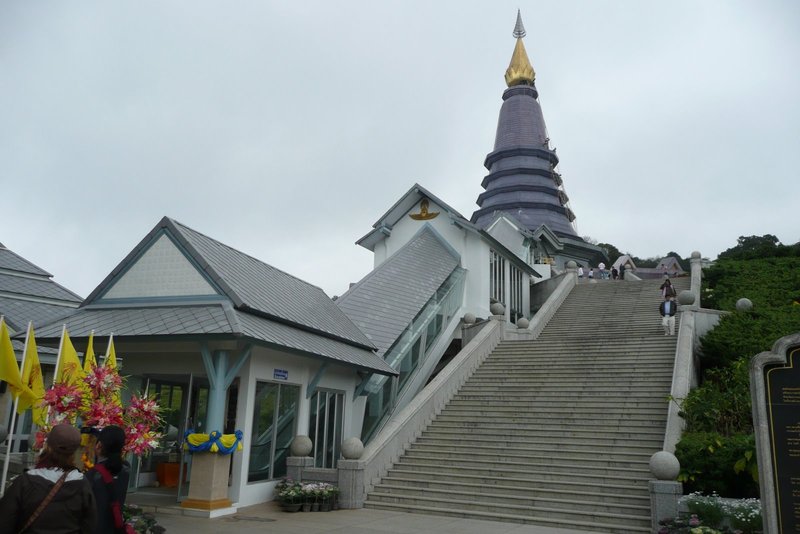 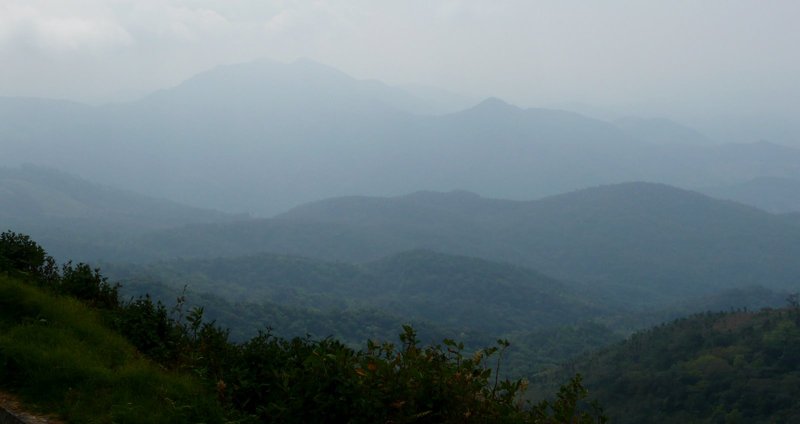 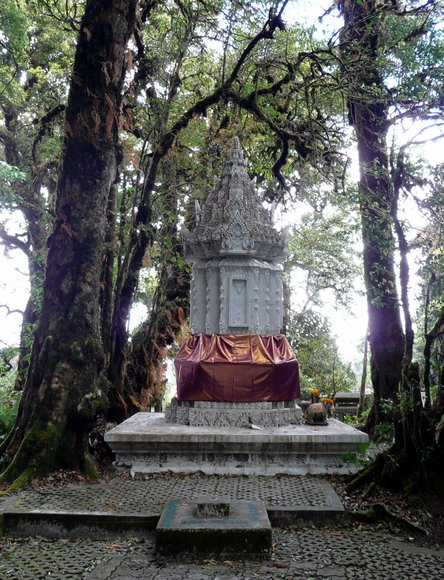 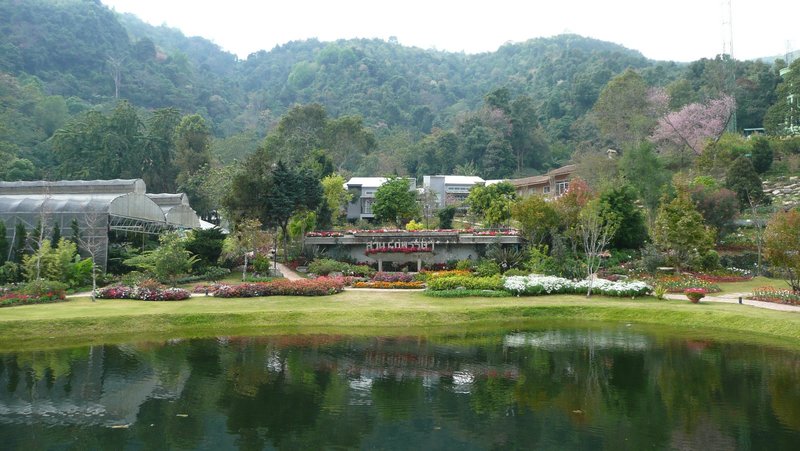 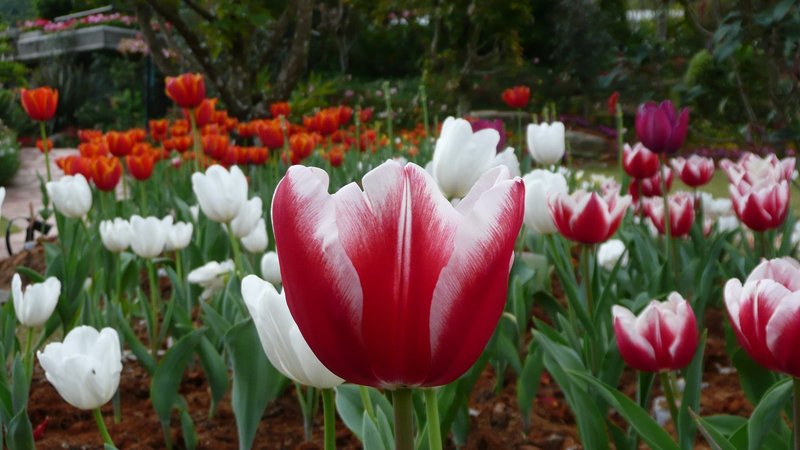 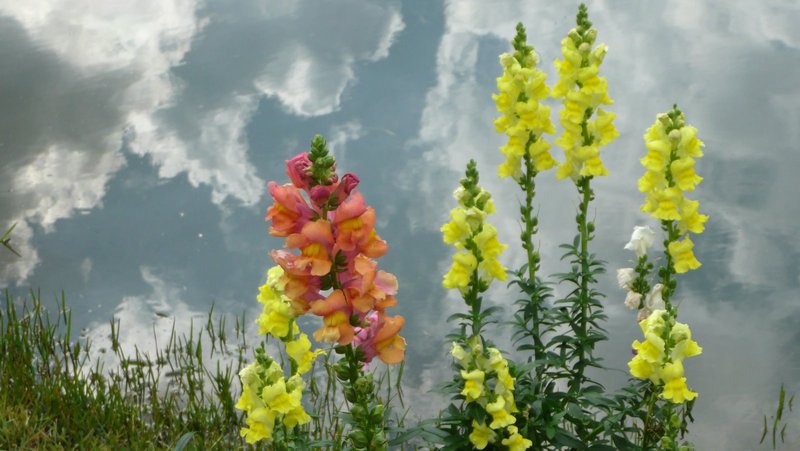 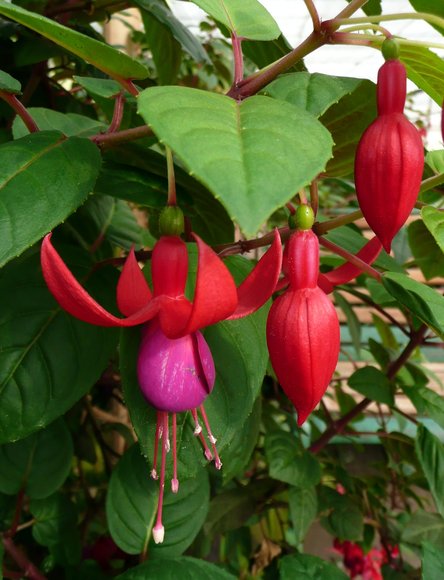 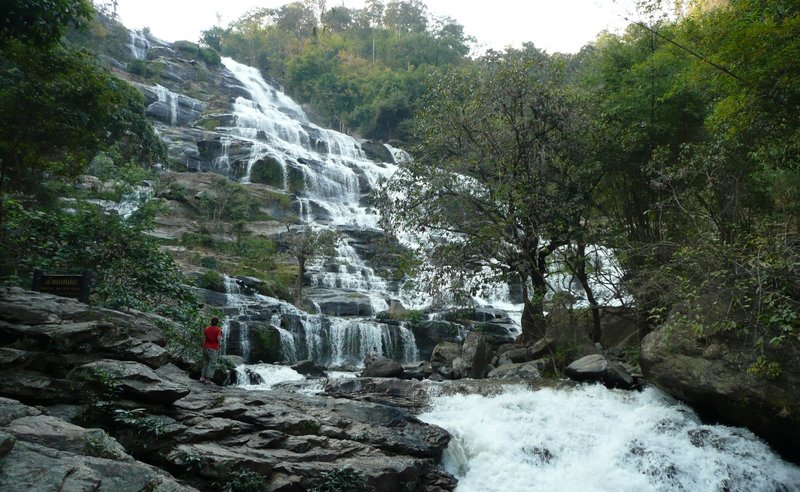 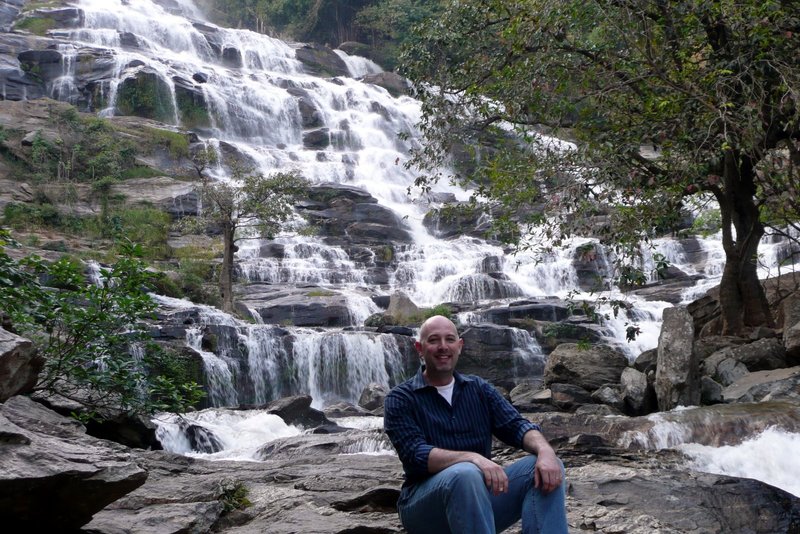 Sakura – cherry blossoms – are one of the common images of Japanese culture.  The fleeting existence of the blossoms and their incredible beauty and delicacy have inspired artists of all genres and give good reason for the citizens of Tokyo to come out to the parks and celebrate the emergence of another spring.

Had we arrived a week earlier, we would have seen them in their fullest stage, but per Masakazu’s recommendation we headed directly to the park on our first day here to catch them while we still could.  Thankfully, we did, because the breezy weather had pretty much stripped the trees by our second day here.

Ueno Park is nearby our hotel, home to the zoo and several museums, and adjacent to Tokyo University.  This is one of the popular places to come see the sakura. 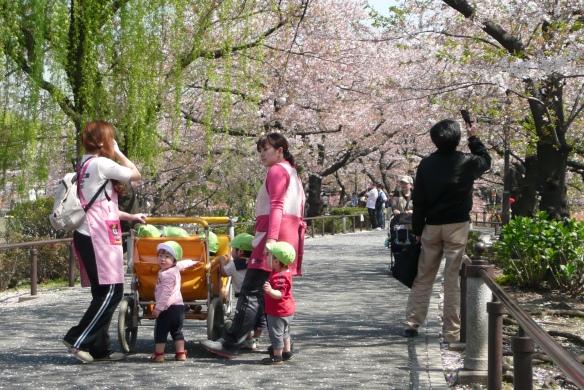 Everyone was out, even in the midst of a weekday morning.  Business men, pre-schoolers, retirees.  And lots of people had cameras.  So much appreciation for nature. 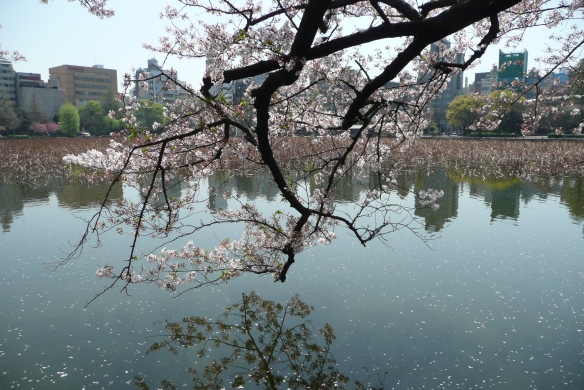 Who wouldn’t be inspired to write a poem?  The brown stalks are lotus.  In the summer, this whole lake it filled with chest-high lotus blossoms. 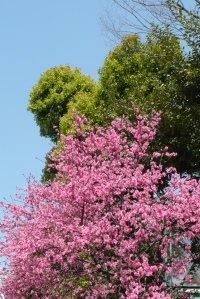 Some of the sturdier types of blossoms were still out in full force, giving us an amazing display of colors. 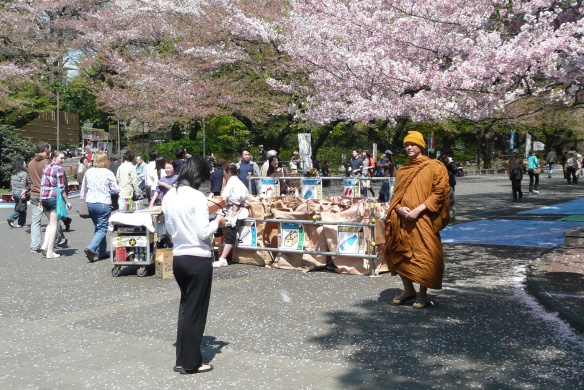 The park was full of vendors, visitors, and recycling bins to sort out the rubbish left by the sakura-viewers.  Not the sheets laid out in the shade.  Different groups staked their claim to viewing spots for after-work parties.  We were amazed by how many groups of office workers came out in the evening to sit under the trees, drink, and socialize.

Above, a Thai monk poses for a picture with the sakura.  Below, sakura in the setting sunlight. 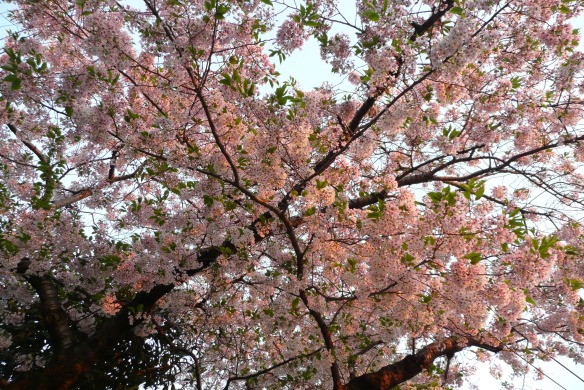 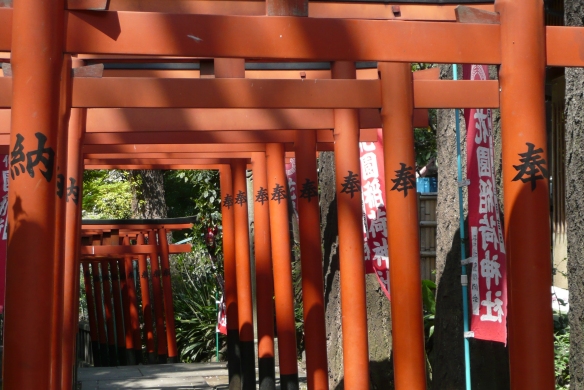 Ueno Park also has a long line of tori gates, which mark the entrance to a shrine.  Their orange-red hue is amazing and the repetition of the gates makes for a meditative walk through them. 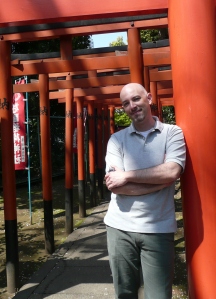 In the evening, the crowds came to the park, taking their reserved spots and enjoying the pleasant weather and the remaining blossoms.  Dozens of vendors served favorite snacks and everyone was drinking.  So far, I’m of the opinion that the Japanese are a pretty heavily drinking population, at least those who live and work in Tokyo. 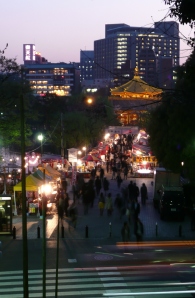 Above, a view of the vendors lining the path to one of the shrines.

The longer I stay here, the more aware I become of the changing seasons.  This requires a much higher level of attention because the changes are more subtle than in regions further from the equator.

Expats in Thailand often jokingly refer to the three Thai seasons as “hot,” “hotter” and ‘damn hot”.  This year we enjoyed the coolest winter in a decade and so the transition into ruuduu rone,  literally “hot season”, is more pronounced than in the past few years.  Likewise, the springtime burst of blossoms is more noticeable, too. 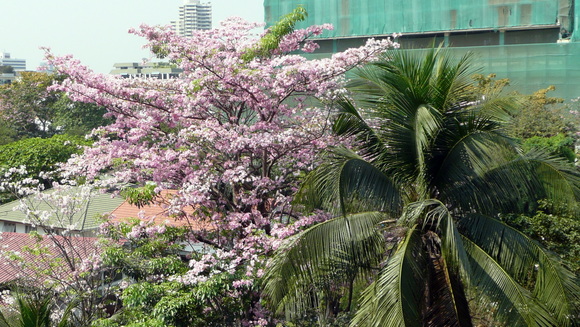 Above is an example of dtonmai chompoo pantip.  They are everywhere in Krungthep this week.  While less delicate and refined than the Japanese sakura (flowering cherry trees) that blossom each March and April in the land of the rising sun, these Thai sakura give us a week or two of beautiful and festive color.  Our soi is littered with pink blossoms.

In other news, we have a neighbor somewhere in our condo complex – a few stories above us, I think – who seems to really like stinky tofu.   Once or twice a day they start frying it up, turning on their kitchen fan to vent the smell, which then pushes it into our kitchen.

To say that it is overpowering is an understatement.  While I appreciate that everyone has a different sense of taste and I don’t claim to the be arbiter of what should and should not be prepared, every day is a bit much.  Tawn has climbed the stairs to try to figure out who the offender is.  But the problem is, since the smell is vented into a central air shaft, you can’t smell it out by the front doors of the units.

So the mystery remains.  Might be time to go talk to building management and have them post a “no durian or stinky tofu” memo.

Tawn and I are off to Kuala Lumpur this weekend for a few days, our first time.  May not have a lot of entries over the next few days but I’ll update as soon as I can. 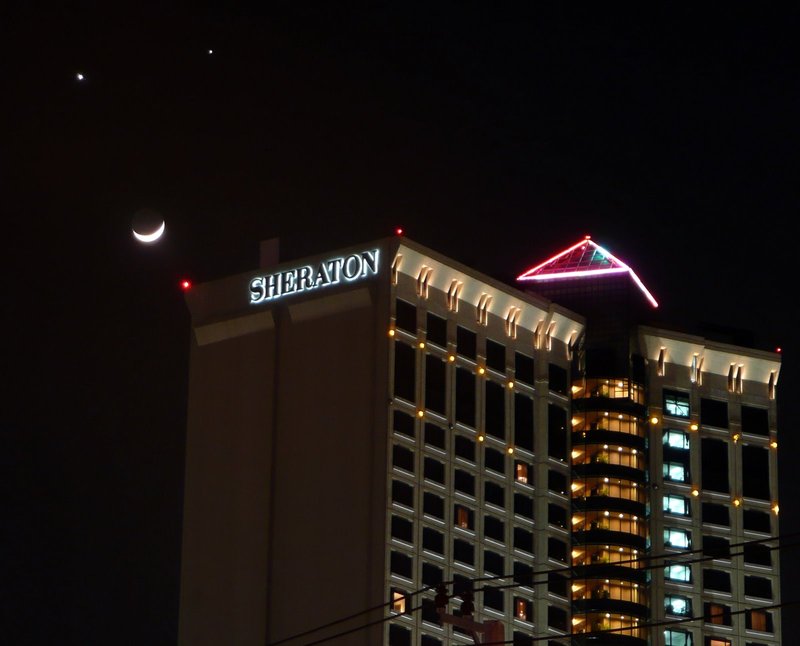