After three busy days of meetings in Hong Kong, I made the over-optimistic travel plan to catch a 7:15 pm flight from Hong Kong to Shanghai in order to deliver a training at 9:00 am the following day. Given the air traffic congestion in China, especially into Shanghai, that proved a painful mistake.

My flight was scheduled on Dragonair, a subsidiary of Cathay Pacific that operates more of the local and regional flights, especially to China. When I checked in at the airport about 90 minutes before departure, the agent said the flight was showing on time, even though all other flights to Shanghai were showing massive delays.

Sure enough, about five minutes before boarding time, the departure was rolled back two hours. Apologies were made and vouchers worth about US$10 were offered. (In fact, the agent told me I could just show my boarding pass at any restaurant in the airport to receive the discount; that turned out to not be the case.) 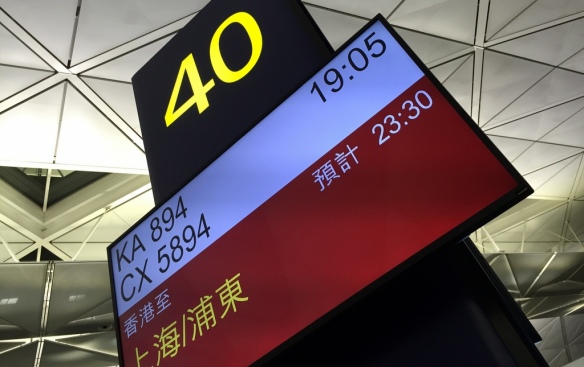 At the revised departure time of about 9:30 pm, the delay was suddenly extended another two hours to 11:30 pm. While I understand that there is a lot of confusion and uncertainty about when the departure times will be (the captain later explained we initially had been given a 3:30 am departure slot) it seems clear that they knew the 9:30 pm departure was not realistic and it should have been revised earlier.

Finally, we started boarding about 11:00 pm and pushed back not too much after 11:30. We were in the air quickly and on our way for the two-hour flight. When I checked in online, I was able to get a bulkhead row, albeit a middle seat, so enjoyed at least a bit of extra leg room. The flight was full. 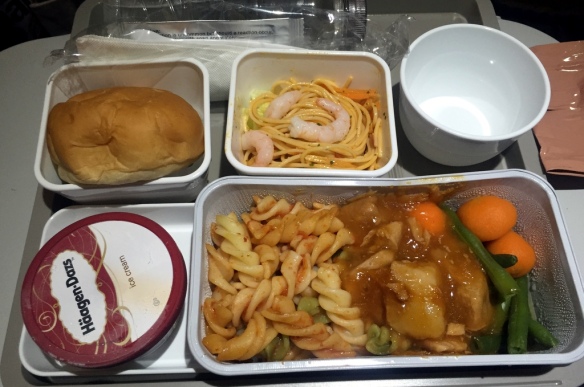 Dinner was served – they actually even handed out a simple menu. The started was a shrimp and angel-hair pasta salad. The main courses were steamed sole with bean curd and black bean sauce over rice, or a pork with apple cider stew and fusilli pasta, which I chose. The pork was okay for airplane food, nothing special. Dessert was Haagen-Dazs ice cream, which is always nice. 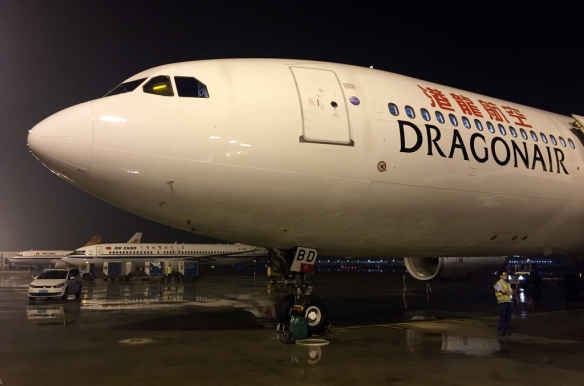 When we landed in Shanghai, the only gates still available were the remote stands in the cargo area, which is quite on the opposite side of the airport from our normal terminal. While I didn’t complain too much – at least I was able to exit via stairs and get a nice picture of a UPS 747 freighter – the bus ride took more than 15 minutes, literally around the perimeter of the airport. 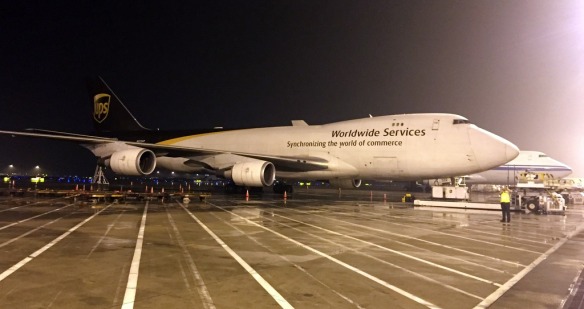 The upside was that the immigration queue was short as we had arrived so late. It did take another ten minutes for our luggage to arrive and the taxi queue also took about fifteen minutes as there are few cars that late. I finally arrived at my hotel room at 3:30 am and was downstairs in the meeting room at 8:00 am.

It was a long day, but not too bad. I had a good group of students, staff level learning the basics of presentation skills. They all pushed themselves outside their comfort zone, delivering in English even though for many of them, it is a struggle. One girl was petrified and after her three-minute introduction presentation, was nearly in tears. Everyone gave her a lot of positive feedback about being brave enough to face her fears. Was very moving.

The most peaceful time to see any city is the hour before sunrise, when it is just beginning to wake. On my final morning in Paris, I woke up early and headed to the River Seine to catch these views of the city.

With the help of the internet, I was able to determine not only what time the sun would rise but also from what direction. Comparing that against a map of Paris, it was not difficult to figure out that I would need to be somewhere between the Jardins du Trocadero and the Pont de Bir-Hakeim to see the sun rise somewhere behind the Eiffel Tower. It was easy enough to flag down a taxi at 5:30 on a Saturday morning and within ten minutes I was walking down the terraced Trocadero gardens towards the river.

The most beautiful colors are actually in the hour before sunrise, I find. So as the sun neared the nearly clear horizon, I started walking east along the river, down on the footpath that lines the Right Bank.

There are numerous houseboats moored along the river, beautifully maintained and many available to hire for river cruises. In the distance you can see the bridge (Pont de Bir-Hakeim) from which I shot the previous picture.

The tower is so large that it dominates your view. It looks different from various perspectives and I enjoyed watching how this changes as I walked along the river. Eventually as the river curved, I crossed to the other bank to keep the sun across from me.

About a kilometer along the river, just past the Pont de l’Alma, is Promenade des Berges de la Seine, a public park and promenade that includes five interesting floating gardens, barges that have been turned into public parks similar to the High Line in New York City. 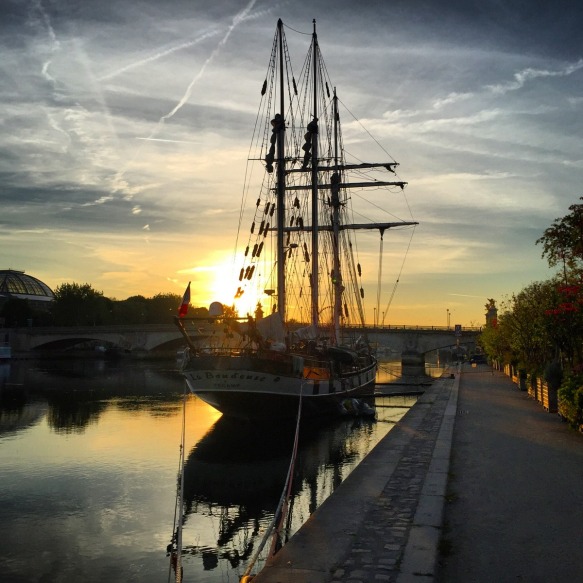 Nearby was La Boudeuse, a 100-year old three-mast ship built originally in Hollande but now moored in the River Seine after a renovation a few years ago. This photo appeared in Instagram and has been tampered with a bit for effect. 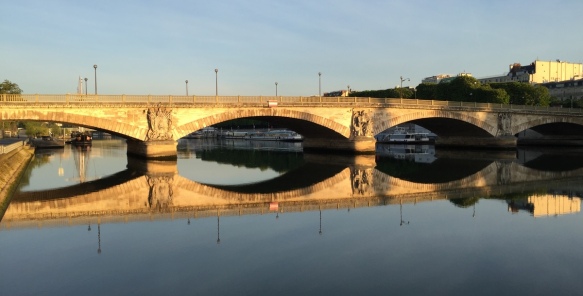 Looking back at the Pond des Invalides, the lowest bridge crossing the River Seine.

Another kilometer or so and I arrived at Musée d’Orsay, the beautiful former train station that is now a fine museum. The Beaux-Arts exterior was glowing in the morning sun.

Another half-kilometer along the river there is another turn at the Île de la Cité comes into view, sitting smartly in the middle of the river. It is one of only two remaining islands in the river and is the site of the medieval city was. 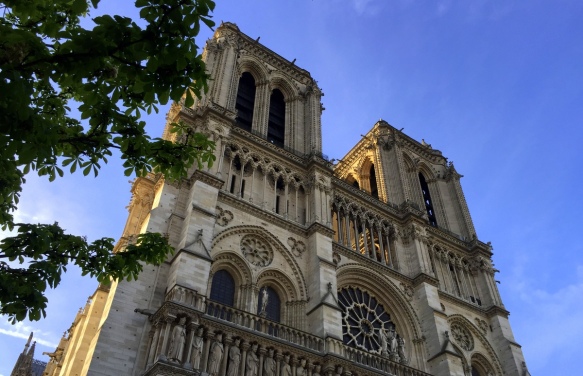 Finally, I reached the end of my nearly five-kilometer walk along the river, crossing over to snap this picture of the Cathedral of Notre Dame. This beautiful walk gave me the chance to contemplate Paris on my own, watching as it went from a sleepy sunrise to a gradually awakening city.

Fancy a soup and sandwich while exploring the Left Bank? For a light lunch, this narrow restaurant in the 6th arrondissement offers a simple menu built around bread from the acclaimed next-door bakery and Cuisine de Bar owner, Poilâne.

We visited the location in the 6th arrondissement although there is another in the 3rd arrondissement as well as in Chelsea, London. The setting is cozy (read: tight) but also welcoming. The kitchen is a bar on the right, dining is along a banquet to the left and a small room in the back. The setting is bright but a bit warm from the open salamanders (broilers) in the kitchen.

The menu is quite simple. Set menus or individual items. Sandwiches are all open-face slices of next-door bakery Poilâne’s beautiful loaves with a few simple toppings. The tomato, mozzarella and basil one was a delight. 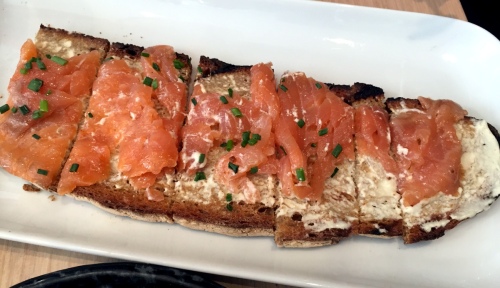 The smoke salmon was also nice. There were sets including the soup of the day and a glass of wine, reasonably priced. 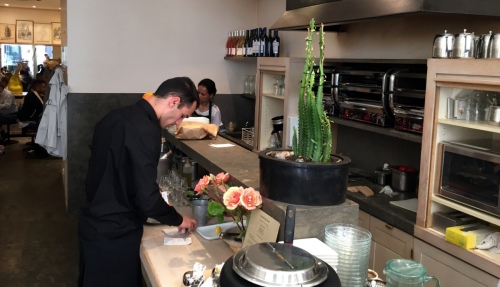 A view of the narrow kitchen. You can see where the heat was coming from! The staffing the day we visited was minimal: one person in the kitchen, two waiters and a person clearing and washing dishes. Based on how hectic and slow service was, I suspect they were short-handed at least one person. Who knows? Perhaps this is the way they normally run the show.

The service was polite but rushed. Trying to flag someone down to take our order was excruciating, until I realized that the waiter understood the order in which people had arrived and was taking the orders according to that. The wait was just something we had to deal with. It would have been nice to have been asked for some patience (the woman dining next to us seemed a bit put off) but we were on holiday, so why not just relax and enjoy the atmosphere? 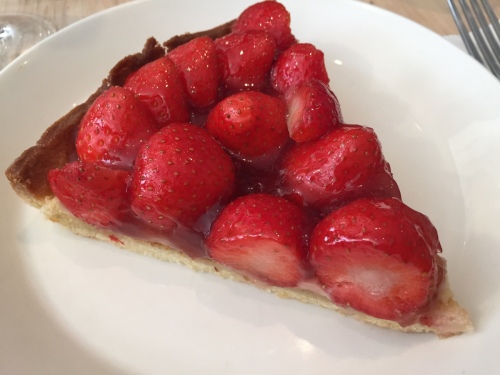 There were a few desserts including this very nice strawberry tart. As the rush was slowing near the end of the the lunch service, we took the time to enjoy a slice along with the coffee drinks that accompanied the set menu. 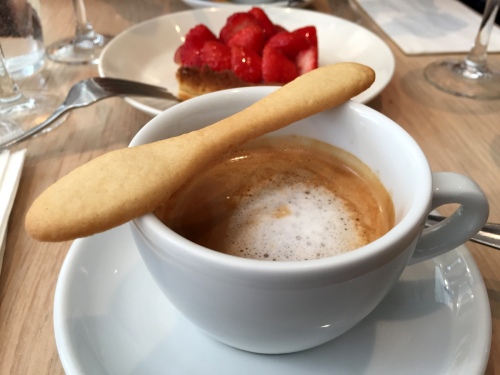 With a cute cookie spoon with which to stir your coffee!

The simple exterior of the restaurant on a sunny and warm Spring afternoon. Overall, I think La Cuisine de Bar is a worthwhile stop if you are on the Left Bank and are looking for a simple lunch. The bread is nice (buy a loaf next door!) and sometimes you want a simple lunch that still feels sophisticated.

There is perhaps no dish more French than the soufflé. And one of the best places to have a soufflé at a reasonable price in Paris is Le Soufflé, an elegant dining room located a short walk from the Louvre and Tuileries Garden. 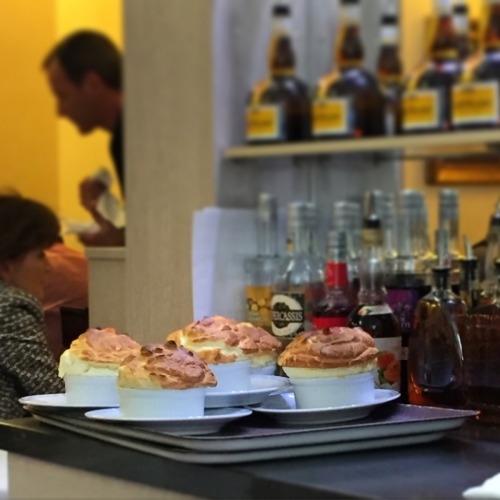 We found Le Soufflé quite by accident, intending to have lunch at a recommended Asian restaurant just a few doors away. They were full, however, and we popped in at the upscale-looking Le Soufflé based on the charming exterior and the Zagat and other stickers posted by the front door.

The young man greeting us was friendly and when we explained we had not reserved, he looked around the room and told us that if we could return in twenty minutes, he would have a table for us. After a short stroll around the block, we returned and were rewarded with a generously-sized table in the middle of the room.

With a clientele that seems mostly made up of local office workers and older-school establishment types, I felt a little self-conscious. (“Look, the American!”) But the friendly and diverse staff made us feel welcome. In fact, the restaurant reminds me a bit of Cafe Jacqueline in San Francisco, in that the staff can seem a bit stern from the outside but they take good care of their guests.

The soufflés (mine with a black olive tapenade and Tawn’s with smoked salmon) arrive relatively quickly. You sense that they must be preparing the choux base in advance and then folding in freshly-whipped egg whites. The size looks large, of course, impressively puffed up – but remember that a soufflé is largely air so a person can consume one relatively easily.

For dessert, I opted for a rhubarb soufflé. This is one of my favorite fruits and was just in season so it appeared on many menus. The tartness of the rhubarb cut through the richness of the soufflé and made for a pleasant end to the meal.

The set lunch including a glass of wine and a coffee to follow was only EUR 28, about US$ 32. For the quality and quantity of food, it was quite a bargain. Le Soufflé is on my must-visit list for a quintessential French experience.