Fancy a soup and sandwich while exploring the Left Bank? For a light lunch, this narrow restaurant in the 6th arrondissement offers a simple menu built around bread from the acclaimed next-door bakery and Cuisine de Bar owner, Poilâne.

We visited the location in the 6th arrondissement although there is another in the 3rd arrondissement as well as in Chelsea, London. The setting is cozy (read: tight) but also welcoming. The kitchen is a bar on the right, dining is along a banquet to the left and a small room in the back. The setting is bright but a bit warm from the open salamanders (broilers) in the kitchen.

The menu is quite simple. Set menus or individual items. Sandwiches are all open-face slices of next-door bakery Poilâne’s beautiful loaves with a few simple toppings. The tomato, mozzarella and basil one was a delight.

The smoke salmon was also nice. There were sets including the soup of the day and a glass of wine, reasonably priced.

A view of the narrow kitchen. You can see where the heat was coming from! The staffing the day we visited was minimal: one person in the kitchen, two waiters and a person clearing and washing dishes. Based on how hectic and slow service was, I suspect they were short-handed at least one person. Who knows? Perhaps this is the way they normally run the show.

The service was polite but rushed. Trying to flag someone down to take our order was excruciating, until I realized that the waiter understood the order in which people had arrived and was taking the orders according to that. The wait was just something we had to deal with. It would have been nice to have been asked for some patience (the woman dining next to us seemed a bit put off) but we were on holiday, so why not just relax and enjoy the atmosphere?

There were a few desserts including this very nice strawberry tart. As the rush was slowing near the end of the the lunch service, we took the time to enjoy a slice along with the coffee drinks that accompanied the set menu.

With a cute cookie spoon with which to stir your coffee!

The simple exterior of the restaurant on a sunny and warm Spring afternoon. Overall, I think La Cuisine de Bar is a worthwhile stop if you are on the Left Bank and are looking for a simple lunch. The bread is nice (buy a loaf next door!) and sometimes you want a simple lunch that still feels sophisticated. 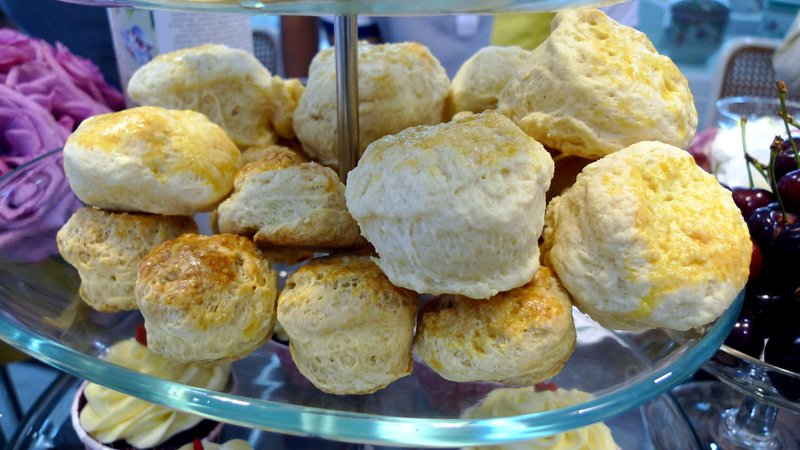 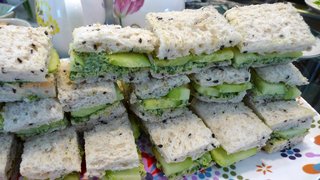 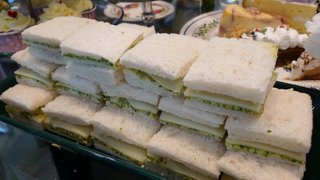 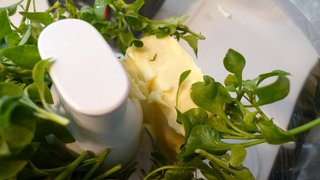 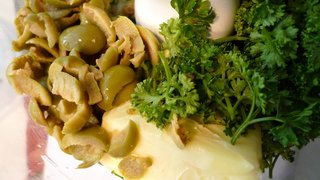 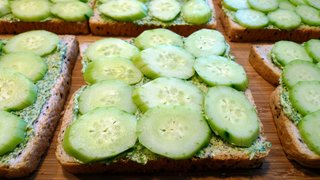 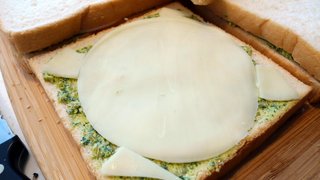 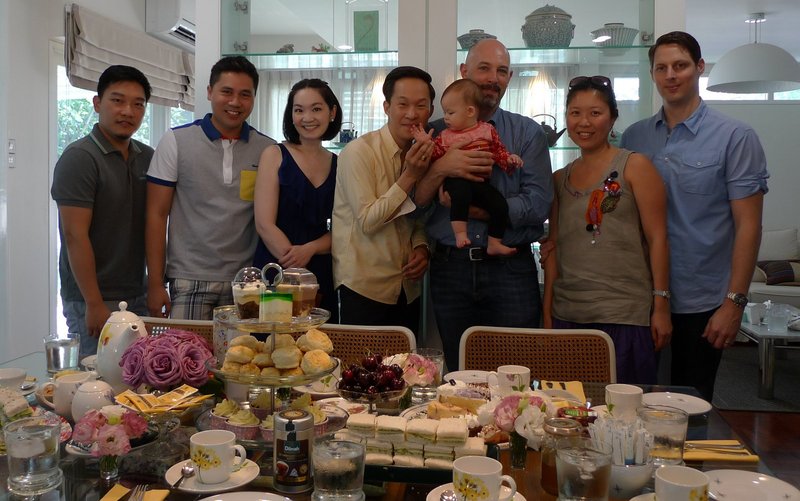 A few weekends ago we had friends over for brunch. I had slow-roasted a pork shoulder and thought it might be nice to thinly slice the meat and make Bánh Mi, the Vietnamese style sandwiches, as a main course. 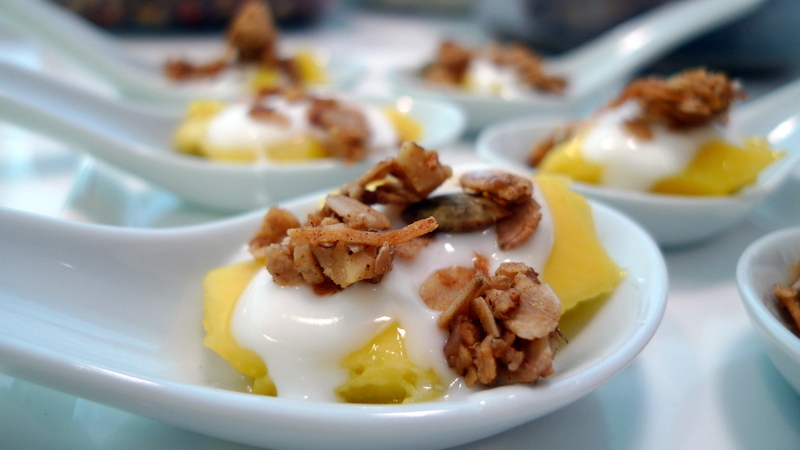 Appetizer: cubes of fresh mango (so sweet this time of year!), drizzled with plain yogurt and sprinkled with some homemade granola. 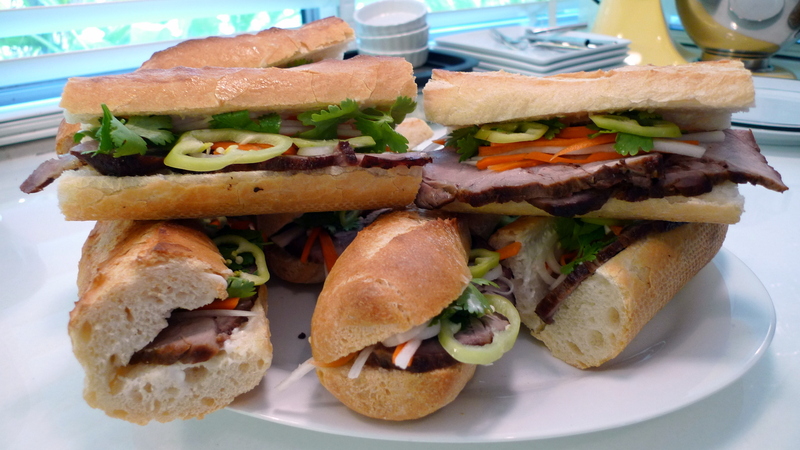 Homemade Bánh Mi: Baugettes from Le Blanc bakery on Sukhumvit Soi 39 with sliced roasted pork shoulder, corriander, mayonnaise, pickled carrots and daikon radish, hot peppers, and a splash of fish sauce. In this initial round, I didn’t add enough pickles. The next evening I made another batch, this time with more pickles, and the results were much closer to authentic. 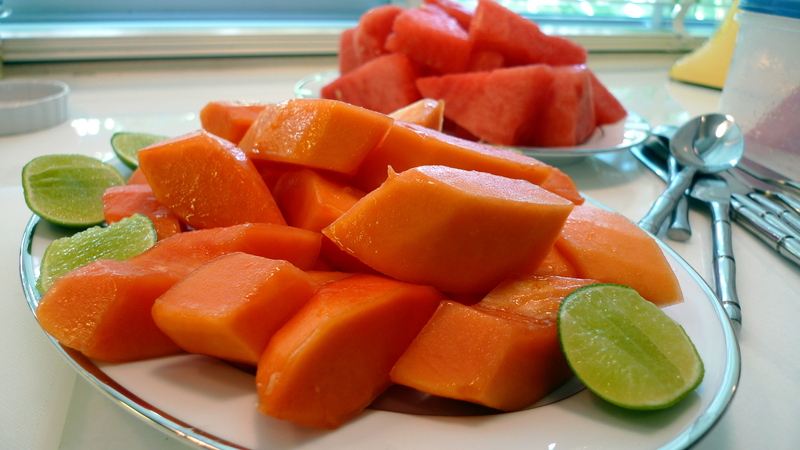 Fresh papaya and watermelon for dessert. 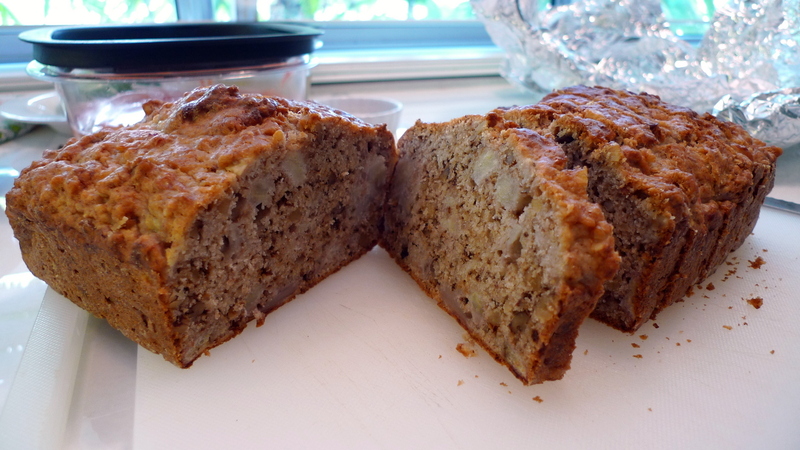 And a loaf of homemade banana bread, served with some whipped cream cheese and butter.

After dining twice at ‘ino in New York and purchasing their cookbook, Simple Italian Sandwiches: Recipes from America’s Favorite Panini Bar, you knew that I would begin preparing as many panini as were necessary for me to feel confident in my understanding of them, right?

The first step was to make some of the condimenti.  Perusing the cookbook, I realized that one thing that had kept my pre-New York panini from really popping was the lack of a flavorful condiment.  Generally, a panini is made with a meat ingredient, cheese, and an acidic or sour ingredient.  Most of the time I was using mustard but that didn’t have enough impact. I started with four main ingredients: garlic, red onions, red peppers, and a kind of chile that was the closest thing to a cherry pepper I could find. 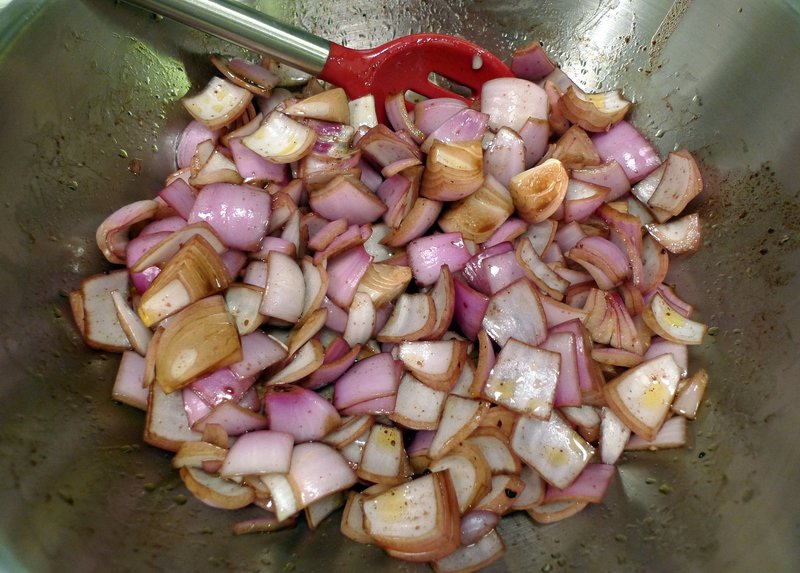 Several of the red onions were cut into sixteenths and then tossed in olive oil and balsamic vinegar. 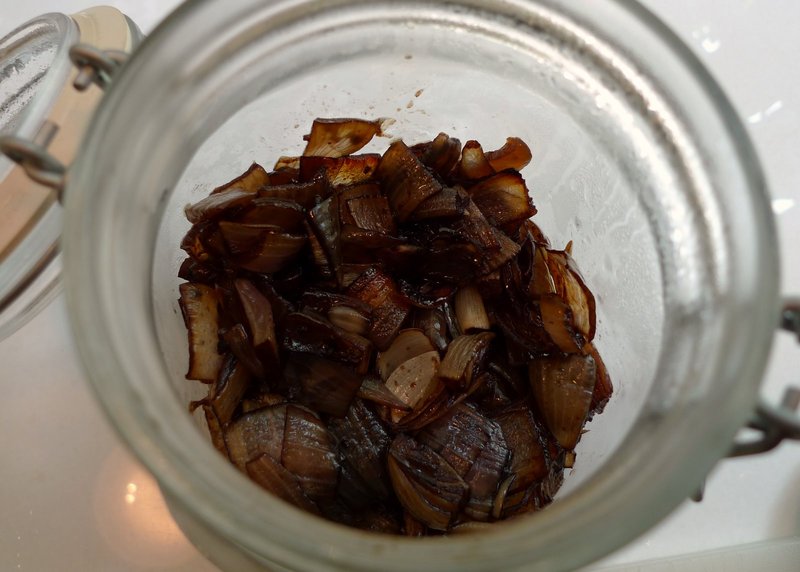 After about two hours at a low temperature with frequent stirring, we had a nice mass of caramelized sweet onions.  I also made some balsamic roasted garlic bulbs. 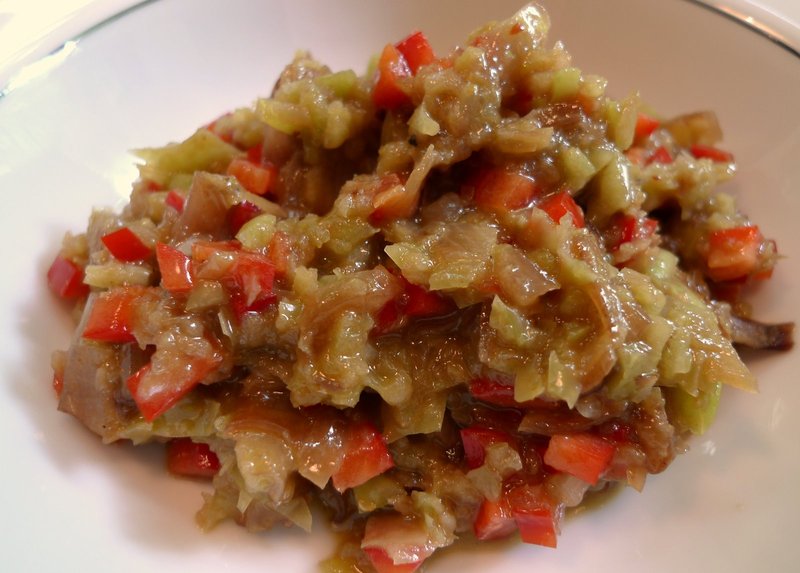 Using some of the sweet onions as a base, I chopped some of the hot chilies (mostly deseeded to keep the heat at a tolerable level) and a little bell pepper to create a relish.  Normally this is made with cherry peppers, which are mildly spicy round peppers. 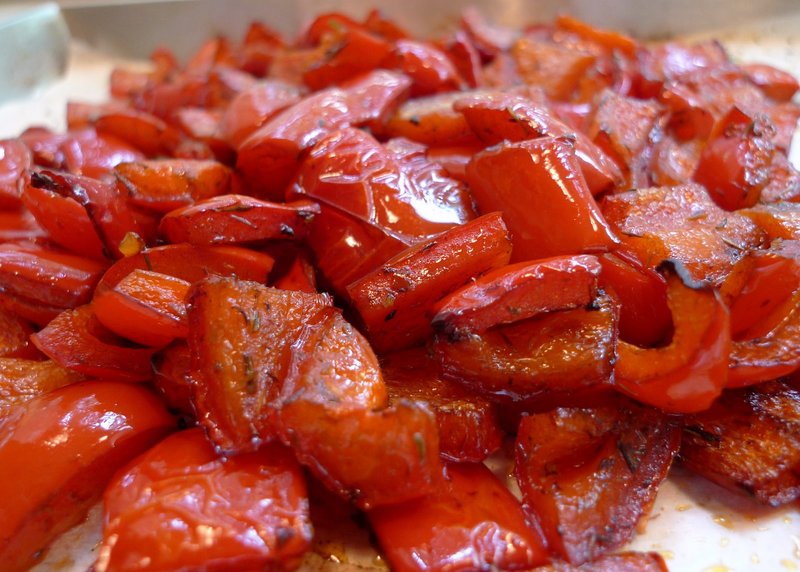 The “secret” to ‘ino’s panini is that instead of using loaf bread they use ciabatta.  Slicing the top off to make it roughly flat, they then slice the ciabatta in half length-wise.  This way each bite has some of the nice crust on the bottom. 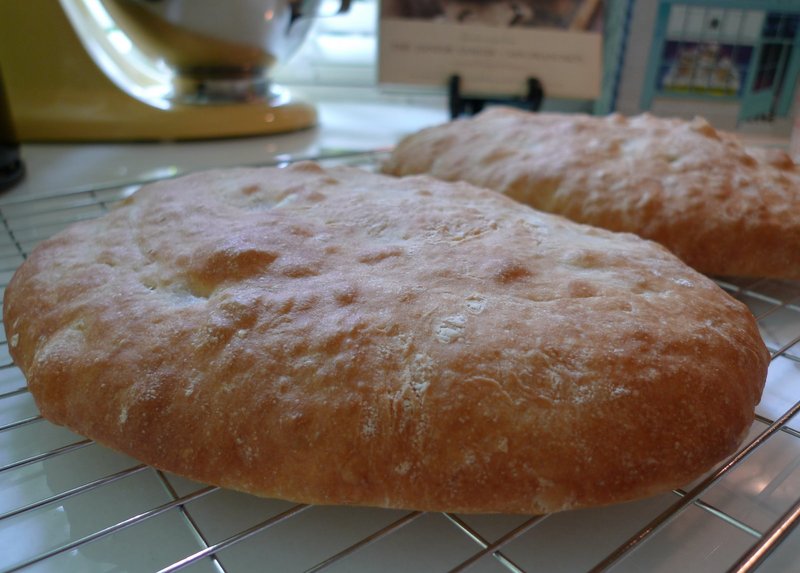 I made a couple of loaves of ciabatti and while the flavor was good, the rise wasn’t as high as I thought necessary and the crumb was very wide with large air bubbles.  This made for a tough sandwich to grill as the fillings just worked their way through the bubbles and out the crust. 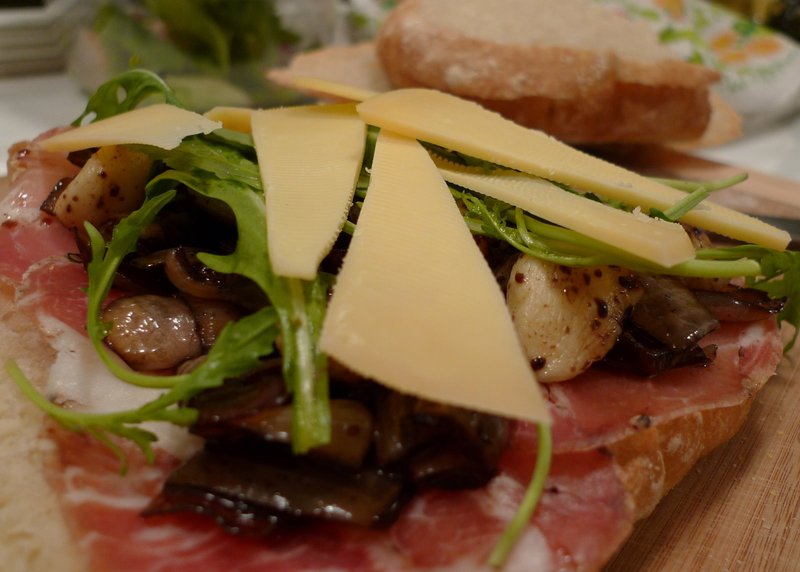 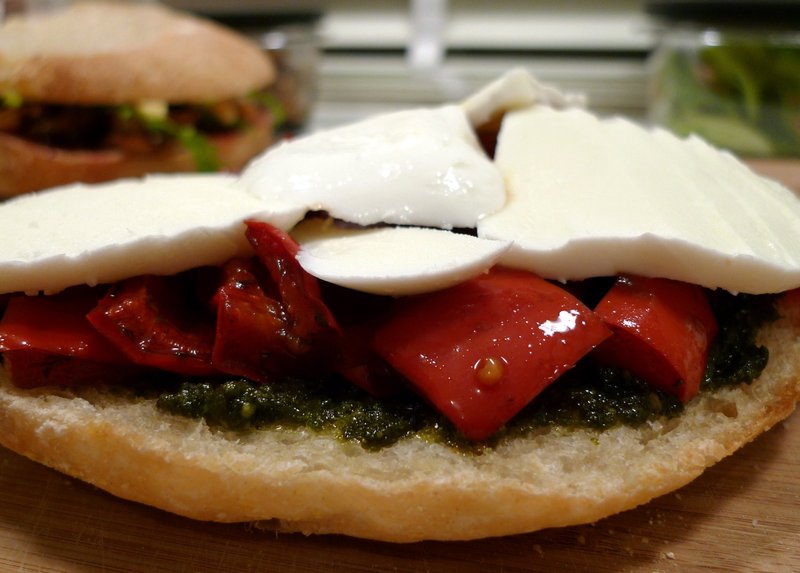 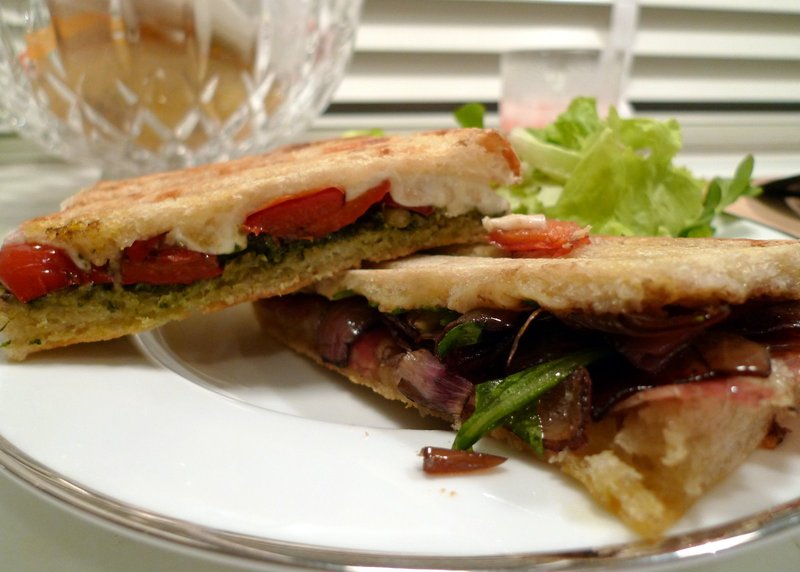 The results: tasty, but a bit flat.  The pesto nearly soaked through the bread. 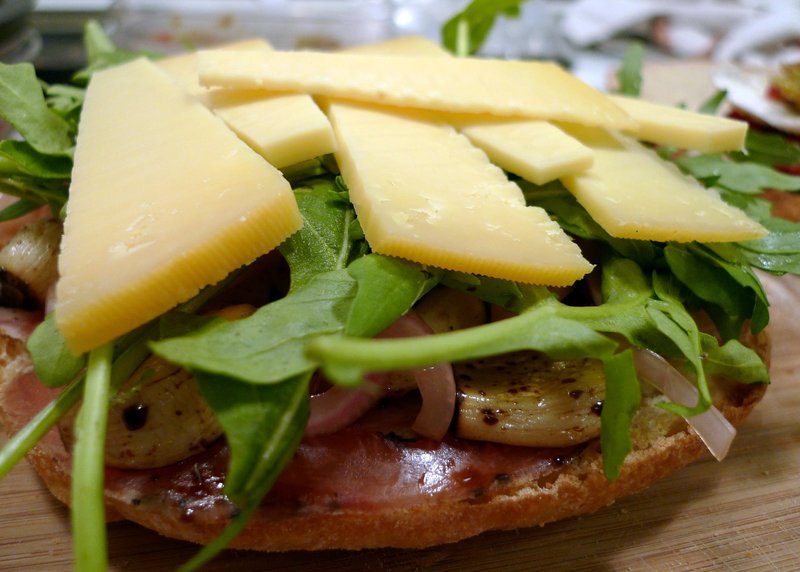 Similar to the first sandwich – except with pickled red onions instead of roasted sweet onions.  More cheese this time as the gouda seems to evaporate rather than melt. 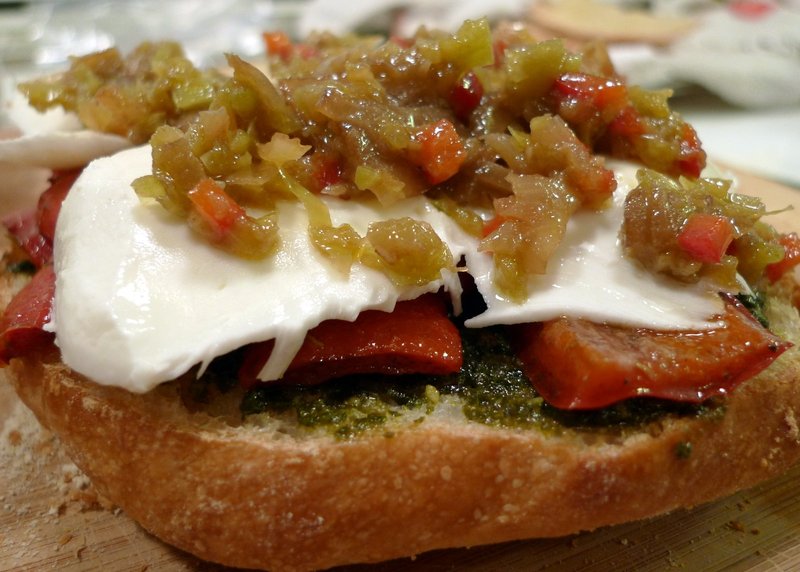 Pesto, peperonata, mozzarella cheese (this time not fresh but lightly aged), with some chile relish for a change. 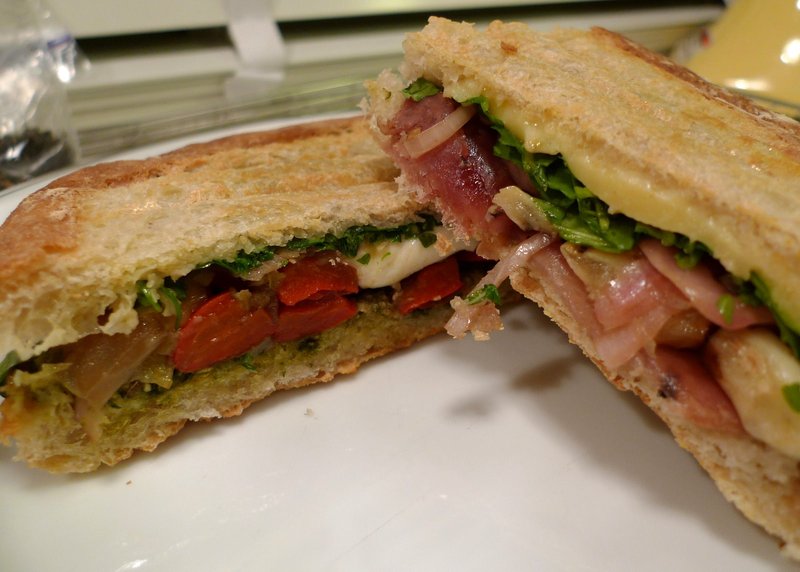 The results were better with this second batch – my ciabatti were higher thanks to folding over the dough several times during the rise.  In this picture, you can see how the rolls have had their tops sliced.  Still, though, the panini end up too flat because the bread just isn’t high enough.

This time a trio of sandwiches using a baguette I baked.  Since I couldn’t get the ciabatta as high as I wanted, I decided to try an alternate style of bread. 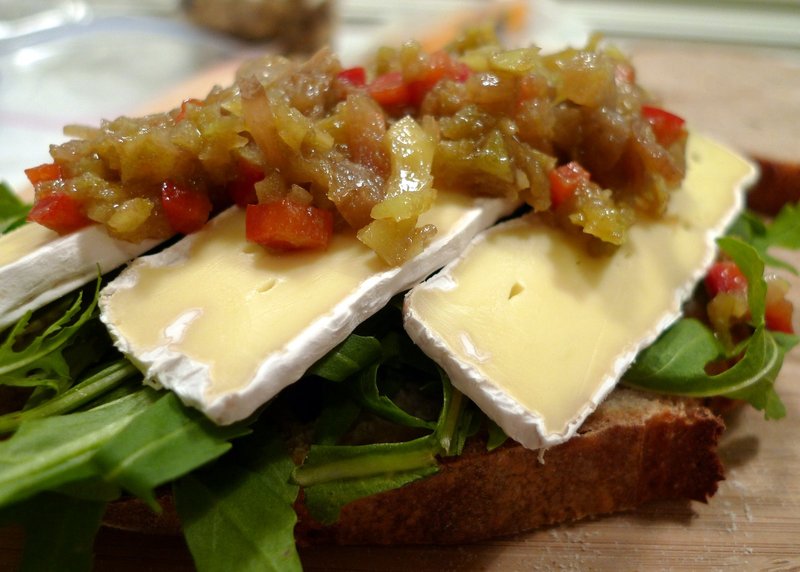 Based on a suggestion from Sheldon (with some modification), here is rocket (arugula), camembert cheese, and the chile relish. A scrambled egg with roasted sweet onions and gouda. A different and prettier arrangement of peperonata, mozzarella cheese, and basil pesto. This trio turned out very nice (accompanied with some of the balsamic roasted garlic) with bread that remained substantial after grilling.  The only challenge was that since the diameter of the loaf is pretty small, there was a lot of crust to deal with.  I love crusty bread but it was sometimes a bit tough on the roof of the mouth to chew!

One thing I’ve decided is that the regular loaf bread like a boule is the most suitable for panini, despite what ‘ino does.  If/when I can make a ciabatti that has enough height or can find a place to buy decent ciabatta, then I’ll switch back to it.  In the meantime, I’ll return to my pale ale boule recipe.

Another pleasant discovery – you can use the condimenti for other purposes. I hope you enjoyed!