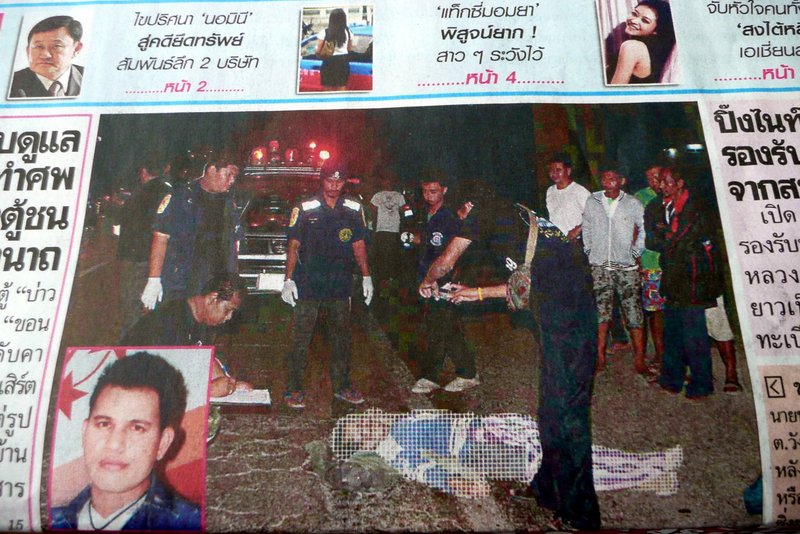 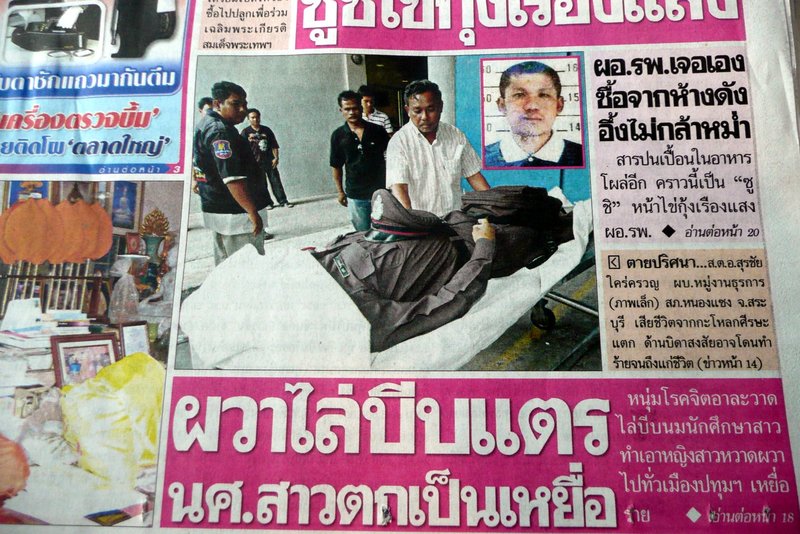 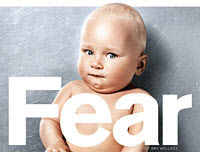 I generally don’t trust the media.  Not because of some conspiracy theory or out of fear that ever-fewer corporations own an ever-increasing share of the media outlets.  My distrust comes simply from the lack of knowledge that reporters and anchors have about the subjects they are covering.

My first realization of this came when I was in university.  While studying, I worked as a manager of a movie cinema.  There was a reporter who came to visit a new cinema that was under construction and subsequently wrote an article about the dynamics of cinema ownership and the distribution of films in a given market.  Reading the article, I was amazed at the number of inaccuracies it contained.  He simply didn’t have a good understanding of what he was writing about and, as a result, the article was flawed.

It occurred to me that if the reporter got something as trivial as an article about the distribution of films wrong, what were he and his peers doing with more important information?

We’re seeing that kind of “getting it wrong” reporting these days about the H1N1 flu shot.  From claims that receiving a flu shot will give you the flu to reports linking flu vaccines to autism to hysteria about mercury in vaccines to, most recently, the claim that a woman developed the rare neurological disorder dystonia from a flu shot, news reporting seems more interested in sensationalism than science, stories over statistics.

At the root of this shoddy reporting seems to be a misunderstanding of correlation and causation.  Just because something happens at or around the same time that something else happens, doesn’t mean one thing caused the other.  If I get a flu shot and a few days later get struck by lightning, the flu shot didn’t necessarily cause me to get struck.  Me standing in the middle of a field during a thunderstorm flying a kite with a key tied on the string may have been the more likely cause.

Why is this important?  Vaccines have played an important role in decreasing illness and death worldwide.  When fears and misinformation about vaccines are encouraged, even ones as simple as the scientifically untrue belief that you can catch the flu from a flu shot, they lead people to make very dangerous choices.

Amy Wallace has written a very interesting article about this in the October 19th issue of Wired magazine.  The article, titled An Epidemic of Fear: How Panicked Parents Skipping Shots Endangers Us All, is well worth a read.

Some people are visual learners.  For those of us who learn best by seeing pictures and graphs, a special thanks to Sion, who pointed me towards an interesting graphic that shows the relative risks assoiated with HPV (Human Papilloma Virus) vaccine, another vaccine about which all sorts of pseudoscience is being bantered about.  Original appears here. 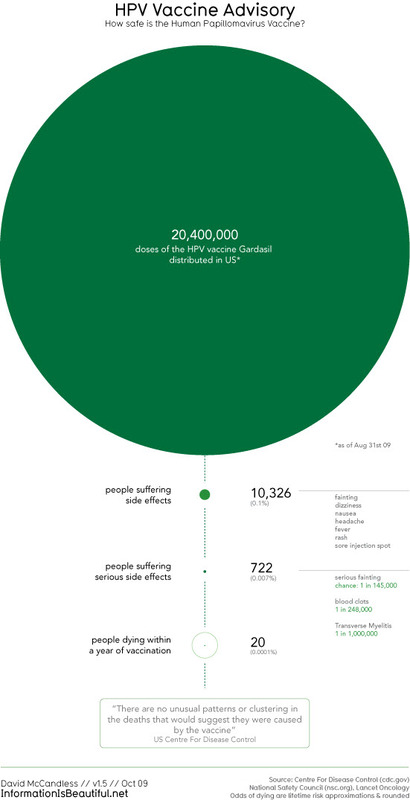 Finally, if you are curious about the difference between correlation and causation, the informative website Science-Based Medicine has an entry containing two videos that explains these statistical terms, and debunks other myths about vaccines, very clearly with hard and fast scientific data.  Worth a watch.

Thanks for letting me rant. 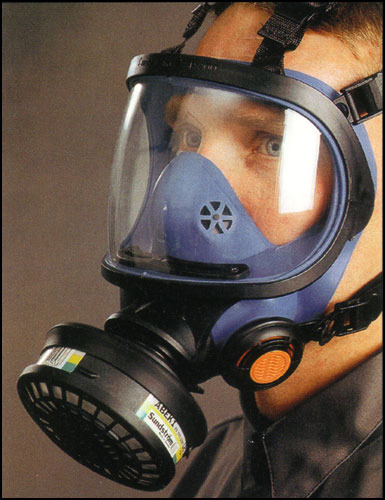 You know, I like a good scare story as much as the next guy, but the headlines in the news today are unconscionable:

People: turn off your cable TV, please.  Each year, an average of 36,000 Americans die from influenza.  For more than a dozen weeks in the winter of 2007-8 the rate of influenza infection was at epidemic proportions.  And yet we don’t see these banner headlines each Autumn.

Let’s get a sense of perspective here.  Yes, the CDC is being cautious.  That’s their job.  Dr. Richard Besser, acting head of the CDC, pointed out in an interview on the Today show that he does not believe the flu has become more dangerous and that even with the seasonal flu, there are some people who are more susceptible to it.  But that note of caution, reason and common sense got drowned out by the drumbeats of sensationalism.

Here is an advertisement from Banco Provincia in Argentina that features a prejudiced old man and a transgendered woman.  The bank’s tag line: “Your life changes when there is a bank disposed to change.”  Initially, I was doubtful, but concluded that there may not even be an ounce of cynical manipulation.  Watch the ad and see what you think.

One interesting note: the man uses the female formal form addressing her.

I fired off a letter to the editor this morning when I discovered that The Nation had used a quarter of today’s front page to give free advertising for the opening of “Chicago: The Musical” in the Big Mango.

Tawn, as a PR professional, admired the success of whichever agency handles that account, but was shocked at how blatant the placement was. 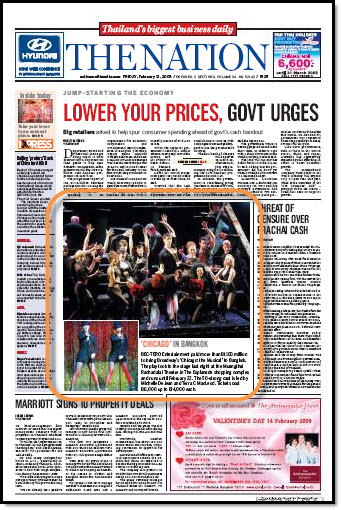 You will recall that a few weeks ago, I took to task one of the paper’s columns, “Ask the Pros”, for asking the owner of a beauty clinic that performs colon hydrotherapy (enemas by another. sexier name) to play the role of unbiased expert in responding to a reader’s questions about the safety and efficacy of colonics.

But this seems to have reached new levels of journalistically unprofessional conduct.  A quarter of the front page with the following caption: “BEC-TERO Entertainment paid more than Bt100 million to bring Broadway’s ‘Chicago: the Musical’ to Bangkok.  The play took the stage last night at the Muangthai Rachadalai Theatre in The Esplanade shopping complex and runs until February 22.  The 50-strong cast is led by Michelle DeJean and Terra C. MacLeod.  Tickets cost Bt1,000 up to Bt4,000 each.”

Now, I want you to know, I am a fan of the musical Chicago.  In fact, Tawn and I are joining a group of friends to watch the show on Saturday.  So it isn’t that I dislike musicals or don’t believe that coverage of a new musical’s opening isn’t news.  I am pretty certain, though, that we have more pressing things to report on the front page.

You may not have heard, but there is actually quite a bit of real news going on here in Thailand:

Any one of these – plus a dozen more – could have provided some much-needed news reporting, investigation and analysis.  But the editors felt that the biggest news in the Kingdom was the opening of an expensive show from Broadway.  One of several shows that open here every year.

I’ll let you know if the editor deigns to respond to my letter.

Borrowing from the entry in Chris Crain’s Citizen Crain blog, news about GetToKnowUsFirst.org, a non-profit organization that created and is distributing a series of public service announcements about marriage equality.

The first round of PSAs, embedded below, ran during the broadcast of the inauguration ceremonies in the 42 California counties (out of 58) that had a majority vote in favor of proposition 8, the initiative that took away the right of same sex couples to marry.

One hitch along the way: KABC, the ABC-owned TV station in Los Angeles, refused to air the ad, saying it was too controversial to air during the inauguration, when many families would be watching.

After a meeting between GetToKnowUsFirst, KABC, and the Gay and Lesbian Alliance Against Defamation, the station apologized for any misunderstanding, revised its previous statement, and has worked to find high-visibility slots for the ad starting this weekend.

Here’s the most notable thing, though.  Throughout the No on 8 campaign, one thing that was noticeably absent was the g-word.  All of the advertising skirted the issue of gay and lesbian people, instead framing it simply as a matter of hate or equality.  This managed to keep the No on 8 campaign from bringing a human dimension to the issue, leaving that ground to the Yes on 8 campaign and its campaign in which little Suzie returns from school and announces that she learned that when she grows up, she can marry a princess.

These are each thirty second spots.  Take a look and let me know what you think.