Each city has its own development  rhythm. Buildings are constructed then subsequently modified or added on to. Sometimes the buildings are torn down to make way for newer buildings. In some cities (think Florence, Italy) the rhythm is very slow. In other cities (Hong Kong!) one can be surprised by how staccato the rhythm is. Here in Bangkok, it is somewhat in between, though closer to Hong Kong than Florence.

A few weeks ago, I noticed that a pair of shophouses adjacent to the Thong Lo Skytrain station (the one at the mouth of our soi) were being demolished. The process took several days and was done largely by hand – laborers with sledgehammers started at the top of the building and deconstructed it, floor by floor. 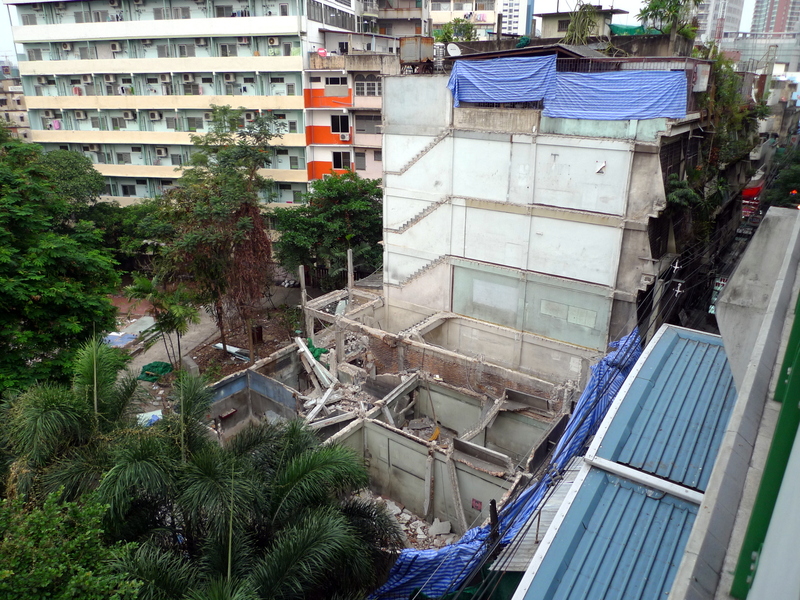 Interestingly, they are not removing the entire row of identical shophouses, just these two. The demolition process exposes the intimate way in which the buildings are connected: ghosts of the back stairs can be seen on the wall of the remaining shophouse. People are apparently still living next door to the demolished buildings: laundry is hanging on the roof area and tarps have been raised to keep the dust out. 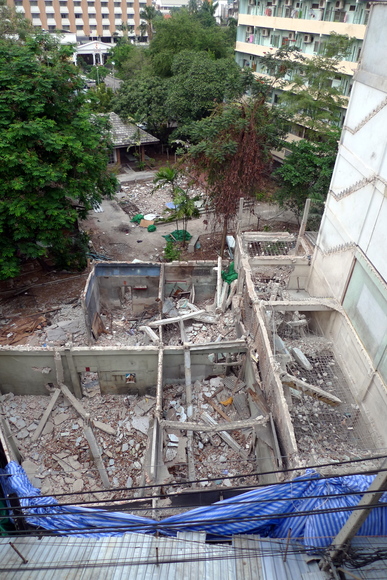 The demolition also exposed a large open space that I never knew existed behind these buildings. It looks like there may have been a small pool back there. As of yet, there are no signs announcing what is to happen with this space. The house to the left is a large private home on a lot covered with a pond and lots of old trees. Behind the open space is a large but shadowy hotel (the orange building) and to the right is an apartment complex (in green). I would guess that these shop houses probably date to around the 1960s so they are being replaced within three generations.

I look forward to seeing what development happens here. It seems too small for a condo – lord knows we have plenty of those sprouting up all around Thong Lo station! – but stranger things have happened. 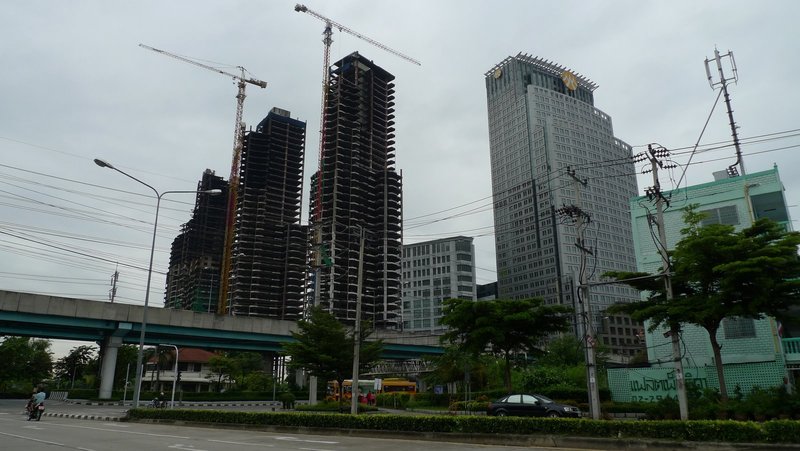 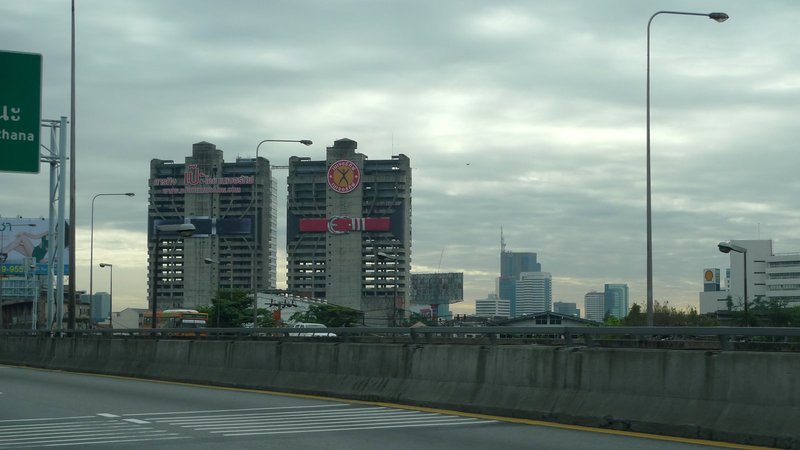 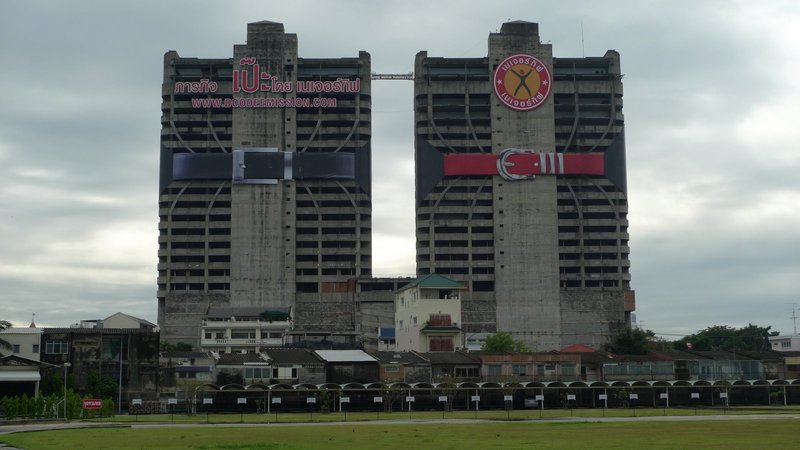 In November 2009 I first wrote about the construction of a new mall at the northwest corner of Sukhumvit and Asoke roads called Terminal 21.  I visited the subject again in February of this year as part of an entry about the profusion of malls being built along Sukhumvit Road.  In the weeks since, I’ve stopped by the site, which is easily visible from the outbound platform of the Asoke BTS Skytrain station, to view the last steps of construction.

Since the mall is literally right next to both the Skytrain station (elevated) and the subway station, it should benefit from easy access.  But, in a city with strong sunlight, heavy rain showers, and lots of traffic, the more convenient and enclosed you can make that connection, the better. 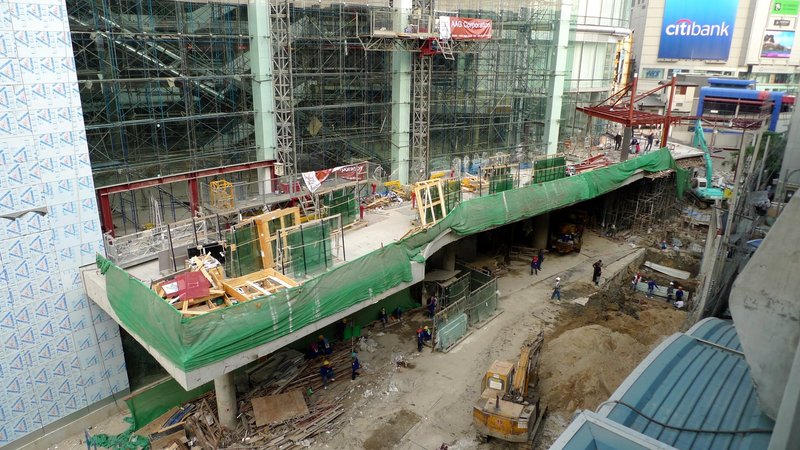 Because of that, one of the things I’ve been observing and thinking about is how the main entry area (shown above) will connect with the two rail stations.  You can see the long concrete deck that will be the main entry area, wrapped in green construction netting.  One entrance is on the left, outlined in red metal beams, and the other is at the right end where there is a bit of a canopy being constructed. 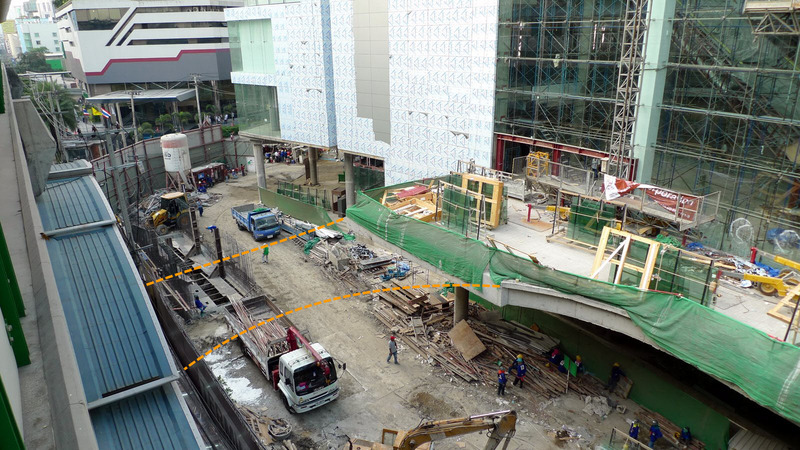 On the west end of the deck, I can easily see how a bridge might be built to connect to the Skytrain station, which has blue-covered stairs seen on the left of the picture.  In this picture, taken a few weeks ago, I anticipated the potential bridge with orange lines. 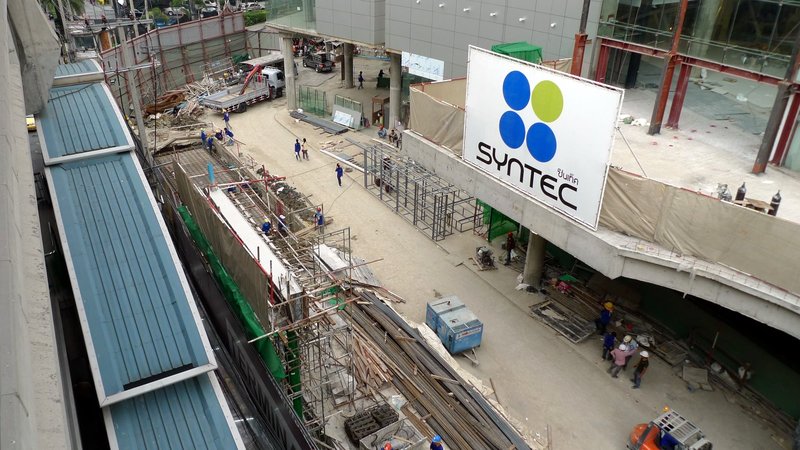 Sure enough, by last week they were pouring the concrete reinforcements for the bridge and I imagine in another week or so they will be laying the beams for the bridge.  This will lead directly to the entrance of the Skytrain station, which I fear is a bit small to deal with the amount of passengers that may be passing through the space. 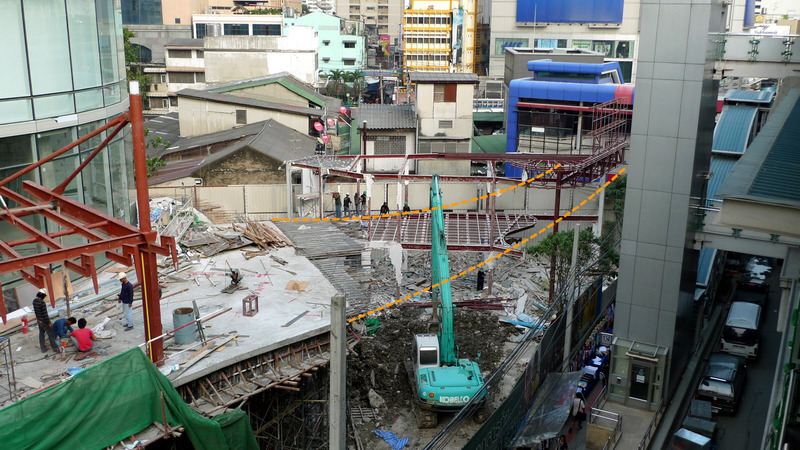 The more uncertain question is what they will do with the other entrance to the mall.  In the picture shown above, taken a few weeks ago, they were demolishing the sales office for the mall and I anticipated (in orange lines) that maybe a bridge would be built connecting to the escalators that descend to the subway.  The escalators are in the building with the bright blue roof that has one red segment.  While some re-jiggering of the wheelchair ramp in that area would be necessary, it seemed to be an easy way to get people directly to the subway, short of a tunnel leading into the station itself. 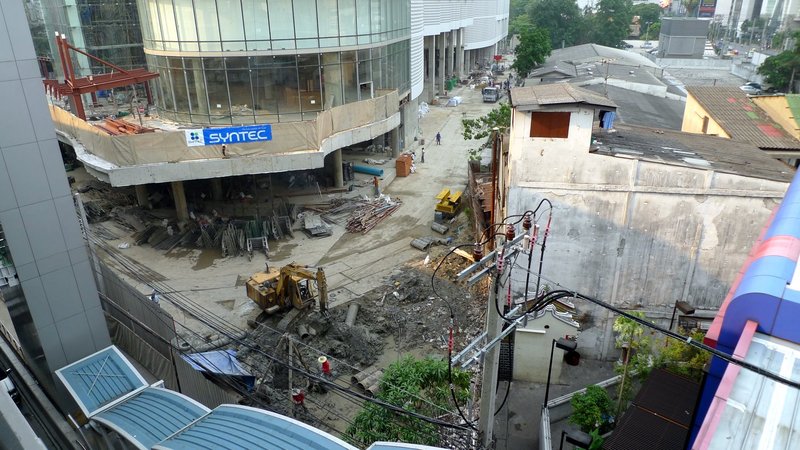 After they demolished the former sales office and finished off the edge of the entry deck, it is no more clear what they will be doing.  Certainly it will be some sort of bridge, but how it connects to anything else remains a mystery.  Complicating matters further, there is a narrow alley you see in the photo above.  This space contains a small shrine that belongs to the Asoke fresh market, located in the building with the dingy white-washed wall.  Any bridge connecting to the escalators to the subway would have to cross over this alley.  I guess there is little to do but wait and see. 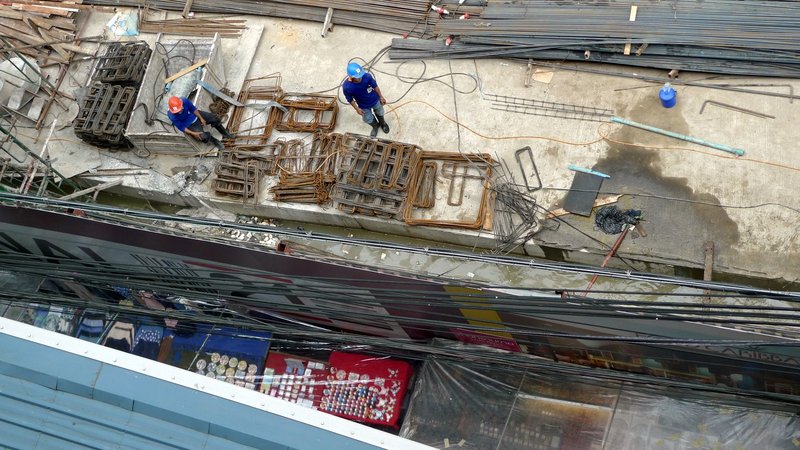 One other thing that caught my eye: there seems to be a “moat” built around the edge of the mall.  The other day there was quite a bit of water flowing down it.  Not sure if this is part of the drainage system and will be covered with grilles or what. 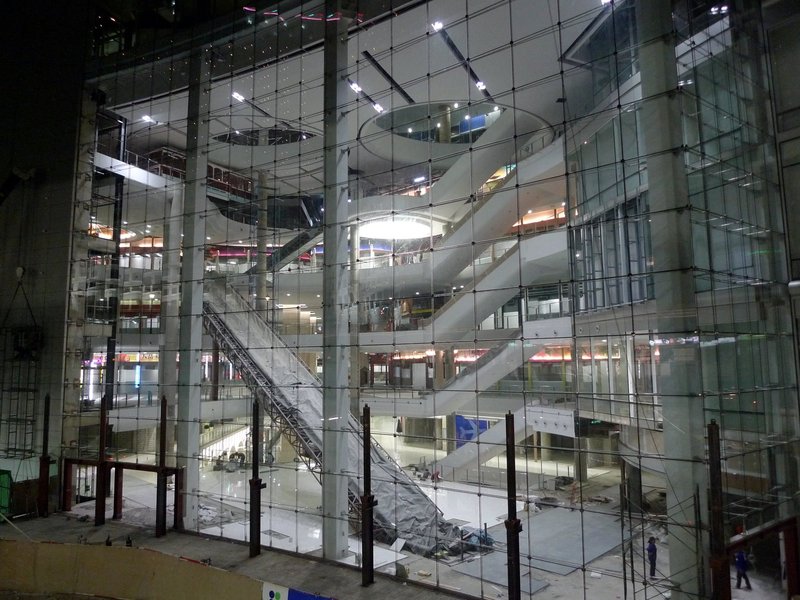 The other night while waiting for the train after my Thai lesson, I noticed they had the interior lights on for the first time.  It may be a bit hard to tell, but the interior is largely finished.  They are laying the tiles on the main floor and most of the shop entrances are decorated already.  I think they will be open in the next few months.

Not that far away from Terminal 21 – in fact, just two subway stops north along Asoke/Ratchadapisek Road – There is another mall being built.  This is Central Plaza Rama 9.  There is an additional development that is supposed to happen behind it – a large four-tower condo complex.  In fact, the developer was floating the idea of building a monorail that would go down Ratchadapisek Road (to the right in the picture above) and connect with the Airport Rail Link terminal at Makkasan.

The view above is looking east from atop Fortune Town IT Mall, with the Thailand Cultural Center off to the left and Rama IX road following the bridge on the right.  Pardon the inexpert job done stitching three photos together to create this faux fisheye lens effect.