My big project the past few weeks has been trying to make s’mores from scratch. S’mores, an American campfire classic, is a sandwich of graham crackers filled with a square of chocolate and a fire-roasted marshmallow. My goal was to understand the mechanics of each of the components, to make each from scratch. All three parts have been added.

The first question I had to answer is, What is a marshmallow? It is one of those questions that I had never considered. Turns out, marshmallows are a whipped mixture of gelatine and sugar syrup. 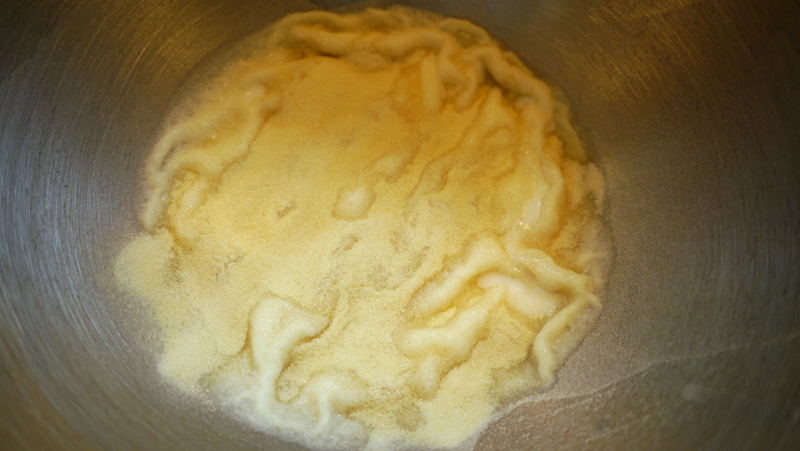 I started by hydrating powdered gelatine in a mixture of water and coconut cream. A previous attempt used passion fruit juice, although the flavor became a bit sour as it cooked. In the future, I would add the juice near the end of the process. This time, I decided to try some coconut cream to see how it impacts the flavor. In the end, I couldn’t really detect the coconut flavor. Will have to play more with flavors in the future. 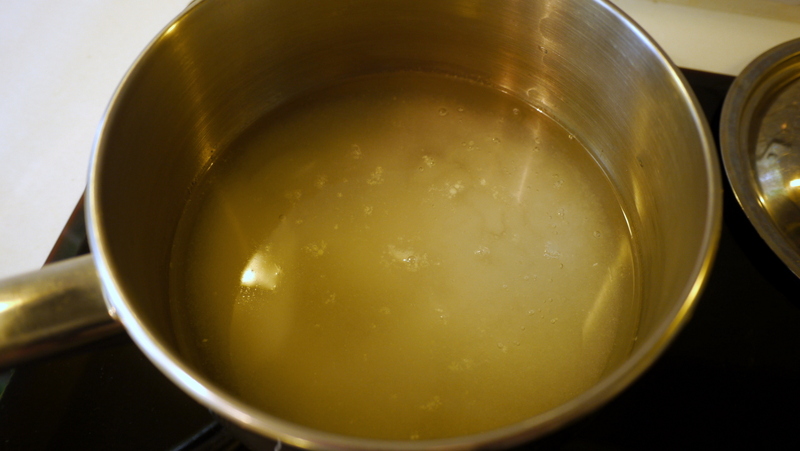 On the stove, I boiled a mixture of water, granulated sugar, and corn syrup. Once it boils, you keep heating it until it reaches the “soft ball” stage – 240 F / 115 C. You have to be super careful as sugar syrup can burn you something fierce. 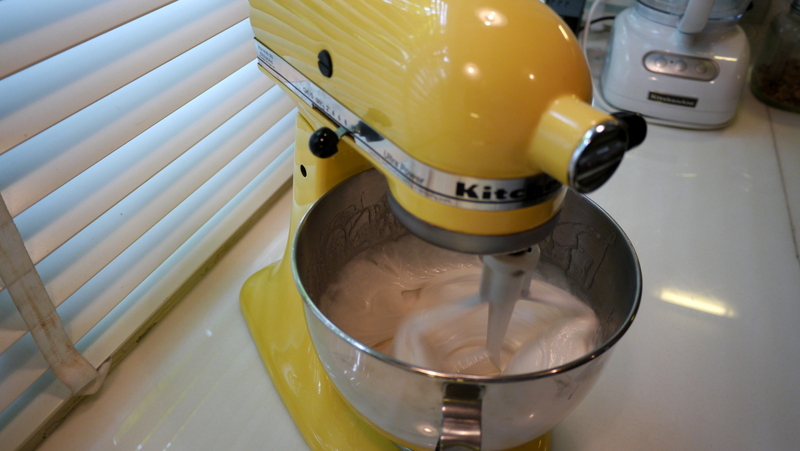 As soon as the syrup hits the target temperature, you drizzle it into the hydrated gelatine as the mixer stirs at slow speed. As soon as the syrup is incorporated, you increase the mixer’s speed to full and whip, whip, whip for about ten minutes. As you whip, the sugar mixture cools and, with the gelatine, starts to stiffen, trapping the air in millions of small bubbles. The more and the faster you whip, the lighter the marshmallow should be. The end result was like a jar of marshmallow creme. 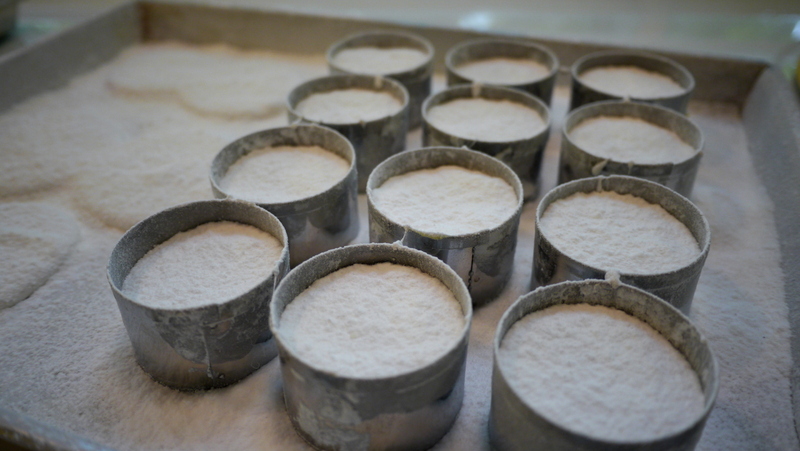 Most recipes call for spreading the marshmallow onto a baking sheet prepared with butter and a powdered sugar / corn starch mixture. I tried that the first time and you wind up with rectangular marshmallows. For this attempt, I used metal rings (also prepared with butter and the powdered sugar / corn starch) and used a pastry bag to pipe the marshmallow creme into the rings. Three words: big sticky mess.

I tried to pipe some of the marshmallow into what I hoped with be small “puffs” but the mixture was too loose and spread into puddles. Lessons learned…

Afterwards, I dusted the tops with more of the powdered sugar / corn starch mixture so the marshmallows’ surface wouldn’t dry. Then I set the marshmallows aside to firm up at room temperature. It can take between six and twelve hours for the marshmallows to finish setting.

To serve a roasted marshmallow without making a total mess, you need something to hold it. The perfect tool: a pair of graham crackers. Graham flour is a course whole wheat flour and graham crackers were originally created as a health product, which they are to some extent – if you ignore the butter and sugar! 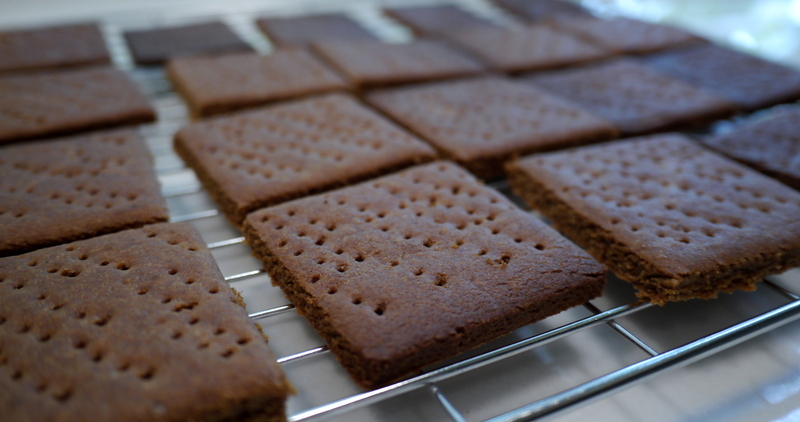 The results of an initial test batch of graham crackers, cut into a traditional square shape. I used molasses as the sweetener, which resulted in a darker dough. The second batch was made with honey, giving them a lighter color. Flavor is really good, especially since I put a good bit of cardamom in.

Here’s the video… hope you enjoy!

Part 3: Putting it All Together

The following morning, it was time to remove the marshmallows from their rings, let them dry a bit more, and then take them to my friend Chow’s house where they would be dessert. 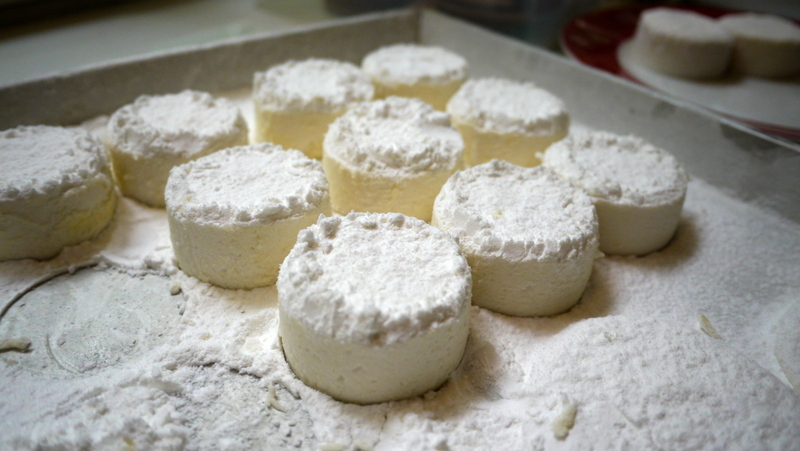 The process of cutting them out of the rings was easier than I anticipated. A sharp knife, cleaned after each marshmallow, freed them from their metal cages. I dusted the freshly-exposed edges in the powdered sugar and corn starch mixture, to prevent them from drying out. 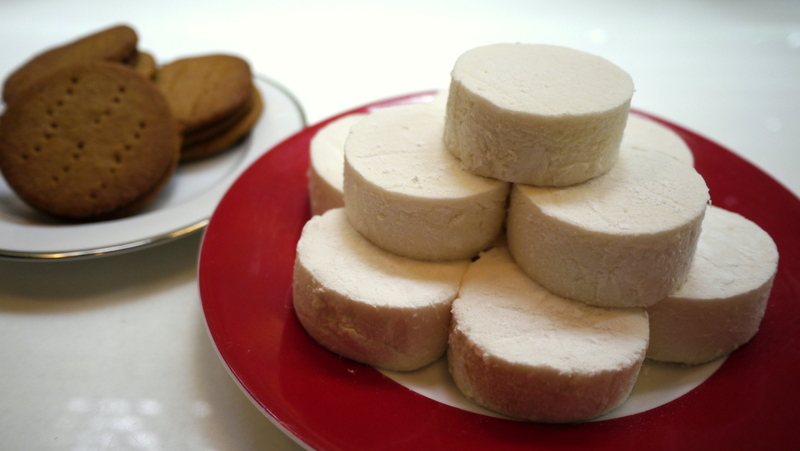 The finished marshmallows, just a little ragged around the edges, and the round graham crackers in the background. They had a really pleasing, spongy texture. Just wanted to keep squeezing them!

That evening at Chow’s, the dishes were cleared, the graham crackers were put in an oven for a few minutes to warm them, and the chocolate ganache was put into a piping bag. Then the assembly process began! Since we had no campfire, I used a small butane torch to roast the marshmallows. The very high heat makes quick work of it, with the exteriors bubbling and caramelized long before the centers. 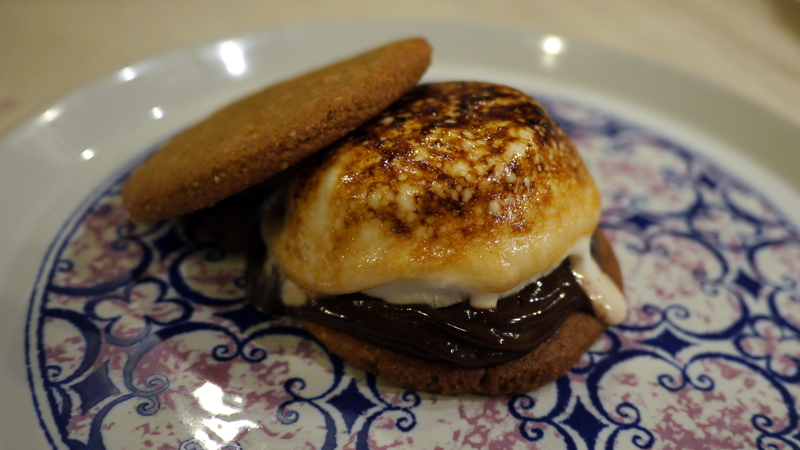 The end result was every bit as sweet and messy to eat as you might imagine. But for folks who grew up eating s’mores after a grilled dinner or while camping, they brought back memories. I’d classify this experiment as a success. I’ll definitely make marshmallows again – probably with my nieces – and homemade graham crackers are super easy to make, especially when you don’t cut them into circles.

Thanks for your patience watching this series and for your feedback and comments.