A few weeks ago I wrote about my participation in Car Free Day 2009.  Some 5,000 cyclists came together for the event.  On my way back from the event, my rear wheel punctured a few blocks from home.  I didn’t have a spare tube handy and needed to go to the bike shop to buy one.  Since I’ve had the bicycle for three years and haven’t yet brought it in for service, I figured I would kill two proverbial birds with one stone.

All I had to do was repair the broken parts on my Thule bicycle rack.

You may recall that in February, Peter, Stuart and I went for a bike ride in Minburi, east of Krungthep, and our ride unexpectedly doubled in length when the bicycle rack failed on the way home.  Tawn drove out in a taxi and took the car and rack home while the three of us rode the extra thirty kilometers back. 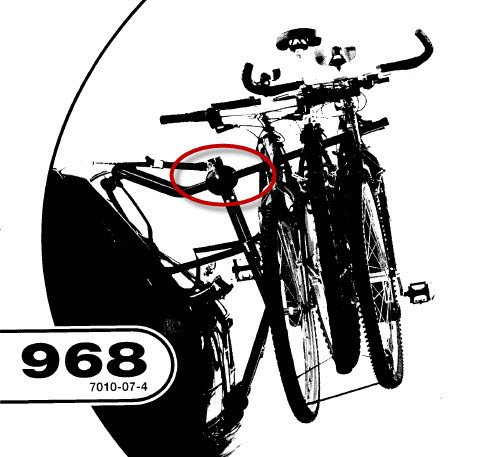 The rack, made by Swedish manufacturer Thule, is the model shown above.  It is adjustable, attaches to the rear of your car, and – according to the picture – can hold three bicycles.  In reality, the plastic pieces that hold the metal arms perpendicular bent under the weight of our three bicycles, causing the rack to collapse and the bicycle tires to drag on the road. 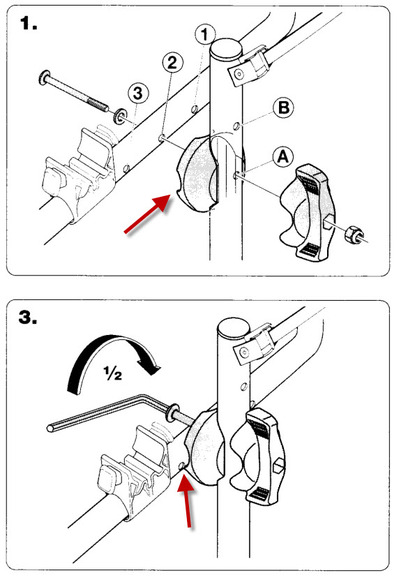 Here’s a closer view of the schematics showing how the metal arms assemble using this plastic disc to hold them.  The arrows indicate the edge that failed.

Not wanting to throw out an otherwise usable (and expensive) piece of equipment, I started the process of finding replacement parts.  Unable initially to find a local number, I tried the North America customer service number, which connected me with someone in Quebec.  He searched for the model number and said it wasn’t in their database.  After taking my email address so he could do more research, Thierry responded a few days later that he couldn’t locate any information for that model.  Dead end.

Asking around at a few local bicycle shops, I learned that Thule actually had a company store in the Central World Plaza mall.  Sure enough, it was an emporium of racks.  Speaking with the person working there, he confirmed that such a replacement part did exist in the system, but it could take more than four months to receive from Sweden.  He told me this in a way that suggested he wasn’t keen to actually order it.

That seemed a bit ludicrous.  I returned to the Thule website and found an email address for a regional sales manager in SE Asia.  After a returned email – “This address not valid.” – I tried the Thule global customer service address.  A few days later a response finally arrived.  It was the form of a carbon copy of a message to another regional sales manager and the person in charge of the local store, gently admonishing them for making it so difficult for me to get the replacement part.

As the regional manager promised, the part was waiting for me four weeks later at the local shop.  The cost – about US$ 4.00 per part. 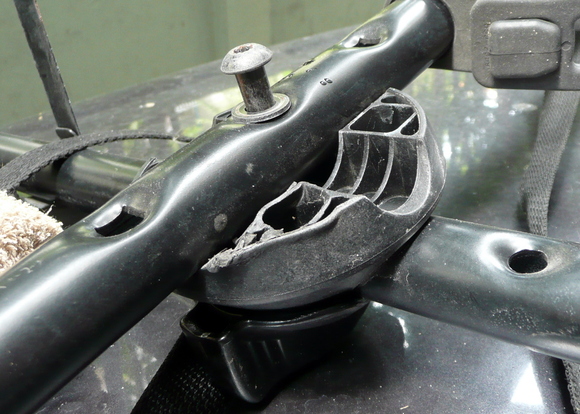 The old part still in place.  Note the damage in the lower left side. 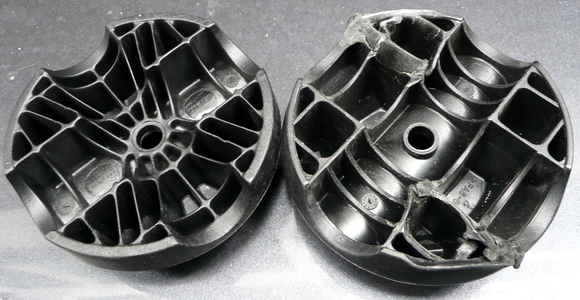 Comparison of the new part, left, and the old part.  Interesting to notice that they actually changed the structural design of the part.  I wonder if this is just a different manufacturing process or a response to a design flaw?

Even thought I received the spare parts several months ago, there hadn’t been a need to transport my bicycle anywhere by car since then.  Now that I had a need, I finally got myself into gear and ten minutes later had changed the parts. 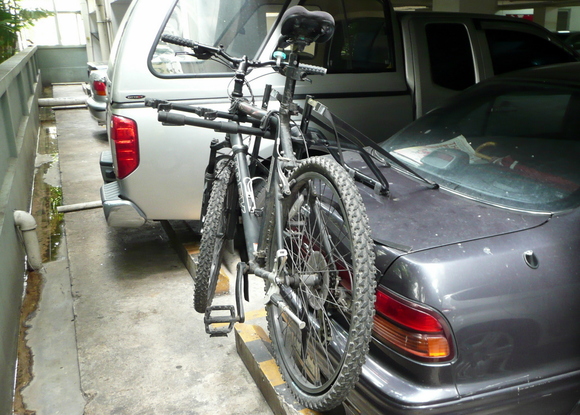 New parts installed, bicycle with flat rear tire loaded up for the drive to the shop. 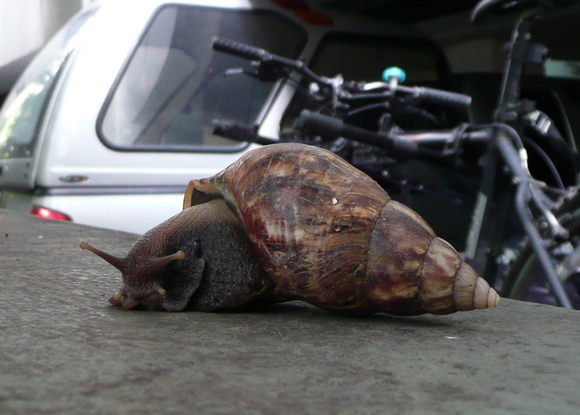 A snail demonstrating the speed at which I would have traveled if I had not had the bicycle rack repaired and had had to walk the bike to the shop instead!

$60 later, my bicycle has been cleaned up, tuned up, had the cables, chain, brakes and sprockets replaced, and is ready to ride again.  And I have a working rack once more. 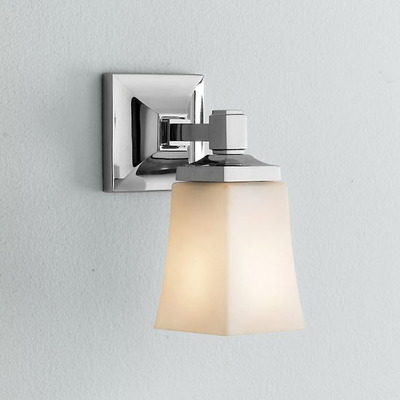 A little bit more about my Restoration Hardware sconce replacement shade project.  The friendly Heather sent me an email, providing the part number for the replacement and told me to call customer service at my convenience and any of the representatives could help.

So I called the toll-free number – which connects to a call center in Tracy, California – and got off to a bad start with the lady who answered.

After explaining what I wanted to do, the lady asked for my original order number.  What?  That was two years ago and 9,000 miles away.  I don’t remember my order number.  Instead of giving me a constructive response like, “Well, sir, why don’t I search for the order in the system… do you recall the address the order was shipped to?”

Instead of saying something like that, she told me that she couldn’t place a replacement parts order without the original order number and then left us hanging in silence.  “What should I do next?” I thought.  My exasperation started to show when I explained the two years and 9,000 miles situation, and she finally remembered her customer service training and asked for my address so she could search for the order.

From that point out, she was actually helpful and friendly enough.  But in the end, even though the part number that Heather gave me is in the system, it shows a zero quantity in inventory, so this lady couldn’t place the order.  After 24 minutes on the phone, the conclusion was that she has filled out some sort of a request for replacement parts that goes to up the decision-making chain.  Supposedly someone will get back to me.

This is kind of an up-and-down saga.  At first, RH was doing a pretty good job in customer service.  Now it has taken a turn for the worse.  We’ll see how it concludes.

You’re going to call me crazy for expecting anything else, but the United States Postal Service just confuses me to no end.  Of the hundred and fifty holiday cards I sent out (yes, by snail mail… call me old-fashioned), I’ve already received four of them back with incorrect addresses.

One of them was from Australia and while the address was correct, the house was new and the owners had not yet installed a mail box out front.  Okay, fair enough. Three of the returned cards were from the United States.  One of them has a sticker that says “Return to sender – attempted to forward, address not known.”  Again, fair enough.  The recipient of the card (Mr. Niwano!) has not informed me of an address change so what can I expect the USPS to do?

(There’s a whole other blog entry on the topic of letting people know in this digital age when your snail mail address has changed.)

But two of the returned cards really confused me:

The first card, the sticker tells me that the forwarding time has expired, but helpfully lists the new address, which is in the same postal code.

Checking with Google maps, it seems that the new address is exactly 2.3 miles form the old address.  So, in their infinite financial wisdom, the United States Postal Service decided to return the card about 7,934 miles (by the great circle route) rather than forward it to an address they have, 2.3 miles away.

The second card, the stamp tells me that they are unable to forward the card.  It seems that I’ve transposed two digits in the house number.  How do I know.  Because some postal employee crossed out the incorrect number (4305) and wrote the correct number (4035).  Then sent it back to me.

Again looking at Google maps, it seems that the recipient’s street is only one block long, so it isn’t like the postal employee had to walk two blocks to deliver it.  He or she already knew the correct address but couldn’t be troubled to deliver it there!

You tell me, please, what exactly I’m getting for my 42 cents.