While our Singaporean friends were in town a week ago, I went with a couple of them to Yaowarat, Bangkok’s Chinatown, for a nighttime seafood dinner. 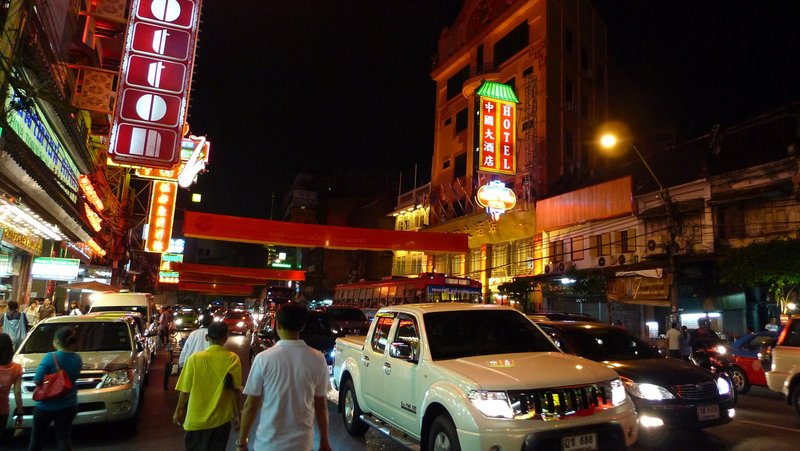 The streets are no less busy once the sun sets as impromptu restaurants – movable feasts, really – open up on the sidewalks.  Seafood is the specialty of the neighborhood, with several well-known sidewalk vendors offering the freshest seafood available in town. 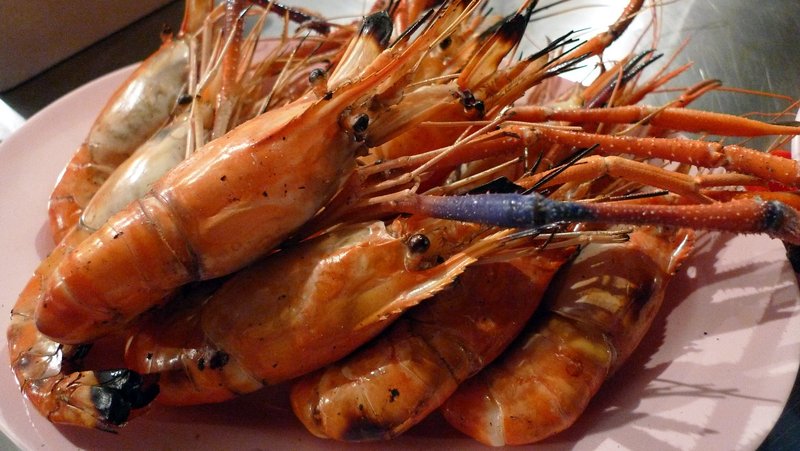 A dozen river prawns, simply grilled.  The flesh was sweet, the only thing needed was some spicy homemade sauce of chilies, fish sauce, and lime juice. 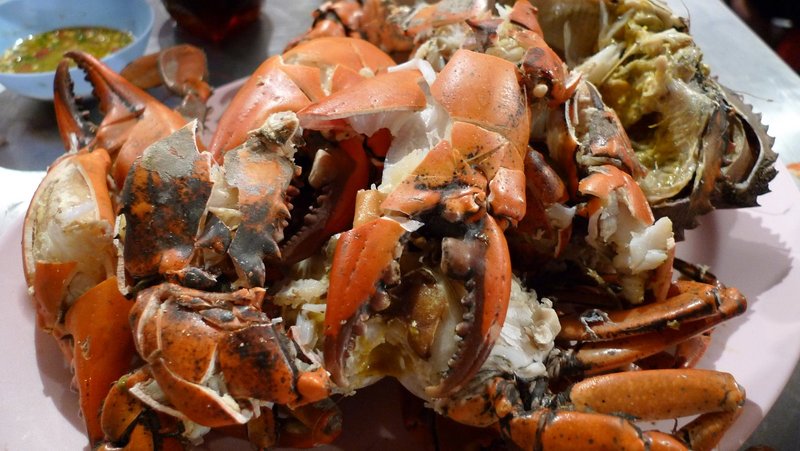 A plate full of crabs, steamed and cracked for our easy eating.  The prawns, crab, and a plate of fried rice were all the three of us needed for a tasty and surprisingly affordable dinner. 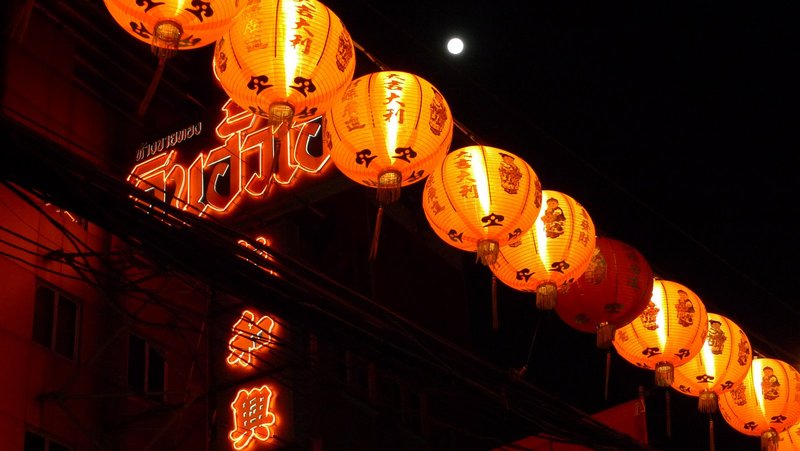 As we finished dinner and headed back to the friends’ hotel, I noticed the moon, just a day or two past full, lost amidst the bright lanterns of Yaowarat.

Like so many cities around the world, Bangkok has a sizeable Chinatown.  Over the past few hundred years, the Chinese has become very integrated into Thai culture and many Thais, including His Majesty the King, have Chinese blood in their veins.  This is especially true of the merchant families, as a trip to Yaoworat – Bangkok’s teeming Chinatown – illustrates.  I had the opportunity this past weekend to join Tawn and his boss for a early morning shopping trip to talat gao – the old market. 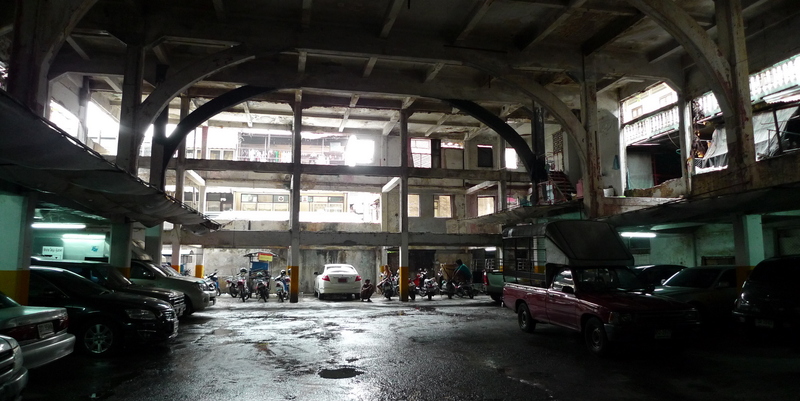 We parked in a gutted theatre that used to stage Chinese operas.  It is interesting as the arches mark the boundaries of the original hall and the backstage area would have been where the white car is parked.  The walls have been removed for ventilation, leaving only the columns and beams. The neighboring balconies and windows now look in on the car park. 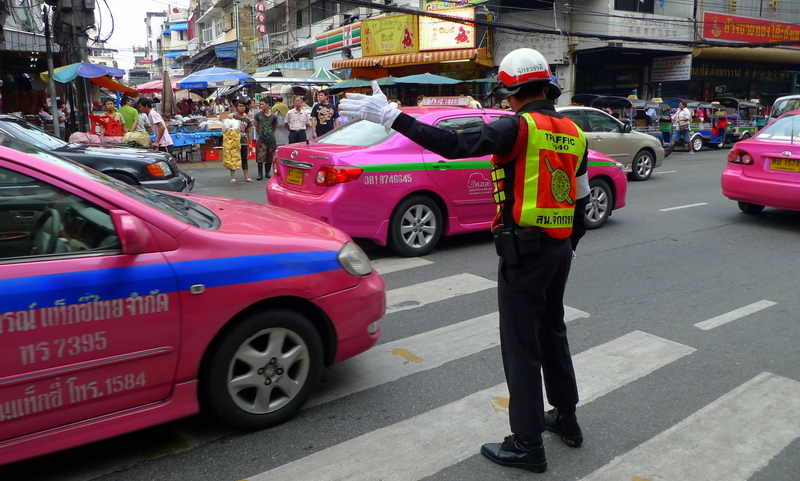 There are two main streets in Yaoworat, both one-way and both very crowded even early in the morning.  Yaworat is located on Rattanakosin Island, the historic center of Bangkok.  When the police officer finally does stop traffic for pedestrians he admonishes them: “Raew, raew, raew!” – “Quickly, quickly, quickly!” 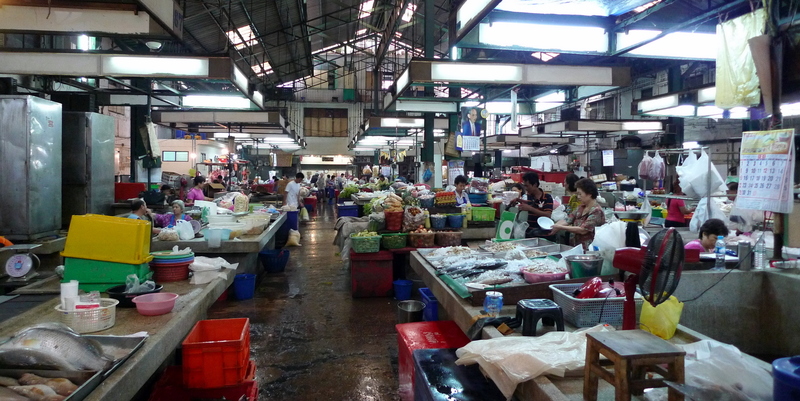 The old market area is a wet market – meat, seafood, and vegetables – located off the street.  It is crowded early in the morning but by 8:00 when this picture was taken, the customers are clearing out and the vendors are shutting down.  This is where Tawn bought a lot of seafood including fresh lump crab meat for one-quarter the price we would pay at our local market. 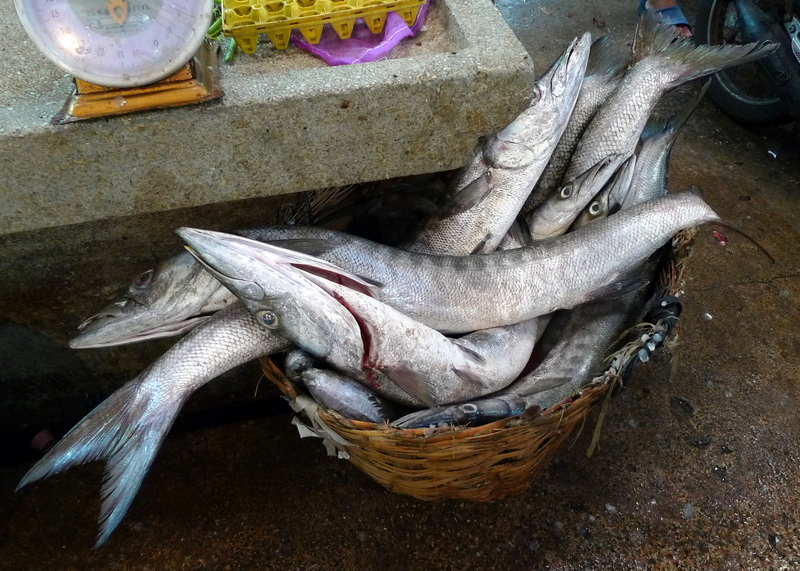 There was still a large selection of fresh fish around, including what I believe are baracuda in a basket. 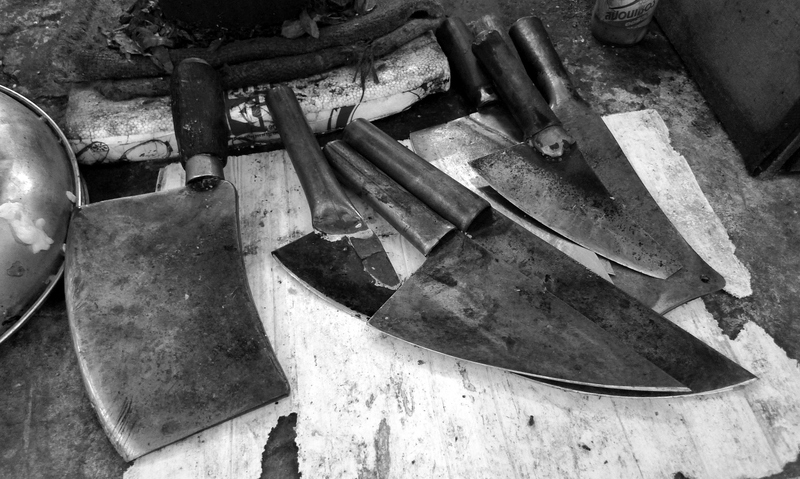 The knives used in the market show their age, having been sharpened thousands of times.  Reminds me of the show Sweeney Todd, the Demon Barber of Fleet Street. 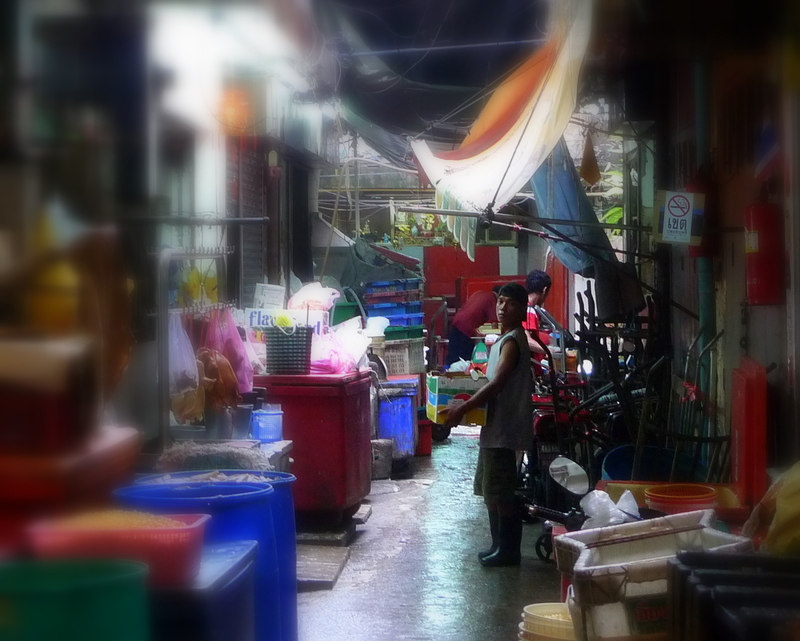 The market has vibrant colors and interesting openings where natural light comes flooding in.  It is a place where you need to be paying attention, with lots of people passing through carrying boxes, pushing carts, and riding motorcycles stacked high with deliveries. 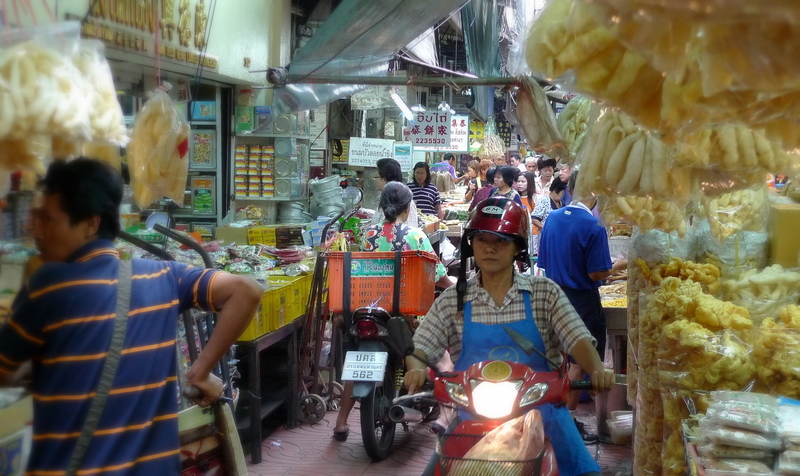 On the opposite side of the street, we explored some of the new market, which focuses more on dry goods and prepared foods.  Any guess what are in all those bags?  Fried fish swim bladders, also known as fish maw. 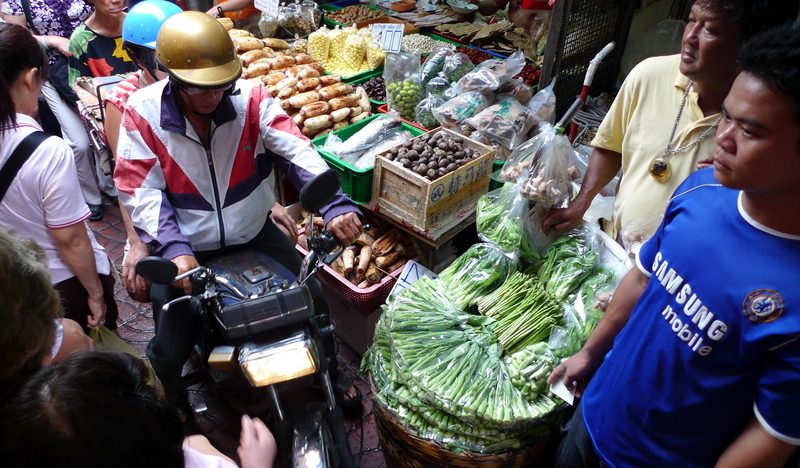 Tight quarters in some sections as motorbikes and pedestrians create traffic jams. 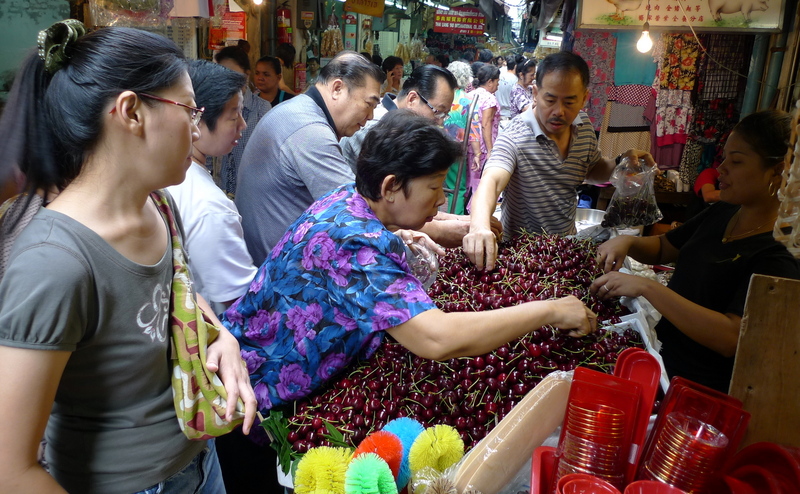 A mad rush for fresh cherries!  The vendor also sells toilet bowl brushes in a variety of colors. 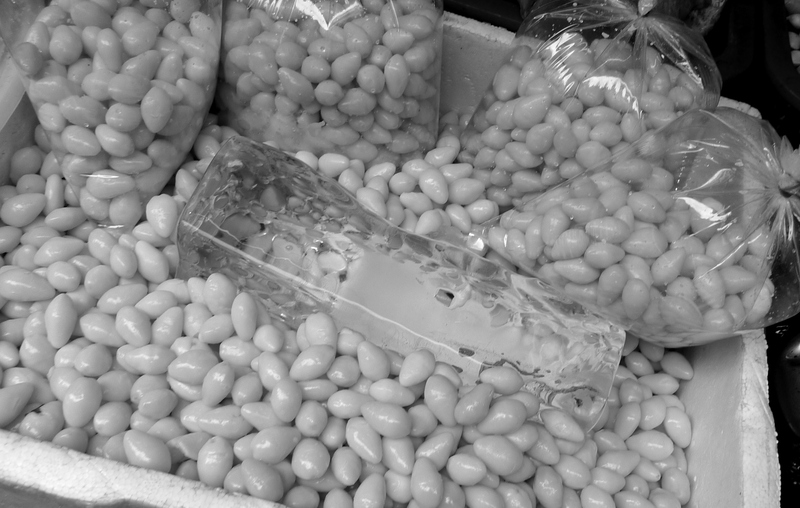 Ginko nuts on ice.  Very nice sweetened in a little sugar syrup and added to my morning oatmeal.  Plus, they are supposed to be very good for your kidneys. 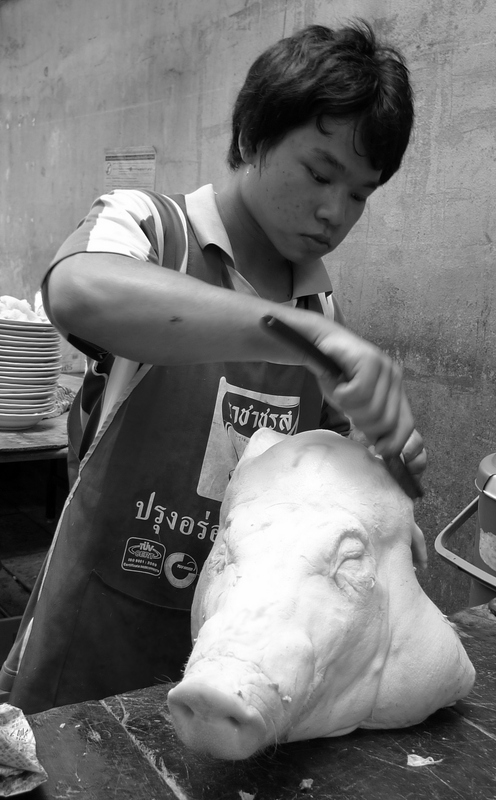 Freshly shaved pig’s head.  You don’t want any bristles before serving this to guests. 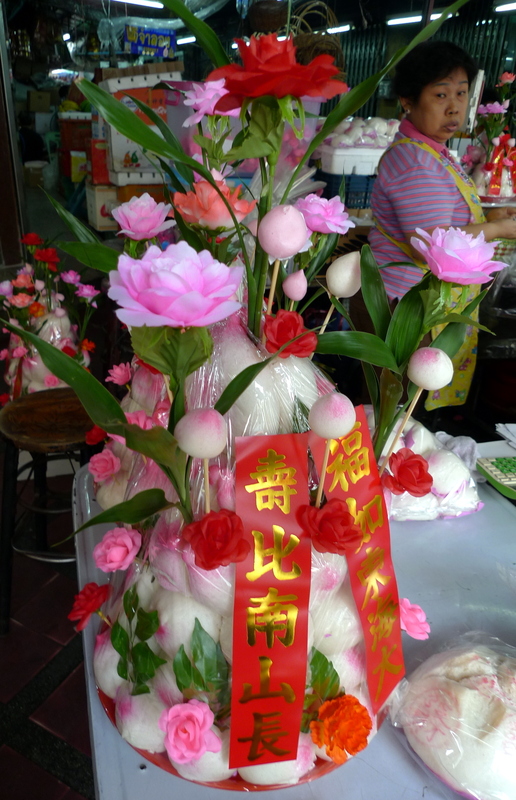 Chinese buns are stacked as part of a good-luck offering. 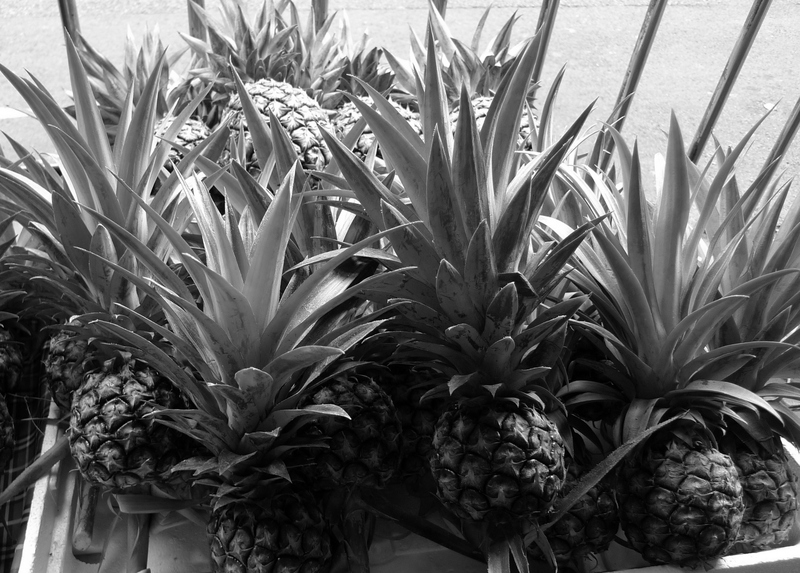 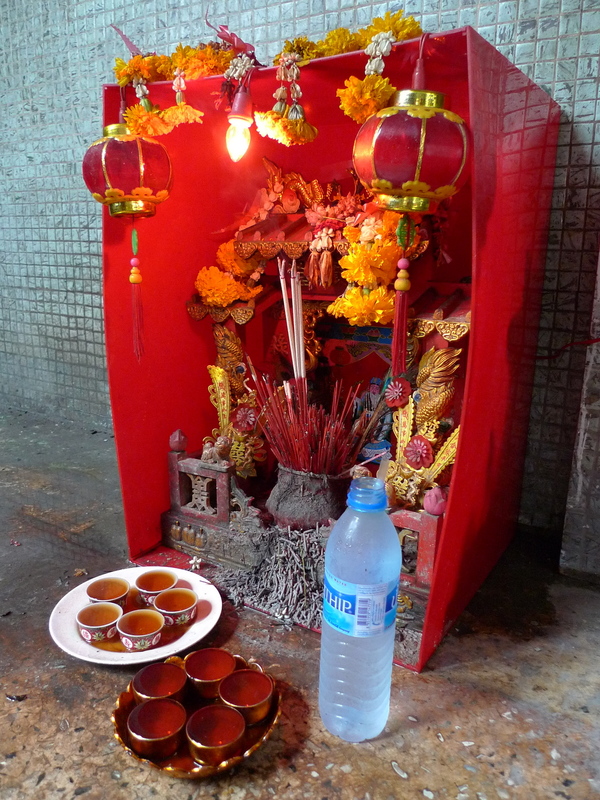 A Chinese shrine located in the car park with tea and water left for the gods.  Note the mound of incense stick ash that has built up at the base of the shrine. 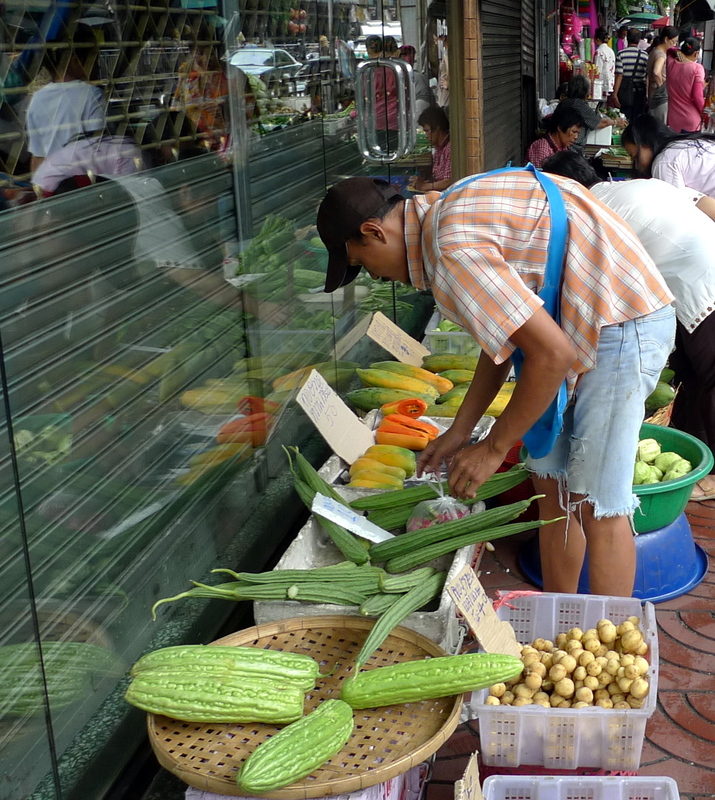 Outside the new market, makeshift vendors line the sidewalks in front of shops that have not yet opened for business, selling whatever items are from their farms (of their relatives’ farms) in the nearby provinces. 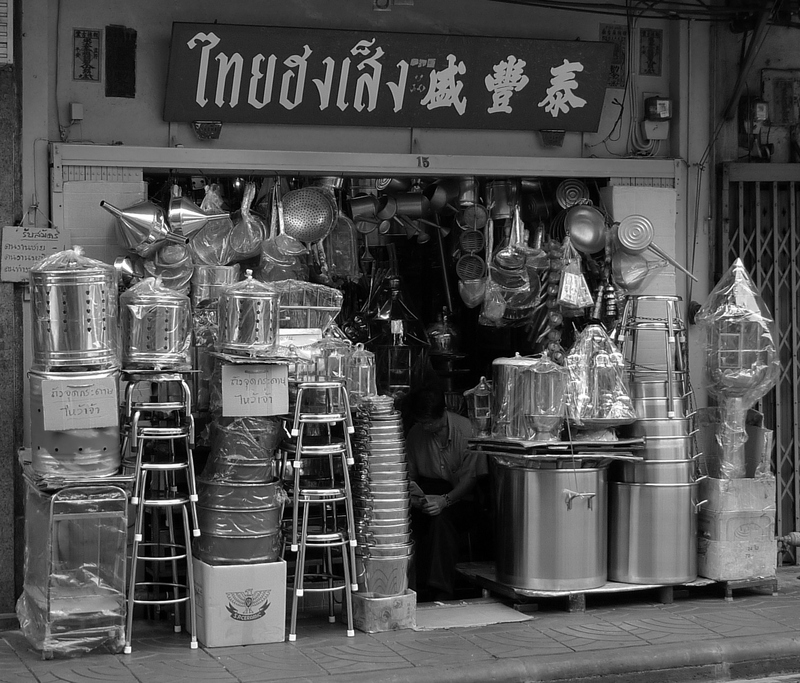 On a nearby street, a shop sells all things steel, from containers for burnt offerings (far left with holes in them) to stools to buckets, to huge stock pots, to funnels, to an oil lamp for use at shrines (far right, wrapped in plastic).  Regarding my earlier comment that many of the merchant families in Bangkok are Chinese, you see signs of this all the time – literally!  Notice that the shop’s name appears both in Thai letters (left) and Chinese characters (right).  Very interesting is that right between the two are some markings made by Buddhist monks to bless the shop.  I’ll have to do a close-up of that one of these days and explain it in more detail. These three-wheel tuk-tuks, when not gouging tourists, haul bulk goods (usually with their purchaser, although not in this case) around the city. Getting hungry, we stopped by a fastidiously clean, freshly painted shop known for its muu daeng – literally “red pork”, which is the barbecue pork often known by its Chinese name charshu.  This man is the owner.  Signs in the building proudly announce that he is now 82 years old and has been in business for 61 years. There’s not much else he serves but the rice or noodles with barbecue pork on it.  This is a plate of “two types pork” – one barbecued and the other roasted with the crispy skin on it.  The sauce, unlike that of many competitors/immitators, isn’t super-sweet and has a complex flavor to it.  He serves it with a slice of soy sauce boiled egg (not the “100-year old egg”) and some slightly sweet pickled cucumbers.  Wonderful, all for about US$1.

So that was my morning trip to the market.  We were home by 10:30, a bit exhausted but with a lot of seafood and other good buys.  I hope you enjoyed coming along for the ride.