We were fortunate to be part of Andy (yang1815) and Sugi’s wedding banquet in Taipei last weekend. Here are some pictures from the banquet (especially the food!), which was hosted at the very nice Regent Taipei Hotel. 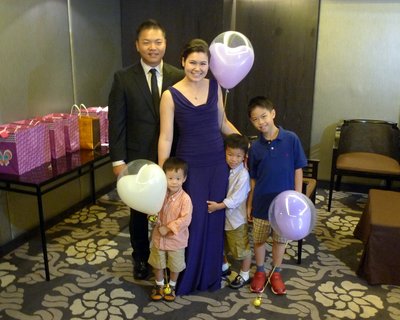 Andy and Sugi pose with their nephews in the greeting room just outside the banquet hall. We had met the middle of the three nephews at the wedding in Maui last year and enjoyed meeting the other two on this trip.

There was a large ice sculpture of two cupids about to kiss, melting quickly underneath the lightbulbs. It wasn’t until the way out that someone pointed out to me that the “male” cupid was anatomically correct and, I suppose, less well endowed after two hours than he was at the start of the banquet.

Andy’s father speaks to the guests while Sugi’s father, Sugi, and Andy sit at the table and await the first course. Chinese banquets are elaborate affairs. Usually about a dozen courses and great care is taken to choose the best (read: “expensive”) ingredients as a matter of showing a good “face” to the guests. The Yangs certainly were outstanding hosts as this was one of the finest banquets I’ve attended and every course was impressive. Here they are in the order they arrived. 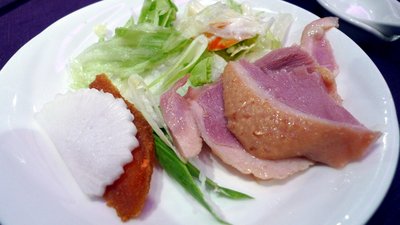 The first plate (everything at this banquets was plated for us, not served off common platters) was an appetizer salad of smoked goose breast. The orange ingredient is a kind of solid “cake” of fish eggs, if I understand correctly, the saltiness of which paired nicely with the tender, smoky goose. 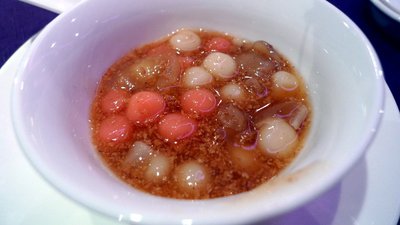 The next course was a small bowl of slightly sweet mochi (sticky rice) dumplings with longan fruit. This was an interesting dish that is similar to desserts I have eaten in Thailand. It seemed strange that something dessert-like would be served as a second course, but the dish was tasty. 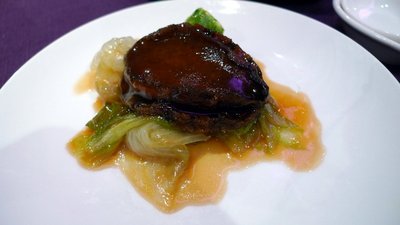 Third course was abalone. This is one of those big-ticket ingredients that impresses guests and this particular succeeded in doing so. The abalone was tender and flavorful, a really good example of why the price tag is so high. 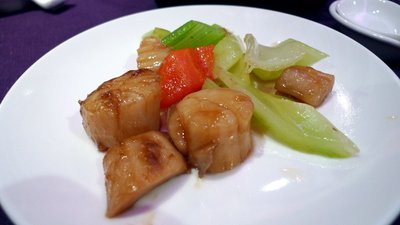 The fourth course was braised scallops. In general, scallops are one of my favorite ingredients and these particular scallops were cooked really nicely. 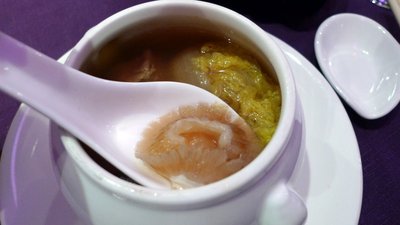 The next course was shark’s fin soup. Yes, this is an unpopular ingredient these days as most shark fins are harvested in a horrific manner. While I don’t know the source of these particular fins, I can say that this was the best shark fin soup I’ve had. Normally, the fins are cut into very thin strips and the broth is murky with cornstarch. This was a clear-broth soup and the fins were in large pieces. A good example of why this dish is considered a must-have on Chinese banquet menus. 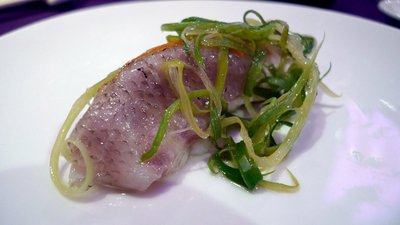 The sixth course was steamed sea bream with scallions. Chinese know how to cook fish and this captured the reason why: steaming keeps the fish moist, captures all the sweetness of fresh seafood, and avoids overcooking. 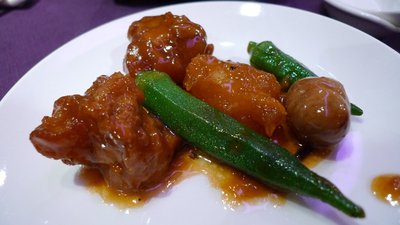 The seventh course was braised pork tendons with okra and chestnuts. The gelatinous texture of pork tendons doesn’t appeal to everyone, I’m sure, but it is hard to beat the flavor! 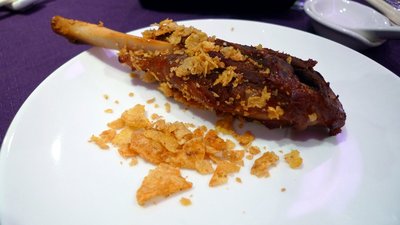 The eighth course was something I’ve never seen before, a pork chop that has been cooked confit style and crusted with what I swear were Doritos and corn flakes. The meat was tender and very tasty. Definitely unusual. 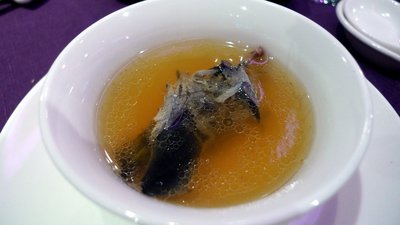 The ninth course was a chicken soup made with “black bone” chicken. This type of chicken has black skin but tastes like any other chicken. One truth, though, is that chickens in Asia (in general, and Taiwan in particular) are so much tastier than the chickens in the United States. The broth had the type of flavor that you always imagine chicken soup should have, but rarely does. 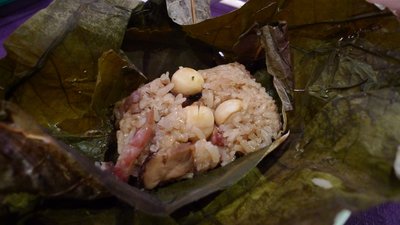 The tenth course was a small bundle of glutinous rice with Chinese sausage, mushrooms, and lotus seeds, steamed in taro leaf. This is a dim sum staple and provided a little starch to help fill you up, just incase the previous nine courses had left you hungry! 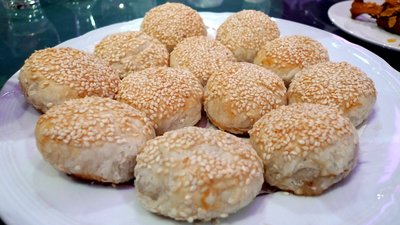 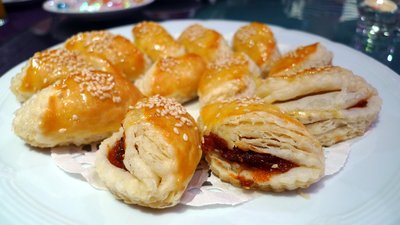 The eleventh course (the first dessert course) was actually two types of pastries, the left one filled with sweetened daikon radish and the right one filled with barbecued pork. These are familiar to anyone who goes to dim sum. 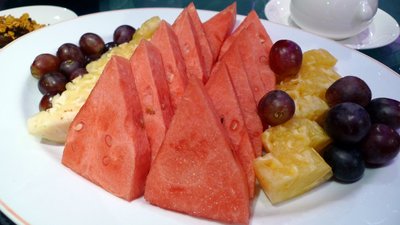 We concluded with a platter of fresh fruit, something sweet but refreshing to conclude the banquet. By this point, nobody had the appetite to do more than just nibble!

Congratulations to Andy and Sugi and thanks to the Yangs for their very generous hospitality! 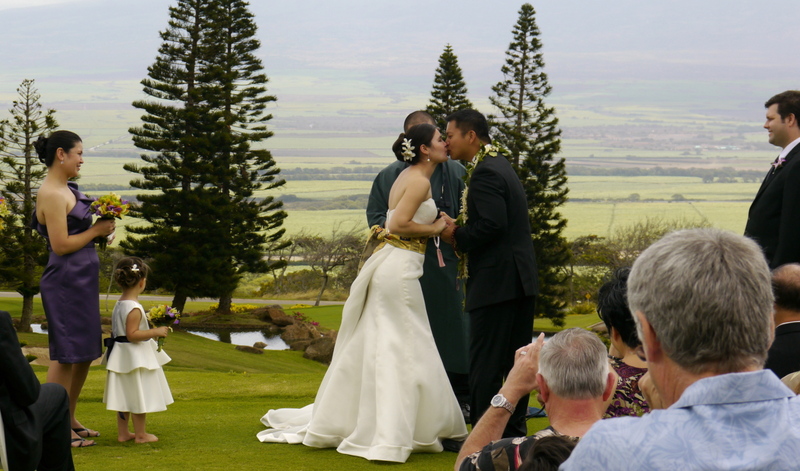 Aloha from Maui! Yesterday we attended the wedding of Andy (known on Xanga as yang1815) and Sugi. More on that later but for now, we wish them a long and happy life together!