An interesting article appeared in the New York Times this week about a trend of some coffee shops not offering seating – standing room only – and trying to make the space more about the coffee and the other customers than about hunkering down, plugged into your iPhone, iPad, and iPod.  This spurred some thoughts and I beg you to bear with me as I bring them up in the disjointed manner one might expect after having had a double espresso on an empty stomach.

First, a few excerpts from the article, to give you the general idea of it:

At times, the large back room at Café Grumpy in Greenpoint, Brooklyn, has so many customers typing and wearing noise-canceling headphones that it looks like an office without the cubicles.  A second Café Grumpy location, in Chelsea, prohibited laptops after too many customers ran extension cords across the room. …

When Café Grumpy’s owners … decided to open a third location … they built a solution to the laptop problem right into the design. The furniture consists of a counter in the back and a chest-high table in the front. …

“I don’t think I’d ever do a bigger space with tables and chairs again,” [one of the owners] said. “I appreciate the idea of when you go someplace and it feels like a home away from home, but I don’t think it should be a home office away from home.” [emphasis mine] 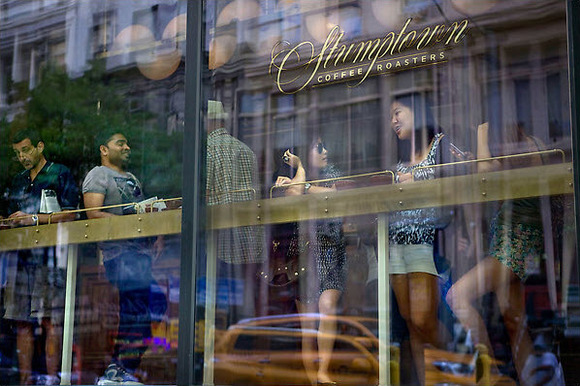 Earlier this summer, the Bluebird Coffee Shop in the East Village replaced half its tables and most of the chairs with two counters and a few stools.  “A coffee shop should be a place to meet your friends and hold conversations and cultivate ideas instead of — I’m going to get in trouble for saying this, so I have to be careful — instead of sticking your head in a laptop,” said [Bluebird’s owner].

Years ago, just as I was starting university, coffee shops were starting to come into fashion in the US.  Starbucks was around, although not as ubiquitous as it is these days.  I remember reading an in-depth article about the concept of Third Places, an article that contributed to my interest, and my brief majoring in, urban studies.

Third Places are informal public gathering spaces that offer a balance between the spheres of home and work, the first and second places, respectively, in our lives.  Just as a tripod offers more stability than a bipod, the third place can serve to keep us from falling into a mental trap of “home to work and back again”.

The article, and many like it, identify examples of third places such as the cafe in French culture, the corner pub in the British Isles, and the espresso bar in Italy.  Places that serve to anchor neighborhood life.  The underlying thesis of the article was that the overall quality of life in a society is better when there is such a third place and declines in the absence of such spaces. 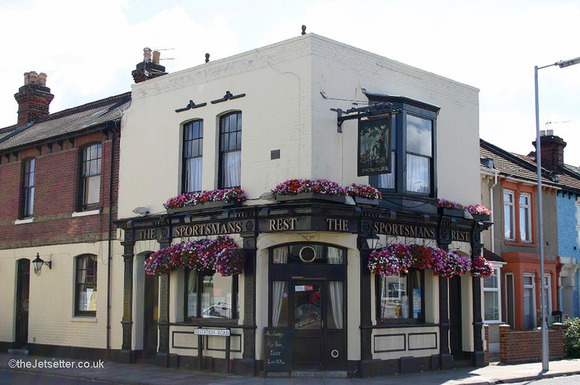 The corner pub has served as a third place in Britain

Do We Actually Have Third Places?

I’ve observed is that we’ve built a great number of spaces that are designed to look like third places – indeed, Starbucks’ founder and CEO Howard Schultz (no relation) acknowledges that as one of the omnipresent chain’s motivations.  But these spaces don’t actually function as true third places.

How many of you go to a business like Starbucks regularly enough that you know the employees who work there, but don’t know any of the other customers?  There are certainly many small businesses within walking distance of my house (including a Starbucks, I type a bit guiltily) where I recognize the staff but none of the patrons.

The element that is missing from our pseudo third places is our interaction with our neighbors, the other customers in the place.  Some of that may be because the third places we visit are largely outside of our neighborhood, often on the way to (or nearby) work.  That begs the question, are they really third places in the true definition of the word?  They cannot anchor a neighborhood if they are not in your neighborhood.

As an aside, I have to wonder whether the increasing political polarization in the US is due in some small part to this lack of third places in which we interact with our neighbors.  When we don’t know our neighbors, much less have the opportunity to interact and converse with them, what hope is there of having a civil dialogue about the issues of the day?

What About My Third Places?

About a five-minute walk away from my home, at the mouth of the soi (alley) where I live, there is a small corner spot that is a small, failing Japanese bar.  It is steps away from the entrance to the Skytrain station, near a busy intersection, and across the street from a private international school.  It strikes me that it would be the perfect location for a coffee bar that the NY Times article talks about.  Being at the gateway to my neighborhood and just next to a transit station, it would be the ideal crossing path for neighbors.  I don’t know if it would work financially – there are a lot of factors at play here – but in terms of being an effective third place, it would be well suited.

Another possibility is one of two small retail spots on the street level of my 8-story condo building.  It is currently empty but the juristic board says that a lease has been signed for someone to open a small cafe of some sort.  That would be an ideal third place, right?  Go down for a morning coffee, meet and chat with my building’s neighbors and other people in the neighborhood.  We’ll see if it works out like that. 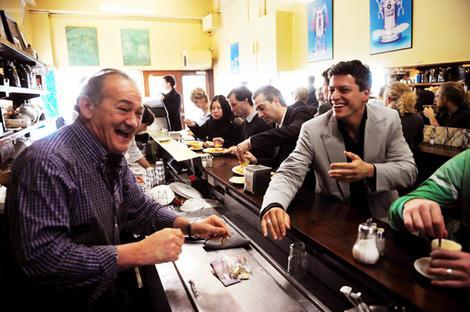 Somewhere in my mind, I imagine either patronizing (or owning) a place like the one pictured above.  An espresso bar that is crowded with people from the neighborhood, getting their coffee, chatting for a bit, and then going on their way.  Somewhere warm and convivial.

What about you?  Do you have a third place?  Do you see an absence of third places in our societies?  And what do you think about coffee bars without a place to sit down and plug into your digital devices?