Despite Prime Minister Samak’s being removed from his post by the courts, despite former Prime Minister Thaksin Shinawatra being convicted in absentia and sentenced to two years in prison for tax evasion, the anti-government People’s Alliance for Democracy (PAD) continues its protests.

It seems they will only be satisfied when the current government is disrupted and new elections are called – assuming they were sincere when PAD leaders recently dropped their demands for a parliament that was contained a majority of appointees, resulting in a government that would be (ironically, given their name) not democratic.

Another big PAD rally and march occurred today, heading down Phloenchit/Sukhumvit Road from Siam Square to Phrom Phong.  (Come to think about it, this could be called the Mall to Mall March.)  Originally, the march was to terminate at the British Embassy on Wittahyu Road but it looks like they kept on going, stopping only once heavy rains commenced.

As I left my Thai language class with Khruu Kitiya, the head of the protest was just arriving at the Asoke Skytrain station.  Caught up in the excitement (and lack of policemen in their mob control gear) I decided to risk life and limb to bring you, my readers, the story. 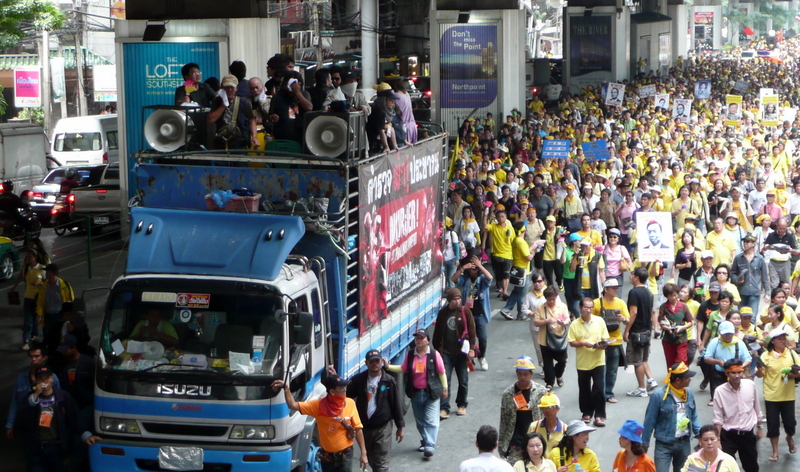 Above, the head of the marchers, underneath the Asoke Skytrain station heading into the Asoke-Sukhumvit intersection.  The crowd looked to be about 5,000 – 10,000 strong but the rains about thirty minutes later cut that to just a few thousand. 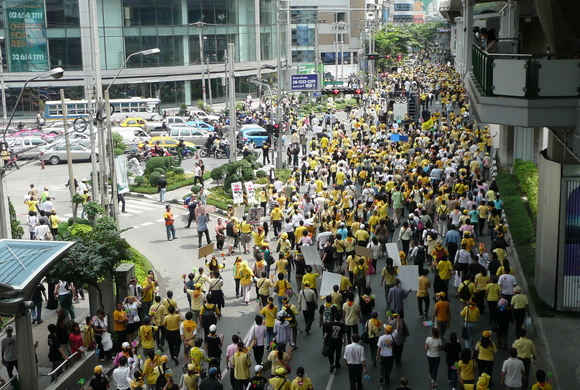 Above, looking from Asoke station eastwards towards Phrom Phong station (where Emporium mall is located).  By the time the crowd had passed the intersection – a good fifteen minutes – the traffic backed up on Asoke reached a solid two kilometers to Phetchaburi Road and beyond. 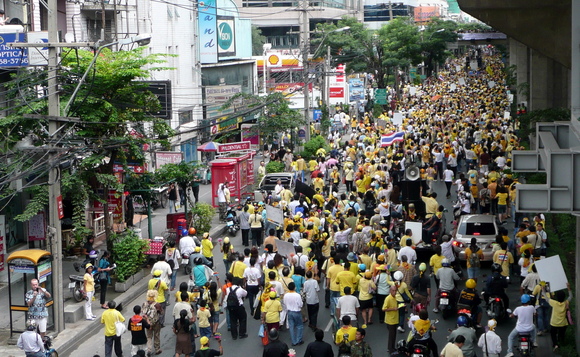 Above, a close-up from the previous vantage point, showing the crowds already down several blocks,

After taking the train into town to pay my electricity bill, I stopped at Emporium on the way back for a bite to eat, where I caught up with a rain storm and about two thousand remaining PAD members, who sought shelter beneath the Phrom Phrong station, stopping traffic on both sides of the street, below. 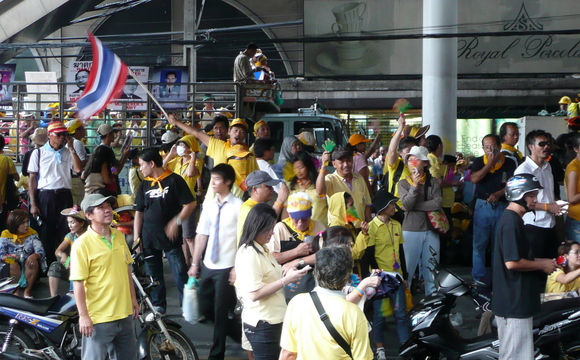 Security guards at the BTS Skytrain and the Emporium mall watched nervously, hoping that crowds would not turn against them.  All in all, the demonstration was very peaceful – other than causing massive gridlock in a city that already has terrible congestion.

Above: Here’s ninety seconds of footage I edited together so you could get a fuller sense of the scope of the protest.