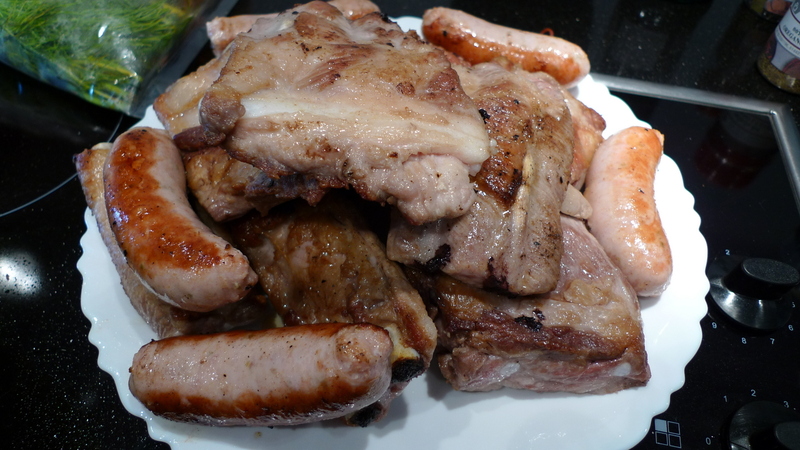 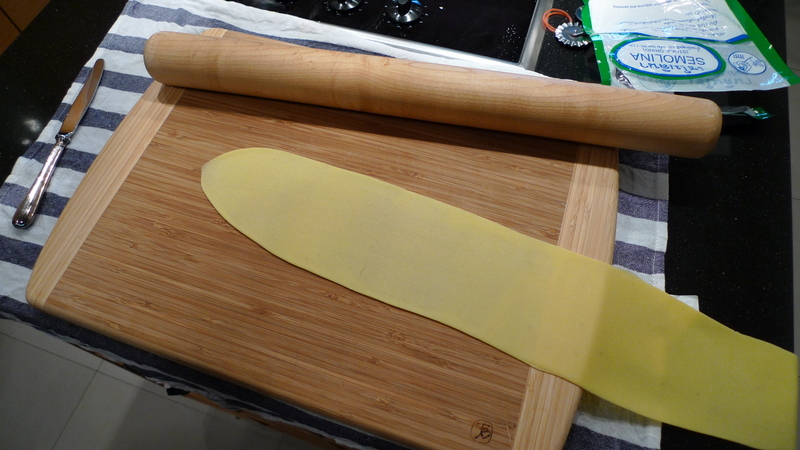 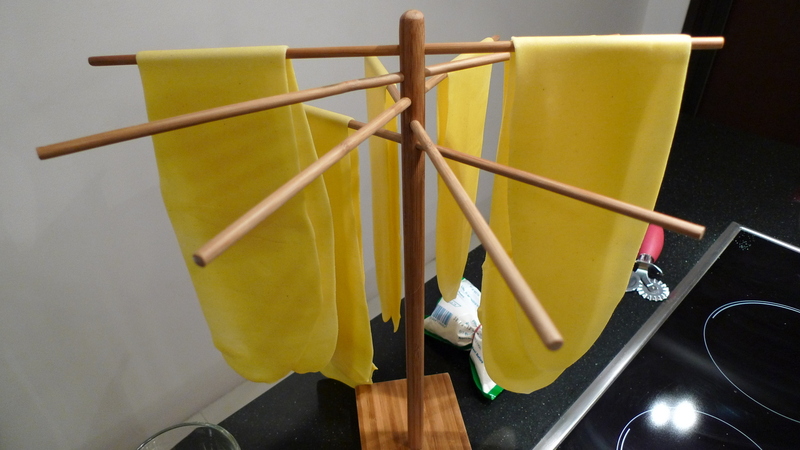 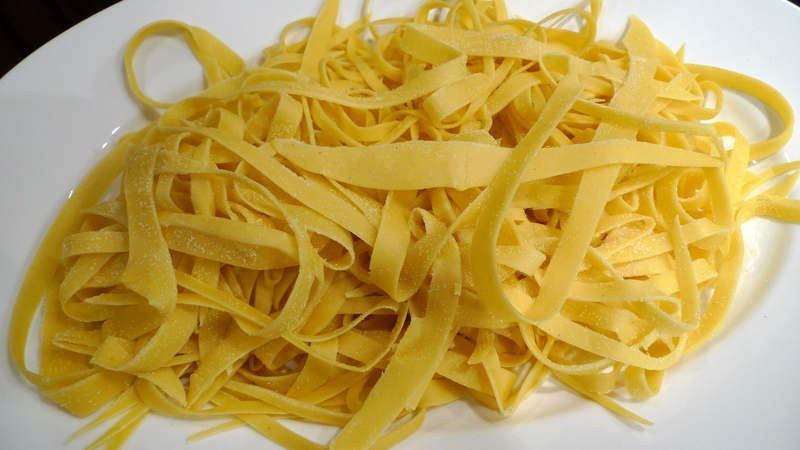 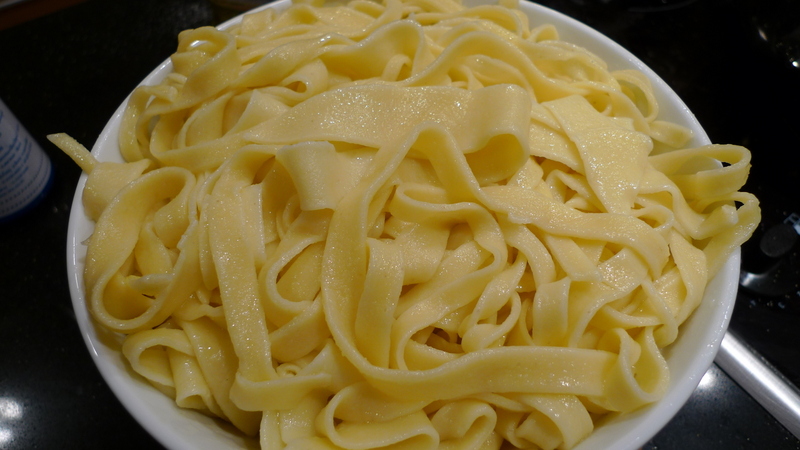 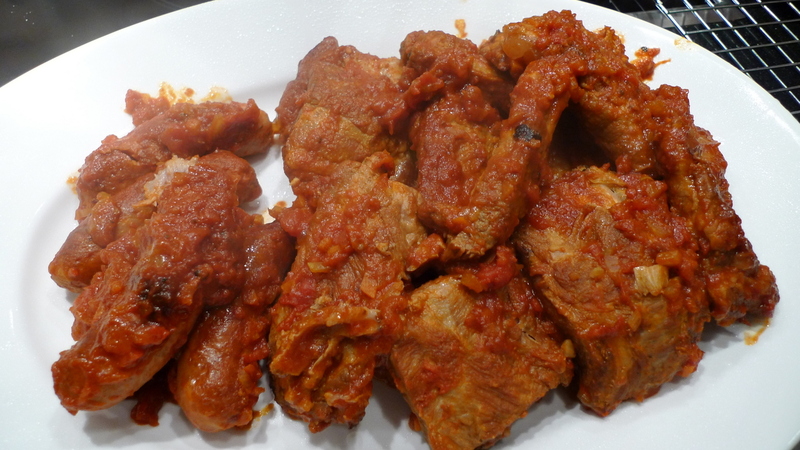 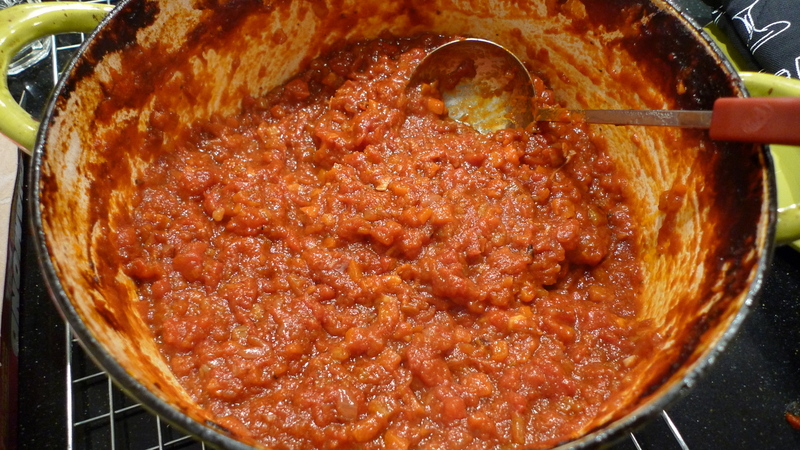 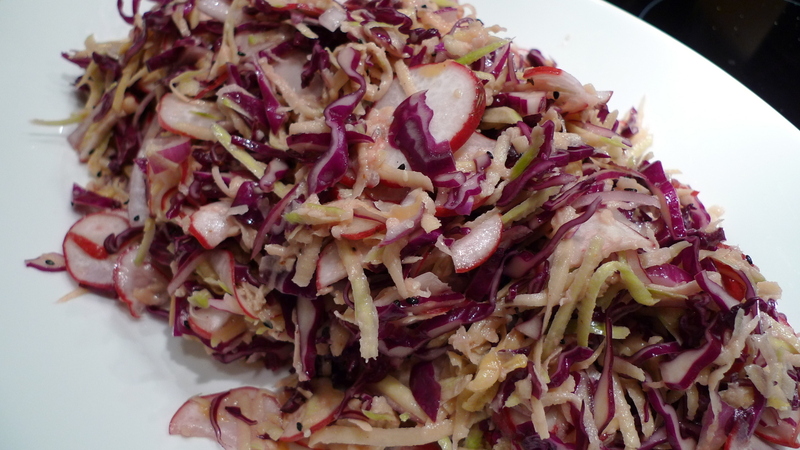 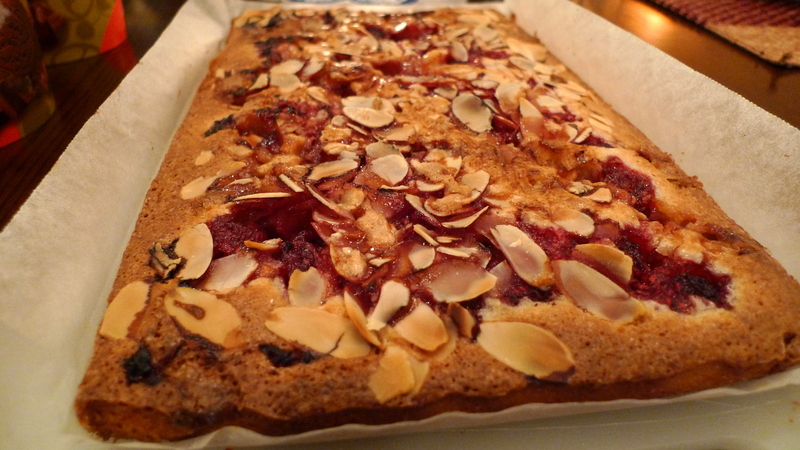 Whereas Saturday morning was spent at the Seagull Cooking Cafe helping break in their new cooking school, Saturday evening was spent at the house of Khun Nat, co-editor of the website catandnat.com where some of my entries are cross-posted.  After he started editing my pieces and discovered our common interest of food, he suggested we cook together.  Our first venture: Hearty Italian Sunday Gravy based on a recipe from Cooks Illustrated.

This over-the-top tomato sauce usually calls for six cuts of meat and half a day by the stove.  Thankfully, the CI recipe cuts that down to just three cuts (ribs, sausages, and meatballs) and just a few hours, most of which is in the oven.  In addition to preparing the sauce, spaghetti and a salad, Nat prepared an angel food cake.  Not wanting to waste the egg yolks, we also prepared two batches of ice cream: one banana and the other raspberry.

I did not go to the trouble of shooting everything, simply because I was being put to work.  But here is a video showing the highlights of the afternoon and evening.  If you cannot view the video embedded in this entry, the link for it is here. 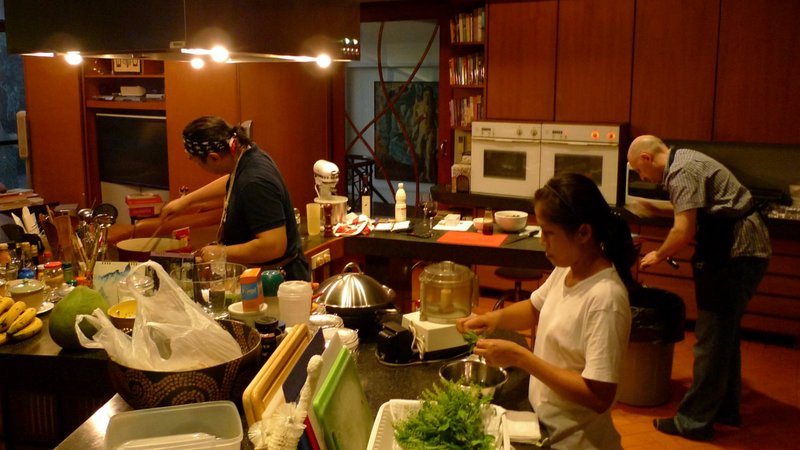 Raised in New York City, Nat moved here in his mid-twenties and has been here ever since.  He is one of those fortunate souls who got to design his kitchen from scratch and it is perfectly laid out to have lots of people involved in the cooking.  Off to the left is a seating area where guests can relax and talk with the chef.  Very useful arrangement, if only I had another few dozen square meters in my condo! 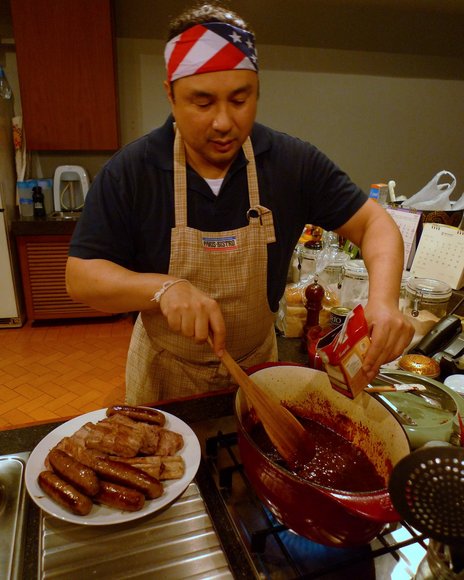 Iron Chef New York prepares the tomato sauce after browning in the meats in a skillet.  The secret behind the rich flavor is that you sautee the onions until they start to brown and then add tomato paste and cook it until nearly burned.  While this may seem too far at first, it concentrates the flavors and nicely caramelizes the sugars in the paste, and it ends up adding an incredible richness to the sauce.

After adding crushed canned tomatoes and cooking for a while, you add the ribs and sausages to the sauce and let them bake, covered, in the oven for two hours. 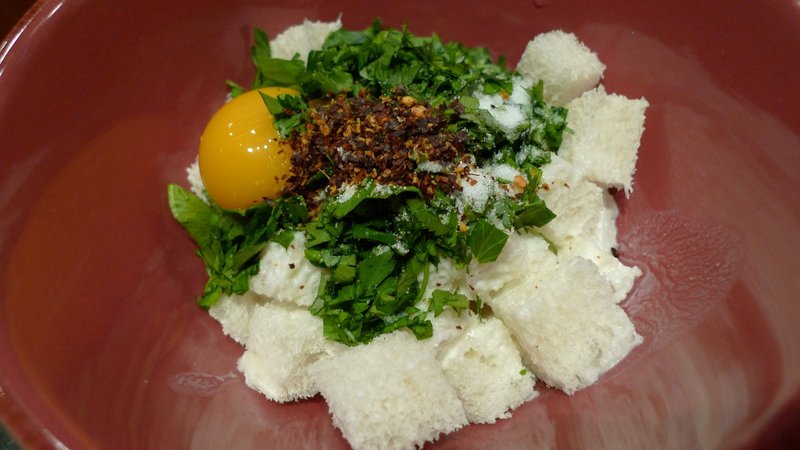 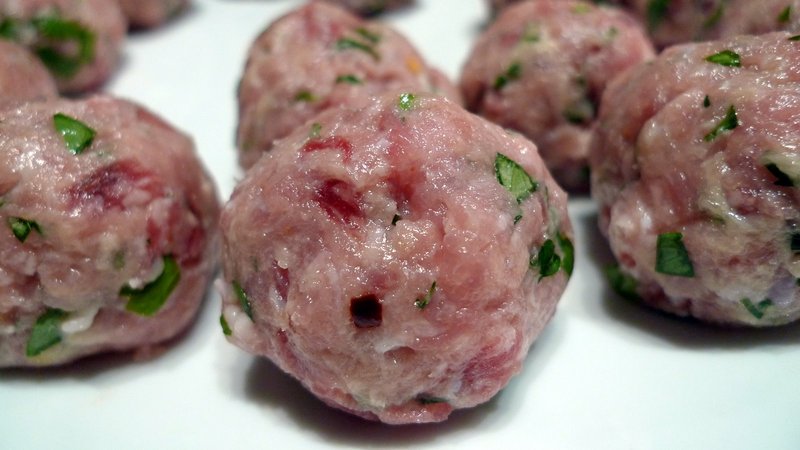 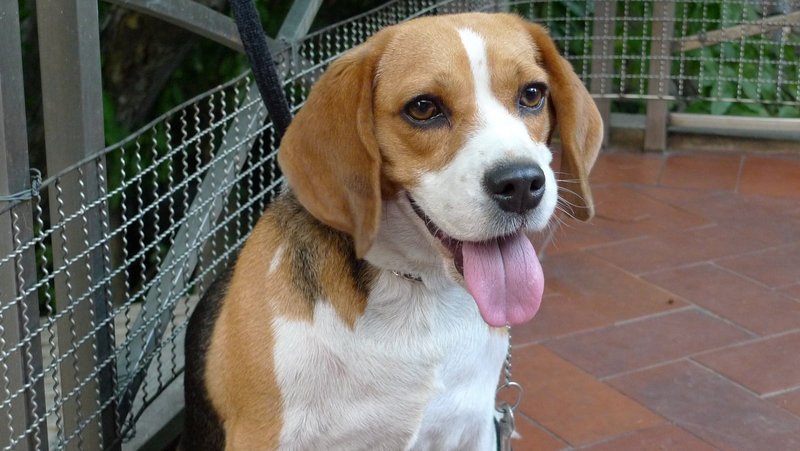 Nat has a half-dozen or more beagles, all of which are very cute.  They must have been tortured by the wonderful smells coming from the kitchen! 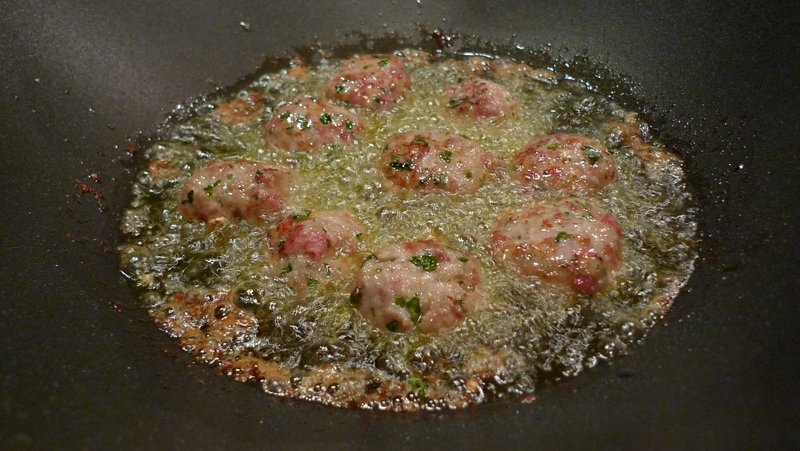 Fry the meatballs until browned. Busy kitchen as Tawn and Cha handle the wine, Nat keeps an eye on the meatballs, and the angel food cake rests upside down on the concrete countertop. 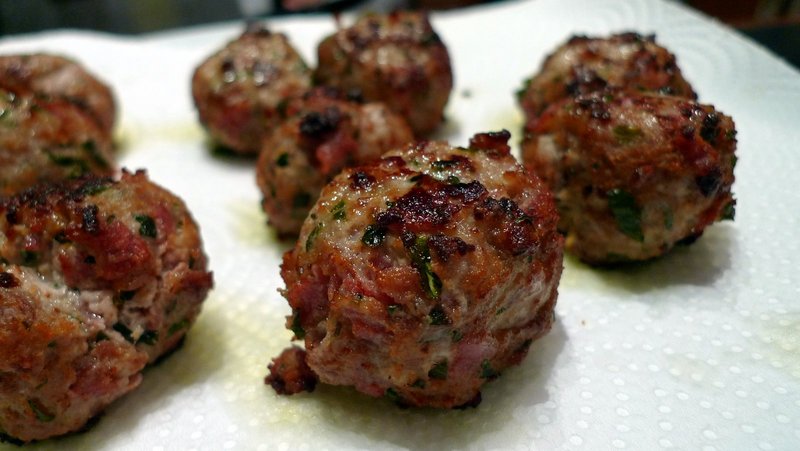 The finished meatballs with nice browned bits on the outside, ready to add succulent flavor to the Sunday Gravy. 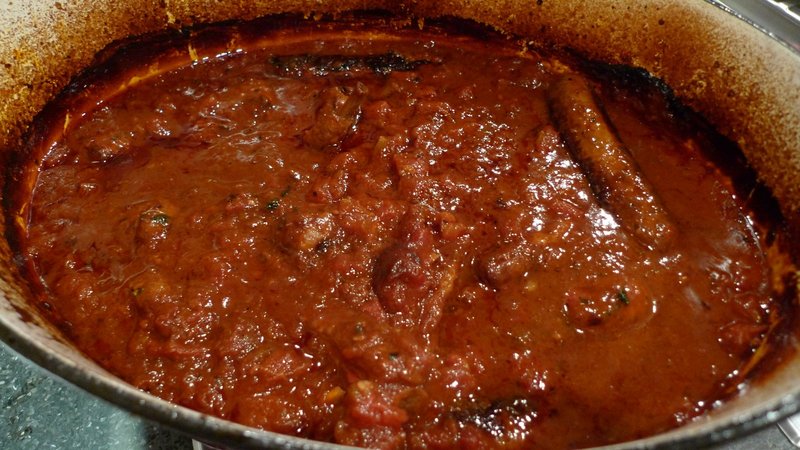 After the first round of cooking the ribs and sausages in the sauce, we agreed that it needed more liquid so added some water.  Then added the meatballs and let them finish cooking. Beautiful angel food cake.  I really should make these more often.  They are fat-free and very showy and satisfying desserts, especially with some fresh berries spooned on top.  We went for homemade ice cream, but berries would have been nice, too. 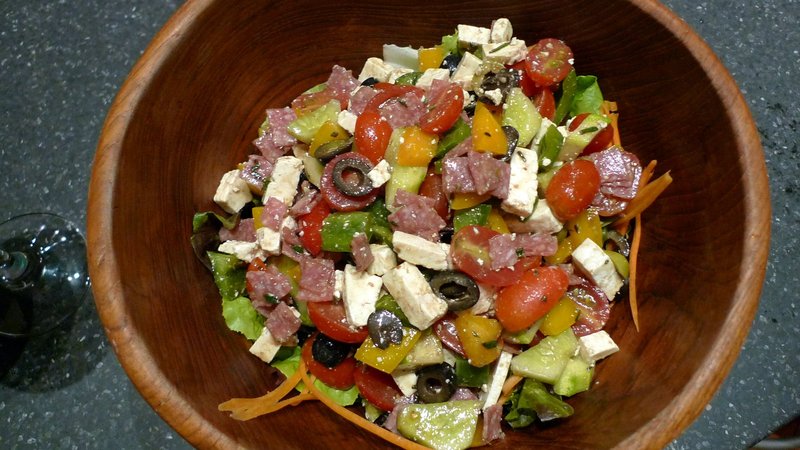 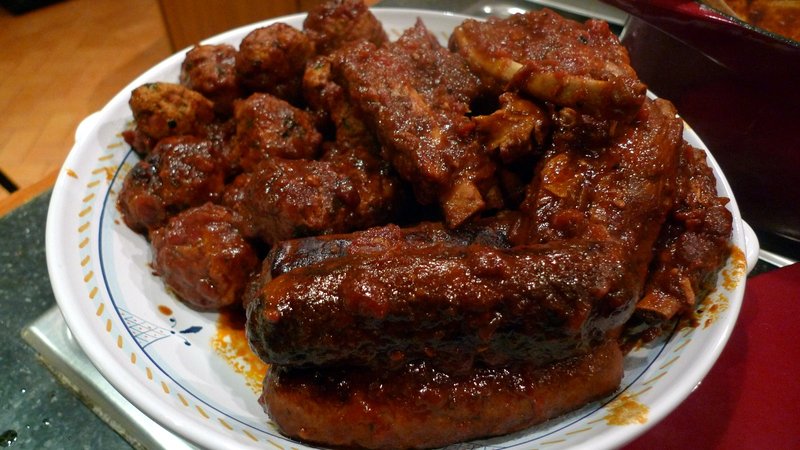 The meat piled on a platter, ready to serve.  Too bad Xanga doesn’t have a smell-o-blog feature. 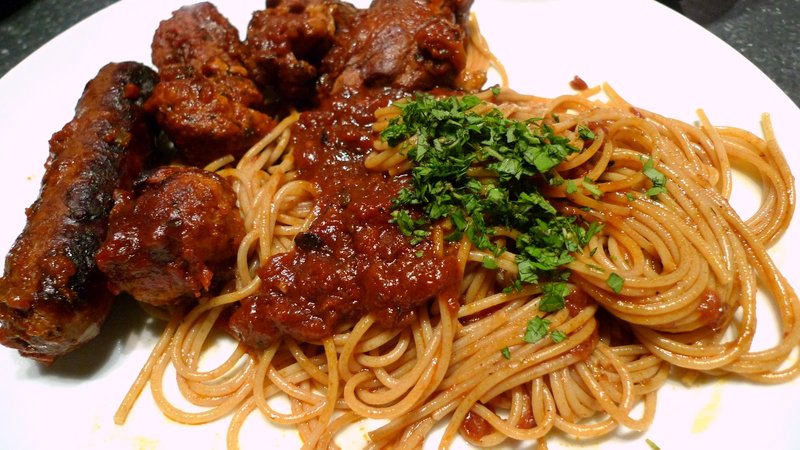 The final product: whole wheat spaghetti served with rich sauce and three types of meat.  Oh, this was good.  I hate to rub it in, but you really missed out! A slice of heaven.  Didn’t photograph the two types of ice cream, but you can trust me that they were tasty, too.  Is there room in my kitchen for an ice cream machine?