While in the United States, I had to travel from San Francisco to Los Angeles for a work event. Deciding to try something new, I booked a seat on the Coast Starlight, the Seattle to Los Angeles train operated by Amtrak. 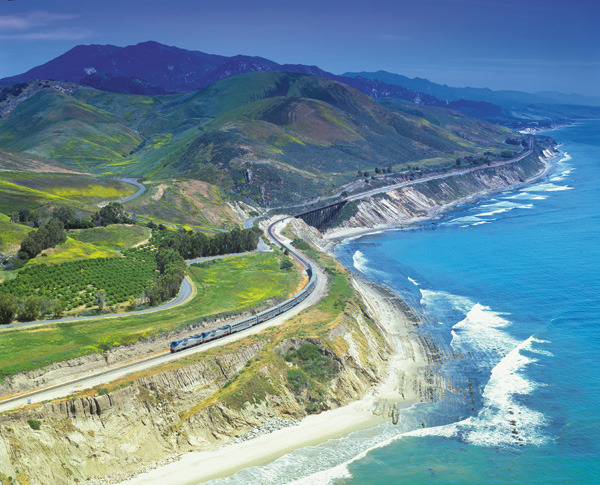 While I’m an aviation buff at heart, travel by train also interests me. I have used Amtrak several times on the Capital Corridor route, which runs from Sacramento to San Jose, and when I was very young my family traveled from Denver to Salt Lake City on the California Zephyr service. That’s the extent of my travel by train in the United States and I’ve longed for years to try Amtrak for a long-distance trip.

The Amtrak website was easy to use and I was able to book San Francisco to Santa Barbara one-way for only $50. The only downside was that the journey would take more than nine hours, door-to-door. Compare that to my experience on Taiwan’s high speed rail last year, covering a similar length journey in less than two hours! 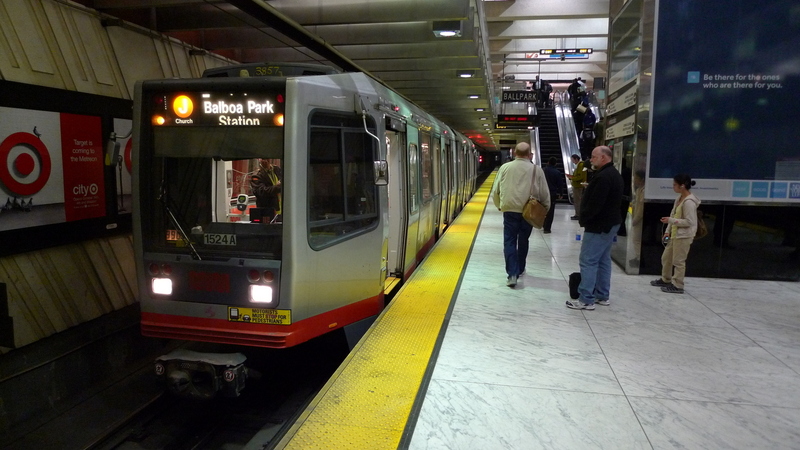 The first segment of my Amtrak trip started with a ride on San Francisco’s MUNI rail system, from the Church Street station to Embarcadero. At about 6:30 am, the train was not too crowded and there was room for me and my roll-aboard bag. 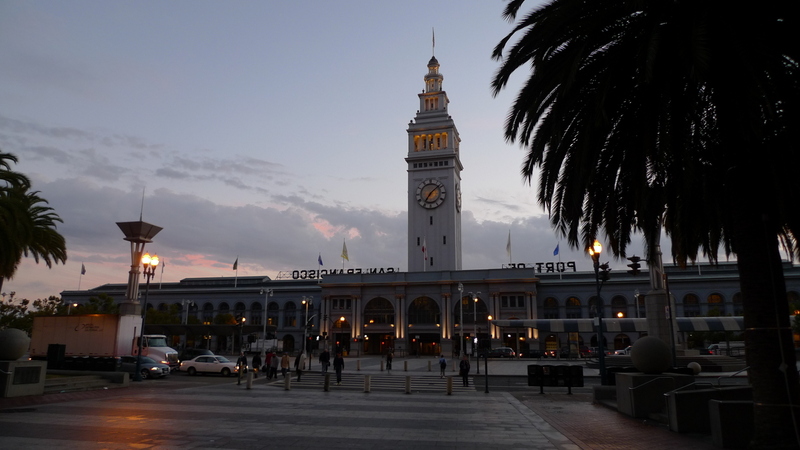 Amtrak doesn’t have a rail station in San Francisco, operating all its trains from the Emeryville and Oakland stations on the east side of the bay. They do provide bus service from several points in San Francisco, though, connecting to those stations. Above, the historic Ferry Building at the foot of Market Street. 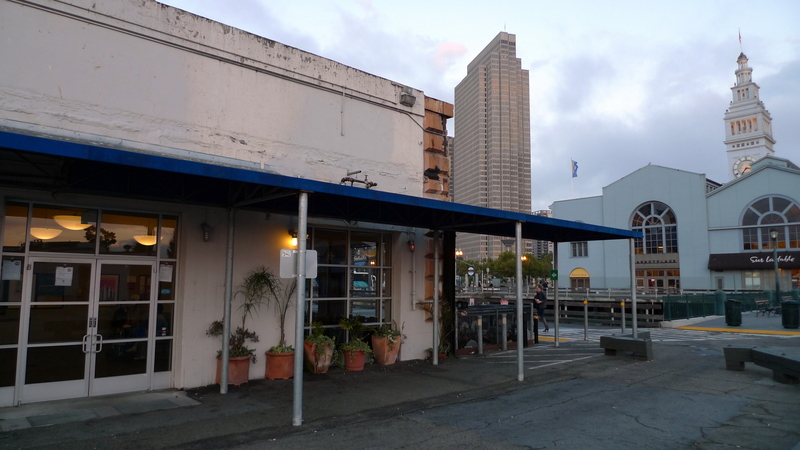 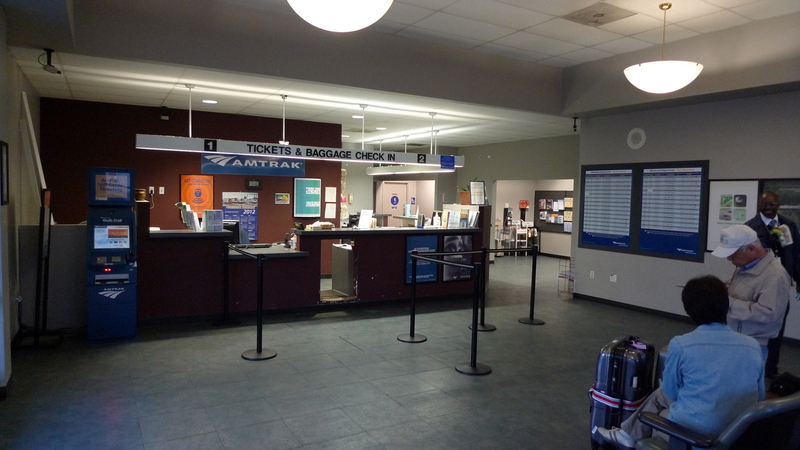 The inside of the Amtrak office is pretty plain, although reasonably clean. The staff was friendly and helpful, checking my bag all the way to Santa Barbara and explaining that I had about twenty minutes until the bus arrived if I wanted to walk to the Ferry Building for coffee. 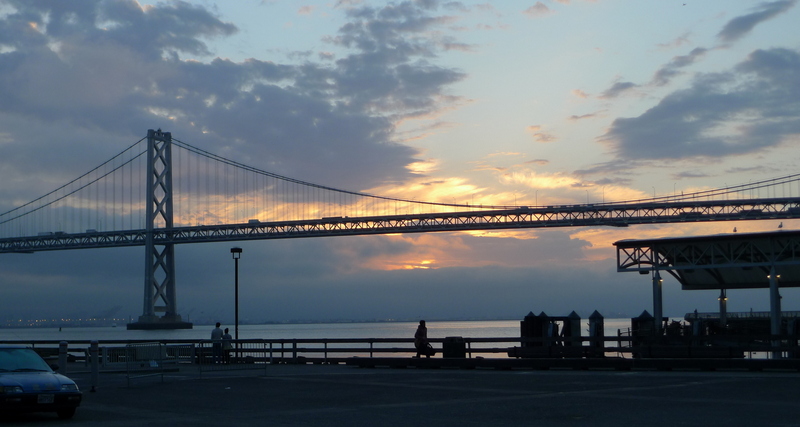 Gorgeous sunrise behind the San Francisco-Oakland Bay Bridge. One of the things I miss about living in San Francisco is the waterfront, which is one of the nicest features of the city. 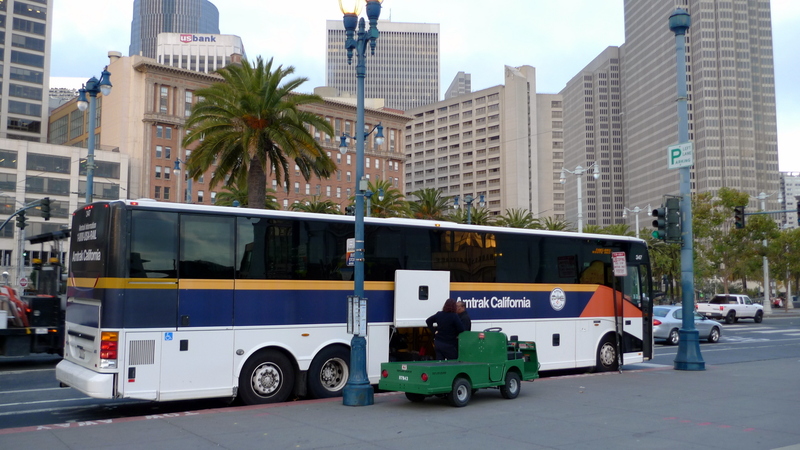 Right on time, the Amtrak bus arrived. The staff loaded checked bags onto the bus and the driver took half of our boarding passes (the same as on airplanes) for the San Francisco to Oakland portion of the trip. In the background you can see the Financial District. 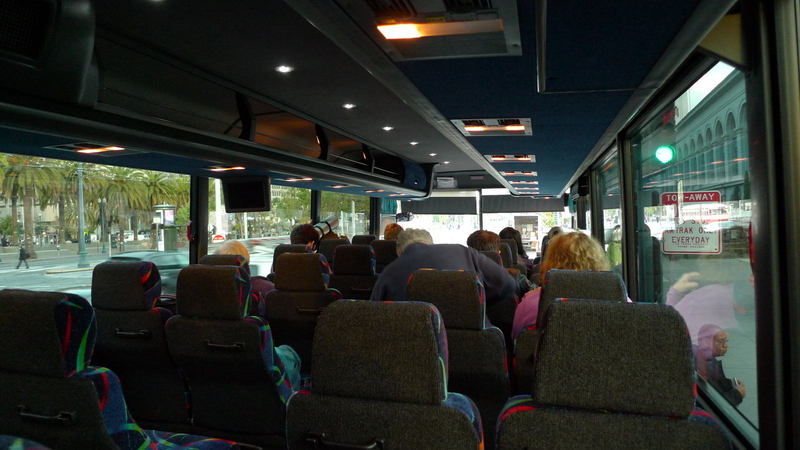 Only about ten passengers made the journey on the bus and the Ferry Building was its final stop in the city before heading to Oakland. We departed at 7:15, on schedule. 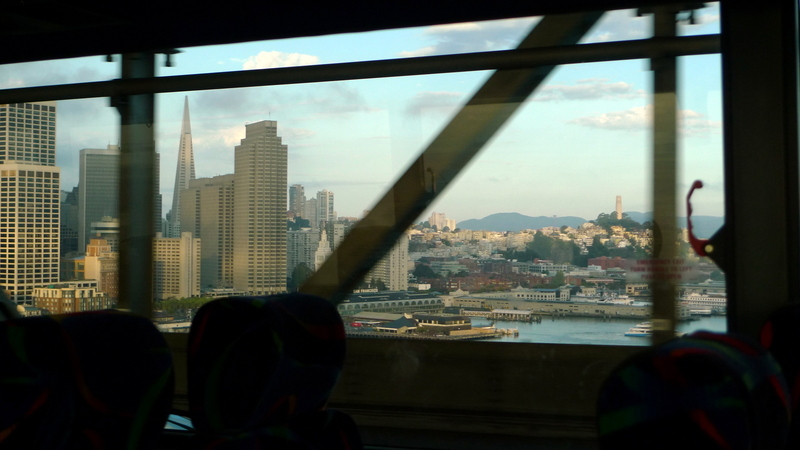 View of San Francisco, with the famous Transamerica Pyramid and Coit Tower. Bye, bye San Francisco! See you in a few days. The drive to Oakland took only about 25 minutes, although 40 was scheduled. At this time of the morning, the bus was traveling against the prevailing traffic, as evidenced by the long lines at the toll plaza on the westbound end of the bridge. 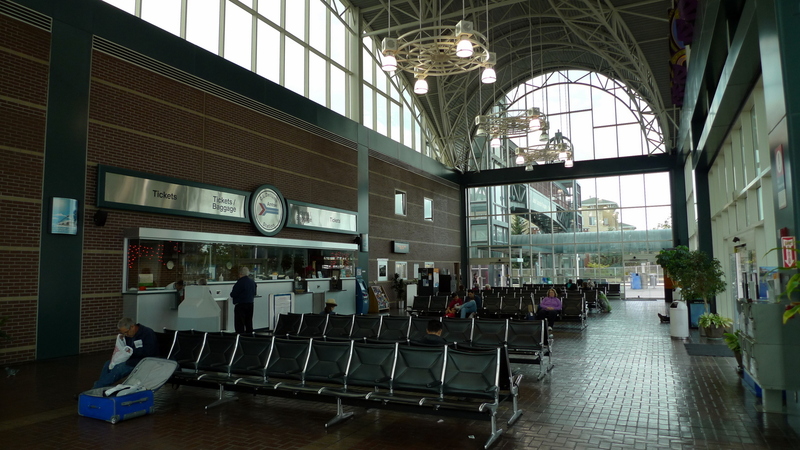 We arrived at the Oakland station, which is in Jack London Square. The station itself looks pretty new although it has a classic railway station aesthetic. While we waited for the train, which was scheduled to arrive about 8:00, a couple of Capital Corridor trains stopped on their way to San Jose. 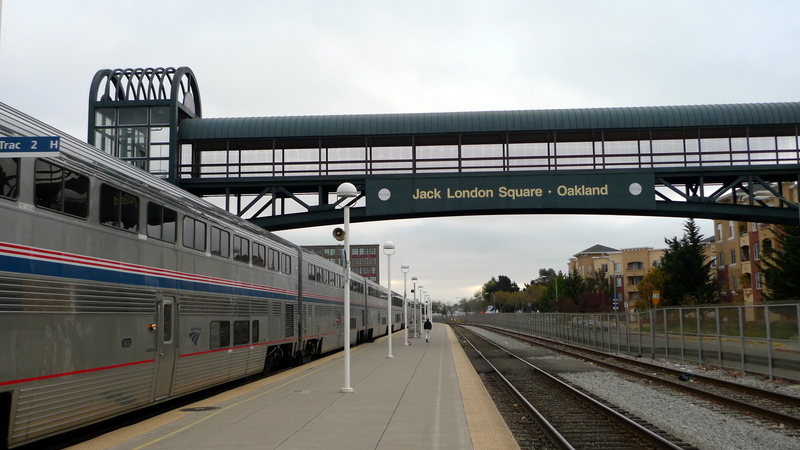 Our train arrived on time, leaving about twenty minutes for a crew change and for cleaning crews to service the train. I checked in with a conductor, who tore my boarding pass and then assigned me a seat. I asked to a window seat on the righthand side so I would face the ocean later in the day. We departed on time at 8:25. 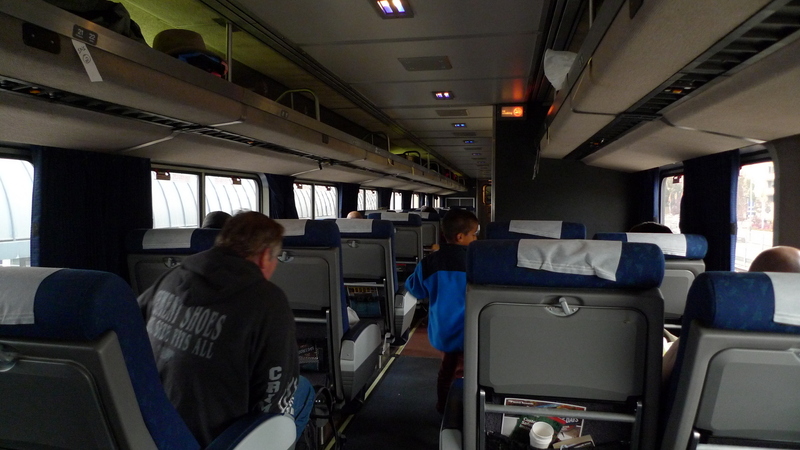 A view from my coach class seat. While the name is the same as on airplanes, you would recognize this more as a first class seat. The seating is two-by-two with wide seats and generous legroom. Later in the trip, I had a seat mate and the only complaint is that there is no armrest between the two seats. For strangers traveling next to each other, the American sense of personal space is lost.

The conductor came through the train and put a seat assignment card over each seat. This way you could get up and move around, comfortable in the knowledge that your seat would still be free when you returned. Initially, I was apprehensive about leaving my bag unattended, but eventually decided that since we make so few stops, I would have a chance to spot anything that was missing before arriving at the next stop and inform a conductor. Yes, a little paranoid. 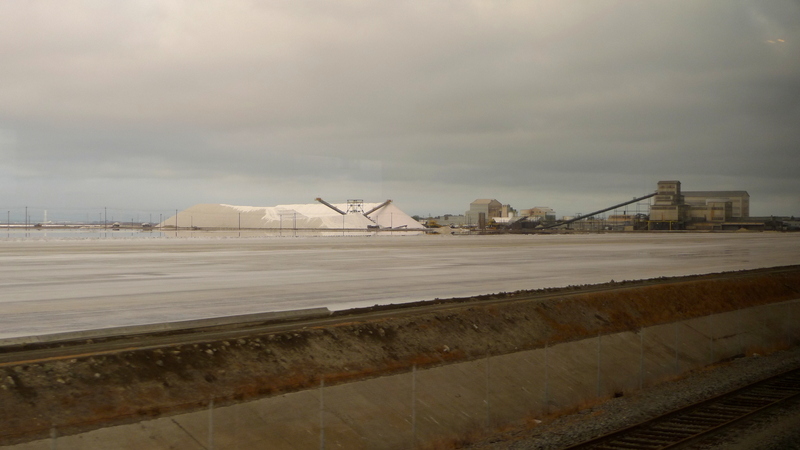 Our progress down to San Jose was very slow, with the train crawling along at just a few miles an hour. Here, a view of the salt evaporation ponds near Hayward. They were harvesting the salt before the autumn rains arrived and the view reminded me of those I’ve seen in Samut Songkhram province here in Thailand. 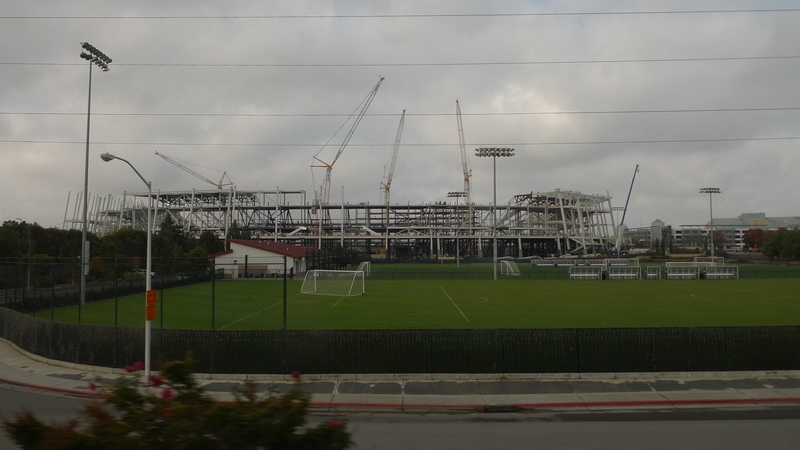 In Santa Clara, we passed the construction site for the San Francisco 49ers’ new stadium. It seems that even though they will play 40-some miles south of the city, they will maintain their name. Shouldn’t it be the Silicon Valley 49ers? 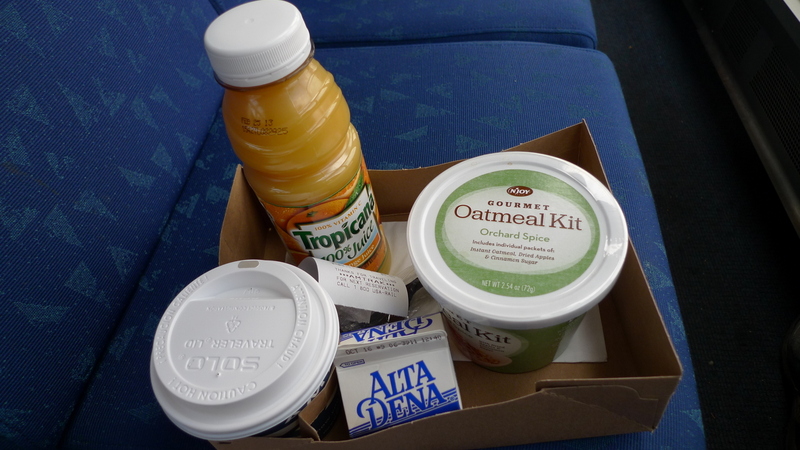 Once we left San Jose, I went to the lounge car to take in the view and buy a bite of breakfast. This “oatmeal kit” (which came with a cup of hot water and a container of milk) and an orange juice cost me only $5. The list of ingredients on the oatmeal package was shocking, though. Dried oats and a pinch of salt would seem to be enough, but they have all sorts of other things including dried apples and a cinnamon-sugar packet. 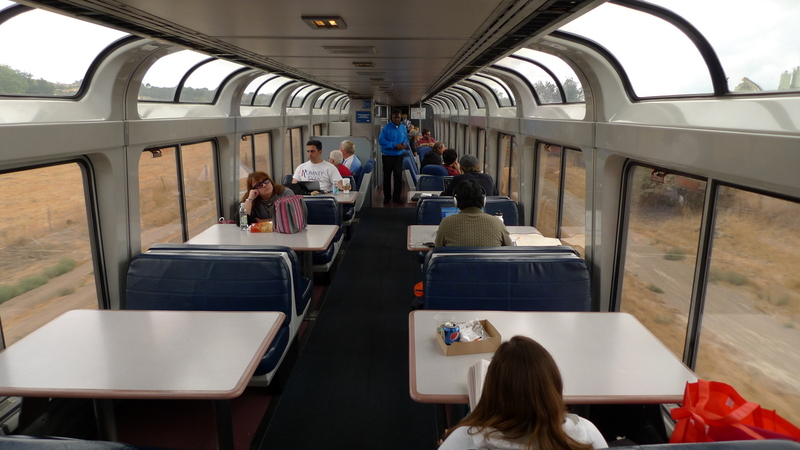 The lounge car features tables and then sofa-type seats and swivel seats that face the windows. I should have spent more time here since the views are quite nice and the atmosphere is brighter than in the coach cars, but some of the passengers seemed to be escapees from the Greyhound bus.

Sorry, that isn’t really fair to characterize people who travel on Greyhound in a negative light. What I should say is that there were several people traveling by themselves who were sitting in the lounge car, muttering to themselves (I checked – no bluetooth earpieces), and drinking beer at way too early in the morning.

Instead of staying in the lounge car, I returned to my coach seat and took out my iPad. The coach seats include a handy electrical plug in the wall below the windows, so it is easy to use electronic gadgets without fear of running out of battery. View out the back of the train. There were many areas where we would slow to a crawl and several more times when we came to a complete stop to wait for a freight train to pass us. Amtrak doesn’t own its own tracks so they have a lower priority than the trains belonging to whatever railroad owns any particular stretch of tracks.

According to the conductor, the fastest speed the train can go is 79 miles per hour (127 kph) and that is for a limited section of track. Compare this to the Taiwan high speed rail, which runs a top speed of 186 miles per hour (300 kph), and you have a pretty severe indictment of America’s railway infrastructure. Adding a second set of rails and upgrading tracks so more of the distance is rated for 79 miles per hour, would increase the average speed on the route from approximately 35 miles per hour to something more respectable. 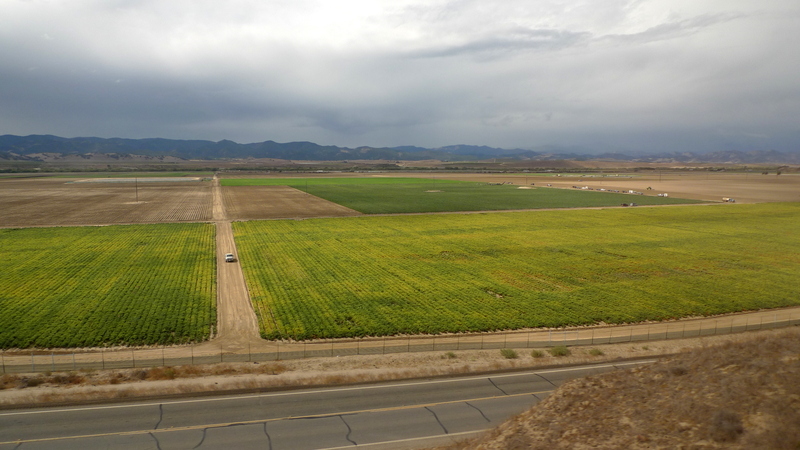 Passing through the Salinas Valley, all around were reminders that agriculture remains and important part of California’s economy.

The conductor took reservations for lunch, which is served in the dining car. Reservations, which are in 15-minute increments, are taken to ensure that everyone who wants to eat, has an opportunity to do so. The dining car looks similar to the lounge car, with tables that seat four diners. If you are traveling in a group of less than four, you can expect to be seated with strangers.

I was looking forward to this, as it seems that part of the adventure of train travel is to meet new people and have conversations with your fellow travelers. In this case, the three other solo travelers at my lunch table were resistant to my charms and every attempt at casual conversation was met with monosyllabic responses. As we ate in silence, everyone stared in a different direction to avoid eye contact. I could imagine the lines from our eyes looking like spotlights swooping across the sky but never connecting. 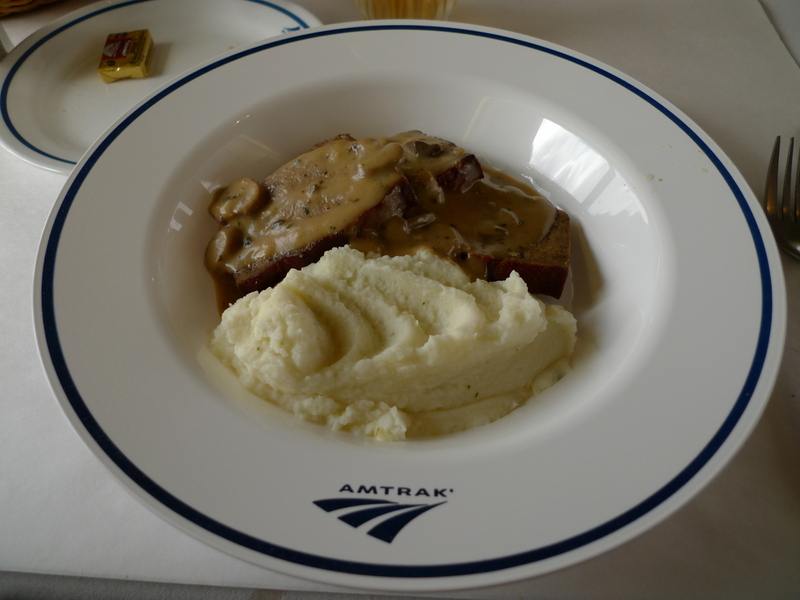 The food on the train (southbound menu here) was uninspiring, although better than what you might get on an airplane. For $11.75, I had the “marketplace special” which this day was meatloaf and mashed potatoes. It was served with a sad looking salad, dinner roll, and coffee, tea, or milk. The texture was rubbery, although the mushroom sauce helped a bit. Not wanting to spend any longer than necessary with my unsociable dining companions, I skipped dessert and headed back to my seat. 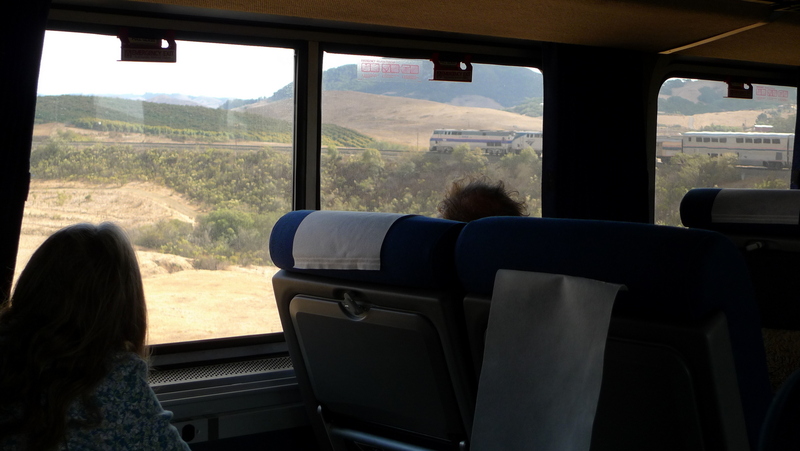 Heading into San Luis Obispo, we descended Cuesta Grade, losing 1,000 feet of elevation in just 11 miles. Here we see the train rounding one of two horseshoe curves, in which the front and rear of the train get a good look at each other. A few minutes later we passed the California Men’s Colony, a state penitentiary whose famous guests have included Dr. Timothy Leary and Ike Turner. 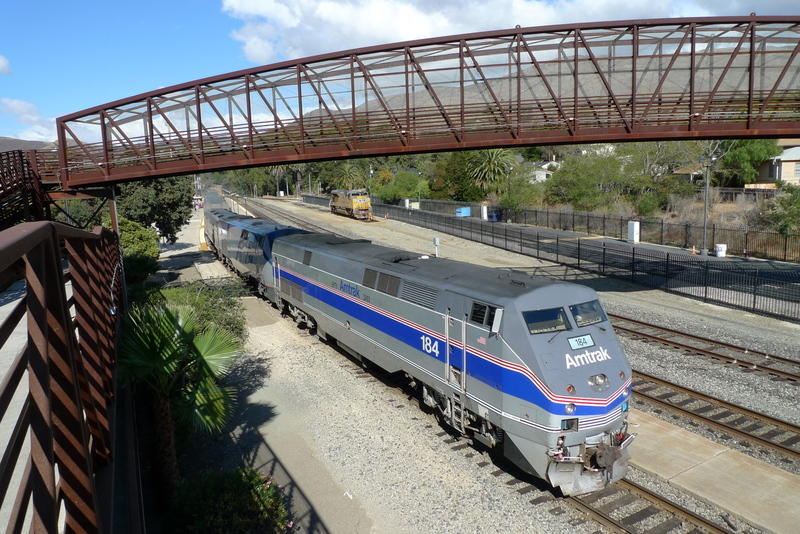 We arrived a few minutes early into San Luis Obispo and ended with almost thirty minutes at the station. I took the opportunity to get out and stretch my legs, climbing the pedestrian bridge to get some shots of the train. Smokers taking one of very few smoking breaks between Oakland and Los Angeles. There was a small portion of the city just across from the station, but no coffee shop – something I would have welcomed. Just a few minutes after departing San Luis Obispo, we stopped for more than twenty minutes to wait for traffic to pass, another example of the delays that seem incredible to me. Not long after we started moving again, we took a turn for the coast and caught our first view of the Pacific Ocean. For the next 100 miles, the track follows the coast line passing Vandenberg Air Force Base and Point Conception. Beautiful view, turned slightly golden because of the window’s polarizing, of the Pacific Coast. At many stretches, we could view the oil derricks offshore in the Ellwood Oil Field. Interestingly, this was the site of one of only two attacks on the continental United States during World War II. In February 1942, Captain Nishino Kozo surfaced his submarine in the Santa Barbara Channel and fired 17 rounds from his 140mm deck gun towards the oil field. He inflicted little damage in the Bombardment of Ellwood but the attack and resulting hysteria were used to justify the internment of Japanese-American citizens, which began a week later. The train passes just a few dozen feet above the beach, a beautiful sight that made me thankful I had requested a seat on this side of the train.

I arrived at the Santa Barbara station pretty much on time at about 6:00, nine-and-a-half hours after departing Oakland. My bag was delivered a few minutes later and my journey came to an end.

Overall, the trip was comfortable and easy enough, although it is hard to justify spending so much time unless you are on vacation. Even with the hassles of modern-day air travel, I could have arrived in less than a third of the time for probably only about twice the price. If I was traveling with someone else, the train might be more enjoyable and I would some day like to take my nieces on the Denver to Salt Lake City trip that I took as a child. Until then, I think all of my travel in the US will be by air.