Recently, I was invited to attend a dinner sponsored by WORLDFOODS, a Malaysian based maker of high quality Asian-inspired sauces, marinades, chutneys, and pastes.  I walked away with a bag of several of their 51 different products and a challenge: come up with and blog about new and creative ways to cook with their products.

The first product I used was their Malaysian Chilli Coconut Marinade.  It was a weeknight and I needed to prepare a quick meal.  One chicken breast and thirty minutes later, I had a tasty protein ready to cook and add to a salad.  There were two things that caught my attention about the marinade:

First, one reason I cook a lot is that I want to know what I’m putting in my body.  Looking at the ingredient list, I was pleased to see familiar, pronounceable words.  No artificial colors, preservatives, flavorings, MSG, or gluten.

Second, the flavor was remarkably good and remarkably authentic.  Unlike a lot of “Asian” products that are watered down versions of popular sauces, the WORLDFOODS products have the same ingredients (and the same amount of chilies!) that you find when eating these foods in their home country.  While available worldwide, you won’t find any “Americanization” of the flavors.

Wanting to find ways to use the marinade differently than its traditional use, I put the right side of my brain to work.  The idea I settled on was to do roasted root vegetables, something I associate more with olive oil and rosemary, and use the Chilli Coconut Marinade as a glaze. 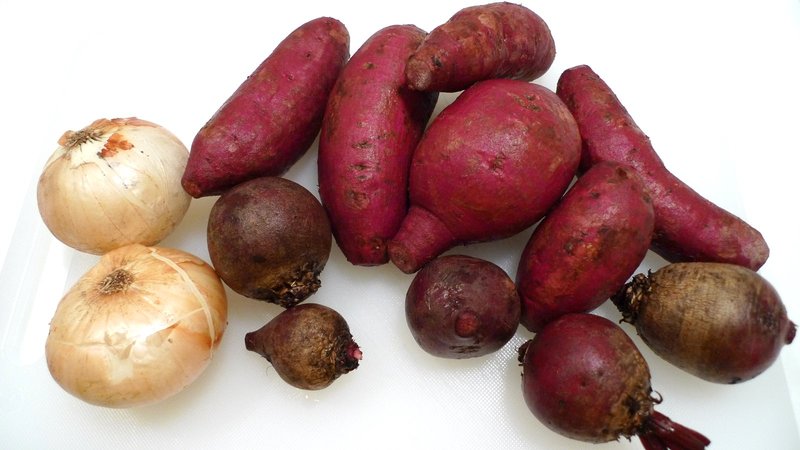 I decided on a combination of yams and beets (about 1.5 pounds or 750 grams total), with two yellow onions and a handful of garlic cloves.  These were scrubbed and, except for the yams, peeled.  Then I sliced them into approximately 1-inch (2.5 cm) pieces. 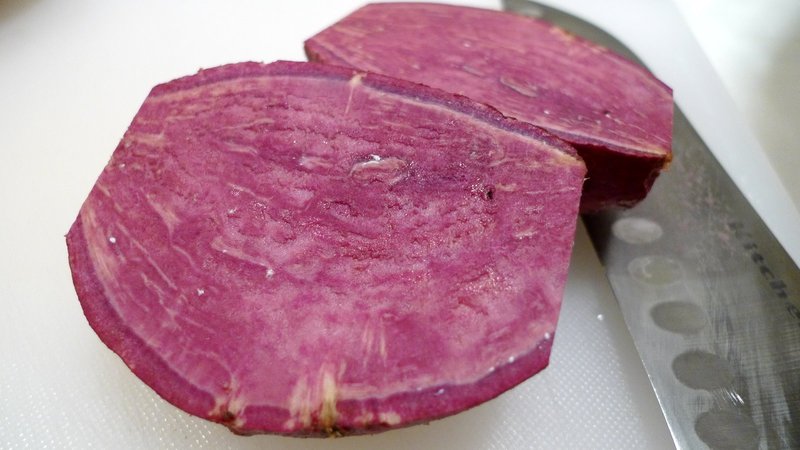 When I cut open the yams I was surprised to discover that they did not have the orange-colored interiors I am familiar with.  Instead, they are purple.  In the end, the flavor wasn’t that different, although it did lead to a slightly more monochromatic dish than I had anticipated. 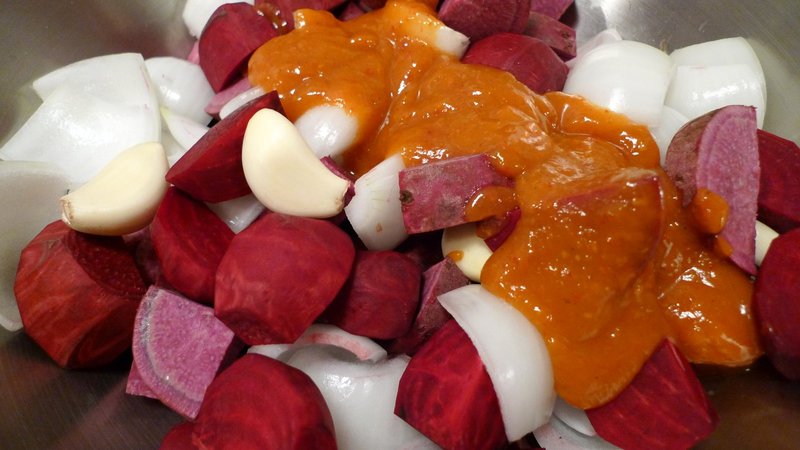 Once the root vegetables, onion, and garlic were combined, I coated them with about 1 cup (200 ml) of WORLDFOODS Malaysian Chilli Coconut Marinade and 1/2 cup (100 ml) of chicken broth.  You can substitute water or vegetable broth, if you wish to keep the dish vegetarian.

The vegetables were poured in an ovenproof dish and then placed in a preheated 350 F (180 C) oven for about 25 minutes, stirring every 5-10 minutes to keep the vegetables coated with marinade.  There is enough marinade that it forms a bit of a pool at the bottom of the dish, helping cook the vegetables by steam as well as direct heat. 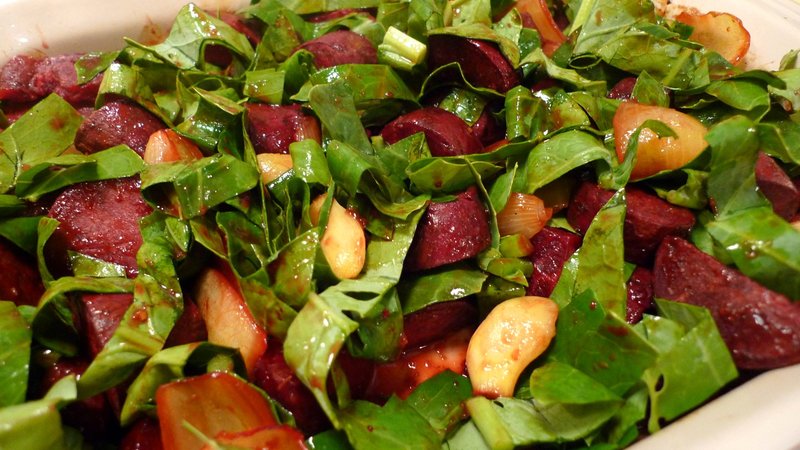 Once the yams and beets were getting soft but not yet fully cooked through, I stirred in about 4 cups (90 dl) of kale, washed and cut into wide strips.  The dish returned to the oven for about ten more minutes, enough time to finish cooking the root vegetables while still leaving the kale a little crunchy.  You can cook the dish for longer if you prefer your vegetables softer. 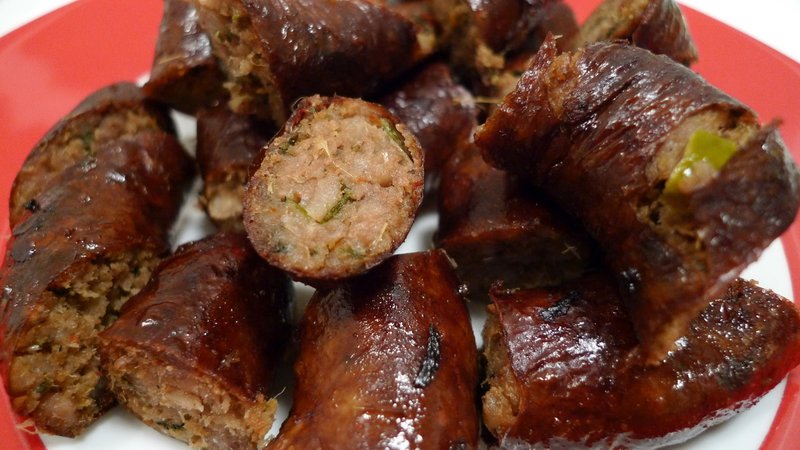 Uncommitted to the idea of this being a fully vegetarian meal, I also pan fried a plate of Northeastern Thai style sausage called Sai Oua, sliced it, and served it on the side. 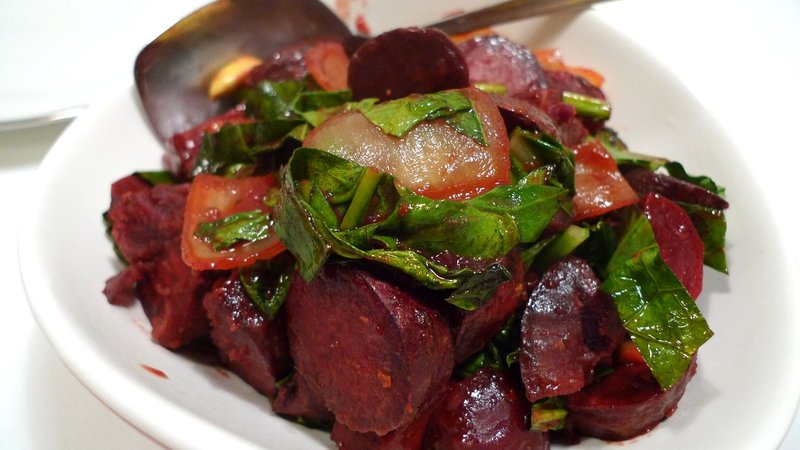 The end result was very nice.  The marinade had thickened into a nice glaze, coating the vegetables with a sweet, tangy, and spicy sauce which countered the natural sugars in the yams and beets.  The kale provided a fresh contrast that made for a very satisfying meal.

All in all, I’m very pleased with the WORLDFOODS Malaysian Chilli Coconut Marinade and look forward to trying it in other dishes, as well as to trying their other products.

While WORLDFOODS is based in Malaysia, its products are available in major countries across the world including Australia, the UK, the United States, and Canada, as well as most Southeast Asian countries.  To locate a store which carriers their products near you, use this store locator.  In the United States, you can also order WORLDFOODS products for home delivery through MyBrands.com.

Full disclosure: While I am not being paid or otherwise compensated to write this entry, I did receive the products for free and dinner that night was paid for by WORLDFOODS.  It’s important to me that you know that the opinions expressed in this blog are my own and are not bought or paid for by others.

By Wednesday night, the leftovers were finished.  The black bean chili was gone.  The braised pork in star anise and ginger was gone.  The refrigerator was looking bare and it was time to cook again.  Wanting the warmth of a homemade meal without too much hassle, I opted for weeknight roast chicken.

What makes it perfect for the weeknight?  For starters, it doesn’t use a whole chicken but instead uses pieces.  This cuts down on a whole lot of roasting time.  Additionally, I can make a double batch just about as easily as I make a single batch, so I can get plenty of leftovers – leftovers that can be repurposed into other dishes!

The first step when you walk into the door is to get your chicken ready.  There are a variety of ways you can do this depending upon how much effort you want to put into it.  My favorite way is to take a couple of cups of buttermilk, a tablespoon of salt, and a couple of hearty dashes of cayenne pepper and mix them together in a plastic zipper bag.  Dump in the chicken, shake it up so the chicken is completely coated, and then set it aside to marinate.  If the buttermilk brine is too much work, just sprinkle both sides of the chicken pieces generously with salt and set in a bowl to give the salt a chance to work its magic. 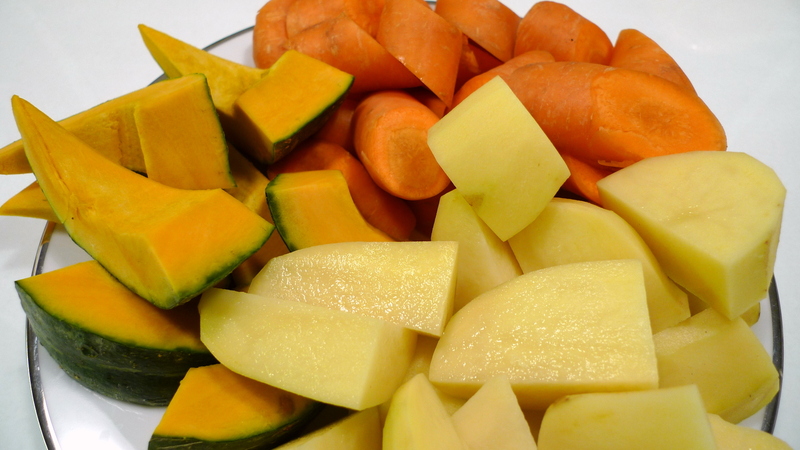 Turn the oven on to about 350 F / 180 C.  While it is heating, prepare some root veggies.  I had some potatoes, carrots, and Japanese pumpkin on hand.  Other tubers or root veggies would be fine, too.  No need to peel potatoes and carrots if you don’t want to – a good scrub of the exterior is fine.  Now, when it comes roast chicken with root veggies, the veggies are the things that can take some time.  A shortcut, if you want to take it, is to boil a pan of water with some salt in it and parboil (pre-cook by boiling) the veggies.  The softer things (pumpkin) only need a few minutes then pull them out.  Potatoes need more time and carrots could use eight minutes or so. 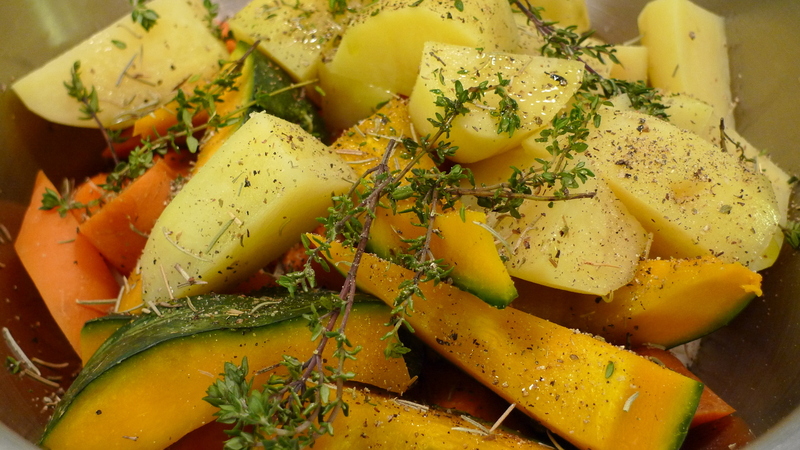 Put the parboiled veggies in a bowl or save yourself the washing and put them directly into a baking dish.  This is a good time to throw in some sliced onions and/or some whole cloves of garlic, if you would like.  Add a generous pour of extra virgin olive oil, another sprinkling of salt, several turns of the pepper mill, and then you can add some herbs, too.  Rosemary makes the kitchen smell marvelous and some thyme (I happened to have fresh on hand) is really nice, too.  Stir the veggies a few times so they are coated with the oil, salt, etc.

If you haven’t parboiled the veggies, you should go ahead and put the dish into the oven and give them about fifteen minutes head start on the chicken, covered with aluminum foil.

If you marinated the chicken, take it out of the buttermilk, rinse the pieces off, and pat dry with paper towels.  If you didn’t use the buttermilk, you can just pat dry with the towels.  Add some fresh ground pepper and a drizzle of the olive oil, and then place on top of the veggies with the skin side of the chicken facing up, and bake, covered with foil, for about twenty minutes.  After twenty minutes, remove the foil and continue cooking until the chicken is nicely browned, about another twenty to twenty-five minutes. 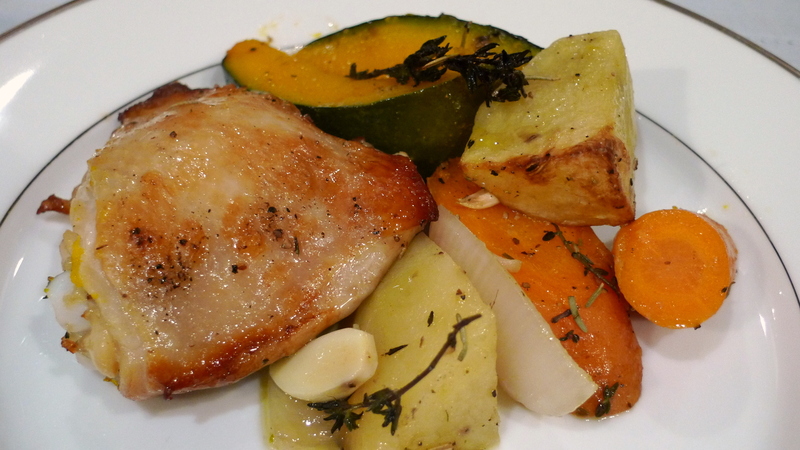 Check the veggies with a knife – they should be cooked to the tenderness you like.  I like mine to still have a little firmness to them but not too much.  Check the chicken with a thermometer – you’re looking for an internal temperature of 165 F.  Pull the dish out and let it rest for about five minutes before serving.  There you have it – a healthy and easy weeknight dinner.