Several years ago I worked with a man named Mik.  Mik was a trainer on my team and he had this fantastic spoonerism he would share during a week-long training class.  He told it during the section about effective communication, although its primary purpose was to serve as a mid-week tension breaker.  Try reading it and see if you don’t enjoy it.

When the Mugly Other and the two Sad Bisters received an invitation to the Pransom Hince’s bancy fall, they were so excited they nearly dell fown in their rush to mo to the gall and buy some dancy fresses and shancy fooes.  When Rindercella asked if she was also invited to the Pransom Hince’s bancy fall, her Mugly Other laughed and said, “Wo nay!  You have to hay stome to hean the clouse.”

She was kitting there a scrien’ when sall of a udden, Rindercella’s GaisyModFather sopped onto the pene and he asked…”Girl, cry are you whying?”  Rindercella niped her wose and, thearing her cloat, answered “Because my Mugly Other and two Sad Bisters have gone to the Pransom Hince’s bancy fall and I’m not invited because I have to hay stome and hean the clouse!”

As you can guess, the Pransom Hince found the slass glipper and decided that the very dext nay he would set about his rather’s koyal findom to find the fady’ss loot that the flipper would slit.

So the storal of the morey is…If you every go to a bancy fall and want to lull in fove with a Pransom Hince, you’ve gotta slop your dripper!

Along the same lines, there is a fascinating photo series by Vancouvery photographer Dina Goldstein titled “The Fallen Princesses Project“.  Bristling against the beauty myths that Disney perpetuates through their “princesses” series, she imagines “happily ever after” being replaced with a more realistic outcome that addresses current issues. 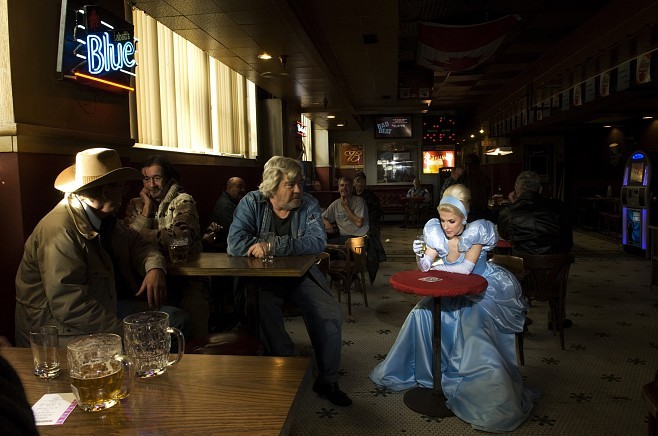 Above is Cinderella, sitting alone in a dive bar, drinking.  The other images in the series are much more provocative, but I won’t steal Goldstein’s thunder by reproducing them here.  Please go visit the article at the JPG Magazine website.