In the early part of July, I began my grand adventure as a container gardening condo dweller here in Bangkok.  Within a few weeks, I realized that my approach was all wrong: starting seeds in large pots, planting during the rainy season, trying to grow plants on a balcony that doesn’t get sun until mid-August.  Still, I pushed forward.  Eventually, though, it was time to retrench, both literally and figuratively.

This picture exemplifies the twofold problem I faced: The rain was both too frequent and fell in too great a quantity, and the soil was too clay-like and not porous enough.  The result were poor seedlings (carrot and beet root in this particular picture) that were growing in an environment more suited to rice than anything else. 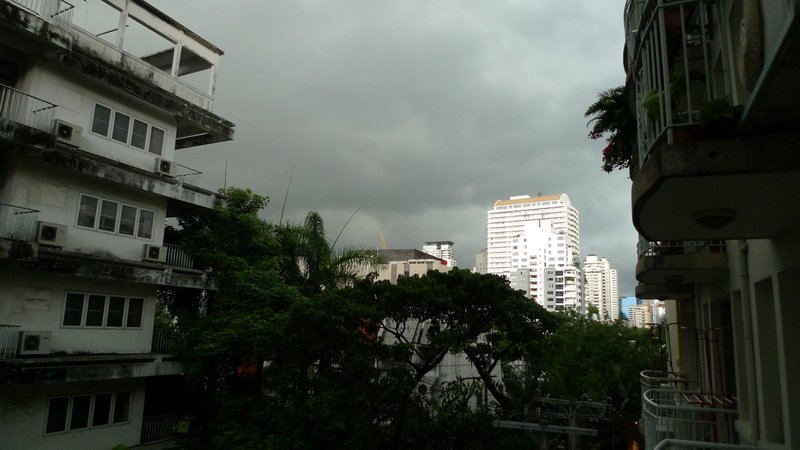 My first response was defensive.  Every time the sky started to darken (which is often during this time of year here in Thailand), I would pull the containers off the side of the balcony and move them closer to the sliding glass door. 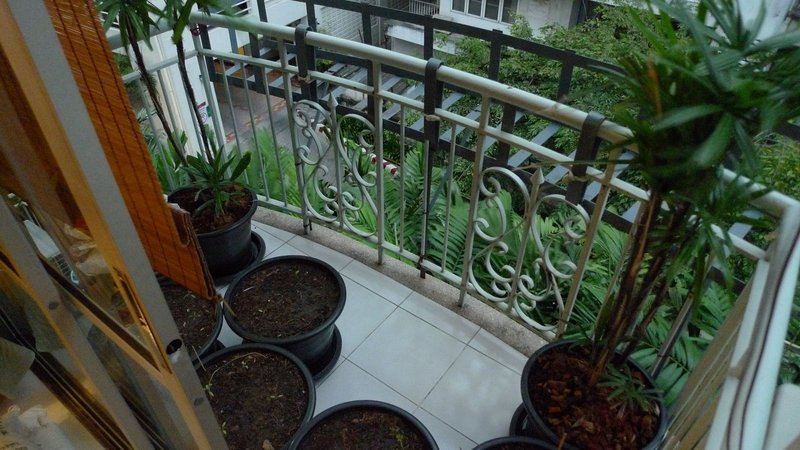 This kept them away from the full force of the monsoon rains, but of course did nothing to help the quality of the soil.  Oh, and they were also a pain in the nether regions to move. 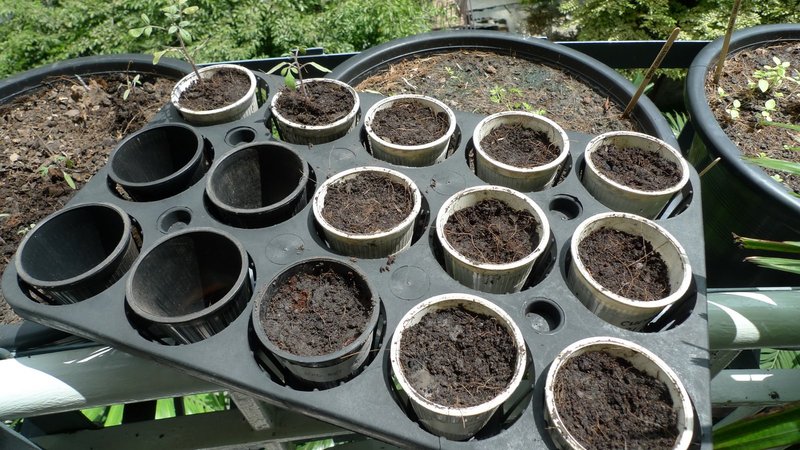 Finally, in late August I broke down and bought thirty small plastic containers, each large enough to start a single plant.  At first, I tried to transplant several of the existing plants including the two healthiest cherry tomato plants and several carrots.  I also started planting new seeds.  This tray-based system didn’t do much to improve upon the soil quality, but made it easier to get the plants out of the way of oncoming storms. 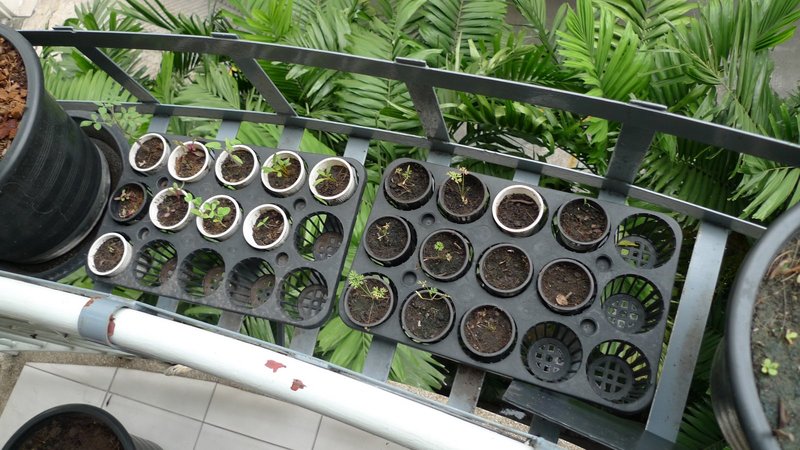 The new system seems to be working better.  With the exception of one storm that struck when I was away from home and had forgotten to bring the plants off the edge of the balcony, these seedlings have had the opportunity to grow in a much drier environment.  I’ve also been able to stagger plantings, starting a few new seeds each week. 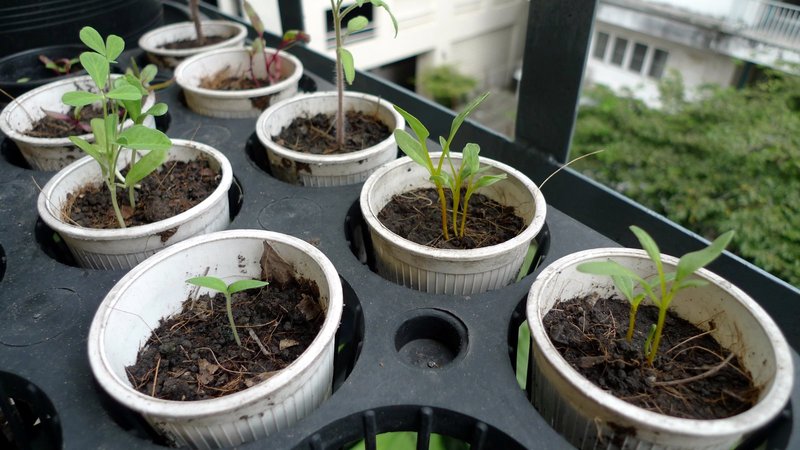 You can see that they are doing much better.  There are a few golden beet root plants on the right, and Dr. Zakiah’s methi seeds are going gangbusters on the left. 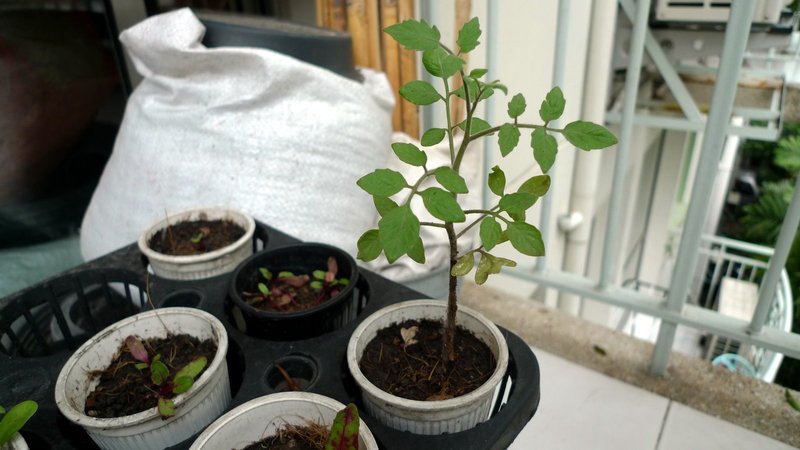 Best of all, one of my transplanted cherry tomato plants has continued to grow and seems to finally be hitting its stride.  In another two weeks or so I will transplant it into a somewhat larger container.  Before that time, though, I need to address the issue of soil quality.  I’ve brought the other planters in from the edge of the balcony so they can begin to dry out a bit, then I will go to the nursery and see what sorts of soil amendments I can find.  My father, who spent several years growing a massive garden in my childhood home, suggested chicken or horse manure.  Tawn isn’t so keen on that idea.  Stay tuned to see how much shit I have to deal with… literally.

Three weeks have passed since I rolled up my sleeves and started my balcony vegetable garden and while there are encouraging signs of life, there have also been a few lessons learned. 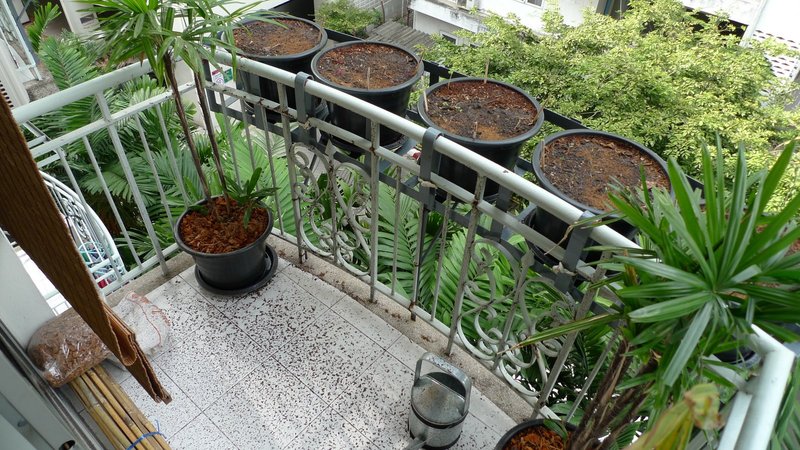 One of the first lessons learned, almost as quickly as I finished washing the dirt from under my nails, was that I should have started the seeds in small containers and then transplanted them once they grew larger.  With our heavy rains nearly each afternoon, the wee seedlings were being pummeled and the soil wound up splattered all over the balcony, creating a mess.  Plus, there is no direct sun on this side of the building for another month or so. 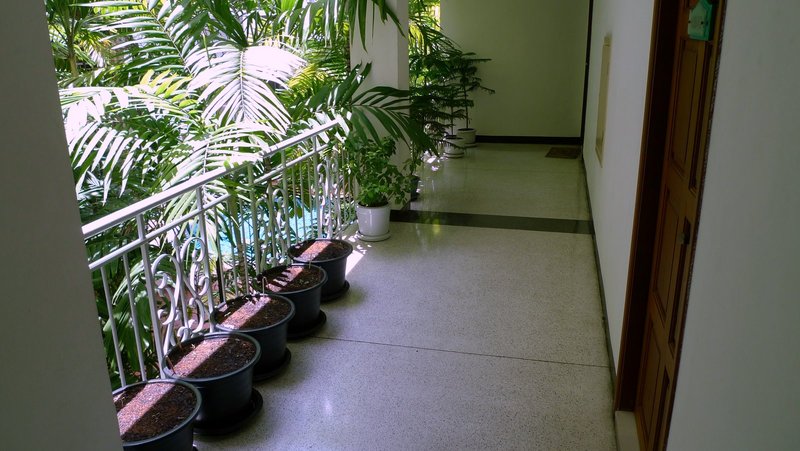 My solution was to move the pots to the hallway outside our units, where they enjoy some better protection from the rain and at least a few hours of sun in the mornings.  Soon, though, that sun will go away as the star passes directly overhead our building.  At that point, I’ll move them back to the balcony.

Here is a container-by-container update: 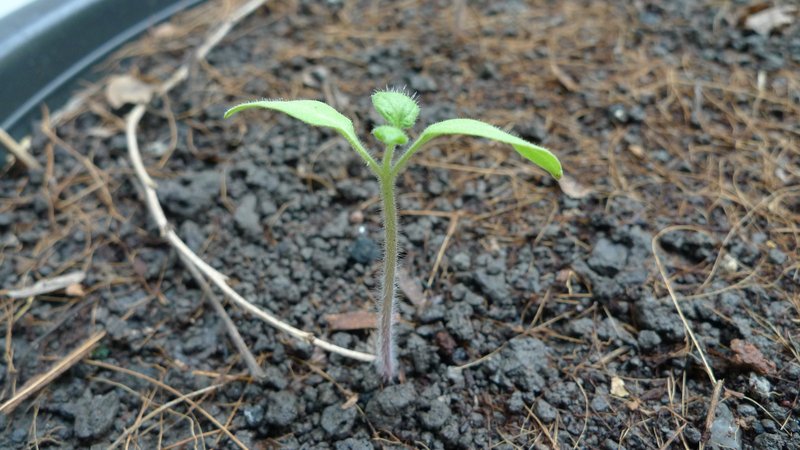 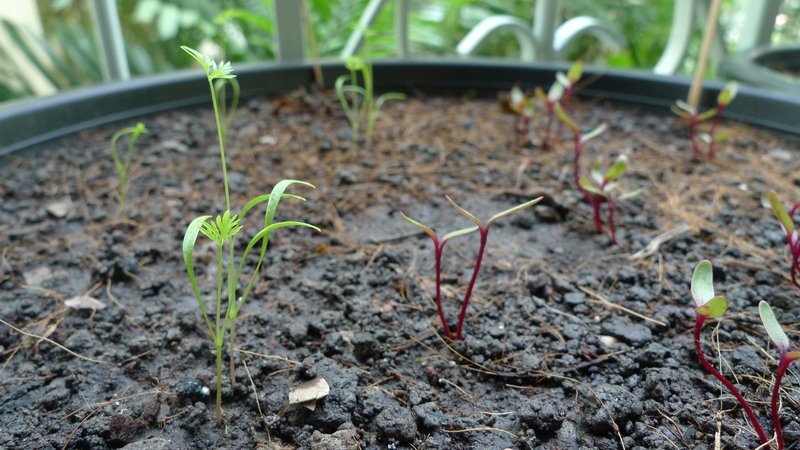 The carrots and beets seem to be doing well.  I think I didn’t grow enough carrots and I think my beets may be too crowded, but I’m happy to see the frilly leaves on the carrots – a sure sign that they really are carrots.  I’ve planted some additional carrot seeds in the open spaces between plants.  I realized that each plant produces only one carrot.  For some reason, maybe because I always see carrots in bunches, I expected I might get a bunch of carrots from one plant.  So much for having farmer’s blood in my veins.

The two mini bell pepper plants are doing well, also with a second pair of leaves forming.  There is another sprout coming up in the background but I don’t think this is a pepper plant.  Not sure what sort of interloper it is.  Curious, though, as I know I planted at least three pepper seeds. 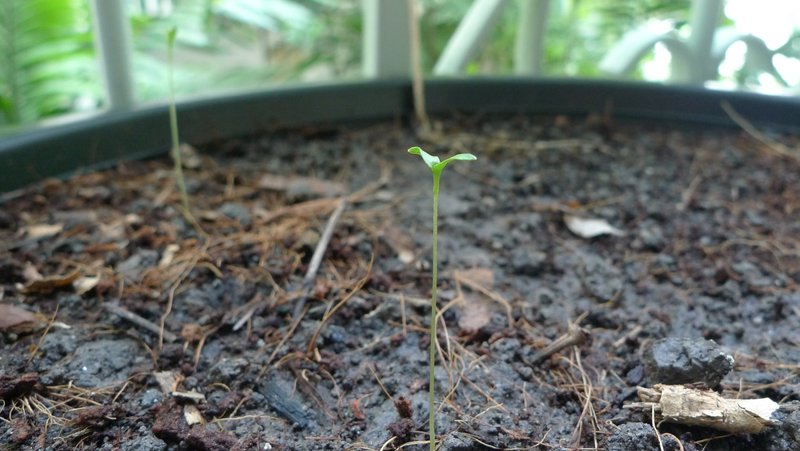 On to the mixed herbs container: These two stalks are growing in the area I planted parsley seeds.  I’m not sure what baby parsley plants are supposed to look like, but this isn’t what I had in mind.  Am I not looking for crinkly leaves?  Do those just grow in later? 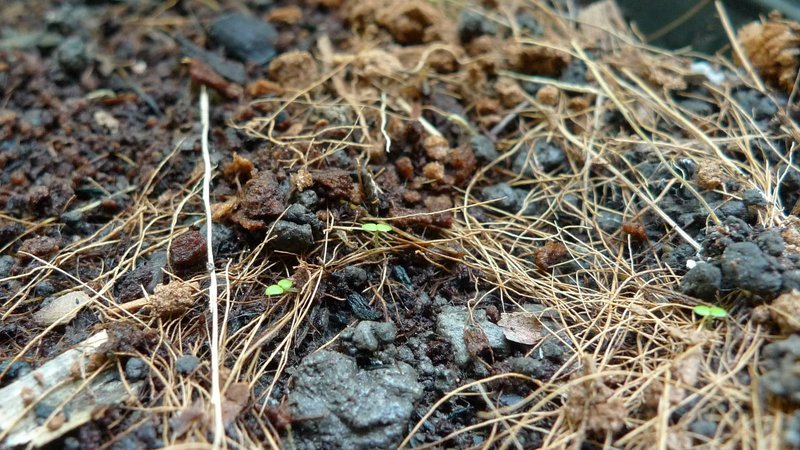 The first hints of what may possibly be cilantro peeking up through the soil.  These little green flecks have scarcely grown in a week.  The rosemary seems to be missing in action. 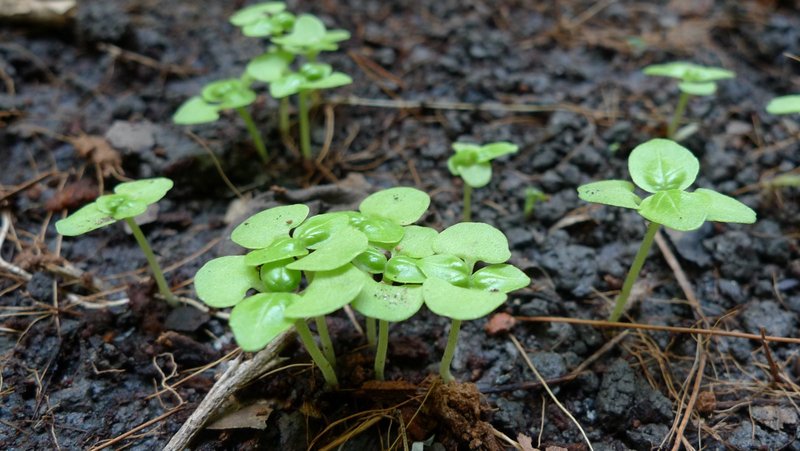 The Italian basil is doing well, not seeming to mind their close quarters.  I’m looking forward to having the basil developed enough to cook with, although I guess I could eat the young shoots, too.

That’s all from the farm.  Stay tuned for more details in another few weeks! 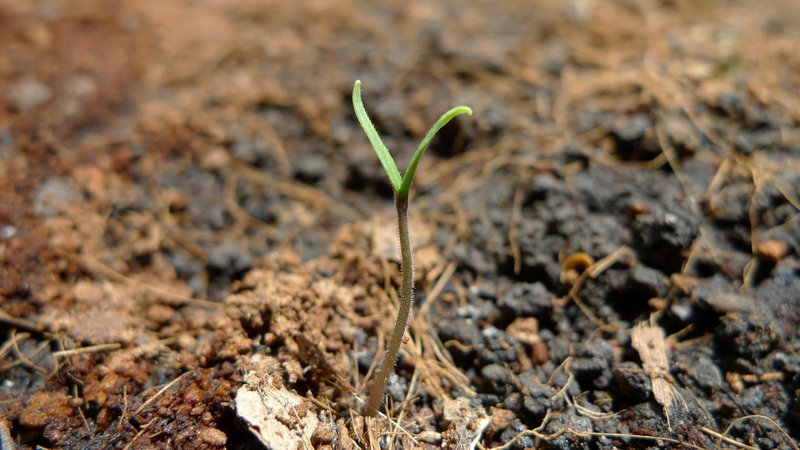 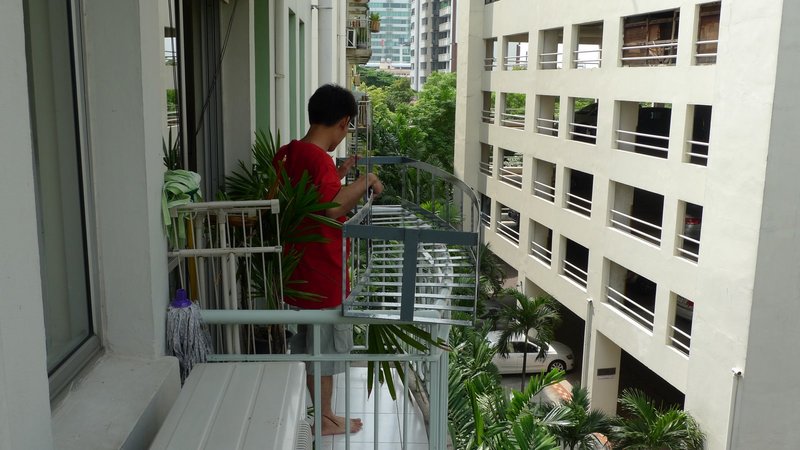 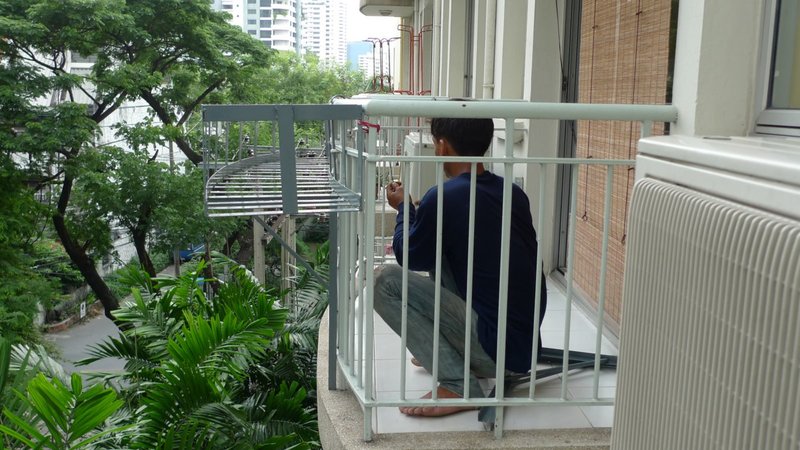 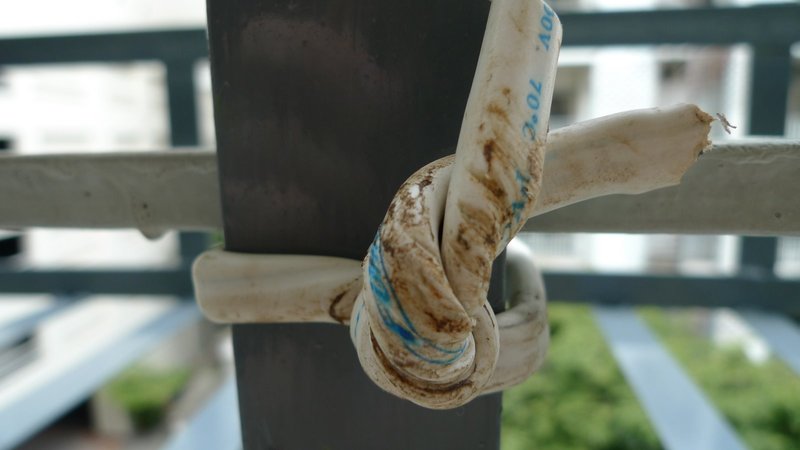 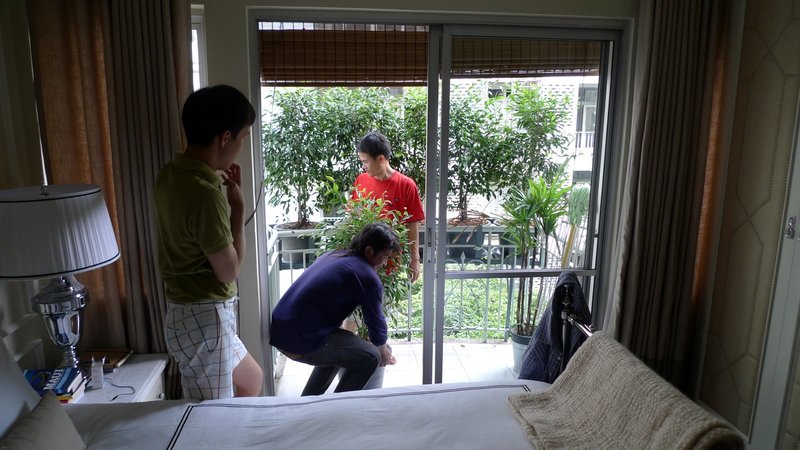 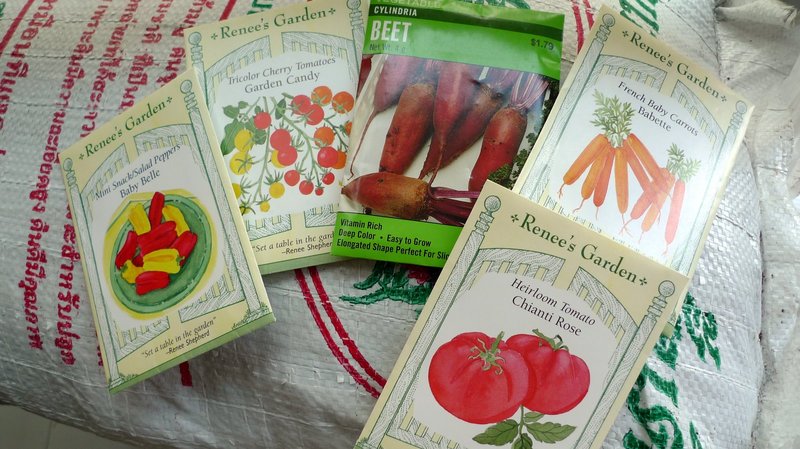 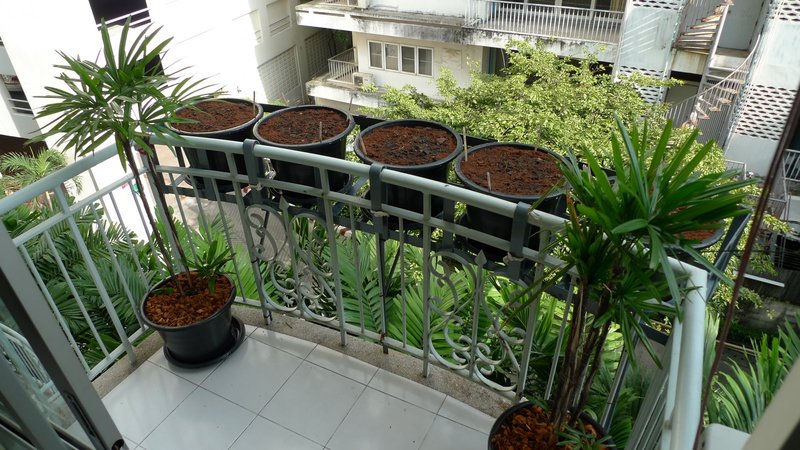