In times of fiery stress, we all find different ways to cope.  Nero played his fiddle (supposedly) while I turn to baking.  Truthfully, I started my baking well before the Red Shirt leaders had surrendered and the angry crowd turned into arsonists.  But I knew the army was making their move on the protest site and also knew Tawn and I would be stuck at home for the next few days, so a little bit of preparatory baking seemed wise. 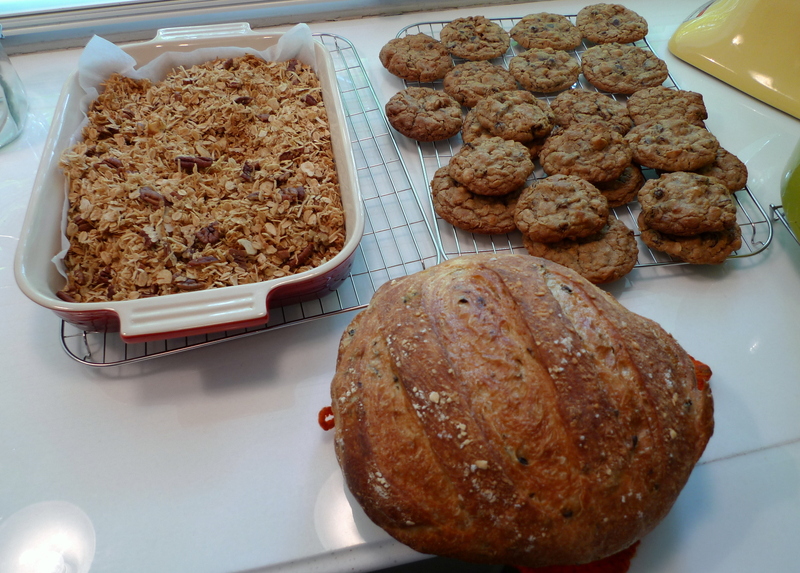 Based on a recipe for Chocolate Chunk Oatmeal Cookies with Pecans and Dried Cherries in the May/June 2005 issue of Cook’s Illustrated magazine, I omitted the cherries and then divided the batch in two, half with chocolate chips and the other half with raisins.  And instead of pecans I used macadamia nuts. 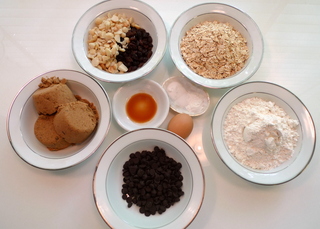 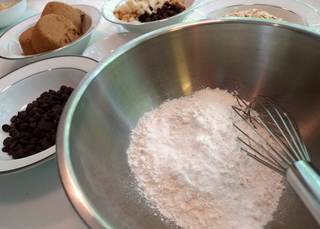 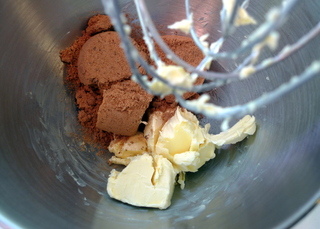 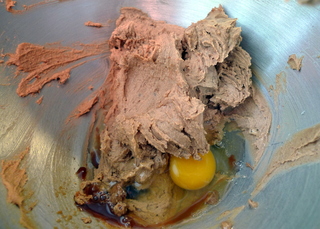 Cream together 12 tablespoons of soft but still cool butter and 10.5 oz of dark brown sugar.  Once combined, beat in one egg and 1 teaspoon of vanilla extract. 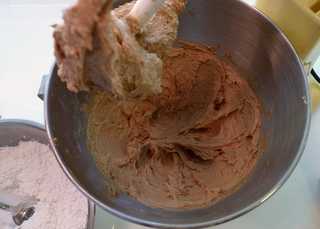 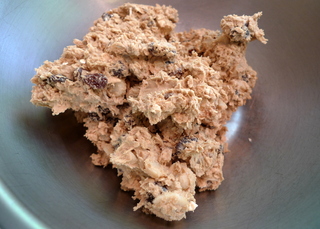 From there, add the flour until incorporated but be sure not to over-work.  Finally, add the mixture of oats and add-ins.  Before doing this, I divided my dough between two bowls, adding nuts and chocolate chips to one and nuts and raisins to the other.  But heck, you could combine all three together! 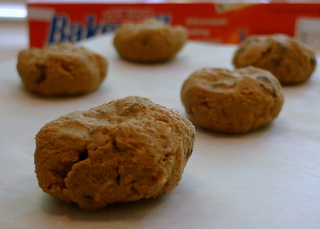 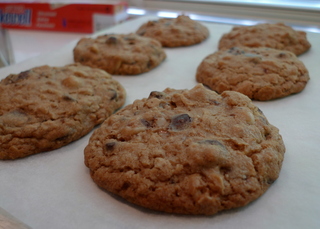 Scoop out heaping tablespoons of the dough, forming a ball then mashing it slightly.  Cook in a 350 F oven for about 12 minutes, rotating to ensure even baking. Take out of the oven while the centers of the cookies still look a little undercooked.  Let sit on the pan for another five minutes before transferring to a wire rack.  The cookies will remain soft and chewy this way, which is how I like my oatmeal cookies.  Cook for a few minutes longer if you prefer them crispy.  As my grandmother used to say, the world would be a boring place if we were all alike.

I love making no-knead bread.  It turns out every bit as nice as artisanal bread and it fills the house with a wonderful aroma.  Oh, and it is easy because you don’t have to knead it!

I make mine with 20.5 oz of flour, roughly and even split between bread flour and all-purpose flour.  You could substitute whole wheat for about half the flour, but up the yeast a little.  I mix into that a scant 2 teaspoons of salt, 2 teaspoons of sugar, and .75 teaspoon of yeast.  I stir it thoroughly and also add the chopped leaves from a few sprigs of fresh rosemary.  Dried rosemary does not work here.  Next, add one can of cold beer and stir the dough together.  You may need to add a little extra water, but only enough to pull together a pretty dry and stiff dough.  At this point you can add about a 1/2 cup of chopped olives, preferably kalmatta.

The secret to no-knead bread is time.  I fold the dough over a few times just to make sure there are no dry pockets and then coat it with a little bit of olive oil.  Put it in a bowl and cover tightly with plastic wrap, a lid, or aluminum foil.  Then put it in the refrigerator for up to 24 hours, folding it over once during the time.  This is when all the magic happens.  The dough kneads itself, forming beautiful, elasticky protein strands. 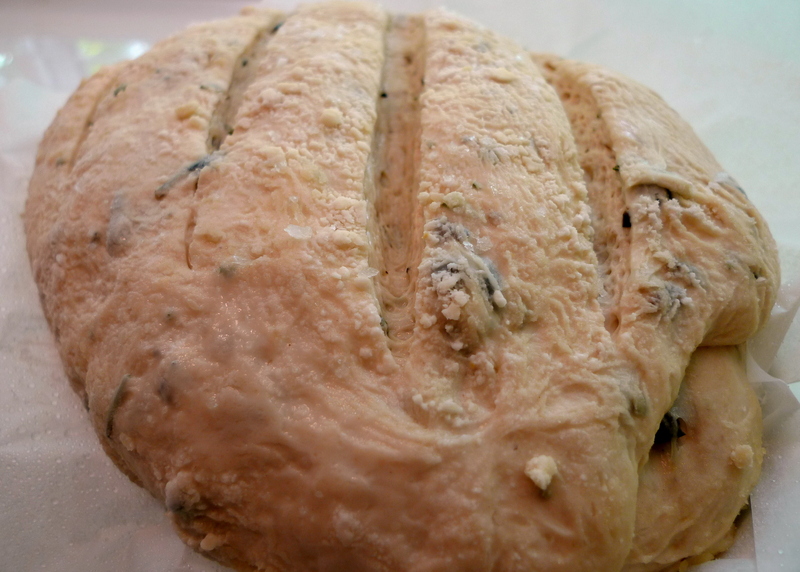 Then, take the dough out of the refrigerator, turn it over on itself another time or two, then place it covered in a cool room for another 8-12 hours until the dough has doubled in size.  Shape the dough into a loaf, deflating gently, and place on a parchment lined pie pan or oval casserole (if you want an oblong shaped loaf).  Cover with oiled plastic wrap and let rise at warm room temperature for another 2 hours or so until doubled.

Preheat a 500 F oven, preferably with a pizza stone in it to moderate the heat.  For the best effect, preheat a Dutch Oven (with lid) in your oven and, when ready and working very carefully, transfer the parchment paper with the dough into the Dutch Oven.  Spritz a half-dozen times with water and then place the lid on, returning to the oven.  After ten minutes, lower the temperature to 425 F and cook for another 30-45 minutes or until an instant read thermometer measures 210 F in the center of the loaf.  If you don’t have a Dutch Oven just cook it on the breadstone or on a baking sheet.  Will still turn out nicely but probably not as crispy a crust. 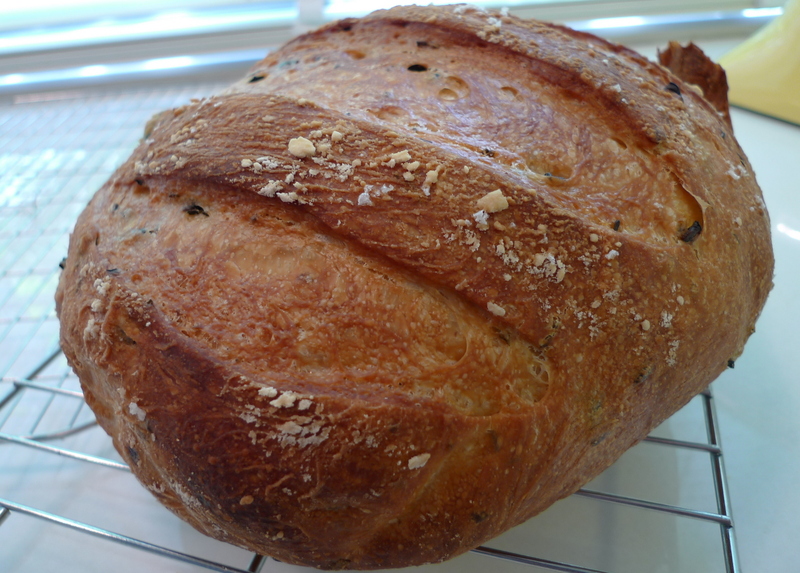 Use extreme caution when handling the Dutch Oven as it will be very hot.  Lift the finished loaf out using the parchment paper and let cool on a wire rack.

A few years ago when I was still living over on Asoke Place I got into a granola-making kick.  It is easy to make and relatively healthy, especially because you can control what goes into it.  Tawn wanted to have some granola and yogurt as a change in pace to our usual breakfast of oatmeal, so I pulled up Alton Brown’s recipe from the Food Network and made a few changes. 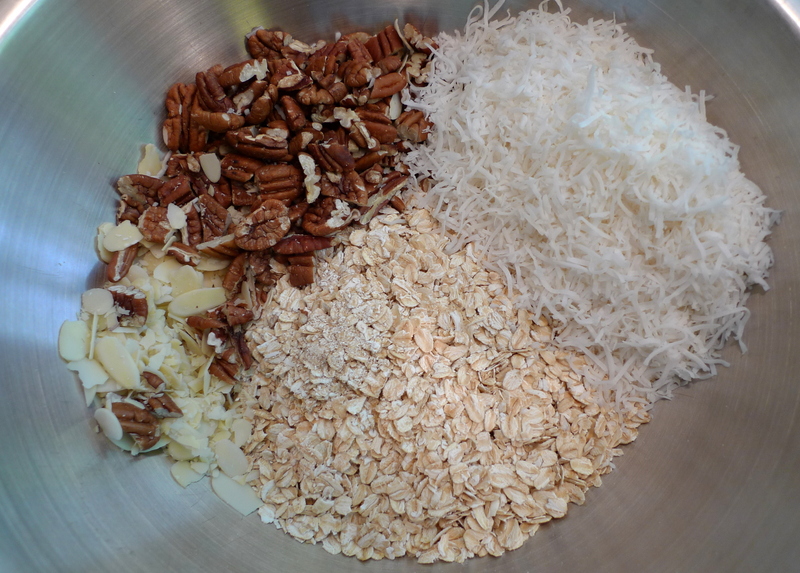 Mix 3 cups rolled oats, 1 cup slivered almonds, 1 cup cashews (which I substituted with pecans), and .75 cup shredded coconut.  You can also add wheat germ or other whole grains here to have some variety. 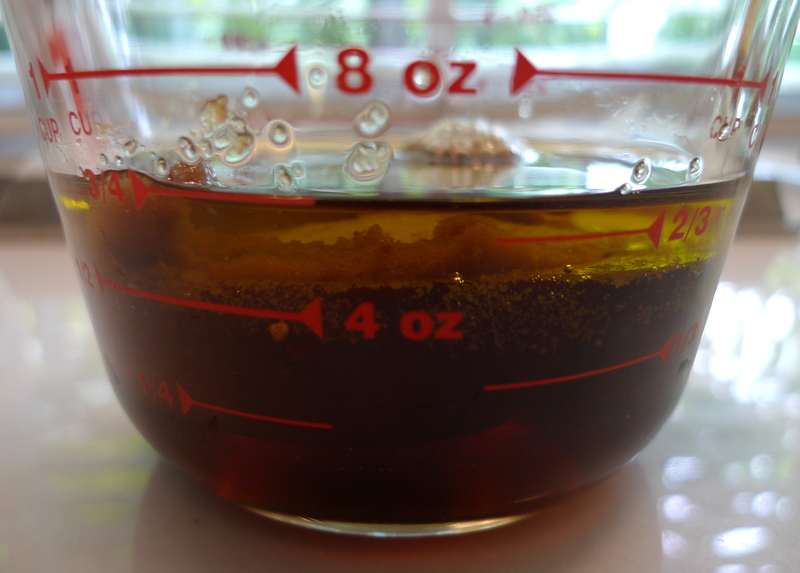 In another container, mix .25 cup vegetable oil, .25 cup maple syrup (or other liquid sweetener, I suppose), and .25 cup brown sugar.  I realized later that the brown sugar is supposed to be mixed with the dry ingredients but it seemed to work this way, too.  Please note that Mr. Brown’s recipe called for an additional 2 tablespoons of both sugar and syrup, which seemed a little too sweet for me.  In fact, you could substitute a little orange juice for some of the maple syrup to good effect. 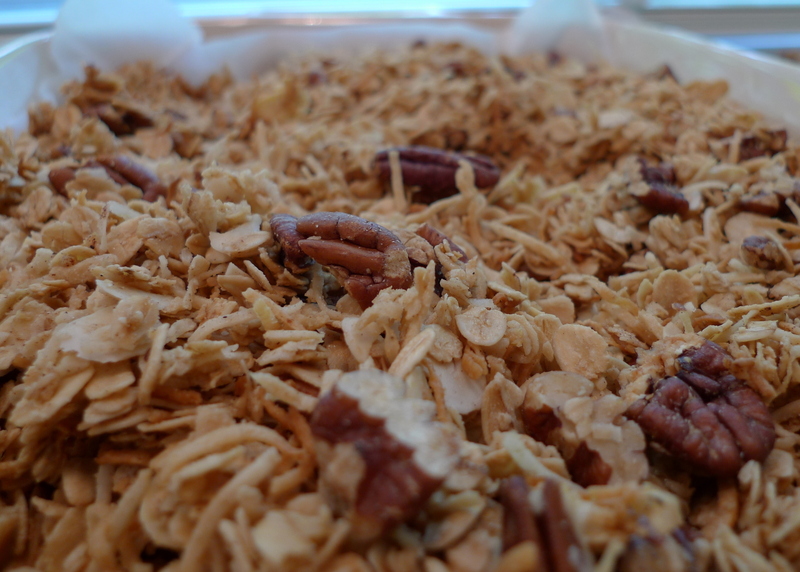 Pour the sugar-oil mixture over the dry mixture and stir for several minutes with the spoon until the mixture is evenly moistened.  Note that it will still seem pretty dry; you don’t want it sopping wet!  If you would like, you can sprinkle on some cinnamon, nutmeg, and/or ground clove to give it a little spice.

Then bake in a 250 F oven on some baking sheets, stirring every ten to fifteen minutes, for about 75 minutes or until there is a nice even golden color.  After the mixture has cooled you can mix in 1 cup of raisins and/or other dried fruit to taste.  Store in an airtight container once completely cooled.

Well, some might criticize me for doing something as trivial as cooking in the midst of Thailand’s worst political crisis in fifty years, but it seems to me that there is only so much depressing news a person can take.  After a while, it becomes an echo chamber and you just get overwhelmed by the rehashed images, sounds, and stories.  Best to do something productive in the kitchen, which nourishes both your soul and your body.