After the last entry about the shooting in Cole Camp, I’ve been surprised by the number of people who were directed to my blog from a variety of sources including the Sedalia (Missouri) Democrat’s website, a local newspaper.  Along the way, I’ve received messages from several people who lived in and around the town and who knew (to one degree or another) the victims.  Many thanks to all who have visited and those who have left words of support.

Part of me feels like writing another entry, particularly one just about everyday life, is a bit trivial.  But life does go on and it is for the living, so I’ll pull another entry together and, with it, try to celebrate and honor the memories of all victims of violence.

Last weekend Tawn and I headed down to the “old city” – defined as Ratanakosin Island, the heart of the original city of Krungthep – to search out some coffee.

Last October while we had a guest in town, I had about two hours to kill while the guest was conducting an audio walking tour of the old city.  Taking a break in a small family-run coffee shop called Mari Green Coffee, I got into a conversation with the proprietor and discovered someone who takes his coffee even more seriously than I do.

He chooses only Arabica beans grown in northern Thailand and is very picky, explaining to me in detail about the noticeable difference and quality and taste from one mountain ridge to the next.  He then roasts these beans himself in small batches about once a week.  Needless to say, the coffee there was great.

Months later, having finished up a supply of beans from the US – previously I was buying these wonderful fair trade organic beans from a co-op based in Chiapas, Mexico, organized and sold by Cafe Mam – I decided on a return visit to Mari Green Coffee and support the local coffee industry.  Plus, I’m starting to realize that I need to be more selective when deciding what to bring back from the US.  Five pounds of coffee takes up a lot of space in the suitcase.

For fun, we invited our friend Bob along, since he was also in the market for some more coffee beans.  Ironically, I didn’t get a single shot of the coffee shop itself.  Will have to do that next time.  While we were waiting for the owner to prepare the coffee order, we enjoyed some banh xiao – Vietnamese rice crepes – and explored the surrounding area. 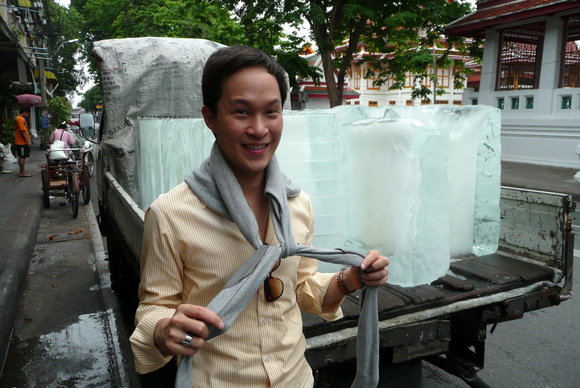 The coffee shop is a few doors down from an old fashioned ice factory, where they take big blocks of ice, chip them, then deliver them around the city.  Tawn was a little chilly standing by the delivery truck. 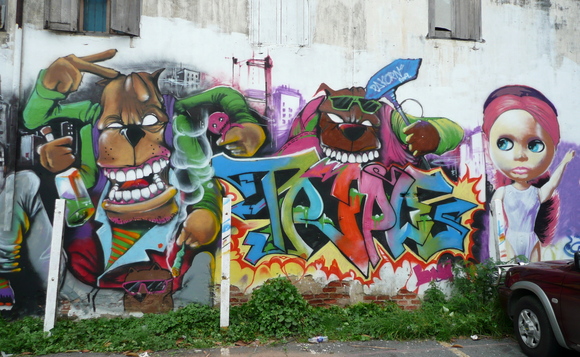 A block over we found an intense bit of graffiti, something we don’t see a lot of here in Krungthep and never so elaborate. 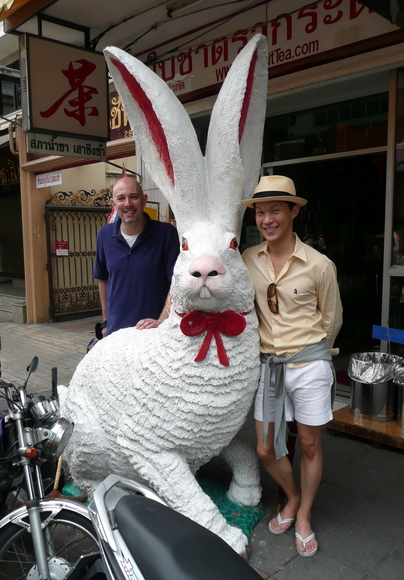 Down the street across from the Tiger Temple was a tea shop (Mari Green Coffee’s competitor, I guess!) that had a huge white rabbit outside.  Tawn was born in the year of the rabbit, so a picture was inevitable.

We picked up our coffee, thanked the proprietor, and headed on with our day followed by the heady aroma of dark-roasted coffee beans.