Daylight Saving Time has ended – yeah, an extra hour this morning before departing to the airport.  Holly and I are sitting around her living room watching New York 1 for local news, drinking coffee, and I’m thinking about walking down to the corner bagel shop for one last taste of New York.  Thai Airways webite is showing an on-time departure (hours and hours before departure) for my flight.

Saturday night it was a pleasure hanging out with Keith and Aaron for about ninety minutes.  Keith had his “Boyfriend-aholic” t-shirt on, which seems appropriate.  Had a good conversation with Aaron about a little puppy that has been following him around!

I walked down Seventh Avenue to Blue Hill and thankfully allowed myself enough extra time because I overshot the restaurant by six blocks.  It is in that section known as Greenwhich Village – the point where the grid of streets ends – that I got confused.  Holly was just starting on a glass of Pinot Noir at the bar when I arrived, spot-on at 9:00.  We had a fantastic dinner, that only could have been improved with the presence of Tawn and you, of course!

The celeraic soup, served in a tall, thin shot glass, was very tasty and quite hot.  It had a infused foam on top that was really a nice textural contrast to the rich soup.  The butternut squash sorbet, served on a demitasse spoon, was richly flavored and subtly sweet.  Very interesting and buttery but the flavors are better as a soup.

The bass and the rose wine were the best pairing.  The bass had a seared crust with a tomato-pepper vinaigrette that absolutely melted in your mouth.  The rose, which was enjoable on its own, just jmped to life following the bass and the flavors continued to evolve for the next several moments.

The cod was very lightly cooked, tender and flaky.  The broth was a high point full of great crustacean flavors that I sopped up with one of the fresh soft breadsticks.

The lamb, an unusual choice to serve a generous portion of loin, was lightly breaded on one side, tremendously tender and flavorful, and also a bit too salty.  The banana squash slice was delectable and wild mushrooms and chestnuts captured the season beautifully.

Of the desserts, we suggested to the server afterwards that the order should have been reversed.  The cheescake was served in individual small preserve jars and had a small dallop of bitter chocolate on top.  The cake increased in richness the deeper you dug and the chocolate had an interesting counter-note of saltiness.  It was very enjoyable, but had been completely overshadowed by the amazing buttermile panna cotta.  Like a fresh yogurt, the tangy creamy base had a layer of plum marmalade that was bursting with ripe fruitiness.  A wedge of plum sorbet added a coolness to the whole thing.

It was an absolutely fantastic meal and I can’t wait to return to Blue Hill again. 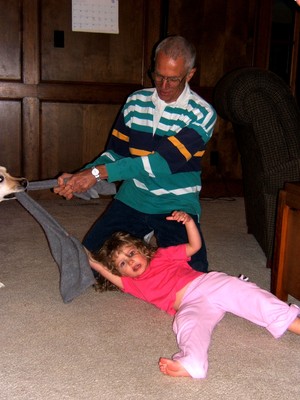