Songkran is the traditional Thai New Year’s festival, a three-day holiday held each April at the height of the hot season.  The meaning of Songkran has been subject to much debate and over the past many years it has evolved into something much different than it originally was.  This year, however, Bangkok was caught up in a great Songkran scandal that, according to several local pundits, revealed the hypocrisy with which we choose to view “culture” and what is “appropriate”.

At its roots, Songkran is something of a harvest festival, a time of cleaning up after one year and getting ready for the next rice-planting season, which will begin when the rainy season arrives shortly after the peak of hot season.  Water has always played an important part in the Songkran celebration, and traditionally the holiday was celebrated by performing the “rot naam” (pouring of water) ceremony. 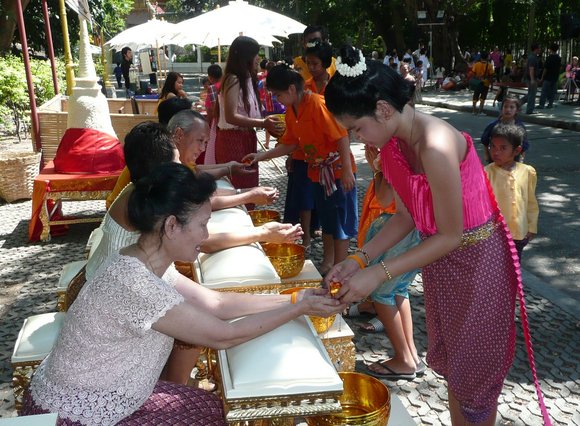 In this picture I took three years ago, school children dressed in traditional Thai outfits pour water over the hands of their elders.  This is a way of showing respect and blessing them. 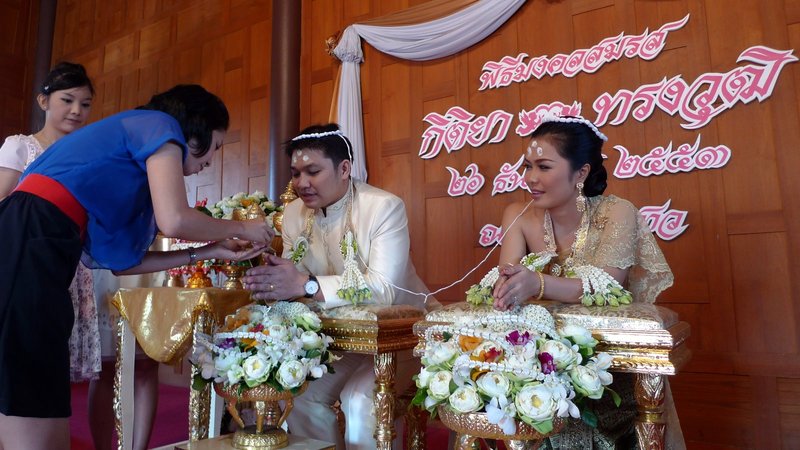 In fact, this same ceremony is performed when a couple is married, as in this example from my Thai teacher’s wedding this past December. 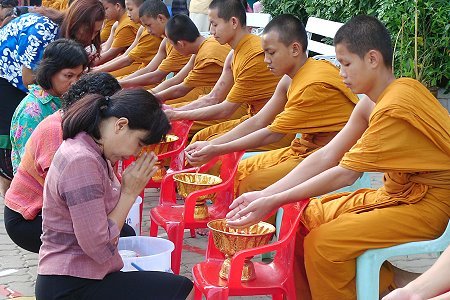 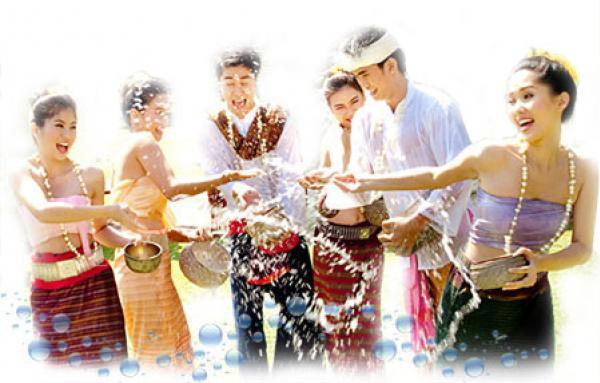 So those are the traditional celebrations of Songkran.  Given that Thailand is a hot, tropical country it is no surprise that along the way some amount of splashing about with the water also happened.  So Songkran started to get a reputation as being “the water festival” and was thus stylized by the Tourism Authority of Thailand.  A little bit of playful, good natured splashing for the youngsters to engage in, if you will. 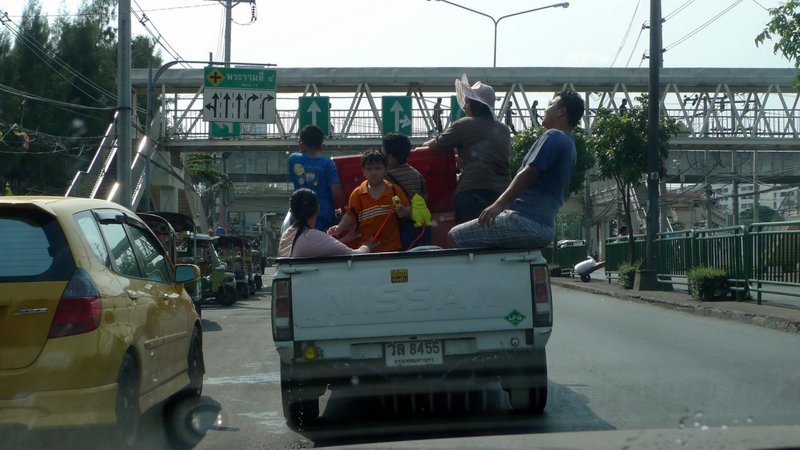 Somewhere along the way, though, it evolved into something more: a water war with roving mercenaries with pump-action water guns.  This picture above is typical – families or young people fill up large tubs in the back of a pickup truck with water (usually with some blocks of ice in them) then drive around the city looking for revelers in other trucks or playing by the side of the road.  An impromptu water fight ensues.

Often, though, it isn’t just the revelers who are involved.  Anyone on the street – including those who are not interested in playing – are targeted with ice cold water.  A favorite target is passing motorcycle drivers and as you might imagine, there are any number of accidents in which motorcyclists lose control and crash after being splashed unexpectedly. 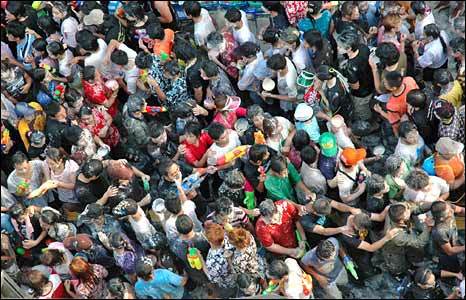 In some sections of the city the celebrations turn into chaos, the streets shut down with people splashing each other with water and smearing each other with talcum powder.  Needless to say, the partying is fueled by substantial quantities of alcohol.

Which leads us to this year’s scandal.  Let me start by making clear that, while I don’t particularly enjoy the mess that Songkran has become, I also don’t have a bone to pick with it.  I either get out of town during the holidays or stay indoors to avoid unwanted splashing. 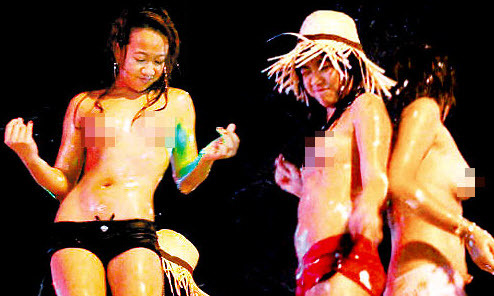 The scandal began when video clips appeared showing a trio of young women – reportedly ages 13, 14, and 16 – dancing topless on a vehicle along Silom Road.  Worth noting is that Silom Road is adjacent to one of the more famous red light districts in Bangkok where you can find things much more racy than this.

As you might imagine, there was a big fuss over this nudity and there were no shortage of pundits and officials tripping over themselves to proclaim what an insult to Thailand and Thai culture this was.  In a statement, Culture Minister Nipit Intarasombat said, “the clip has negatively affected the image of Thai culture and that all parties involved with such behaviour should be punished, while asking police to give importance to this issue, for it destroys the country’s reputation.” (emphasis mine)

The girls surrendered to the police, were made to publicly apologize, and were fined 500 baht (about US$16) each, and released.

As for the hypocrisy that was pointed out by several observers?  Well, that comes in two parts.  The first is the “oh, that’s too damn funny” part.  Reportedly, at the time of this whole scandal, if you went to the website for the Thailand Ministry of Culture, the following art was displayed on the page banner:

The picture shows some young Thai girls dancing topless in what looks like a water festival, right?  This was quickly picked up on by the denizens of the internet who hooted and hollered, posting and tweeting about how the Ministry of Culture was both promoting and punishing topless Thai teens at the same time.

In no time at all – as one observer pointed out, on a Sunday, nonetheless! – the nubile nipples were replaced with this classical Thai picture which, if you look closely, also has some bare breasts displayed in it.

Several other commentators pointed out that the impromptu redecorating of the Ministry of Culture’s website wasn’t the real hypocrisy, though.  They explained that the real hypocrisy is that Thai society has long treated women and girls poorly.  The sex industry here, the vast majority of which serves Thai men, not tourists, is founded on the treatment of women as sex objects.  Young women and girls are sold into sexual slavery and rape is often not reported or, when reported, the women are treated as the guilty party for bringing shame on their family by not keeping quiet.

Now, I want to make clear that I’m not singling out Thai culture for its hypocritical treatment of women.  I’m just reporting on the controversy that erupted here.  Plus, hypocritcal treatment of women is something that is too common almost everywhere in the world.  But as a number of cooler-headed commentators pointed out about this event, the trio of topless girls aren’t the cause of the problem.  They are the symptom of larger societal attitudes that need to be discussed and addressed.  I wonder if this event will provide a catalyst for that discussion to begin?