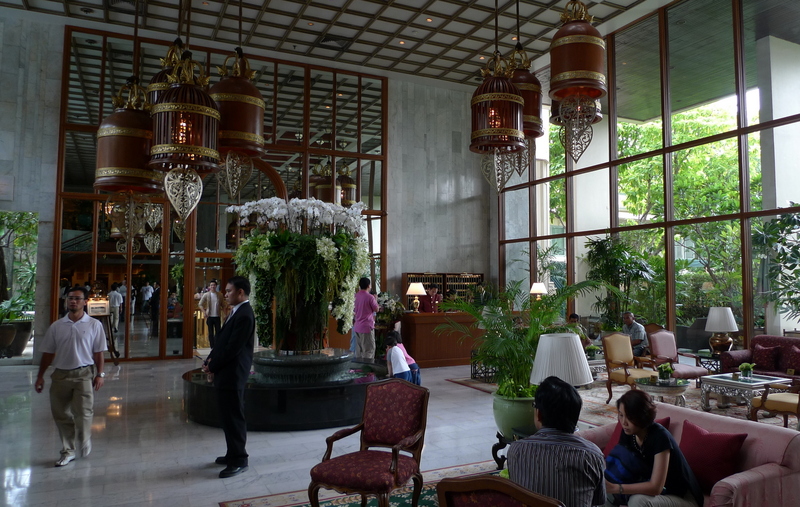 The Mandarin Oriental Hotel in Bangkok, which traces its history to 1876 as the first hotel in the Kingdom of Siam, remains one of the finest hotels in Asia.  Its legendary service and refined elegance leaves you half-expecting to find such famous visitors of years past as Somerset Maugham and Noel Coward sitting in the lobby or the colonial-style Authors’ Lounge. 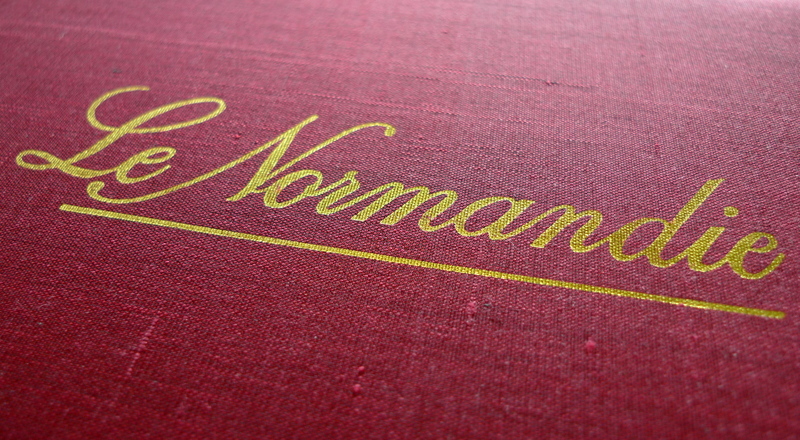 Sitting atop the 10-story Garden Wing, which was home to Thailand’s first elevator (1958), is the most famous French restaurant in town: Le Normandie.  It was there that we gathered for lunch Sunday afternoon to celebrate the marriage of one of Tawn’s university friends, Ko.  She and her husband Per were married in a civil ceremony in Sweden a few weeks back.  He will move here later this year and their Thai wedding celebration, certain to be much more lavish, will be held in December. 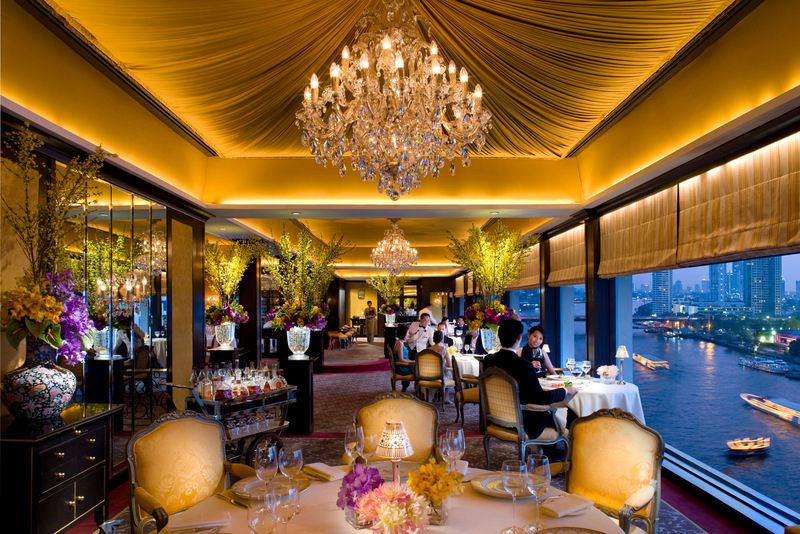 Joining Ko, Tawn, and me was their other university friend, Bim.  Both Bim and Ko are foodies, so this seemed as good a place as any to indulge and celebrate.  Le Normandie, which is elegantly appointed in buttery yellow silks, mirrors, and fine chandeliers, has a view and a price tag to suit.  What isn’t widely known is that each summer, which is low season here in Thailand, Le Normandie offers a summer prix fixe menu – this summer only 1100 baht  ($35) for three courses. 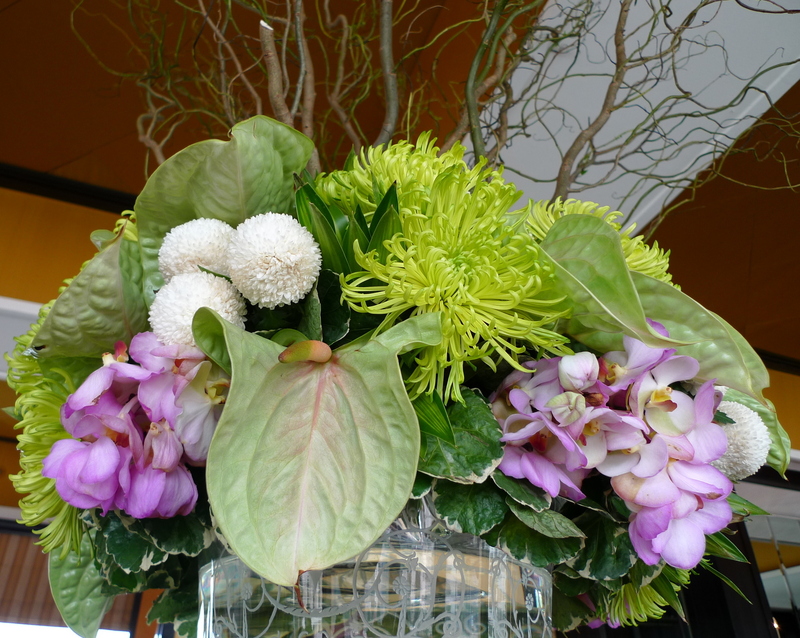 In addition to the beautiful wall treatments and lighting fixtures, both sides of the room have floor-to-ceiling windows offering spectacular views of the city on one side and the Chao Phraya River on the other.  The dining room is decorated with beautiful arrangements of fresh flowers, too. 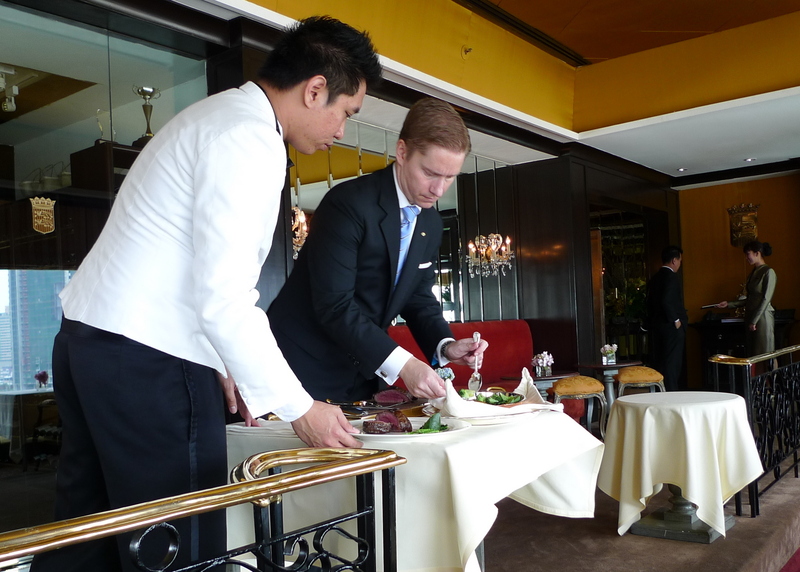 Something that you are paying for at Le Normandie is the service, which is every bit as prompt and attentive as you would expect in a fine restaurant in Paris.  The roast is carved tableside, plates are placed at the table simultaneously by the waiters, the proper utensils are discreetly placed on the table between courses, etc.  Living in a city where most of the fine dining restaurants struggle to get the diners’ main courses to the table within ten minutes of each other, having the plates gently placed on the table at the same moment is a thrill! 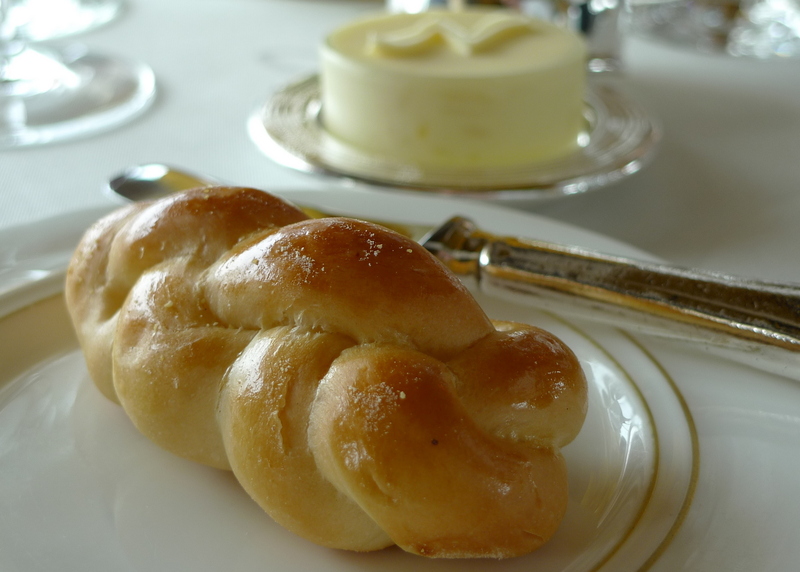 Fresh breads of all sorts were brought before and throughout the meal, a variety of brioche, whole grain bread, sourdough, baguette, etc. that were freshly baked that morning and served warm.  The butter was molded with a italicized “N” on top, served in a proper glass dish with silver lid. 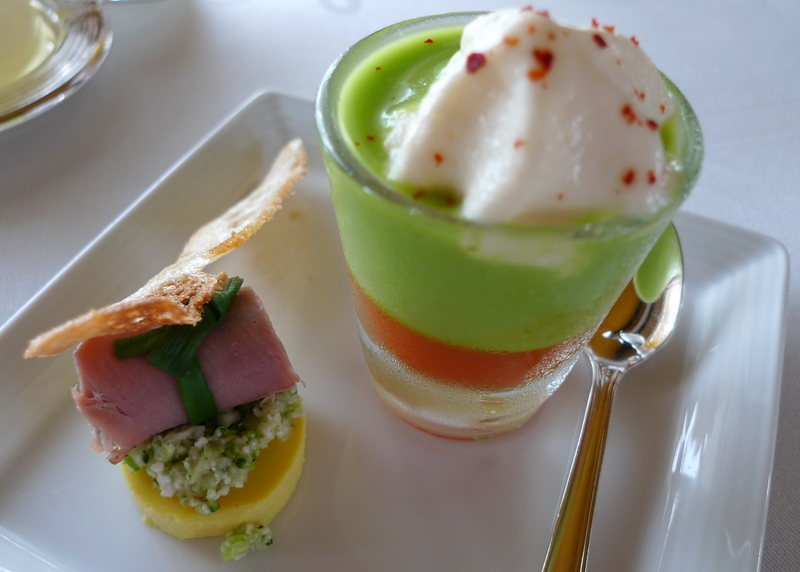 After ordering, the chef sent an amuse bouche to tease our appetite.  Sorry that the focus on the right isn’t sharp.  The shot glass is a tomato jelly with avocado soup and a passion fruit foam.  On the left is a slice of squash mousse with broccoli salad topped with a roll of chicken mousse wrapped in thinly sliced duck breast.  Yummy! 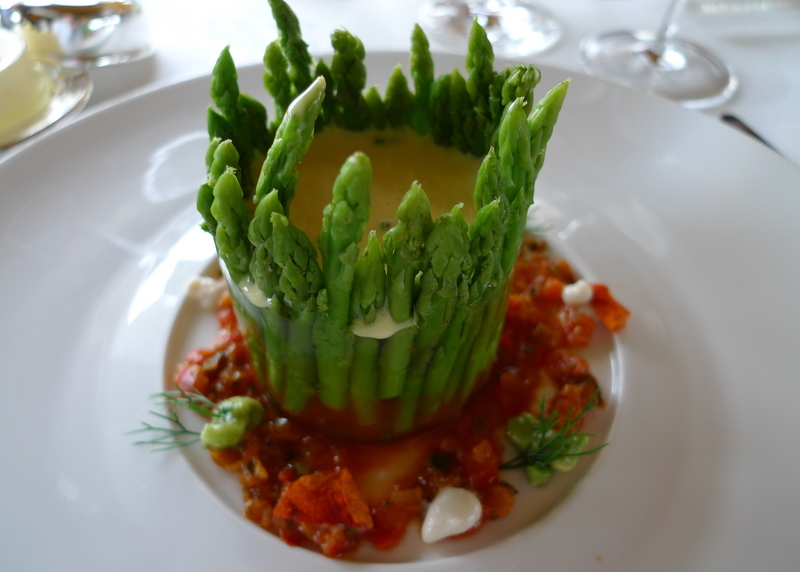 Translating that further, that base was formed of asparagus spears set upright in an aspic, or gelatin, base.  The poached egg, served cool but with a runny yolk, was inside the “crown” of asparagus and held into place with a little more aspic.  The vegetables around the base were mostly tomatoes and pepper and had a nice saffron aroma.  Once the plate was served, the waiter came over with a sauce dish of warm poppy seed cream and spooned it into the center of the crown. 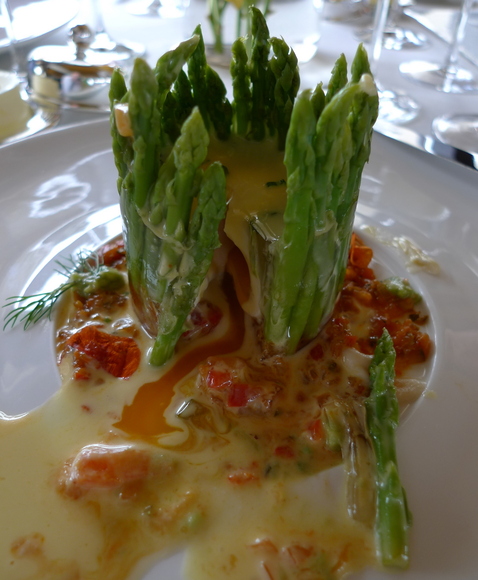 When I cut into it, the cream and egg yolk came running out in what was both an amazing, and an amazingly beautiful, mess.  The dish was really nicely prepared and what was especially pleasing about it was the amount of effort and technique that had gone into it.  It was a good example of the elevation of food to art. 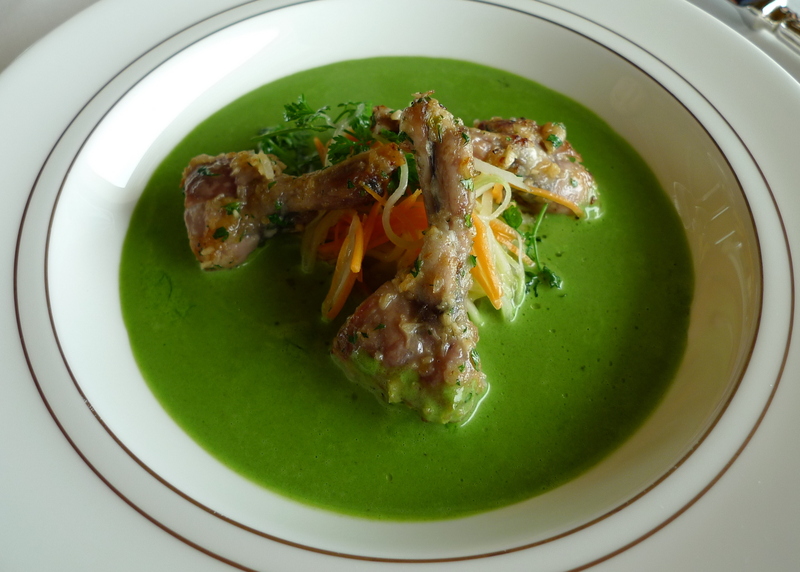 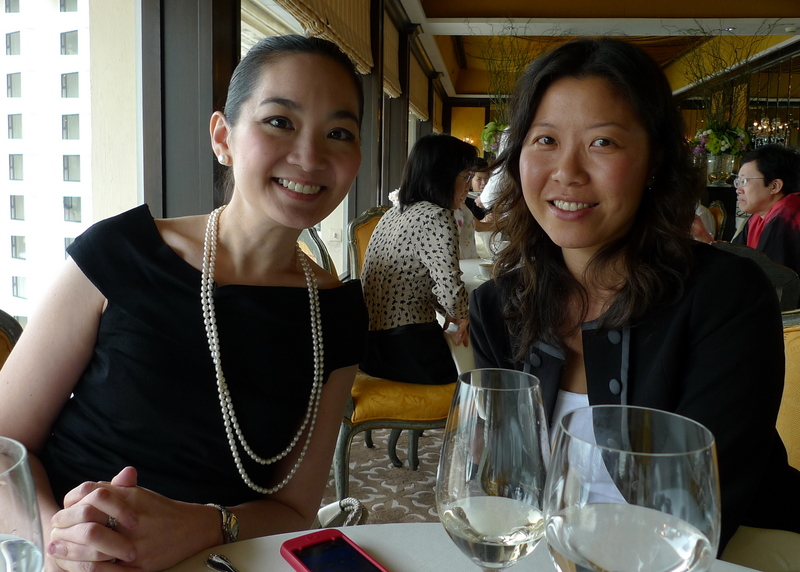 Between courses, here are the beautiful and intelligent Bim (left) and Ko (right).  While there were many other friends who couldn’t make it, I can’t imagine anyone who would have been better to enjoy this meal with. 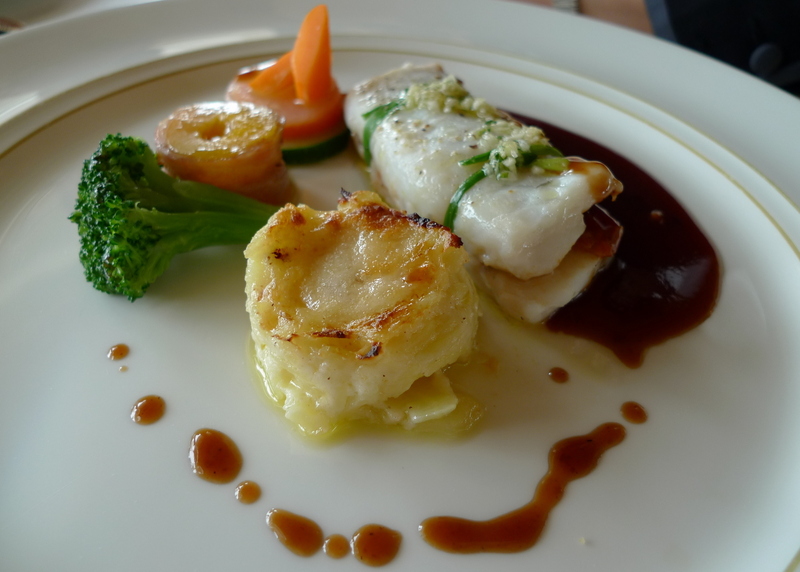 The main courses were just as artful and tasty as the entrées.  Bim and Ko both had the filet de Saint-Pierre confit, croustillant de lard Ibérique a l’abricot et jus a la vanille, which was a John Dory fillet with apricot wrapped in Iberico ham and a vanilla-berry essence. 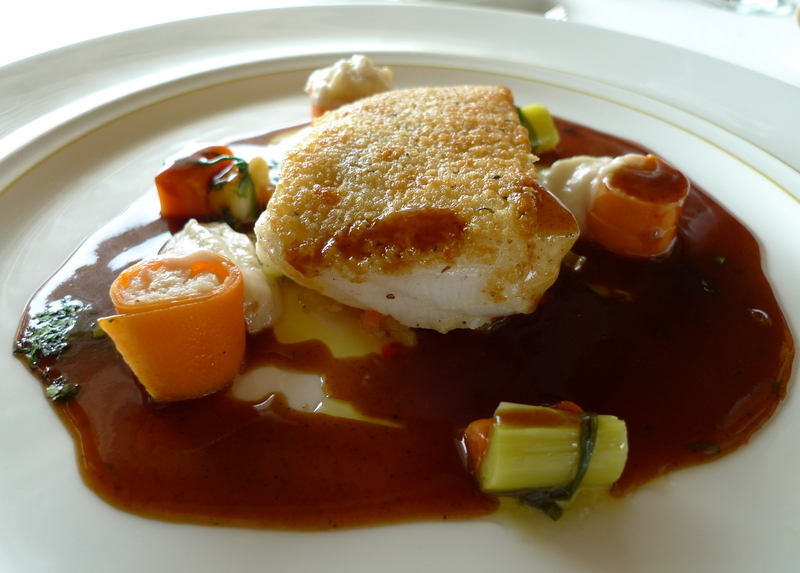 Tawn had the cabillaud à la Boulangère, vin de Jura, cappuccino des sous-bois et sauce au café , which was cod fish Boulangere style with Jura wine, forest mushroom cappuccino and a coffee sauce.  The fish was beautifully prepared, moist and flaky.  The sauce was interesting as it had just the faintest hint of coffee to it. 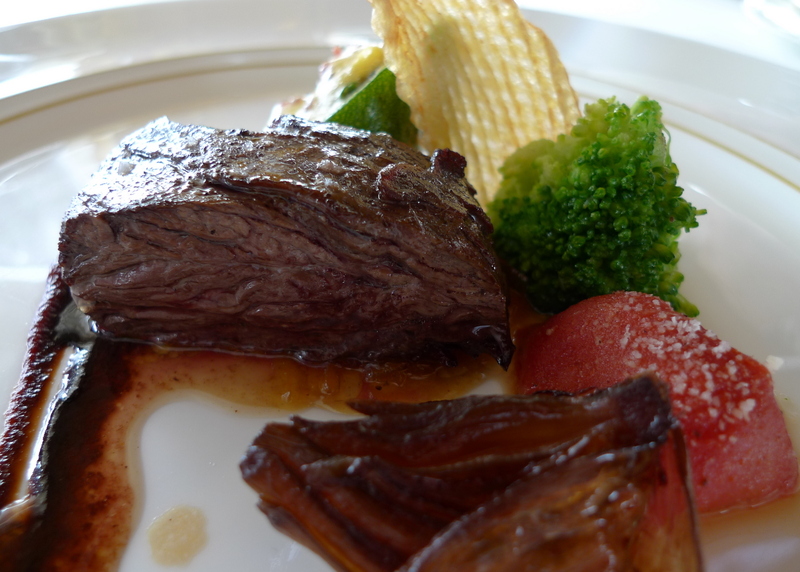 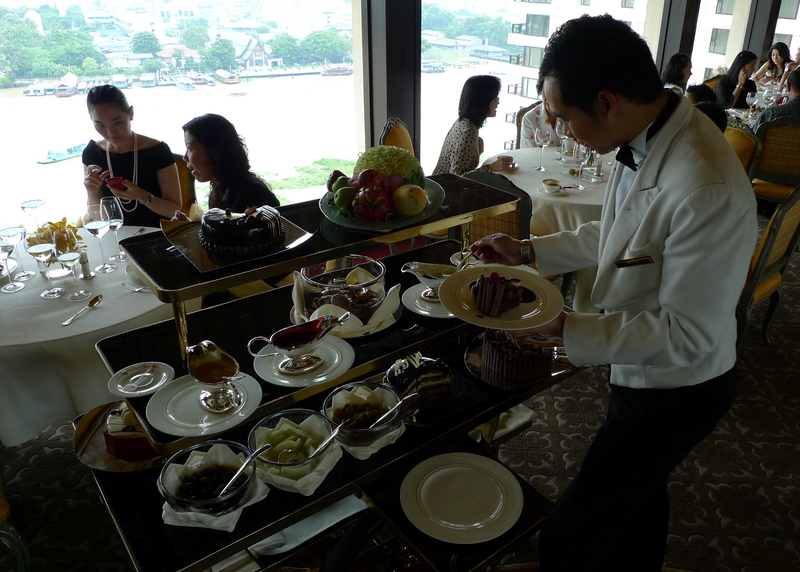 After the main course, the dessert cart was rolled over, featuring a half-dozen types of cakes and four stewed fruit compotes including fig and rhubarb.  We could choose two selections and the waiter prepared each plate, saucing and decorating it differently.  It took about five minutes per plate but the results, as you can see below, were beautiful. 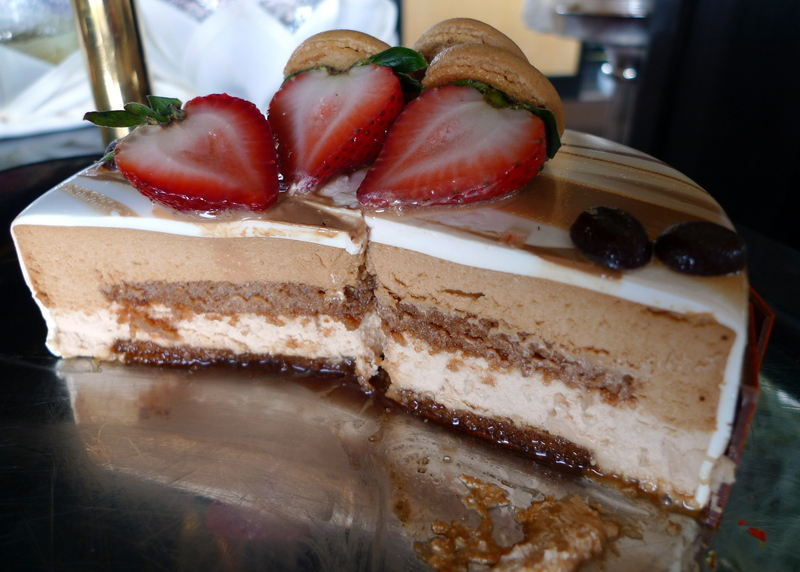 A cappuccino cake that was calling to me from the dessert cart, although I settled on this one instead: 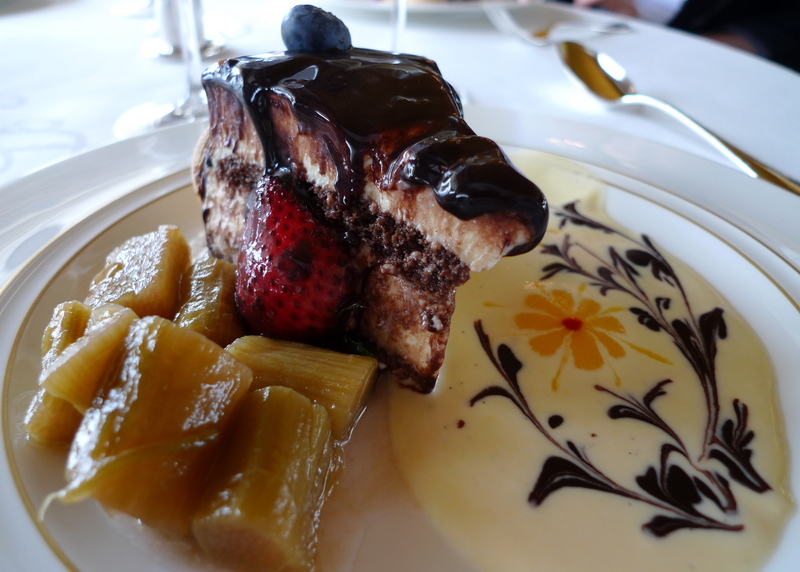 My marscapone cheese cake with vanilla sauce and rhubarb compote. 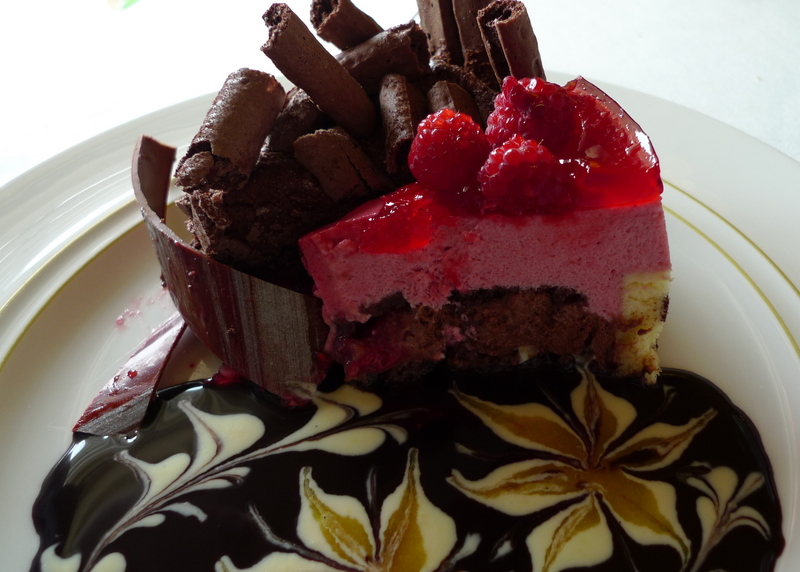 A raspberry mousse cake and a chocolate cake – Tawn’s selections. While tea and coffee were served, two trays of beautiful and tasty macarons were served: chocolate-raspberry, caramel, chocolate-orange, and green tea. 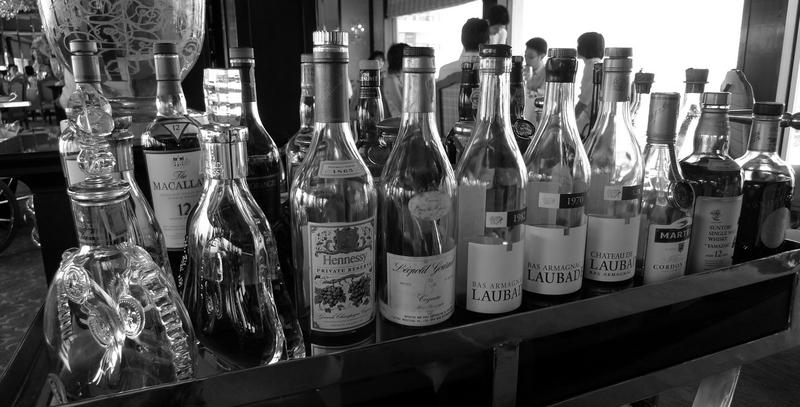 While we didn’t partake of them, there was a cart loaded with fine after dinner drinks.  I’m not a brandy drinker, but there is something about an after-dinner drink that seems very refined. 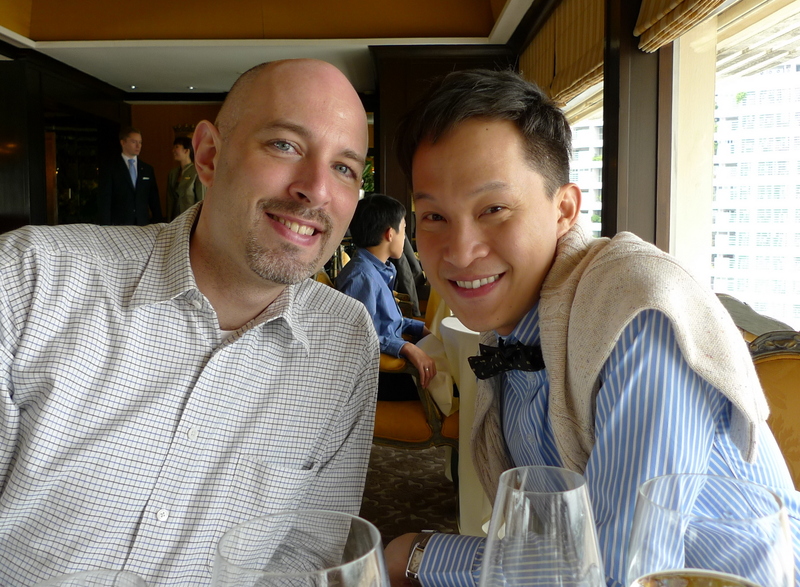 After an enjoyable, nearly three hour dining experience above the banks of the Chao Phraya River.  What an elegant and pleasant way to celebrate a friend’s wedding.  If only her new husband had been there to enjoy it, too!