Catching up on the events of the past month or two, in late October I attended an annual Halloween party at the Mercy Center in the Bangkok neighborhood Khlong Toei. Mercy Center, founded by a Catholic priest who has been a longtime fixture in the surrounding slums, provides extracurricular activities and ongoing education for local children. The Halloween party is pulled together by several business owners associated with the American Chamber of Commerce.

This was the second time I volunteered and this year I scored the assignment of working the face-painting table. While we had lots of face paint, our tools were limited and the children had high expectations: Zombie! Dracula! Ghost!

Regretfully, I hadn’t the tools to make her as beautiful a butterfly as on the package, but she seemed pleased with the results. I tried my best and next year will be sure to bring some proper makeup sponges (instead of just using the random foam sponges we had access to) and brushes.

Still, it was a fun time and the 300 or so children seemed to really enjoy themselves. It is neat that there are so many people who come together to create these sort of opportunities for children.

While in Kansas City, the IT department decided the best solution to my laptop’s performance issues was to replace it with a new model. When I returned home, I discovered that the laptop’s size would require me to make my first visit to an obscure woodworking district that lies along the railroad tracks near the entrance to the Chalerm Mahanakorn Toll Road. 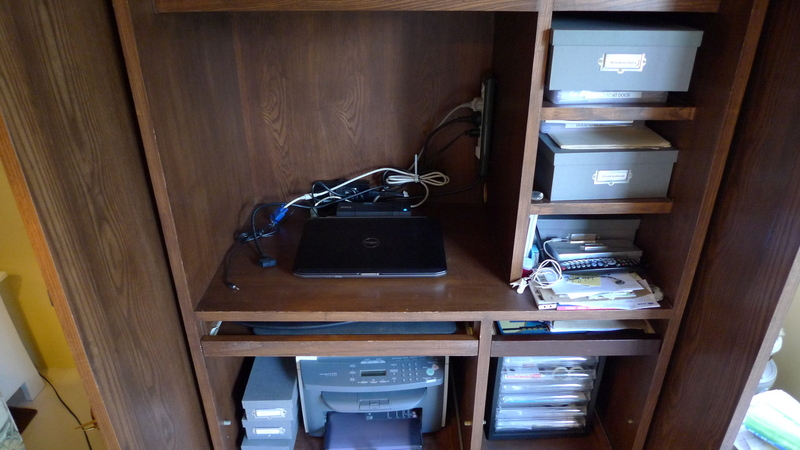 The new laptop in its place in my office armoire. The laptop is about three-quarters of an inch wider than the previous one, although thankfully they are both made by Dell and use the same docking station. (A docking station, if you aren’t familiar with it, is a device that allows your laptop to function as a desktop computer. You can turn it on while it is closed, attaching it to an external monitor, laptop, and mouse. Very helpful for those of us who really aren’t traveling anywhere with our laptops and would like a large monitor.) Since this laptop was wider than the previous one, the wooden shelf I had used as a monitor stand would no longer fit. 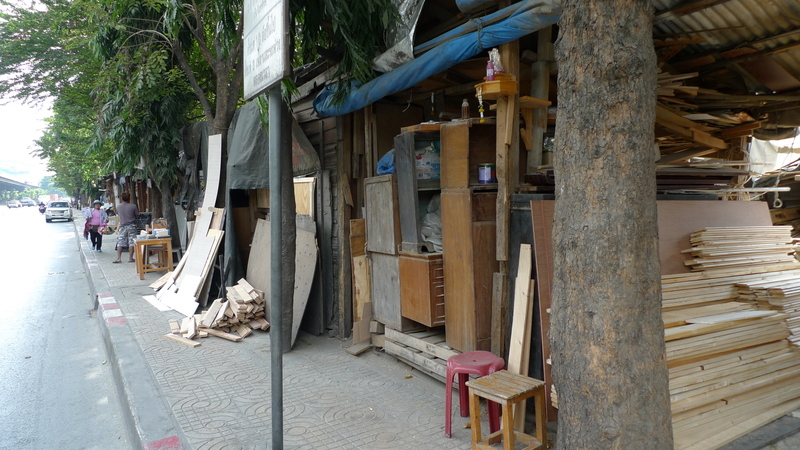 Alongside a dusty road near the entrances to the Khlong Toei Port and the toll road, is a row of woodworking shops. This ragged bunch of shops looks more like a shanty town than a business district, but these businesses can fashion most anything from wood. The shops closest to the port focus on making shipping pallets. Further down are shops with photo albums showing the wares from bookcases to bedposts that they have made. 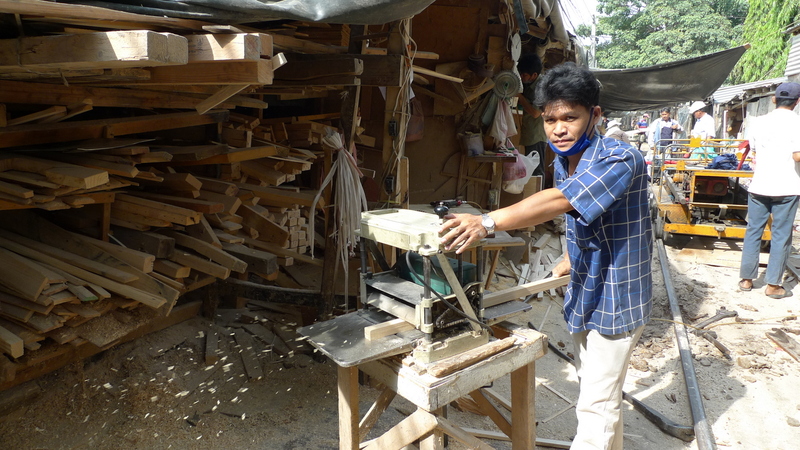 Not sure which shop would be the best one, we walked for a bit until finding someone who looked welcoming rather than wary. We showed him the sketch I had drawn, explained what we were looking for, and he went off to find some sample pieces of wood to see if the quality would be sufficient. After settling on the wood, he started cutting and rough sanding. I noticed a lack of safety equipment being used by any of the workers. I also noticed that our fellow was missing part of one finger. 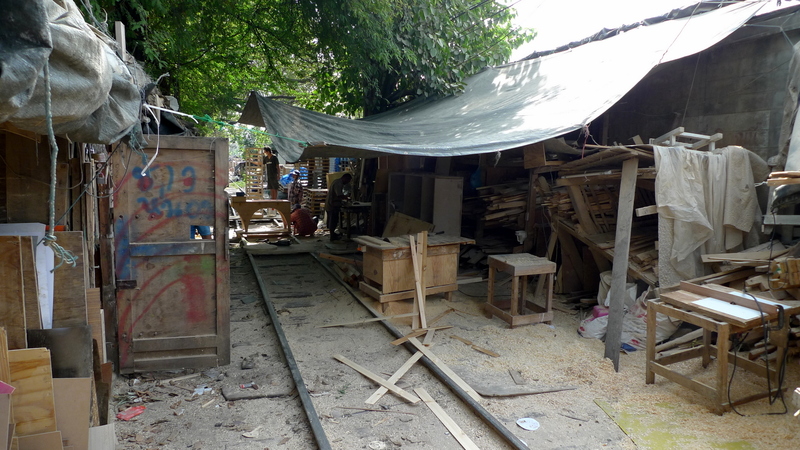 Looking down the inside area of the shops, it is unclear where one ends and the next begins. Perhaps it is all really just one big shop with different fronts? The railroad tracks running down the middle of the shops were no longer shiny silver on top, so I concluded that the tracks are not frequently used. That said, some repairmen with a rail repair cart appeared to be fixing the rails, so maybe they are still in service. 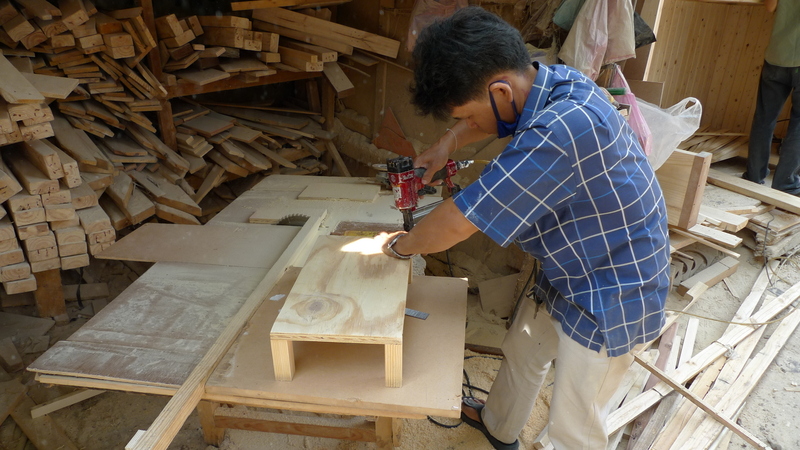 After about ten minutes and a couple of careful measurements (he ascribed to the “measure twice, cut once” philosophy – a good sign), the woodworker glued and nailed the legs onto the monitor stand and checked that it was level. We turned down an offer to stain it – I can do that in the future, if I so desire – and headed home. The price for materials and labor? 400 baht – about $13.50. 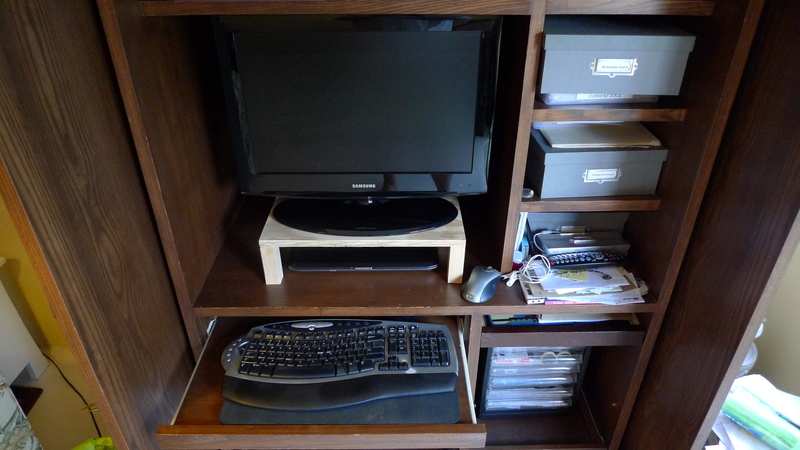 The finished product, the monitor on the (admittedly not the most handsome) monitor stand with the laptop underneath, and a remote keyboard. Not only is the end product completely satisfactory, but I enjoyed finally having a chance to see what was going on at the woodworking community next to the tollway entrance. 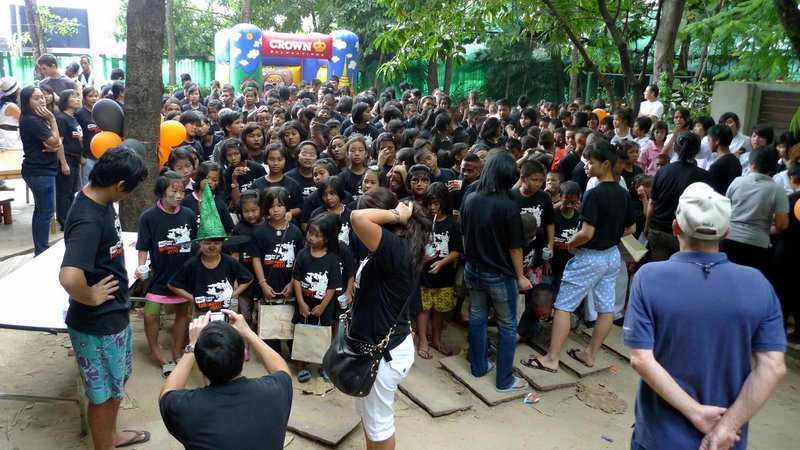 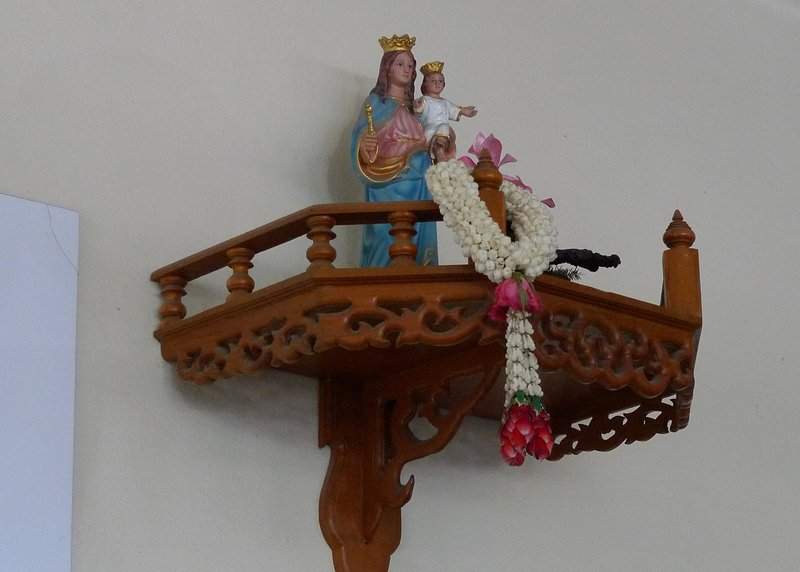 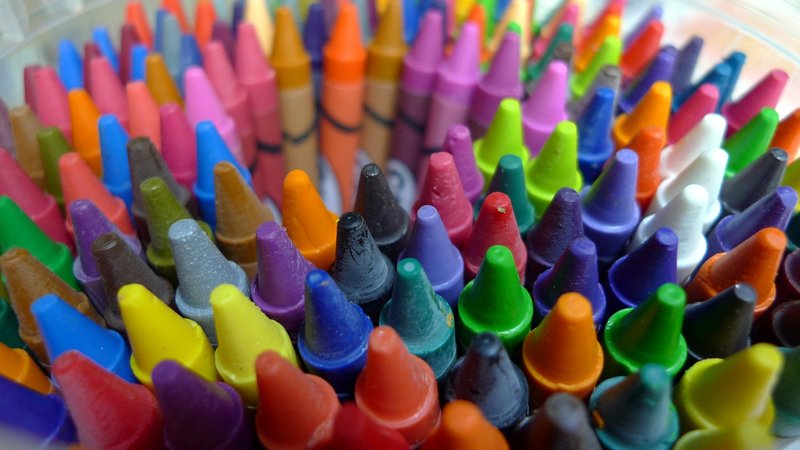 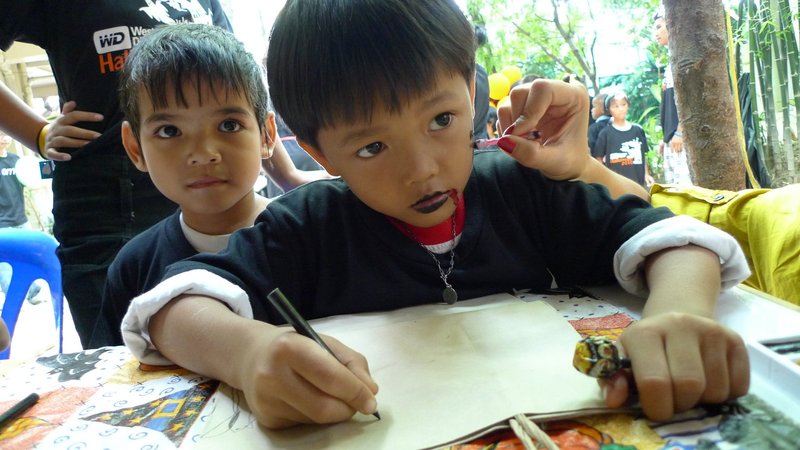 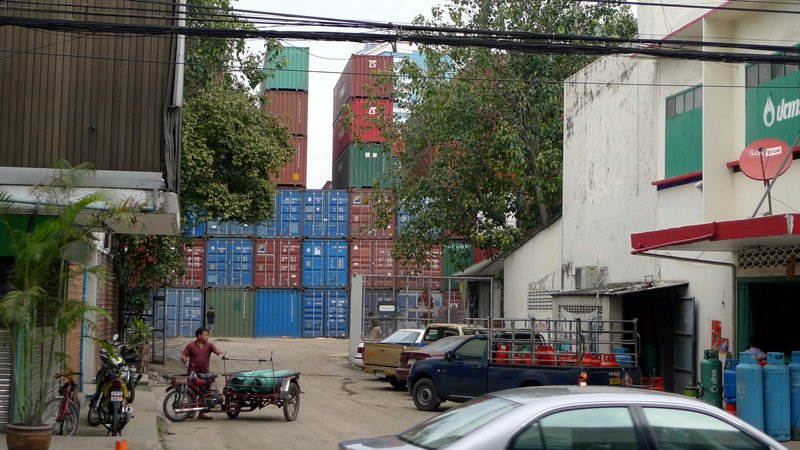 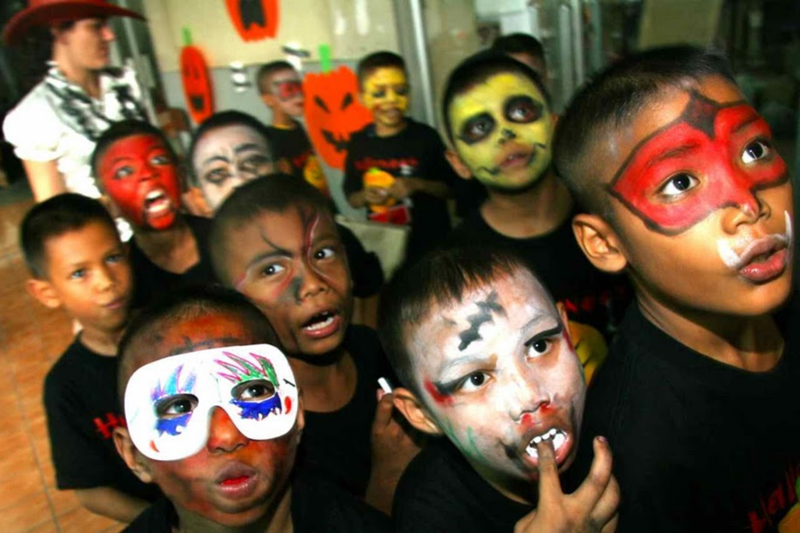 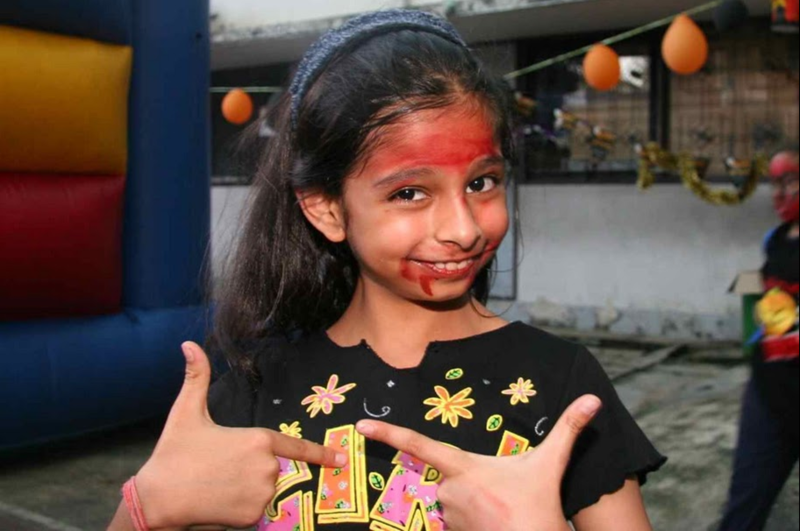 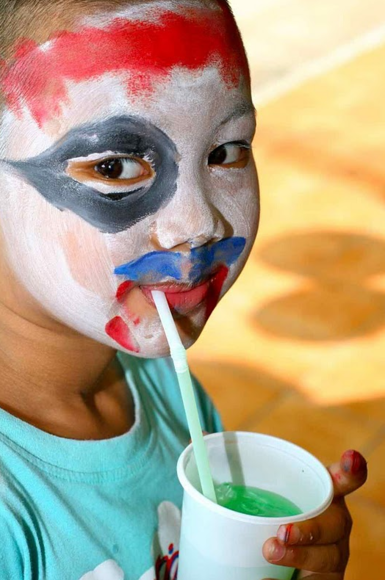