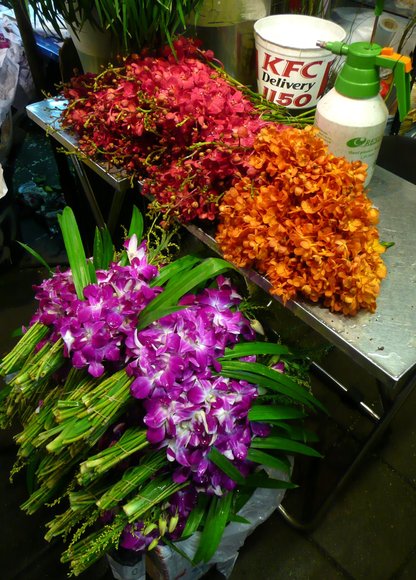 If you had asked me on Wednesday or Thursday, I would have told you that I was finally over my jet lag.  My sleeping hours were back to normal, I didn’t need an unusually long afternoon siesta, and my appetite had returned.

But then somewhere in the past thirty-six hours or so, I’ve managed to re-introduce jet lag into my life.

It started Friday night, when I had hour-long conference calls with the United States scheduled for 10:00 pm, 1:00 am and 3:00 am.  I should say, I had the calls scheduled for me, as I wouldn’t have voluntarily scheduled such late calls on a Friday night.

The first one I stayed up for, trying to spend a low-key hour or two before the call so I was still alert.  Then I went to sleep at 11:00 for about ninety minutes, waking up in time for the 1:00 call.  Second call went well but by this point I was dragging.  Finally, about 2:20 I chatted with my manager on MSN messenger and, upon hearing that I was planning on staying up for another call, insisted that it would be recorded and I could review it later.

So I finally went to sleep at about 2:40 Saturday morning.

Of course, I woke up by 8:00 because I’m just not made for sleeping in.  Something about the muted glow of sunlight from the curtains just turns on my internal clock.  Saturday was chock full of errands including a trip to the stone store to buy new marble tiles for the bathroom shower, which has to be redone.  (More on that in the future.)

The jet lag would have worked itself out had it been a single night, but Tehlin – a university classmate – her husband Chris and their two children were scheduled to arrive from Hong Kong at midnight Saturday.  Of course I wanted to be there to pick them up.  Arriving in a strange city late at night is tough, especially when you have two young children with you.

Because of the category nine typhoon in Hong Kong, their flight was delayed.  The first delay was to a 2:00 am arrival and the second was to 4:00.  Tehlin messaged me each time to keep me informed.  Between the messages, I slept in fits and spurts from 11:00 until 3:00.

Tawn was a good sport and accompanied me to the airport.  The good news about 4:00 am arrivals is that there isn’t any line at immigration!  Tehlin and Chris were out very shortly after landing, their two very sleepy children in tow.  By the time we arrived at their hotel along the river, it was 5:00. 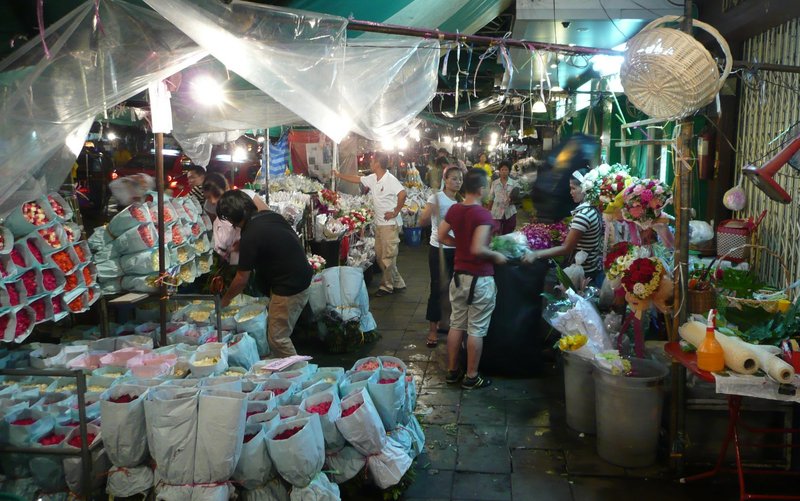 Since we were up and since we were in the heart of the old city, Tawn suggested we go to the flower market.  This is the wholesale district for flowers, which are abundant and relatively inexpensive.  The market stretches for about five blocks, trickles off down side streets and is interspersed with some fresh vegetable markets.  (Never sure where they put the edible blossoms: flower market or vegetable market.)

We browsed several blocks before finding three large bunches of flowers including some orchids, some carnations, and something I’ve never seen before.  Tawn doesn’t even know their name in Thai.  We just call them “pretty”.  The total cost was less than US$15 for all the flowers.

Some pictures.  Below, Tawn waits for his first bunch of flowers to be wrapped.  This is in the section of the market with stores that sell arrangements to hotels, embassies and the like. 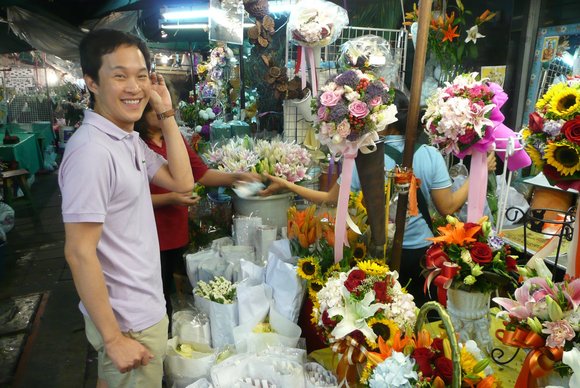 Below, an elderly lady makes garlands, used at temples and spirit houses throughout the city to pay respects to whichever local deity, teacher, or other respected figure you choose to honor.  One whole section of the market has stall after stall of these yellow flowers, which I think are marigolds.  (Maybe?  Tawn says they are an Indian flower but doesn’t know their English name.  Dok dao duang in Thai, literally “shining star”.) 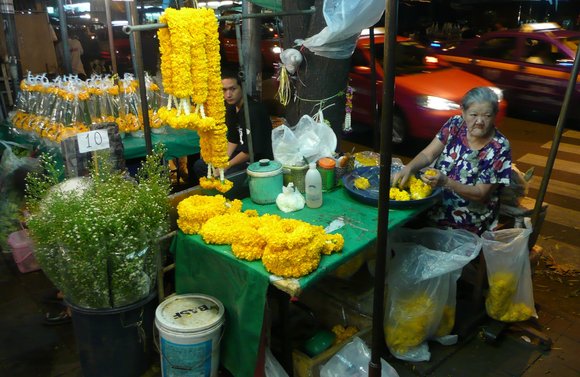 One of the ladies selling orchids just piles her flowers on tables, halfway burying a telephone line junction box.  If your phone doesn’t work in this district, it may be due to moisture from the flowers.  Bunches of these purple orchids are about US$1 each. 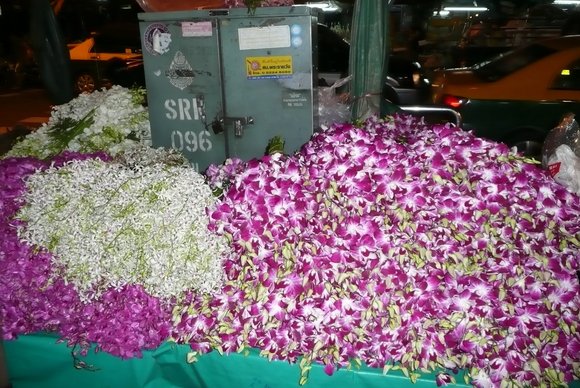 It was getting close to six and we decided to get something in our stomachs before returning home.  You’d be amazed the number of small restaurants and street vendors who are selling food at this hour, but when you look at the number of people who work throughout the night here in the City of Angels, maybe you wouldn’t be so surprised after all. 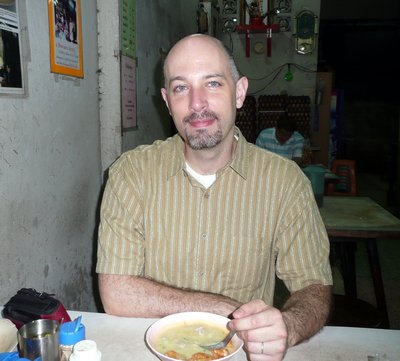 Adjacent to Sam Yan Market, near Chulalongkorn University on Phayathai Road just around the corner from Rama IV Road, is a forty year-old institution that serves just one thing: jok.

Also known as congee, jok (pronounced “joke”) is rice that is boiled in stock until it is thick and creamy.  Some farang compare it distastefully with oatmeal, but I like oatmeal so it is no surprise that I find jok to be something of a comfort food.

Jok Sam Yan, as the restaurant is known, is popular with taxi drivers, university students, police officers, and all the other types who keep odd hours.

The open air restaurant was full and we ordered two bowls of jok muu sai kai – jok with pork and egg.  The secret to their jok is the pork, which is marinated in sweet soy sauce and mixed with ground toasted rice.  It is so good that you can buy it in bulk by the kilogram to take home and use in your own soups, stir fries, and dishes of spaghetti and meatballs. 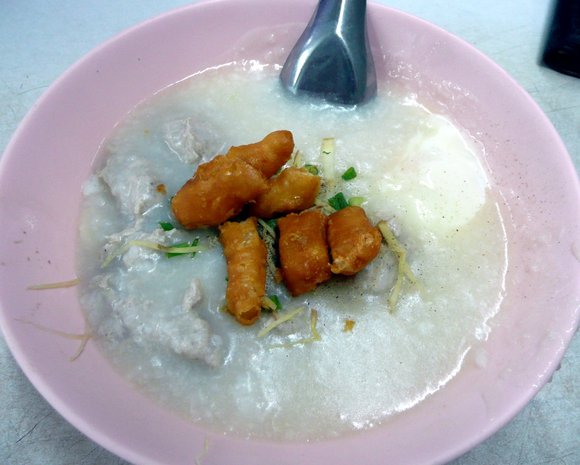 Garnished with some fresh spring onion, shreds of ginger and – if you want – fried Chinese croutons, the jok is filling, warm, soothing and very tasty.  A great way to end the night or start the morning, depending on how you are living your life.

In my case, I was a bit unsure which I was doing.

So I managed to get an entry featured on Xanga’s front page.  After watching Kari, Zakiah, Steve and Sandelion’s front page fame, I was enjoying life in obscurity.  It is really weird to be receiving “friend” requests from totally unknown people.  I’ll visit their sites first just to see what they write about and a bit about who they are.

It is also funny because I notice that of the several thousand people who have read that one entry, very few took the time to look at any of the adjacent entries.  When you read a featured entry, do you ever ready anything else the author writes?  Maybe I’m just strange that way, but if the entry is any good at all, I read other entries on the author’s blog because I’m curious if that entry is representative of the type of things he or she normally writes.

Anyhow, welcome to those of you who are new readers and thanks to the longer term readers for recommending the entry in the first place.

There is a Chiang Mai based coffee chain called Wawee Coffee.  It is a small chain, locally owned and it serves really tasty coffee, much better and a bit more reasonably priced than the big green mermaid.  Their shops are also really beautiful.

They just opened their first Khrungthep branch near the Ari BTS station, literally a sixty-second walk from the station exit, in a beautifully restored 1950s-era house. 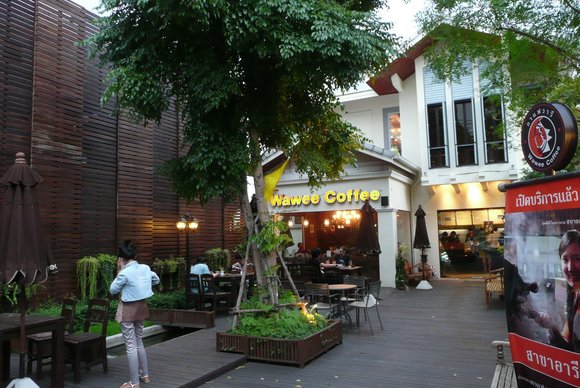 This is going to be my new place to bring my laptop and work.  Isn’t it cute?

Progress was made on using up the rest of the chicken stock.  With two extra zucchini hanging around from the risotto, I decided to make zucchini and potato soup for lunch. 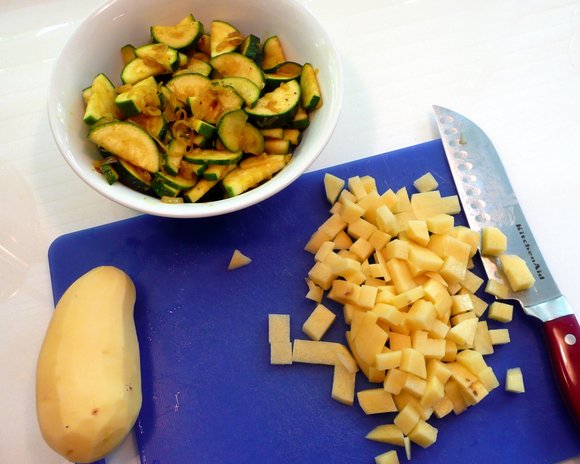 First I cooked the sliced zucchini in a pan with onions, shallots and garlic.  Spices included tumeric, curry powder, cardamom and cumin, lending a bit of an Indian flavor. 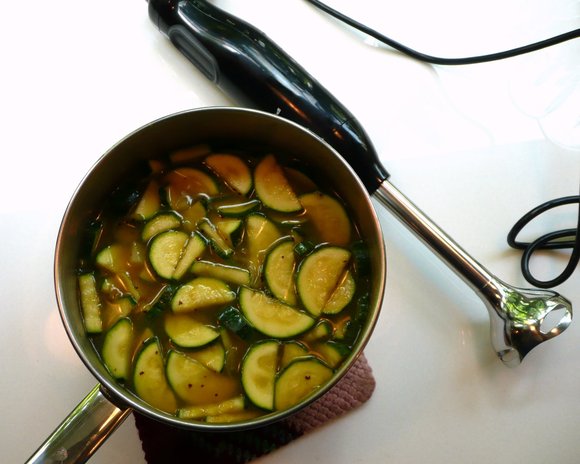 Then I boiled the diced potatoes in the chicken stock until tender.  I added the zucchini and heated them through, then brought out the Kitchen Aid immersion blender and made quick work of the soup.  Two minutes later, I had a smooth soup.  I added about a half-cup of buttermilk to give it a tangy edge and a little bit of creamy richness and then corrected for the flavor. 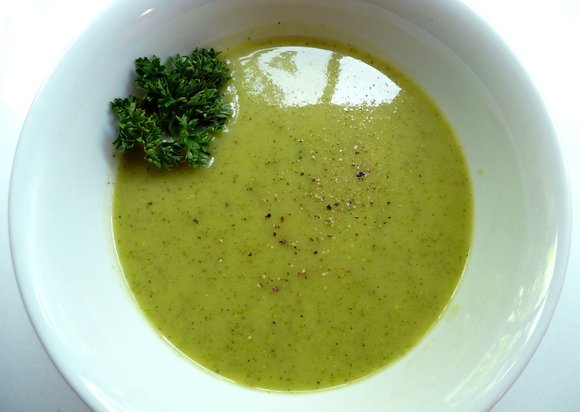 Let me just tell you, I love my immersion blender.  What a quick and easy way to make a healthful meal.

Okay, just received the word from Tehlin that they are up.  It is about 11:30 am Sunday morning, so they were able to get five hours or so of sleep.  I’ll go get them in a bit and we’ll see some palaces and temples.