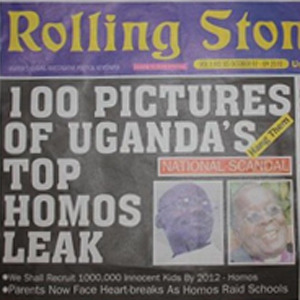 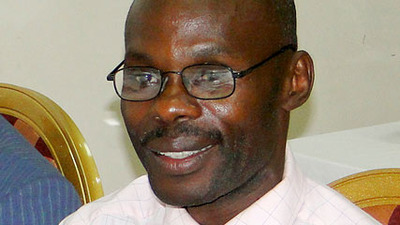 Thanks for your patience as Tawn and I went through a weekend’s worth of wedding celebrations and then tried to sort through pictures in order to share them, and the associated stories, with you.  We were fortunate to have several guests with cameras and had the opportunity to gather the pictures before the weekend ended.  Another friend, Ryan, shot with a digital SLR and hopefully we’ll have some even nicer pictures to share with you in a few weeks.

Thanks also to the dozens of congratulatory comments and well-wishes.  More than ever, this trip in which we’ve met several Xangans, has reinforced what a community this site really is.  We appreciate all your thoughts and greetings.

On Thursday morning we headed north to Council Bluffs, Iowa, about three hours from Kansas City.  While my sister, brother-in-law and the nieces went to the zoo, Tawn and I took a nap then picked up guests from the airport.

Along the way, we had a rather blogable moment as my brother-in-law borrowed the keys for the sedan in order to remove something from the trunk.  He then kept the keys in his pocket as they headed off to the zoo, something I didn’t discover until thirty minutes before Lilian and Anita’s flight was scheduled to arrive.

We ended up taking a taxi across the river to the airport, what ended up being a $50 round trip!  Thankfully, though, Lilian and Anita were easily found at the baggage claim and the timing worked well. 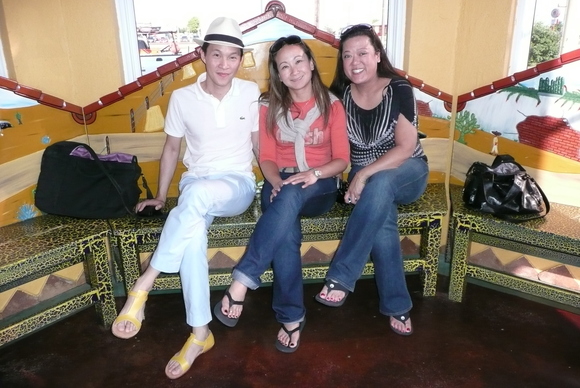 Above: Tawn, Anita and Lilian at La Mesa Restaurant.

After dinner at a Mexican restaurant (I realize I’m repeating a bit of a previous entry, so my apologies), we headed to the Cass County (Nebraska) Fair to enjoy the rides on the midway, a taste of cotton candy, and the roar of the crowd at the tractor pull.

Top: Tawn, Lilian and Anita in the grandstands at the tractor pull.  Middle left: The same trio buying some cotton candy.  Middle right: A single passenger spins round and round as the sun dips below the western horizon.  Bottom: Tawn, Chris, Sugi and Andy. 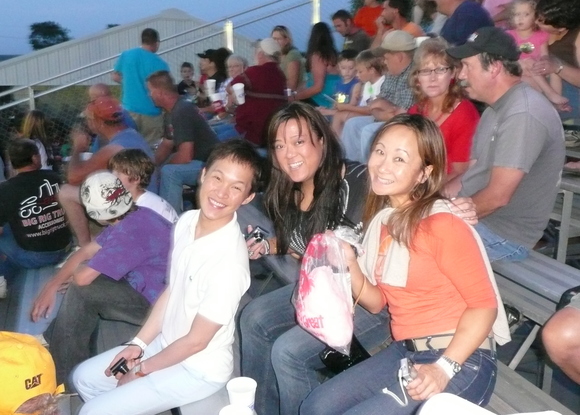 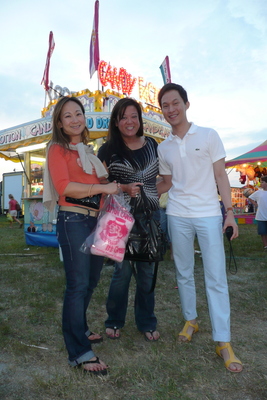 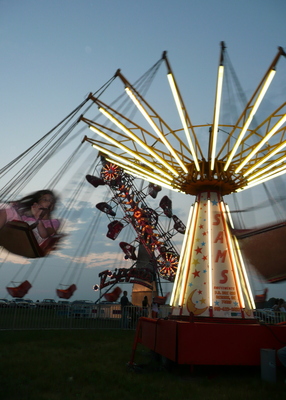 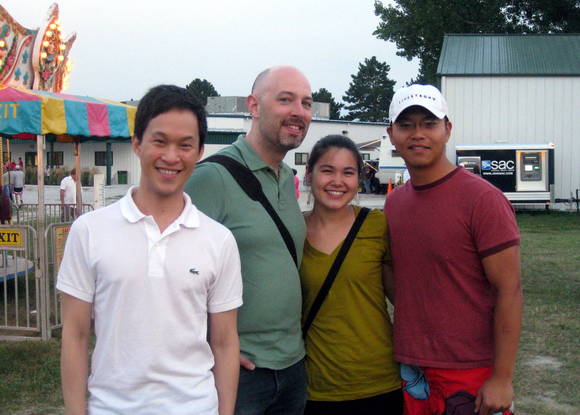 Driving home along the country roads, Lilian and Tawn dozed as Anita chatted with me to help keep my eyes open.  After dropping them off at the hotel, I headed back out to the Omaha airport as Ryan’s flight arrived at 11:30.  After stopping by a local diner so he could order dinner (six hours on Southwest with only peanuts – but that is to be expected), I called it a night.

Bight and early on Friday morning, we were showered and dressed and ready for breakfast.  The obvious choice: the Cracker Barrel.  Below, Anita and Tawn wait for their grits. 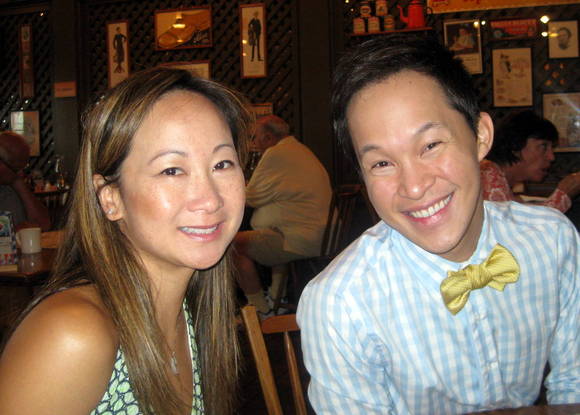 We arrived at the courthouse at 10:30 and went to the County Recorder’s office to pick up the license.  The clerk, who had been grumpy on Tuesday morning when we first applied, seemed a little less so this morning.  Maybe she’s more of a Friday person?  In either case, we reviewed the document, signed it to attest to the accuracy, and then headed upstairs to the Court Clerk’s office. 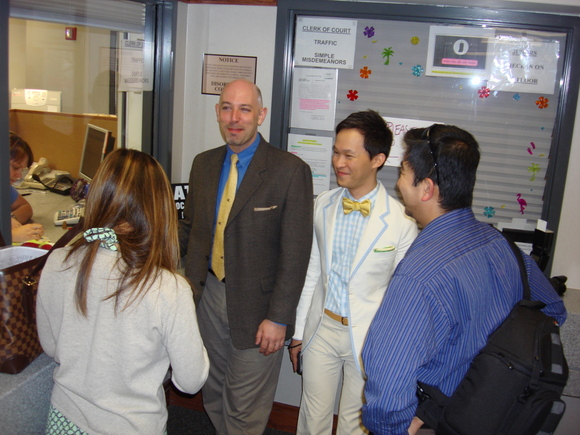 Above, waiting at the Court Clerk’s window with our witnesses, Anita and Ryan.

Thankfully, there weren’t any cases in session so the waiting area outside the courtrooms weren’t filled with the scraggly assortment of people who were there Tuesday morning.  Still, there were a few people around, looking on with curiosity as the dozen or so friends and family members filled the room.

Below, pre-wedding picture with my family members who had made the trip.  Note the bemused lawyer getting into the elevator in the background! 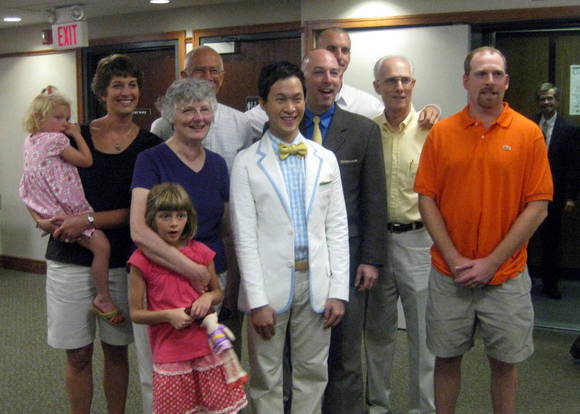 This whole bureaucratic process reinforced for me that marriage is, more than anything, a civil function: a legal recognition by the state of the relationship between two adults.  I believe more than ever that all “marriages” should be identified by the state only as “civil unions” and that the churches should be allowed to do whatever additional ceremonies they see fit.  Separation of church and state.  Anyhow, let’s not get into the political aspect of this issue here.

While we were taking pictures, the judge came out of his courtroom and called us in.  He was very friendly and invited people to walk in front of the bar if they wanted to take pictures from the area in front of the bench.  Oddly, though, everyone respected the institution and stayed in the viewing gallery.

We asked the judge whether we could use our vows from the commitment ceremony we did in 2004 as part of the wedding.  He reviewed them and decided they complied with whatever requirements for wedding vows that the state of Iowa has, so agreed to use them instead. 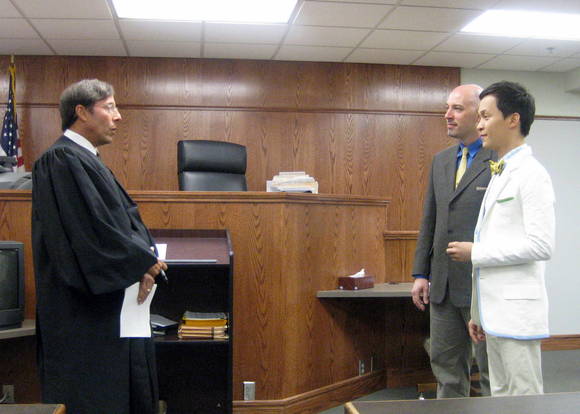 Here they are:  (Video of us saying our vows here)

(Chris/Tawn), I choose you to spend my life with,
to grow with, and to make my life with.
I will honor and respect you and be by your side
as we build a life together.

You are the love of my life.
Through the challenges and joys,
the brightest peaks and darkest valleys,
the sunny days and stormy nights,
I pledge my love to you
until the last day of my life.

We then exchanged rings and continued:

(Chris/Tawn), I give you this ring as a symbol
of my love, joy and fidelity.
Wear it as a reminder of my vows to you
and your vows to me.

With that, five minutes after we started, the judge pronounced us legally married.

It is worth noting that during the ceremony, I had a view over Tawn’s shoulder of the window in the courtroom door.  I noticed two faces in it during the proceedings:  One was that of a redheaded teenage boy wearing a baseball cap, who had a confused and slightly disgusted look on his face.  The other was of the grumpy clerk from the County Recorder, whose face was beaming with a wide smile.

After the witnesses signed the license and the judge congratulated us, we headed downstairs to the adjacent park for some pictures.  Council Bluffs, a town that is perhaps a bit lost in the shadows of its larger neighbor, Omaha, still has a cute historic center and they have done a very nice job on the remodel of the park. 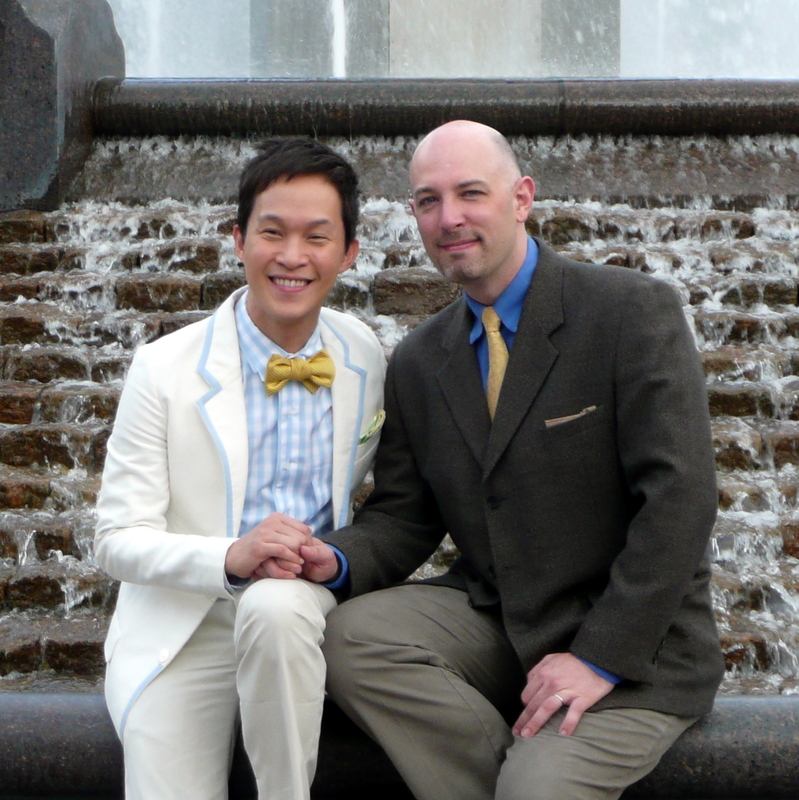 Above, Tawn and I pose in front of the fountain.  Below, posing with my parents, who drove in the previous day from Indiana. 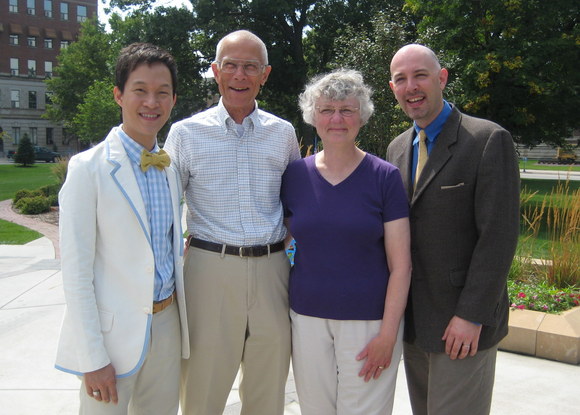 After pictures, we drove to a local barbeque restaurant (C’mon, this is a midwestern wedding.  What did you expect us to eat after an important family event?) for lunch.  No pictures there as once you get your fingers wet with barbeque sauce, you don’t want to be handling your camera!

Filled up with good food and flushed with the excitement of finally being legally recognized as a couple, we loaded back into the car and headed back to Kansas City.

Reception covered in the next entry.  Once again, thanks for your good wishes.  I’m glad to be able to share this special event with you.