Next to the Asoke Skytrain station, on the north side, sits an empty lot that was the Ford and Mazda dealership until some time last year.  The dealership moved and the buildings were torn down and for the entire rainy season, most of the property became a swamp.  In the southwest corner of the lot, where Sukhumvit Soi 19 connects with the main street, there is a row of four-story shop houses that contained among other things a nice Indian vegetarian restaurant.

It looks like construction on whatever is going to be built there, is going to start soon.  They shop houses are being demolished this week, an interesting process of literally deconstructing, or un-building, them.

Below: From the platform of the Skytrain station, looking towards Sukhumvit Soi 19, you can see workers have already dismantled the top two stories of the building and are now working on the floor between the second and third story. 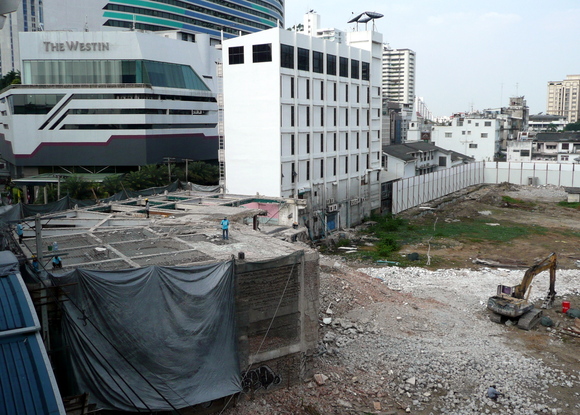 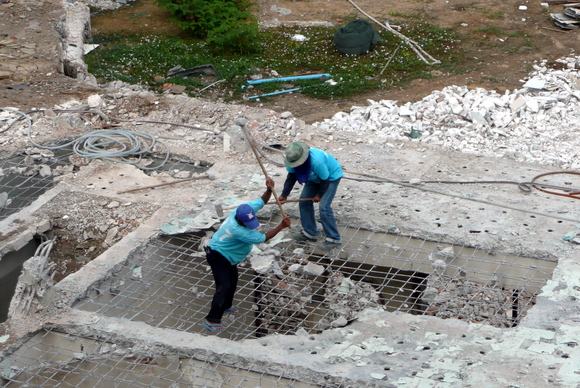 Above: Workers use sledgehammers (one worker has only flip-flops on to protect his feet) to break away the concrete, which falls through the re-bar to the floor below.  Notice that they have to balance on the re-bar.

Below: Another worker then uses a welding torch to cut (or at least, weaken) the re-bar so it can be cut into smaller pieces that workers then manually carry out.  I’m curious why he’s not at risk of the re-bar just giving way under him as he cuts.  In the picture below you can see the concrete pieces that have fallen through. 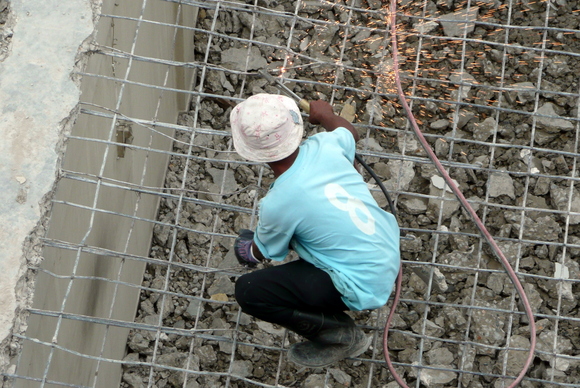 In other rooms, workers are clearing the concrete and re-bar and a small Caterpillar with a jack hammer is breaking away the interior walls between the load-bearing columns. 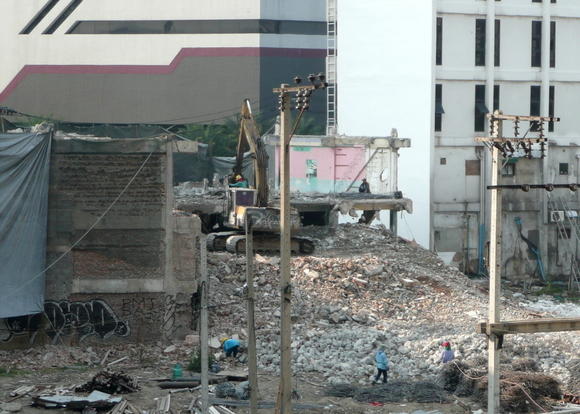 Above: A few days later I passed by again and saw that they were now close enough to the ground that they could tear down the structure using this back hoe.

I’m curious to see what will be built here.  It is a very large property so a complex of several towers could easily be built.  Good place for another mall, right next to the Skytrain station and the Metro subway at the corner of Asoke and Sukhumvit.  Because that’s just what we need – another mall!

Below: Just to the other side of Asoke, on the northeast corner of Sukhumvit, is the under construction Interchange 21 building.  Here’s an update photo of the construction progress from this week: 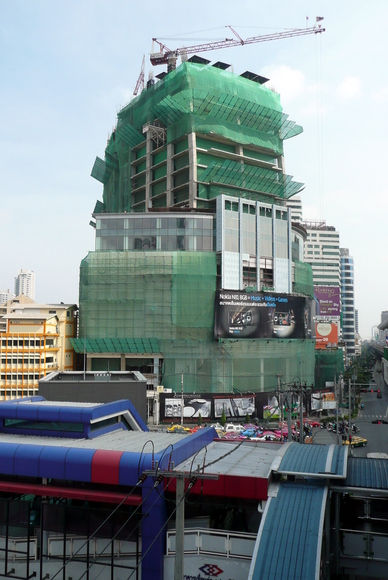 As you can see, there is just lots of fun civil engineering stuff going on here in the City of Angels.  There is also a elevated walkway being built that will connect the Skytrain station directly to Interchange 21 and, I would assume, to the Exchange Tower that is on the southeast corner of Asoke and Sukhumvit. 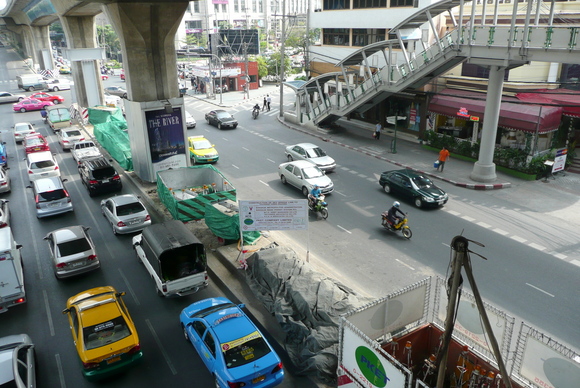 Above: In this photo taken from the Skytrain station ticketing platform looking generally east along Sukhumvit towards Asoke, Exchange Tower is visible in the upper center with some just-visible True Fitness purple signs over the ground floor windows.  The elevated walkway will sit underneath the track viaduct and there will be a long span across the Asoke-Sukhumvit intersection.  You can see work progressing on the foundations for the support columns.

In this picture, you can see the Honda Jazz starting to turn right into the Asoke-Sukhumvit intersection.  The steel structure that will span the intersection will connect to the structure you see in place here.  Construction workers will hoist the steel span into place from 1-5 am on December 9th.  I’m thinking about getting up early (or staying up late) to go down and watch that and take some pictures. 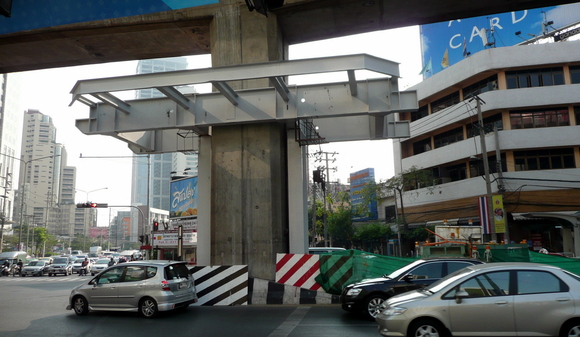 In the final bit of engineering updates for today, there is a project going on along Asoke Road, which is prone to flooding, to raise the sidewalks by several inches (and centimeters, too).

The construction process involves jack hammering the existing curbs (all done at night – here is a photo of the workers the night they were working just outside our building… all night long), building new curbs, removing the paving stones and raising up the ground level, then pouring a cement sheet and laying new paving stones. 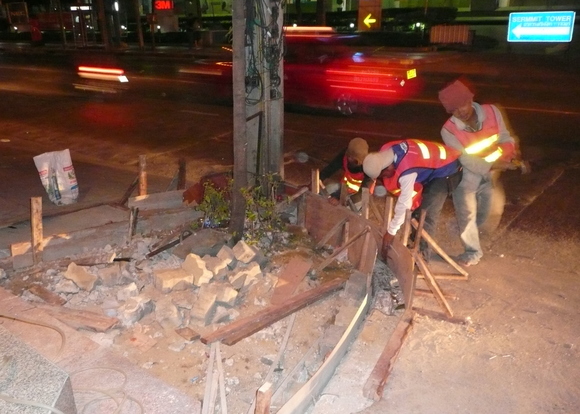 As of yesterday, much of the block we live on looks like the photo below.  We have noticeably higher curbs but nothing has been filled in yet.  Notice also that the covers to the sewers have been raised and new steel and concrete doors have been poured.  The doors have a space for pavers to be added to them, too, so they match the rest of the sidewalk. 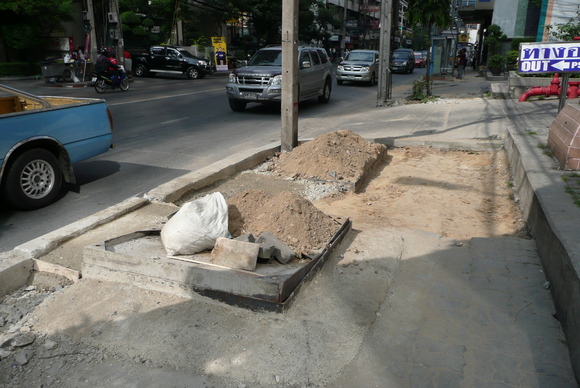 Hopefully this project will be wrapped up soon as it is a pain to walk on the sidewalk and dangerous to walk in the street.  And that’s this week’s civil engineering report.  Back to you in the studio.