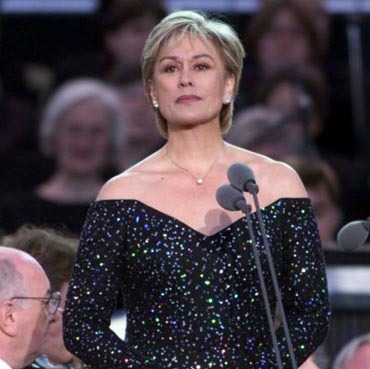 Monday night Tawn and I went with Ken, Brian and Sean to watch famed soprano Dame Kiri Te Kanawa perform at the Thailand Cultural Centre.  This was billed as her “farewell tour recital” which I can’t decide whether it means that this is a recital in preparation for the tour or perhaps just the tour itself.

I’ve never seen Dame Kiri perform before but was captivated by her incredible voice.  It was a simple recital: Dame Kiri and her pianist, center stage.  She peformed six sets of songs and two encores, starting with German operas, moving through French, doing a few more contemporary songs such as “Scarborough Fair”, and then moving to the Italian operas.

Dame Kiri’s voice, and her control of it, is amazing.  Unamplified, the audience was leaning forward breathlessly to catch each and every subtle rise and fall of her voice.  It was just a lovely experience. 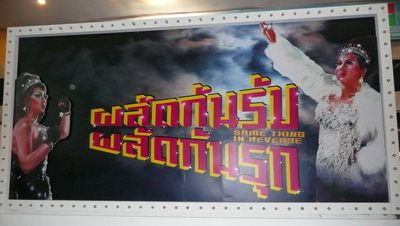 That was our experience this week with a fabulous and real (by birth) woman.  Sunday night we spent some time in the world of fabulous not-so-real woman, although in all fairness some of them are in the process of becoming women.  The event: Miss AC/DC 2007!  This year’s tag line: Same Thing in Reverse.  The Thai version was a bit racier, translating as “Taking Turns Receiving and Giving”.

In its seventh year, Miss AC/DC has its roots deep in a strong subculture within the gay Thai community: transgendered and, particularly, transsexual people.  Best described as the Miss Universe pageant with fake breasts and estrogen, it is a much better reflection of the gay community in Bangkok than the November pride week.  Pride week is a feeble collection of events sponsored by the mostly farang owners of the bars and other businesses in the Silom gay ghetto.

Miss AC/DC on the other hand, was organized, supported, and attended by locals, many of whom probably don’t show their faces on Silom at all.  It felt so much more like a representative picture of the community and, as such, was great fun.  Nonetheless, there seems to be a bit of a divide within the event:

There are the transsexual participants, people who were born men but identify as women, many of whom are taking steps towards gender reassignment surgery.  For example, a number of contestants had had breast implant surgery and filled out their evening gowns au natural.

Then there are the drag queens, people who are dressing as women for the fun of the event, but who maintain their identity as men on a daily basis.  The choice of Miss AC/DC 2006 apparently caused some controversy precisely because she wasn’t woman enough, whereas many of the other previous winners seemed to put their inner woman on the outside.

Anyhow, that aside, it was an evening filled with a lot of talent, creativity, and fun.  Here are the pictures and the stories that go with them.  Click on pictures to see larger versions.

Each audience member receives a ballot – I’m not sure how or what our votes count for, because there was a panel of some twenty judges.  Before the show the contestants are mingling with guests in the foyer of the BEC Tero Hall (a large concert/event hall at Suan Lumpini Night Bazaar) showing off their costumes and posing for pictures.  Here is Tawn with some of the contestants.  Clockwise from upper left: Miss Canada (the only farang contestant), Miss Greece, Miss Zimbabwe, and the recipient of our votes, Miss Vietnam. 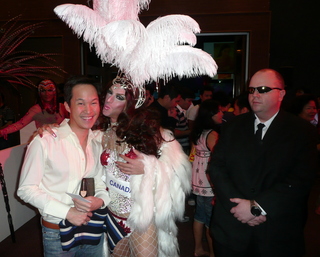 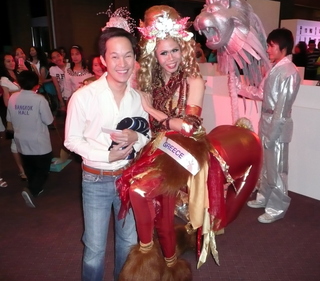 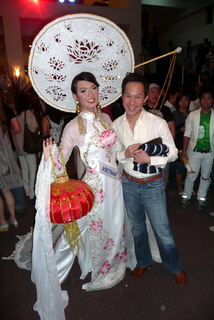 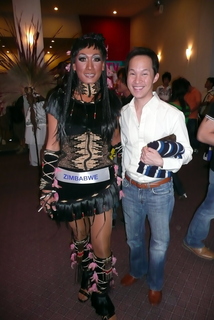 Also posted in the foyer were the profiles of the contestants, most of which had “before and after” pictures showing them in their everyday and as a woman looks.  There were some eighty contestants, but here is a sampling, most of whom I think participated as drag queens rather than transsexuals: 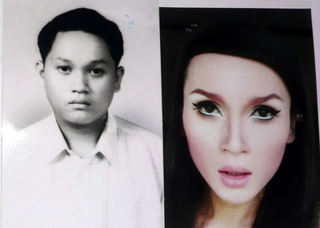 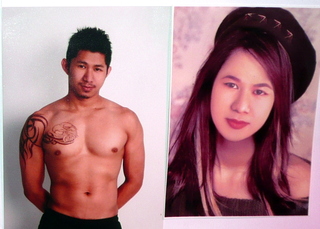 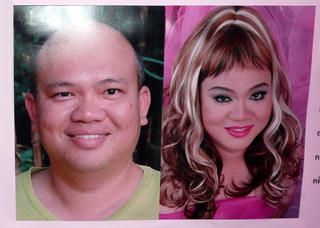 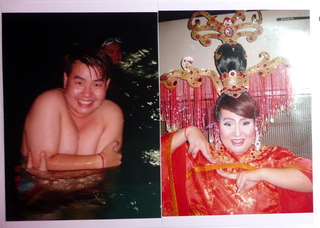 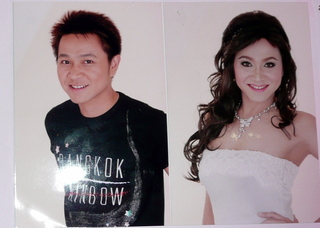 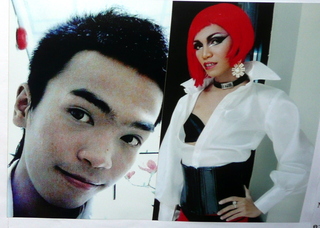 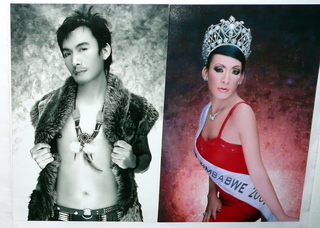 This was a professional production, held in a large hall with all of the trappings of any major pageant.  Filming was being done for the DVD (last year’s was on sale in the lobby) and the event was projected onto screens throughout the hall so people sitting further back could see every detail. 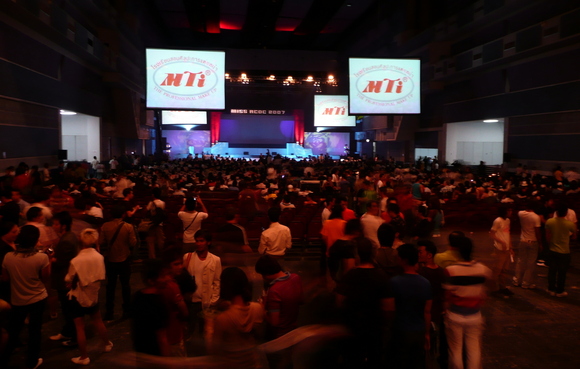 Thanks to Suchai, whose group of friends is very closely involved with the Miss AC/DC organization, we scored front row tickets across from the press section.  Note where Tawn is sitting in the picture below. 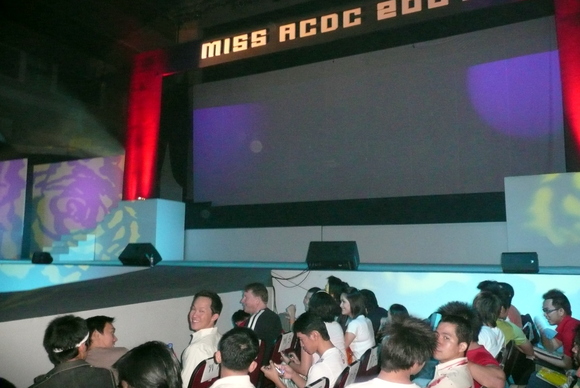 The opening piece, a full on Broadway style musical number with hired dancers (these are not the contestants performing) was a political satire using an old patriotic song, performers dressed as female military members a la the Women’s Auxiliary Corps of World War II, ending with the soldiers holding up the constitution – a very clever commentary on the coup and other recent political events, below. 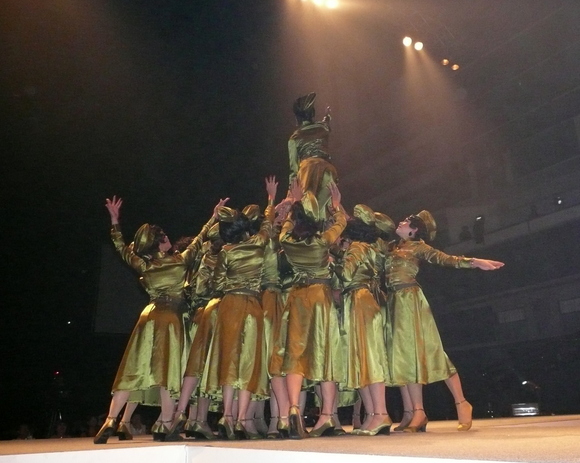 Then the evening’s contestants paraded onstage in their fanciful and creative costumes: 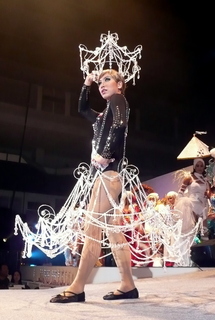 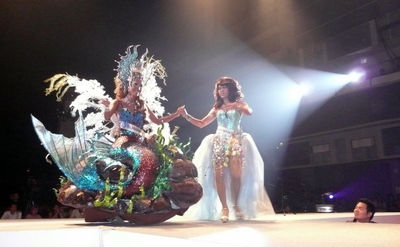 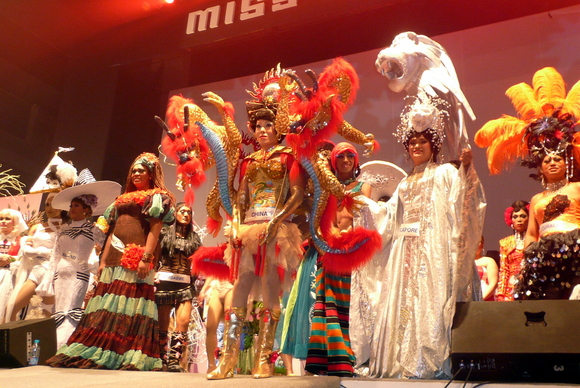 Below: In the center of the picture, Miss Netherlands (tulip dress with windmill) and Miss Burma. 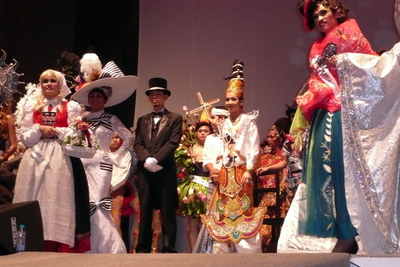 The best costume award was won by Miss Russia, who came out as a series of matrioshka nesting dolls in an arrangement of fishing wire and two assistants that was brilliantly clever.  How much money and how many hours were spent on these ideas? Also quite well done was Miss Laos, whose puffy plaid dress flipped down in the midst of her runway walk to reveal and elegant canary yellow number. The second phase of the event was an evening gown contest, which gave the contestants an excuse to wear yet another fantastic outfit.  Here is a sample of the types of dresses we saw, some of which were truly beautiful and, on some of the contestants, very elegant. The number of participants was whittled to a final ten who then performed in the talent portion of the pageant.  Miss Vietnam rode her unicycle, Miss Czech Republic did a gymnastics routine, and Miss Jamaica sang with a resonant and powerful voice.

As the judges’ votes were tallied, Miss AC/DC 2006 (who had been Miss USA) performed a cheerleading routine with what must be an organized cheer squad.  They were very good and other than being gay and Thai, would have fit in at almost any college football game in the United States. Finally, some five and a half hours after it started, the final five contestants were lined up on stage and the runner-up awards were given.  Our choice, Miss Vietnam, came in second to this year’s Miss AC/DC, Miss Jamaica! It was a long evening and a lot of fun.  Who knows if we’ll have the energy to do the whole thing again next year, but it was one of the most interesting glimpses into gay Thai culture that I’ve seen so far.  In fact, Ken, Tawn and I were discussing what a fascinating documentary could be made about the pageant and the lives of the various participants.  Who is there for which reasons, whose family members know (and support) them in this event, what about the trans vs. drag debate, etc…