While in Seattle, I spent a few days with my friend Jack. He’s a fellow aviation enthusiast so we made the requisite “pilgrimage” to two Seattle-area aviation hotspots: the Boeing widebody factory in Everett and the Museum of Flight at the original Boeing site at King County Airport. 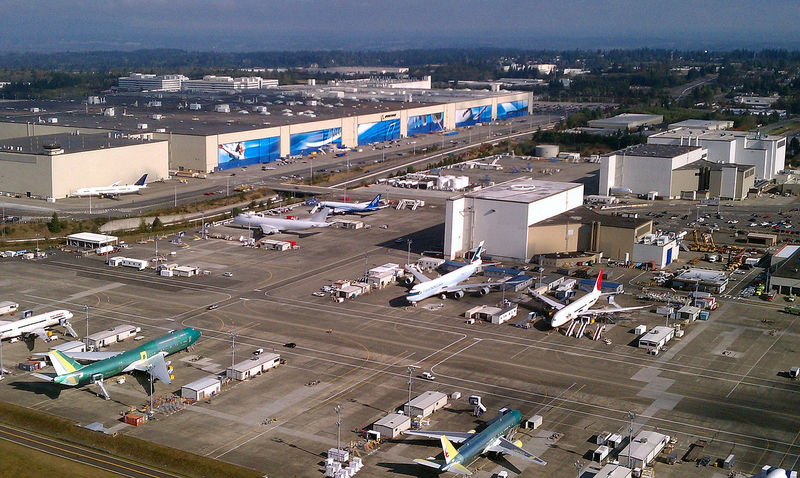 The city of Everett lies about 35 miles north of Seattle. Since the late 1960s, Boeing has produced and delivered well over 3,000 widebody aircraft from this factory, which features the largest building in the world, measured by volume. The building is so large that 911 regulation NBA basketball courts would fit inside.

Currently, the factory produces Boeing’s 747, 767, 777, and new 787 aircraft. Viewed above is the delivery flight line, where final systems checks are conducted before the test flights. The near row of aircraft are the Boeing 787 Dreamliner, with some Boeing 747-8 freighters in the back.

The factory tour allows up-close views of the different production hangars, where you can see the jets assembled in what can only be described as an example of how manufacturing technology has evolved over the years. Unfortunately, video and still photography (along with all electronic devices) is not allowed on the tour, so I’ve had to borrow some pictures from the internet to illustrate. I’ve noted all borrowed images. 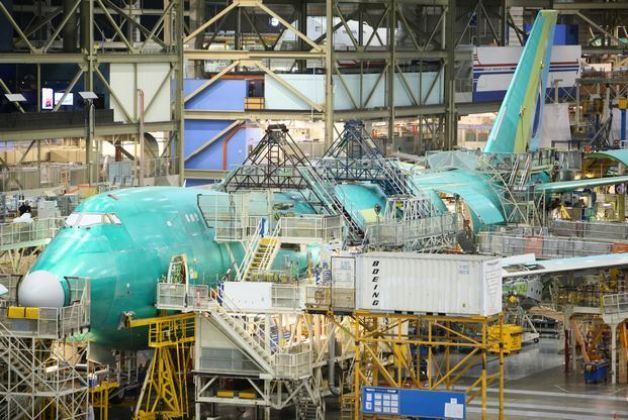 The first stop in the tour is the production facility for the oldest of the aircraft, the Boeing 747. The first flight of the original version of the 747 was in February 1969. The design has continued to be advanced over the decades and the current version, the Boeing 747-8 Intercontinental is larger, longer, faster, and much more fuel efficient than the original version.

The manufacturing process has in many ways remained the same. Almost all components of the aircraft are actually built by Boeing there at the Everett factory. Sheets of aluminum are attached to spars and stringers and each section of the plane – nose cone, tail, wings, fuselage barrels – are rivetted together, piece by piece. It takes four month from start to finish for each part to be made and eventually married together.

With the introduction of the Boeing 787 Dreamliner, Boeing revolutionized the production process. The Everett factory is now the final assembly point for the airplane, with all of the component pieces being produced at other facilities (by bother Boeing and contractors) around the globe. 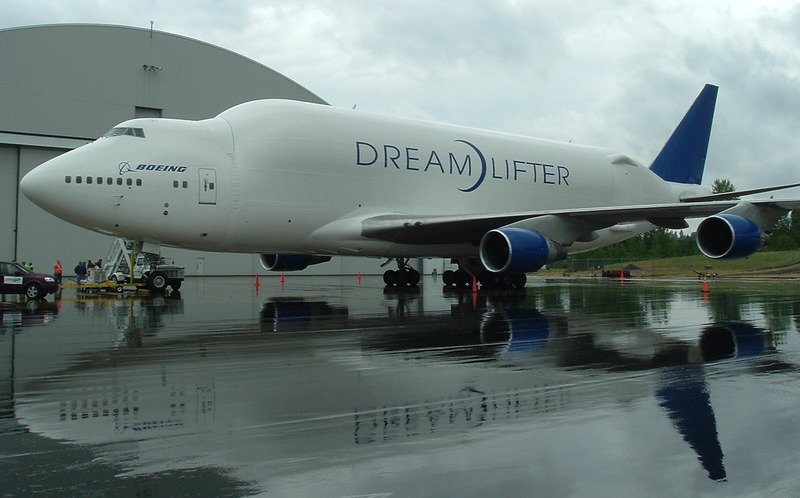 These component pieces are large – lengthy sections of the fuselage, entire wings, etc. In order to transport them from factories in Italy, Japan, and Wichita to the final assembly facilities in Everett, WA and North Charleston, SC, Boeing commissioned four modified B747-400 aircraft, known as Dreamlifters. These ungainly looking aircraft significantly reduce shipping time.

We were fortunate to see a Dreamlifter arrive a few minutes after parking at the tour center. I captured the landing on video, above. 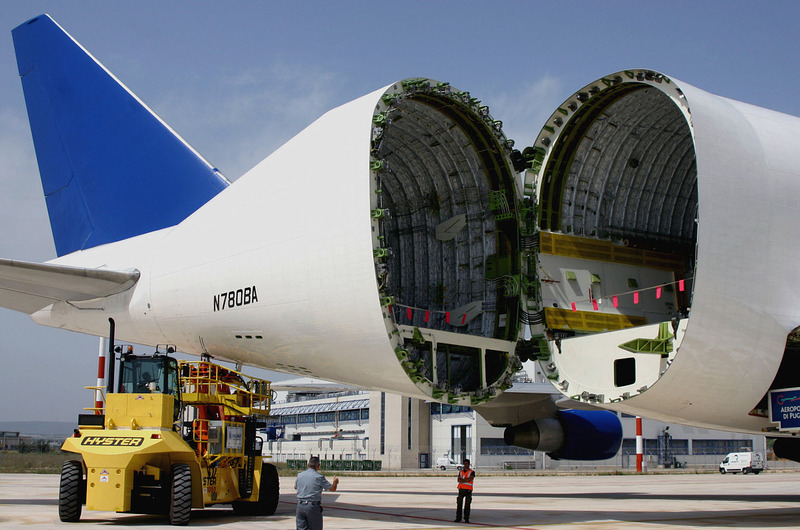 To remove the components from the Dreamlifter, the tail section swings open. A giant tractor with a head-sized ball bearing is placed under the tail to hold the weight of the tail, preventing damage to the door hinges. It is an impressive feat of engineering! 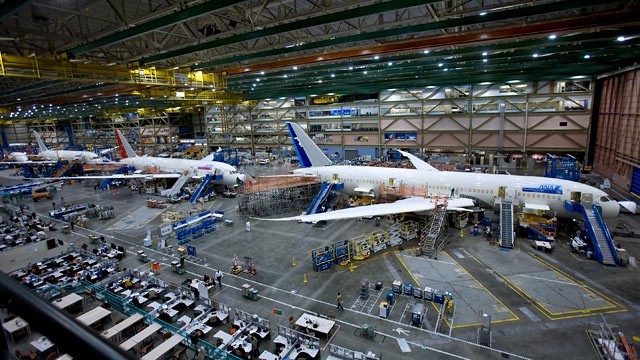 Once all the components are delivered, they are fastened together in a process that currently takes about seven days. That rate will increase as Boeing become more familiar with the assembly process, but is quite an improvement over the four months it takes to build a B747-8 from scratch.

Needless to say, the factory tour was impressive. Even though it was Sunday, a relatively slow production day, I could have easily spent much more than the allotted 90 minutes standing there, watching the assembly process.

The tour begins and ends on the other side of Paine Field at the Future of Flight Aviation Center. Compared to the Museum of Flight in Seattle, which we visited later in the day, the Future of Flight is relatively modest. Still, it provides several displays to help you learn more about aerodynamics and the airplane production process. 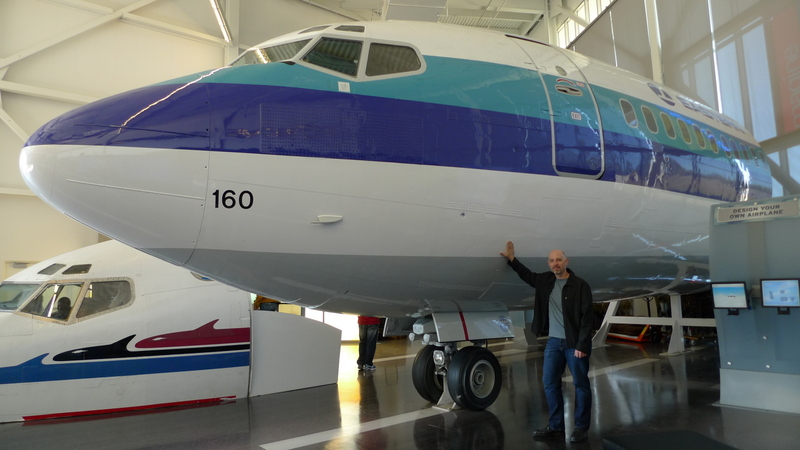 Posing in front of the nose section of a former Eastern Airlines Boeing 727 with a cockpit section of a Boeing 737 in the background.

Boeing Field and Museum of Flight

Finishing with the factory tour just about lunchtime, Jack and I decided to drive back to Seattle and visit the Museum of Flight. Located at Boeing Field, officially known as King County International Airport, the Museum of Flight has an extensive display of restored aircraft and many interactive exhibits. It also features the original Boeing factory, a red wooden barn dating from 1909. 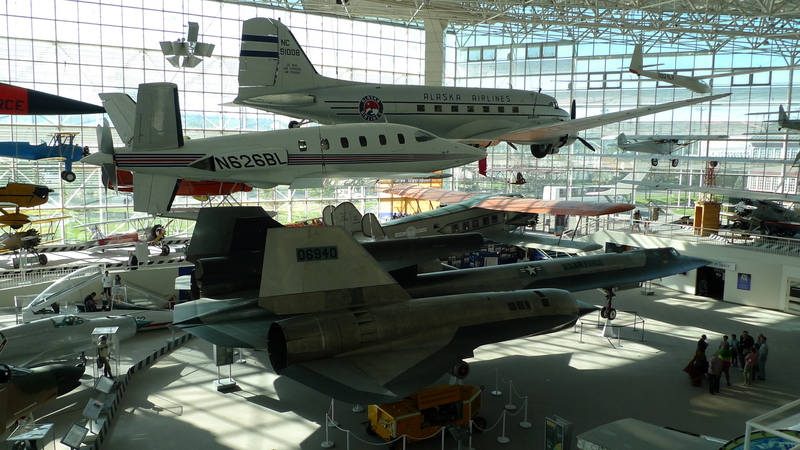 A view of the main display gallery, which features a restored Douglas DC-3 in Alaska Airlines colors, a Lear Fan 2100 with its unique Y-shaped tail and push-propeller, and a Lockheed M-21 Blackbird spy plane. 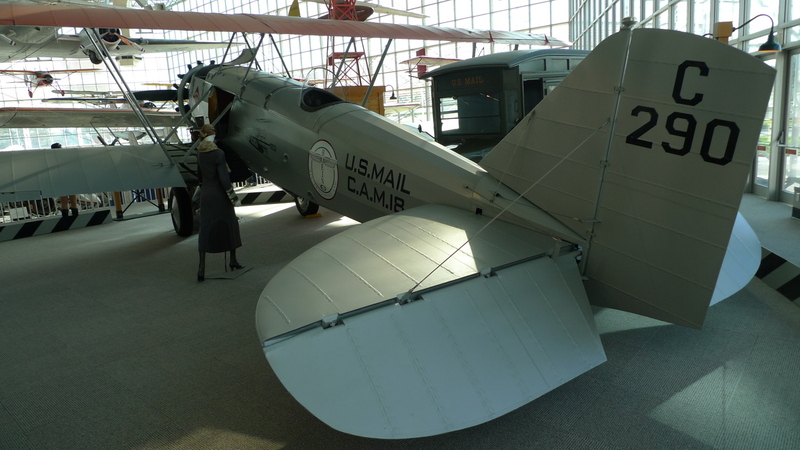 A reproduction Boeing Model 40B, the aircraft that enabled Boeing to win the transcontinental US Mail contract. The plane was able to carry twice the load of its competitors. 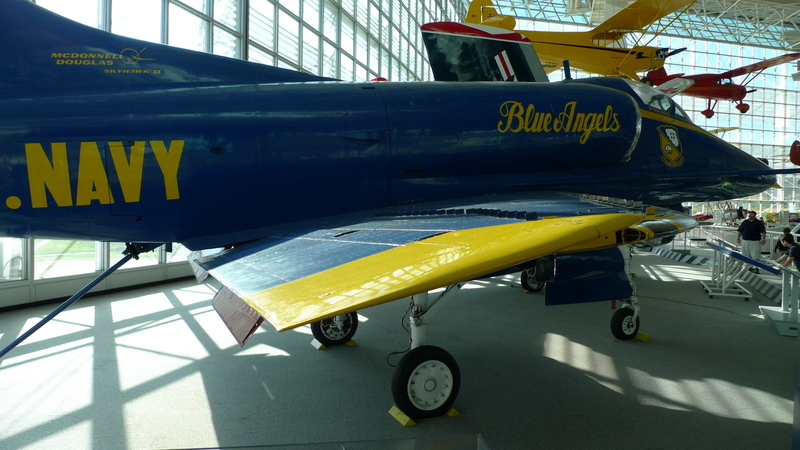 A Douglas A-4F Skyhawk II, a combat aircraft from the mid-1950s that was so light and nimble, it continued to be used for 35 years. This particular aircraft flew with the Blue Angels, the US Navy’s aerobatic team. This plane made a special impression on me because in my childhood, I had the opportunity to see the Blue Angels perform several times and this was the type of airplane they used at the time. 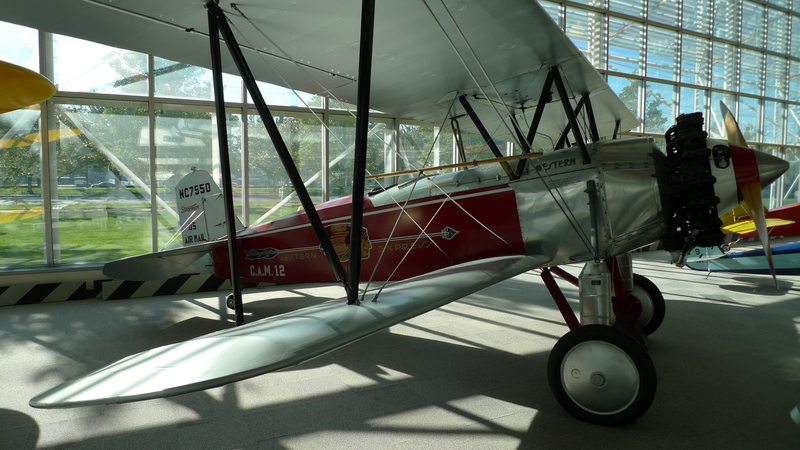 A restored Stearman C-3B, a rugged biplane from the 1920s that was used to grow America’s commercial air mail network. This one is painted in Western Air Express colors.

The Museum of Flight also features an outdoor display area across the street from the main museum galleries. There, you can walk around (and in some cases, through) many of the most successful commercial aircraft. 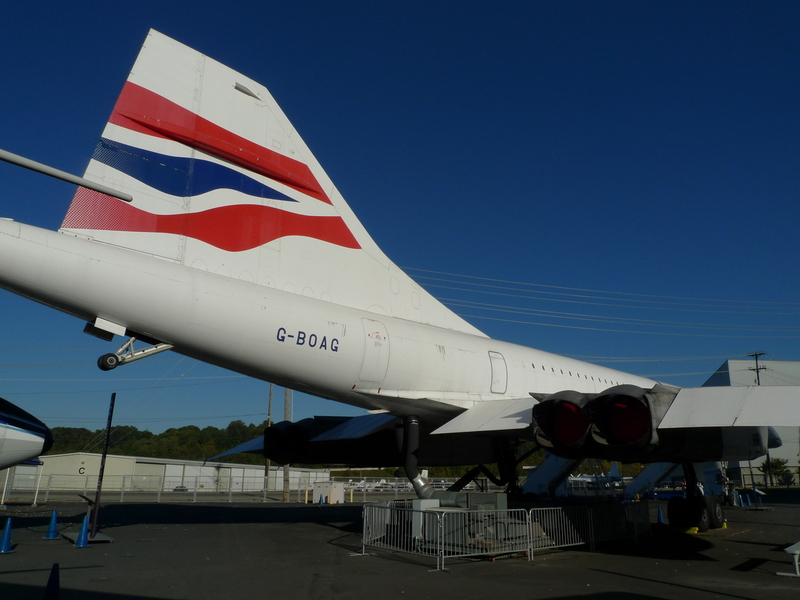 Immediately at the entrance to the outdoor gallery is the Concorde, a limited-edition commercial supersonic jet that shuttled the rich and famous across the Atlantic Ocean for almost three decades at twice the speed of sound. This particular jet is on loan from British Airways and it flew the final commercial Concorde flight. 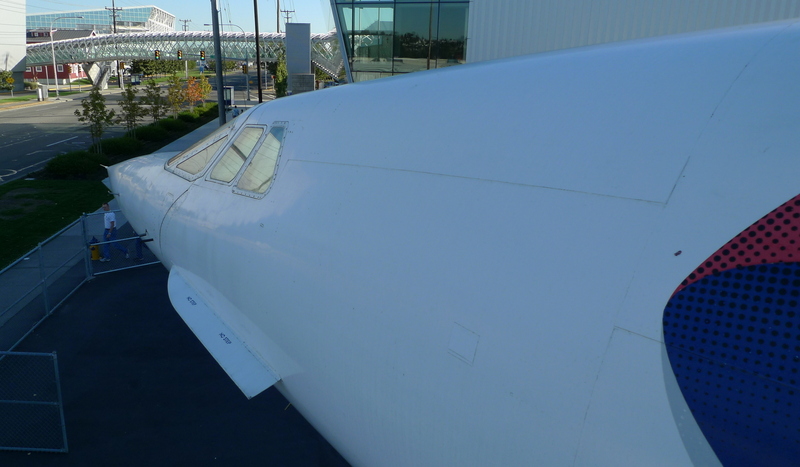 The plane is on static display and you can walk through its cabin and peer into the cockpit. Here is a view from the front passenger door, looking to the needle-like nose, which was dropped about 10 degrees when the plane of was on the ground, so the pilots could see the taxiway in front of them. 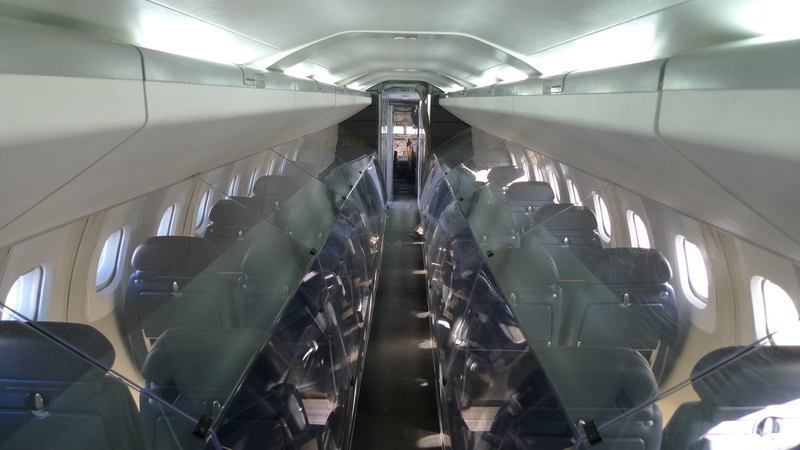 Inside, you get a sense of how cramped the Concorde was. The interior height was only 6 feet, 5 inches and the two-by-two seating was no more spacious than current premium economy seats. That said, flight time across the Atlantic was only three-and-a-half hours, so you arrived at your destination much more quickly than on a conventional airplane.

The museum also has the first “Air Force One” – a Boeing VC-135B, the military variant of the Boeing 707. This particular aircraft was delivered when Eisenhower was president and was replaced just three years later by a more advanced version. 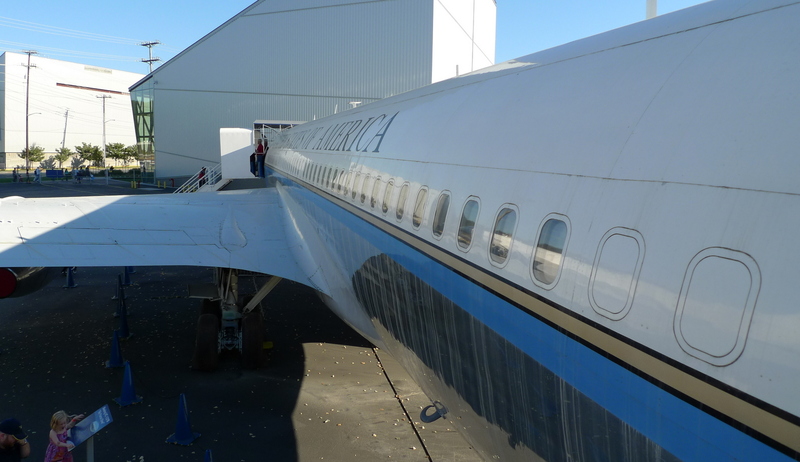 The aircraft is also open for walk-through tours, giving you a sense of how the presidents and other VIPs traveled when conducting government business. 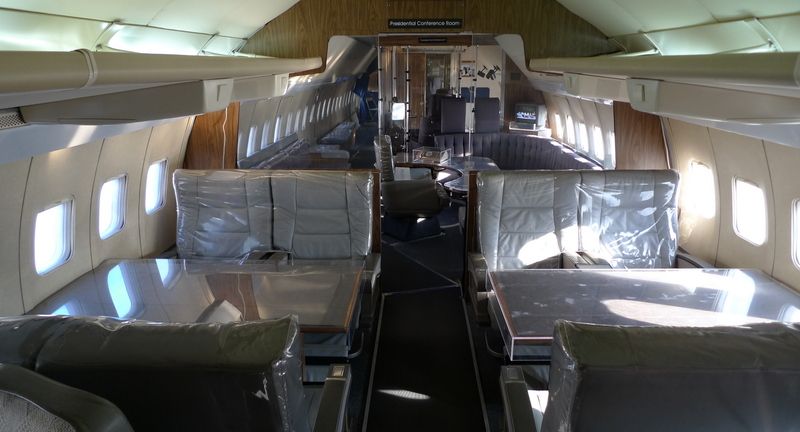 Compared with the current fleet used to fly the president, variants of the widebody B747, this older Air Force One looks very small. Above, you can see staff seating with the presidential conference room in the background. 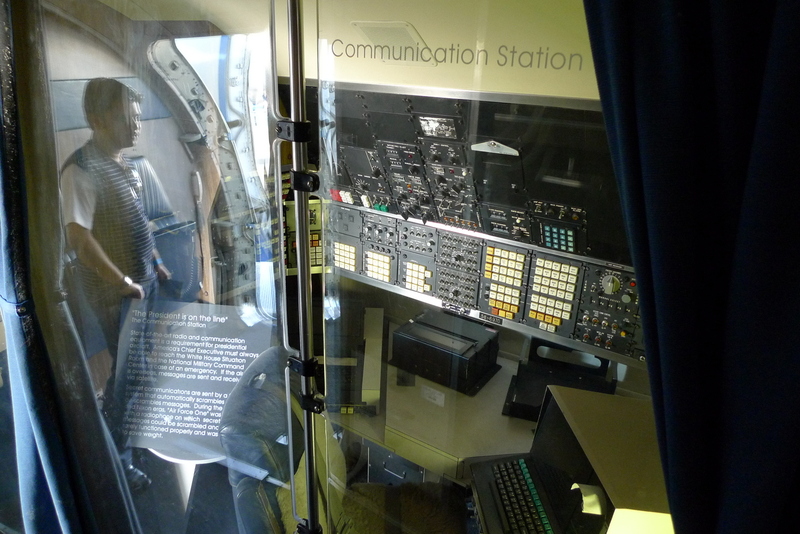 Behind the cockpit and front galley is a communication station which enabled the president to communicate securely from his airborne White House. 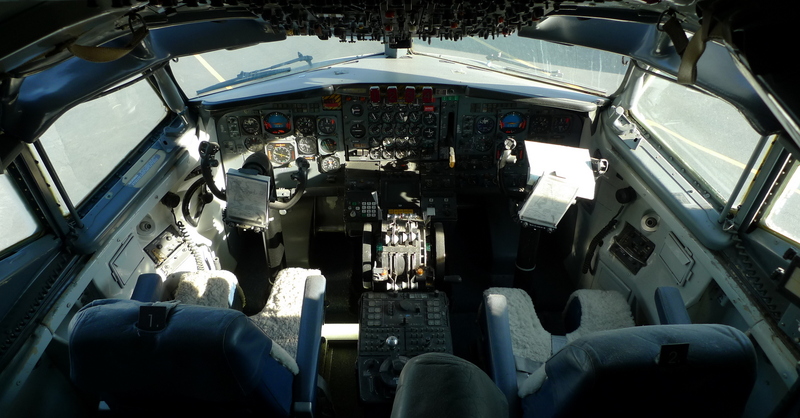 The cockpit of the Boeing VC-137B, which looks primitive with all its dials and gauges, when compared to today’s “glass” cockpits with their screens and video monitors. 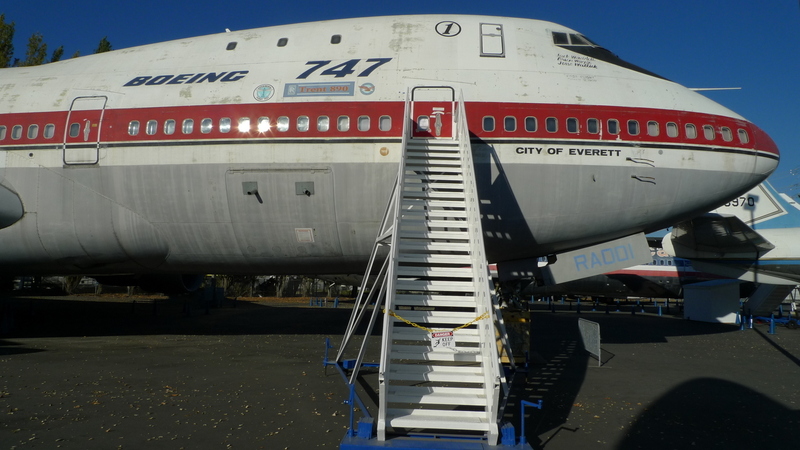 The museum also has the first flight-worthy Boeing 747. Named the City of Everett in honor of its birthplace, this Boeing 747-121 served as a testbed for Boeing over the years and is sometimes open for display. Unfortunately, the day of our visit, it was closed.

The final item of interest was a Lockheed 1049G Super Constellation. This piston-engined aircraft was one of the most graceful airplanes ever designed and the “G” version first flew in 1954. By that time, it was clear that airlines were moving in the direction of jet planes and the Constellation was one of the last piston-engine planes. This particular plane was delivered to Trans-Canada Air Lines. 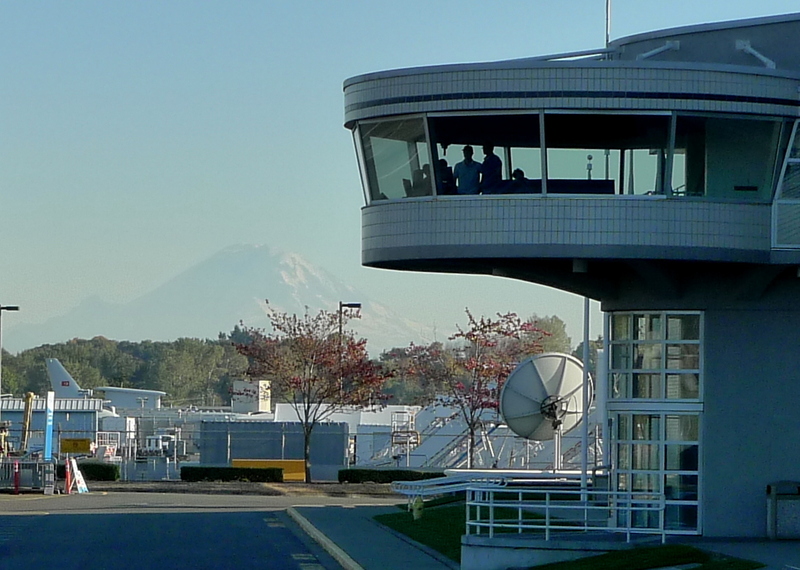 View of Mount Rainier in the hazy distance from a control tower exhibit in the museum. You can listen to the radio broadcast from the Boeing Field control tower and watch airplanes (mostly general aviation) land and take off.

It was a full day of aviation geekiness, probably more than most people could handle but, in my view, a day well spent.