The past week or so, things have just been off.  My mood has run foul, Tawn and I have had a hard time coming to agreement on some decisions we would like to make, and things have generally just been funky.

Casting about for answers, I looked at the tides, the phases of the moon, and changes in the weather systems with an eye to determining what it was that was causing these unusual bumps in the road.  Then it hit me: the problem is with my coffee grinder.

You see, about a year ago we caved in and purchased an espresso machine.  A bit of a luxury item, yes, but one that really helped set the mood for the start of our day.  The machine, a Starbucks branded one, has performed well all year but a bit more than a week ago it seized up in what the instruction book called a “vapor lock.”  When opening the valve for the steam wand, water would instead come out the brew head.  We could get all the espresso we wanted but none of the steamed milk. 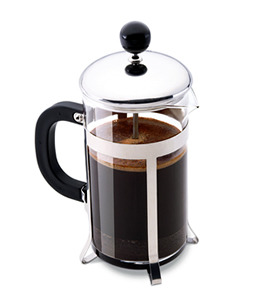 After trying all of the troubleshooting remedies called for in the instruction booklet, I caved in and brought the machine back to the store where they are handling repairs.  Good service on their part so no complaints there.  But in the absence of our espresso machine I’ve been brewing our morning joe in a French Press.

French Presses are the glass containers with a plunger you press down after several minutes of steeping to separate the grounds from the brewed coffee.  They have the reputation of producing wonderful coffee.  Some aficionados say that French Press is the ideal way to appreciate coffee.

But each morning we wound up with mouthfuls of grit in our coffee, small black flecks floating to the surface of the scalded milk foam.

When I examined the grounds they appeared quite sizable. so I was confused as to why the coffee was turning out so poorly.  What I determined was that our coffee grinder, a Krupps model that is reportedly one of the higher quality grinders, grinds very unevenly.  In addition to some large chunks – half-bean size! – there are other parts that are pulverized to a fine powder.  The result was coffee that is still watery but also contains lots of sediment, a brew that does nothing other than put me in a foul mood.

Finally realizing what might be the source of all my troubles, I headed to the coffee shop, bought a half-kilo of coffee and had them grind it in their professional grinder.  Sure enough, the coffee was a uniform coarseness and when I put it in the French Press this morning, the resulting coffee was richly flavored and without any significant sediment.

I was happy.  Tawn left for work with a smile on his face.  I think things are looking up!