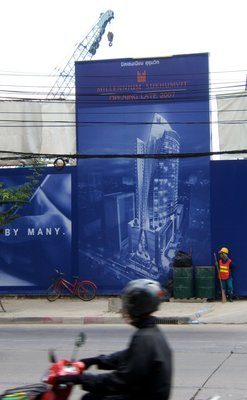 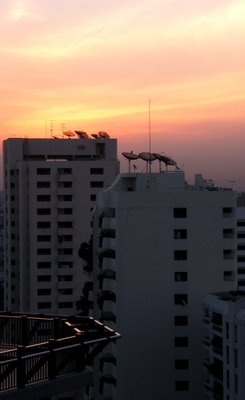 Second entry for the day.  Man, am I productive!  Must be that telecommuting thing.

So it was a beautiful sunrise this morning in Khrungthep.  The picture on the left captures it quite nicely.  I find that I’m waking up without the aid of an alarm by about 6:00, which lets me get an early start on the day.

I can shower, shave, get dressed, and prepare coffee and breakfast before Tawn wakes up.  Then, while he gets ready for work I can start working on the computer, take pictures of the sunrise, etc.

So it was a very productive morning, but since I don’t have DSL yet (and it may still be a long while before it happens – would you believe that they’ve run out of numbers in our area?) I had to go down to the local True Internet coffee shop, conveniently located in the “Metro Mall” – a small stretch of the Metro station that includes four places to get coffee, five snack places including a Dairy Queen (like I never left the Midwest) and a place to get your hair cut in 10 minutes for 100 baht. 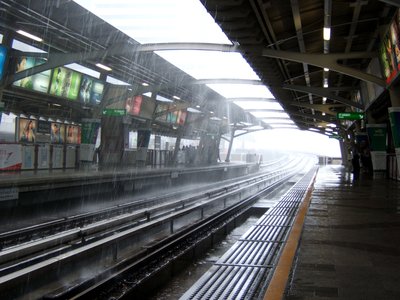 Once again I made the mistake of leaving home without an umbrella.  After leaving Tawn at his office after lunch it was starting to rain.  So I went to Central Chit Lom department store to shop for some kitchen cabinet shelves.  They didn’t have any, so I took the Skytrain to Central Silom.  By the time I arrived, it was absolutely pouring.

The wind was also blowing fiercely so that most of the protected, covered areas of the station were still getting soaked.  As people exited the train, instead of heading for the stairs (which were getting dumped on) they huddled around the poles as this seemed to be the only dry area. 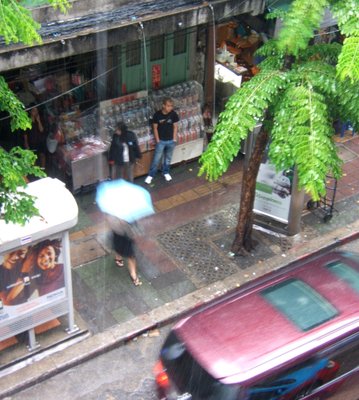 After shopping at Central Silom, which is thankfully connected by a covered walkway to the Skytrain station, I walked to the Metro station which is connected by another covered walkway.  But it is narrom and doesn’t really provide much protection from the elements.  In fact, there’s one spot where it is running underneath the Skytrain tracks and a downspout dumps the all the rain from the tracks directly on the steps from the walkway to the street below.  Really not a genius engineering design.

The Metro station at Si Lom is about four stops away from my station at Sukhumvit and Asoke (Soi 21).  The straight-line distance is maybe two miles, if that.  When I emerged from the station at Sukhumvit, the ground was bone-dry.  Not a drop.  The clouds overhead didn’t even look that threatening.  So my walk home was dry, not the flooded street that often befalls Asoke when there is heavy rain.