Along Niemenhamen Road, the artsy district of Chiang Mai located near Chiang Mai University, sits a nondescript restaurant with a utilitarian name: Burmese Restaurant. Recommended by a friend who moved to Chiang Mai recently, a recommendation confirmed by several Burmese staff members of the hotel at which we stayed, I went for dinner.

The restaurant sits directly on the street at the corner of Soi 8, the cooking area and one dining area located outdoors, another dining area indoors. The crowd of diners was very light this Friday evening, maybe due to the impending rain. The friendly staff welcomed us and offered us a table indoors, turning on fans to ensure our comfort.

There are two menus, each a single page with about thirty items. One menu features Burmese dishes. The other menu features Thai/Chinese style dishes. We ordered from the Burmese menu with the exception of one vegetable dish. Unfortunately, several items we ordered were not available either because they were out already or the dish is not offered every day.

Here is a look at the dishes we ate – all of which were tasty. The entire bill for five diners was less than US$20. Needless to say, I’ll be back next time I am in Chiang Mai. 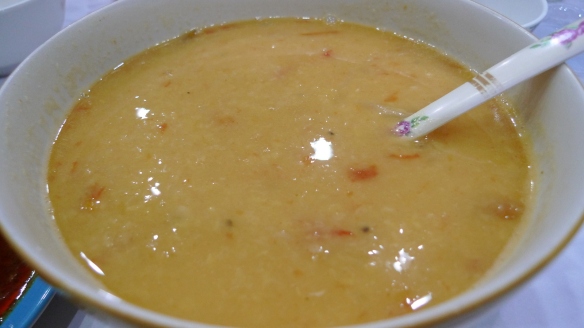 We had ordered a curried fish soup that is the national dish of Burma. Sadly, it was not on the menu so we instead ordered this bean soup, which was tasty although not very distinctive.

The goat curry, which our local friend enthused about, was also not available that day so we chose the chicken and potato curry instead. While it may not look particularly attractive, especially because of the oil slick on top, the curry was very flavorful and we ordered a second serving.

The stand-out dish was this tamarind leaf salad, one of several salads on the menu made with what I would consider “unusual” ingredients. This salad was refreshing and it is difficult to describe the flavor of the leaves. The flavor is entirely pleasant and entirely unlike the taste of the tamarind fruit. One blogger described it as “eating al dente ferns”, which is about right. The salad is sweet and sour and salty with chopped peanuts and tomatoes.

We also ordered a tomato salad, which was a pleasant surprise. With the exception of cherry tomatoes, which are generally very red and sweet, tomatoes in Thailand are usually pale pink and crunchy. These were anything but, and with onions and cilantro, they made for a refreshing dish.

The menu contained many items translated into English as “curries” that are different from what you might expect, especially if you consider a curry as something with coconut milk in it. Instead, these curries feature a variety of spices but lighter sauces. The above picture is of an eggplant curry dish that was very nice. 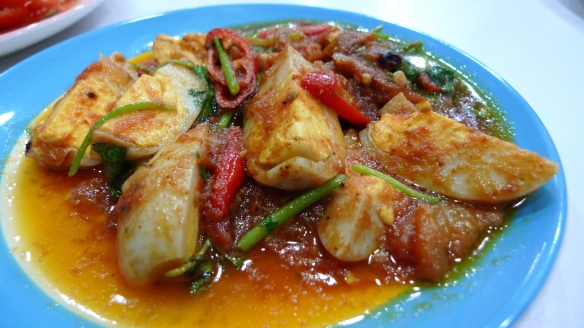 There was also a boiled duck egg curry dish that was tasty. While you see a lot of chilies in this (and other) dishes, they were not particularly spicy at least by the standards of Thai cuisine. As one Burmese friend described it, the food is more similar to Northern Thai cuisine than the super-spicy Northeastern or Southern Thai cuisines. 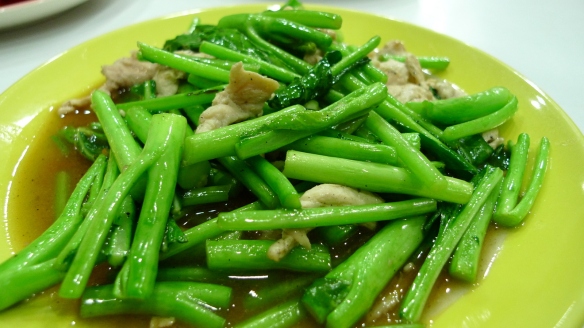 The only item we ordered off the secondary menu was this simple stir-fry of greens and pork. While the salads we ordered had lots of greens, it felt like another dish of vegetables would help balance things out.

This is probably only the third or fourth time I have eaten Burmese food, and the first time in more than a dozen years. Without a doubt, I need to seek it out more often!