My cousins’ son just turned one and to celebrate, they held a “smash the cake” party along with one of their friend’s son who was alos turning one.  Another friend who is a photographer came along and offered to shoot the party since she doesn’t have a lot of experience with this type of event. 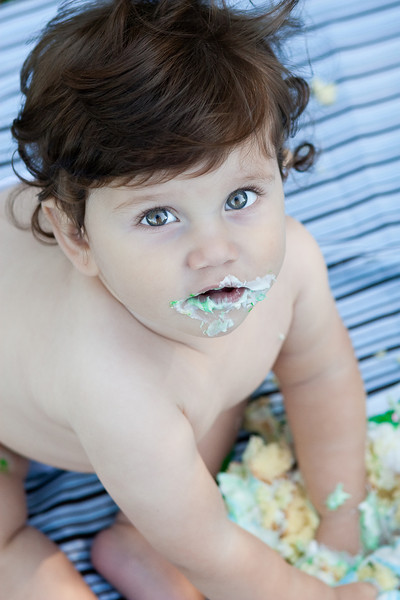 Now, I’m probably doing the wrong thing by posting a picture of my cousins’ friend’s son rather than my own cousins’ son, but I thought this picture was especially adorable.

The whole cake-smashing party seems strange to me, though.  I don’t remember my first birthday but I hadn’t previously heard of making the cake-smashing the point of the party.  Everything is set up on a washable tablecloth and the baby is encouraged to smash the cake.  Did I do that when I was one?

I’ve been away for two days and apologize for not writing.  Would you believe I left town for the weekend and didn’t bring my computer with me?  To top it off, I couldn’t tell you where we were going beforehand because someone whose surprise 40th birthday party was in Kuala Lumpur this weekend, reads this blog.

Tawn and I arrived at the Grand Millennium Hotel on Jalan Bukit Bintang just before 1:00 am Saturday.  This old hotel was bought and remodeled just a few years ago and is very centrally located to much of the action in downtown KL.  Here’s the view from our room the following morning, looking down at the year-old Pavilion Mall. 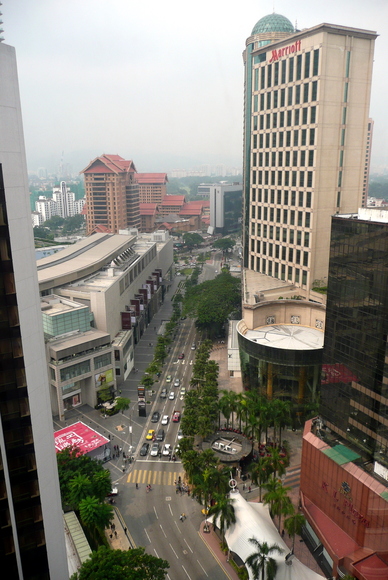 We enjoyed some relaxing time in the afternoon after sleeping in late, spending a few hours by the pool on a relatively cool tropical afternoon.  After confirming details with the party’s host, one of the older sisters of the birthday girl, we walked to Le Bouchon, a French restaurant just a few minutes from the hotel.

Our party was held in a small back room, more like a cellar, that was a really nice setting.  Stephanie, who was my colleague when I worked in Hong Kong and then was later our roommate in San Francisco for the better part of a year, was shocked that we were there.  She was expecting just her family members. 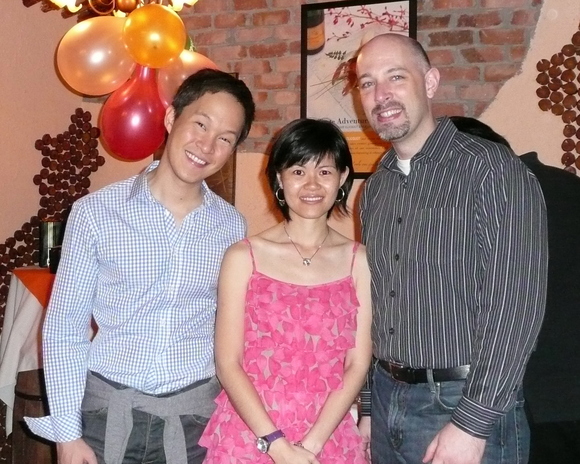 Above: Tawn, Stephanie and Chris at Le Bouchon.

We were there from 6:30 until about 11:30, a proper Parisian-length meal!  The food was very tasty.  The owner and head chef is French and stopped in to see us.  Entrees were as follows: 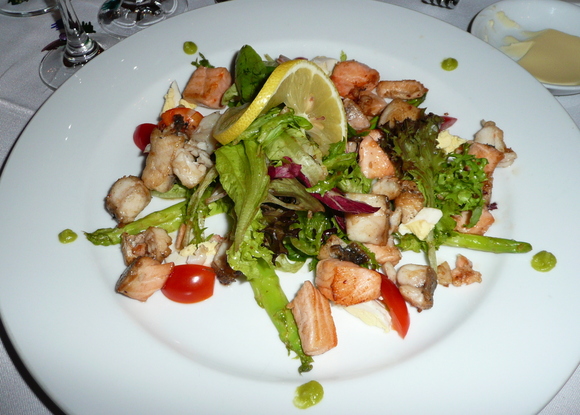 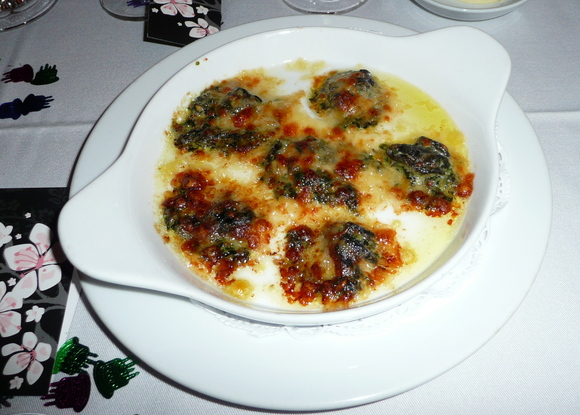 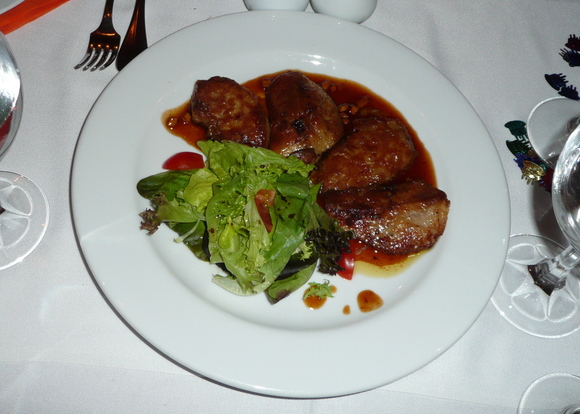 These were fantastic, especially the foie gras.  Not to get animal rights activists riled up but I firmly believe that government regulation against the production of foie gras is foolhardy.  If you don’t like it, don’t eat it.  If you like, get the word out to as many people as you can about how it is produced, and then let us decide of our own conscience whether or not to eat it. 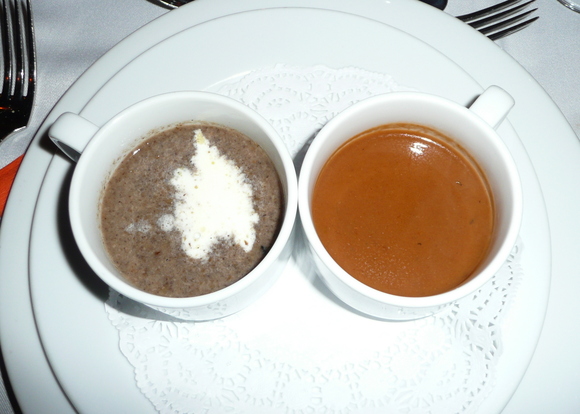 We enjoyed a pair of soups, a wild mushroom and a prawn bisque.  These were good, although nothing particularly unique about them.

Everyone was able to choose a main course from the menu, which gave us a lot of variety. 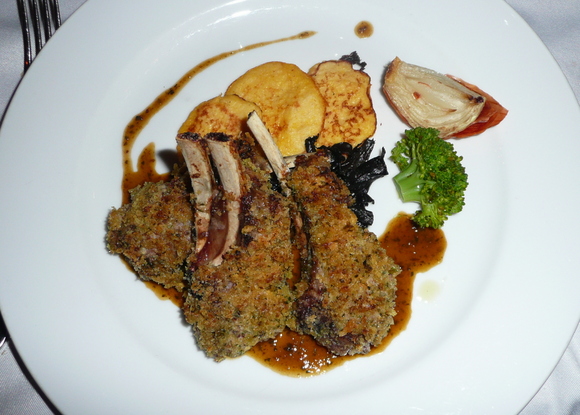 I enjoyed a rack of lamb ribs with a mustard and bread crumb crust.  Very tasty although maybe just a little too much mustard. 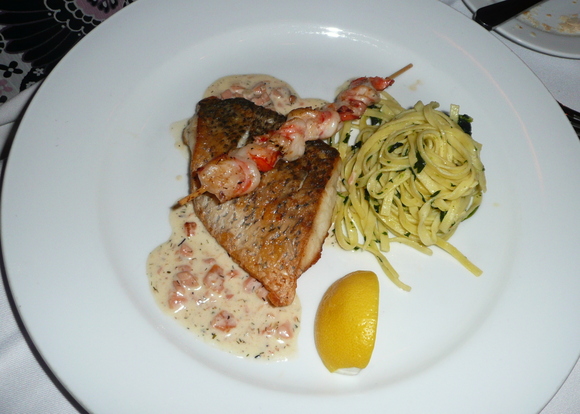 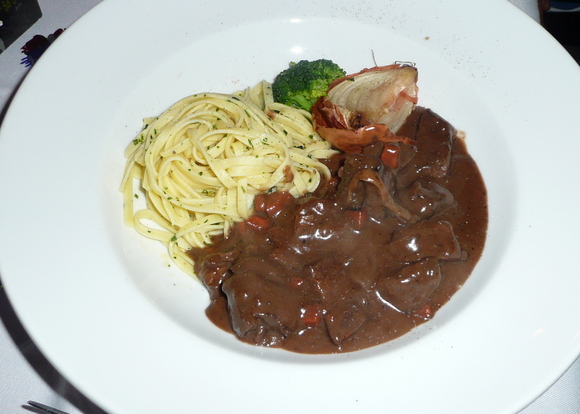 Venison stew.  Didn’t have a chance to try this. 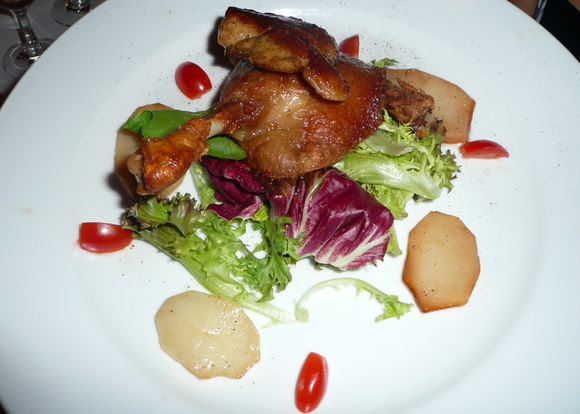 Duck confit with more foie gras on top.  This was lovely.  Confit is such a nice food. 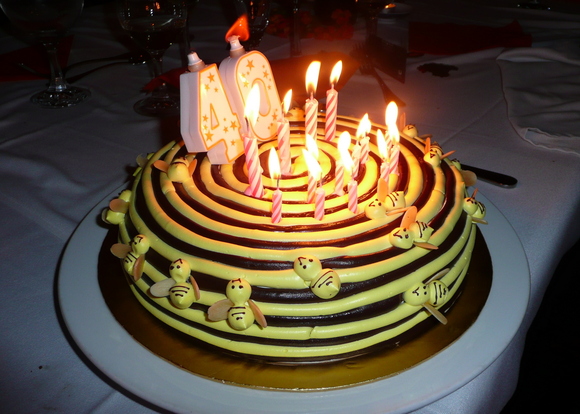 For dessert, we had a bee cake that was surprisingly moist.  Drinks included several bottles of champagne including a Moet et Chandon I picked up at the airport duty free.  I probably had a bit too much to drink… becoming such a moderate drinker in my advanced age. 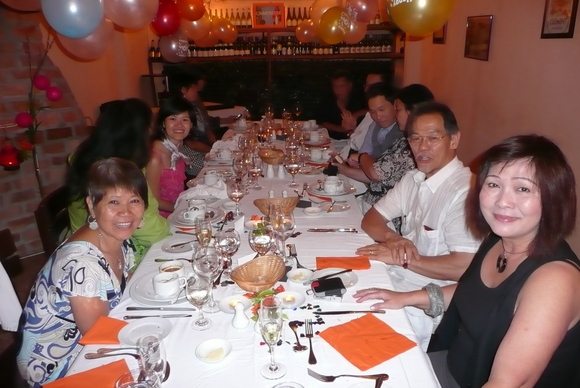 The whole evening was like a Chinese Malaysian version of My Big Fat Greek Wedding, a very warm and boisterous group.  We really enjoyed being a part of it and were glad we could be there to help Stephanie, in pink on the left above, celebrate this milestone.  Here’s to many more years of good health and great happiness!