This entry would have been written earlier today, or yesterday, or even the day before.  But I wanted to post some video that I shot and am having difficulties.  You see, the nifty new camera I bought – a Panasonic Lumix TZ3, which I really do think is terrific – outputs video in a .mov format.  This is an Apple-proprietary format that can’t be edited with the existing software I have on my Windows-based laptop computer.

I’ve been searching for a way to convert the files to something I can work with, but the freeware and shareware I’ve downloaded don’t seem to work correctly.  So I caved in and went to the Apple website to spend $30 buying the upgrade to QuickTime Pro.  My order is “being processed” and I don’t know how long that will take.  I’ll probably end up having problems because my billing address is in the US but I’m connecting to the internet in Thailand.

Out of patience and not wanting my readers to think I’ve forgotten about them, I’ll go ahead and do the post the traditional way, with still pictures.

The big event recently was the dress rehearsal of the royal barge procession.  Last done in June 2006 in celebration of the King’s 60th anniversary on the throne, this rarely-seen most of monarch transportation is being rolled out again next week for the thrice annual changing of the Emerald Buddha’s robes, in Wat Phra Kaew in the Grand Palace.

Using the barge procession to go 3 km down the Chao Phraya River is a whole lot of effort, especially since His Majesty is still in the hospital recovering from something stroke-like.  The good news is, he is recovering nicely.  Still, I think some other member of the royal family will travel in his place.

I’m quite surprised that the barges aren’t being used instead for something related to his 80th birthday in early December. 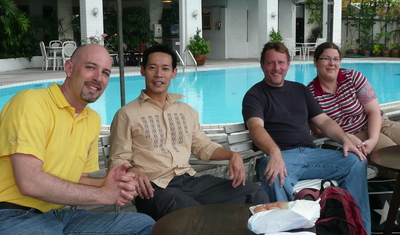 Nonetheless, I went with Roka, Ken and Francois to the River Mansion guest house, which sold tickets for seating on their poolside (and riverside) deck for viewing of the dress rehearsal.  The view was spectacular, the weather cool, overcast and breezy, and there were only twenty people there viewing the barges.

Quick introduction for those of you who try to follow the cast of characters in my blog: Francois is a friend of Stuart’s, most recently from San Francisco but raised in Kentucky, who has bought a condo here and will be splitting his time between the Bay Area and Khrungthep.

We had a really good view and drinks and a plate of appetizers was included in the admission price.  To give you an idea of the view and how close we were to the river: 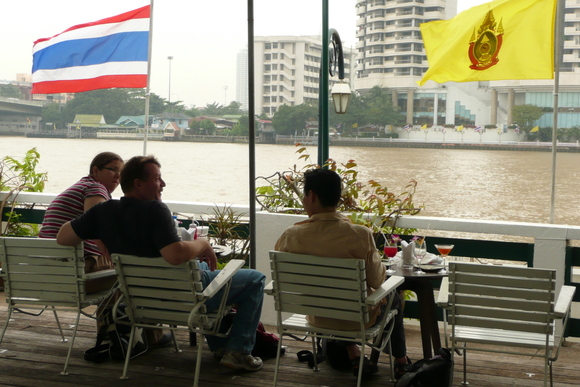 We spent a good ninety minutes waiting and then the barges went past in about thirty minutes, a little more rushed than normal but this was their first dress rehearsal.  They have two more before the big day on Tuesday.  It was still very spectacular to see and amazing that they take more than 2,000 sailors to man the 52 barges and are able to control them so smoothly and gracefully, rowing to the stentorian chants of the Brahman priests.

Expect to see more monarchy fever in the next two eight weeks as we approach the big 8-0 on December 5th. 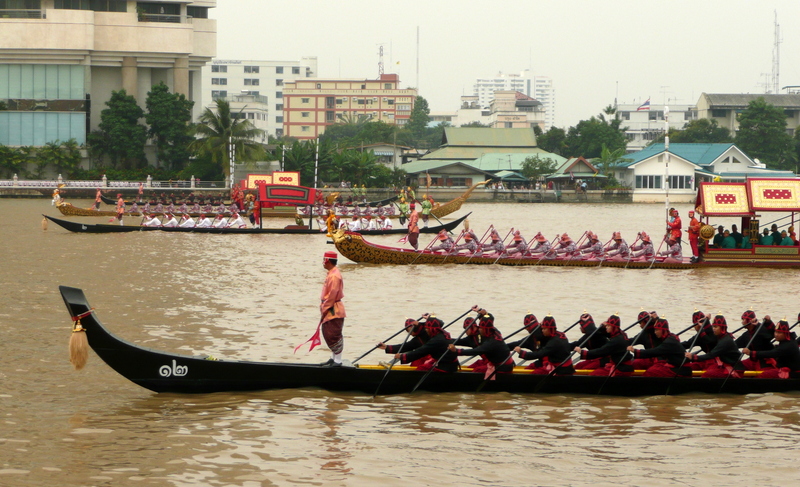