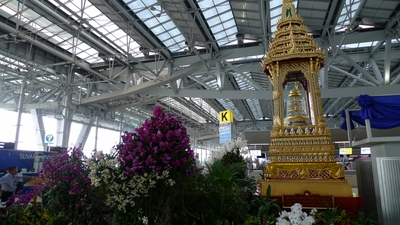 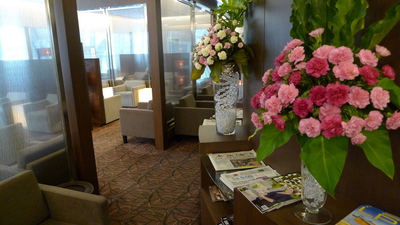 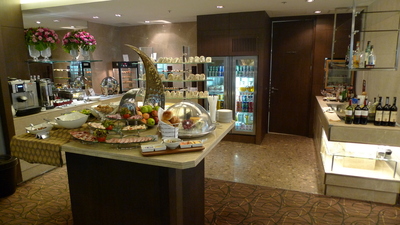 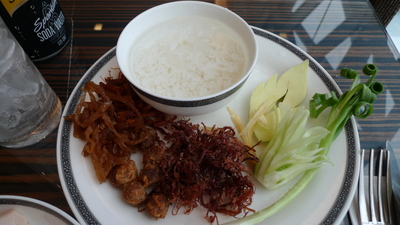 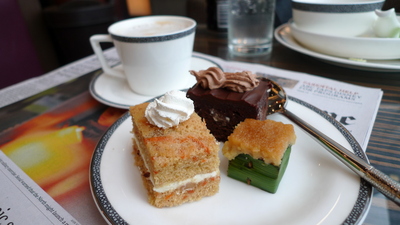 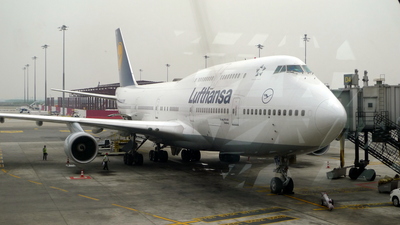 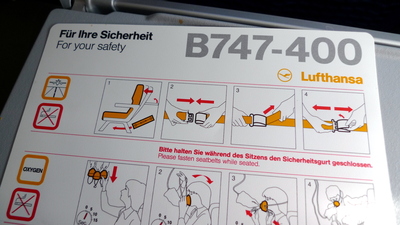 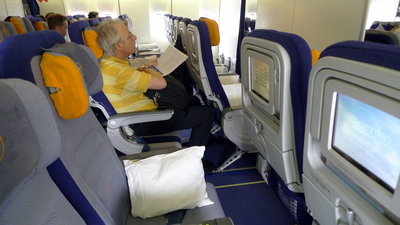 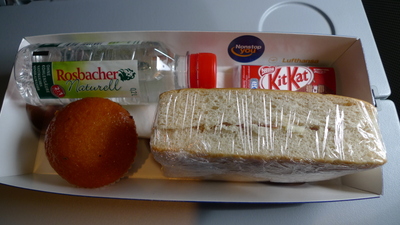 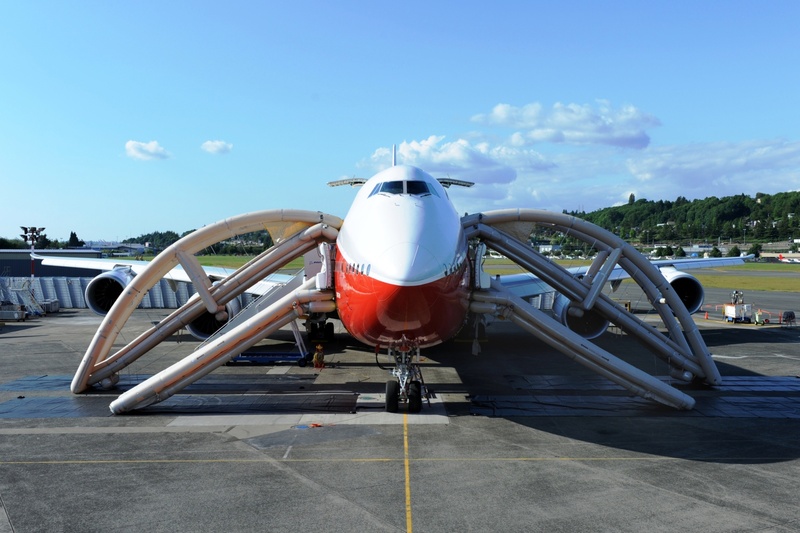 Came across this photo that shows Boeing’s newest jumbo jet, the B-747-8, with its emergency slides deployed.  What caught my eye is that the upper deck slides now have a built-in structural support in the form of an arch.  Considering how far above the ground the upper deck is, I guess the arch provides support against gusting winds.  Talk about a fun-house slide!

On a related note, here’s a short video showing the deployment of the upper deck slide on an Air New Zealand Boeing 747-400, the previous generation of the plane.  The slide’s support structure is less elaborate, but it is still interesting to see how it deploys.  Let’s hope I never have to see one of these deploy in person.

Sorry that my posting (and reading and responding to others’ entries) has been slower than usual as of late.  Many of my recent entries have required a lot more leg work.  Here’s the latest:

Two Saturdays ago, as Tawn and I were driving along Ramkhamhaeng Road on an errand to the northeastern outskirts of Bangkok, we were taken by surprise when we saw the front third of a Boeing 747 jumbo jet propped up alongside the street. 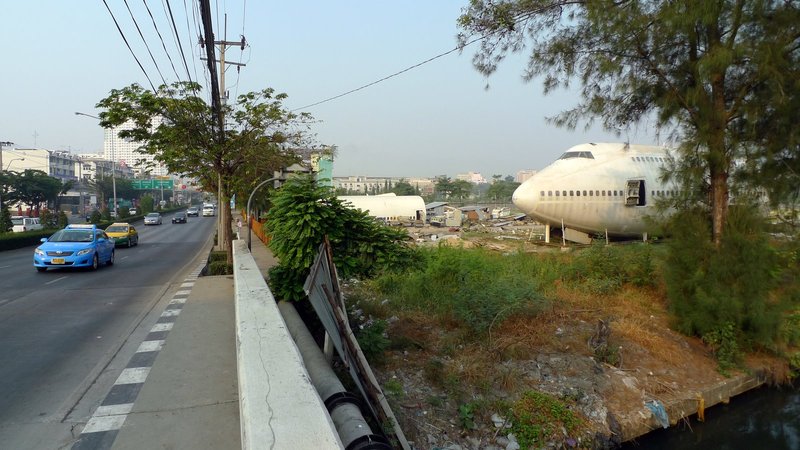 This is neither an industrial area nor anywhere particularly close to the airport, so for there to be a pair of airplanes being disassembled in this neighborhood is downright strange.  While there is a fence along the front of the property, there is no proper gate along the entrance. 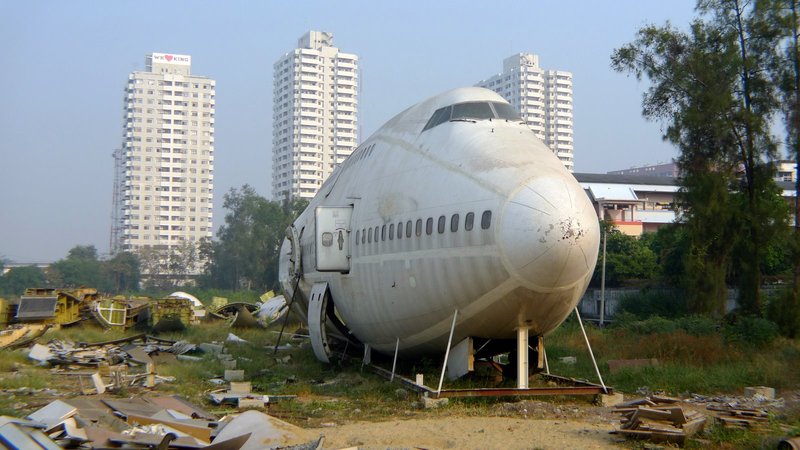 Curious, we headed back early the next morning, arriving just after 7:30.  A street sweeper sat in her small rest shack, more of an open-air stand, and Tawn chatted with her while I wandered around taking pictures and video.  “Sure, go on in,” she said.  “The workers won’t be up and working for a while still.”

The result of the exploring is a five-minute video.  I think you’ll find it very interesting.  I’m happy with the results.  For those of you without five minutes to spare, here are some of the pictures: 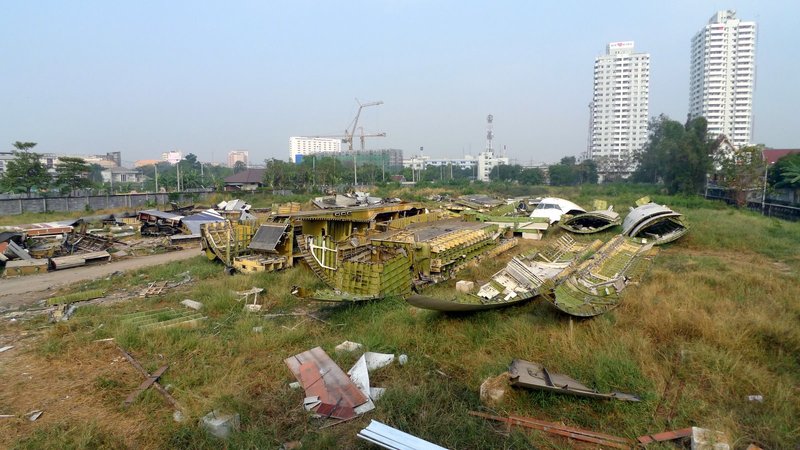 The entire site is probably four acres (16,000 sq meters), adjacent to a school, temple, and canal.  Condo towers and office buildings are visible in the distance and it is really a strange place to be disassembling airplanes. 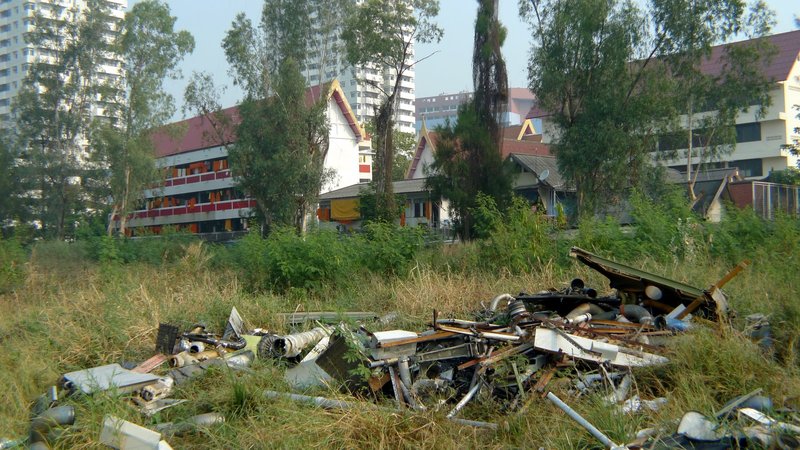 The monk’s dormitory (robes hanging to dry) is visible next door.  I guess this view reminds them of the fundamental Buddhist teaching about all things being impermanent. 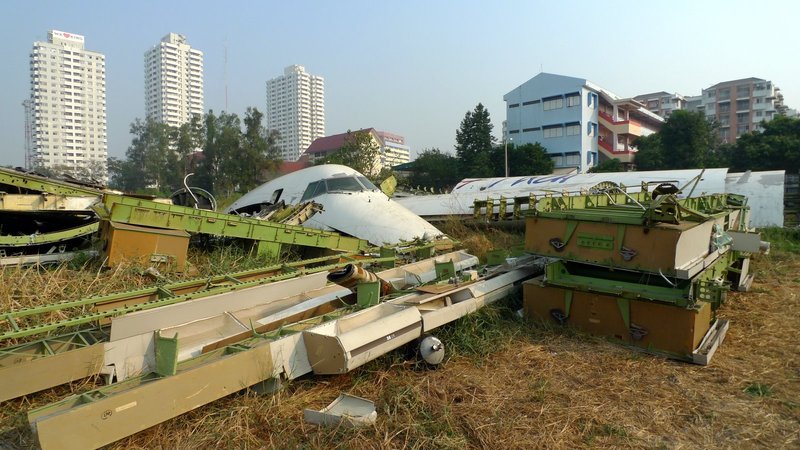 There are two planes here, both from Orient Thai Airways, a local carrier that operates limited scheduled service and also does charters.  I like how the top of this plane looks like a whale surfacing from the waves. 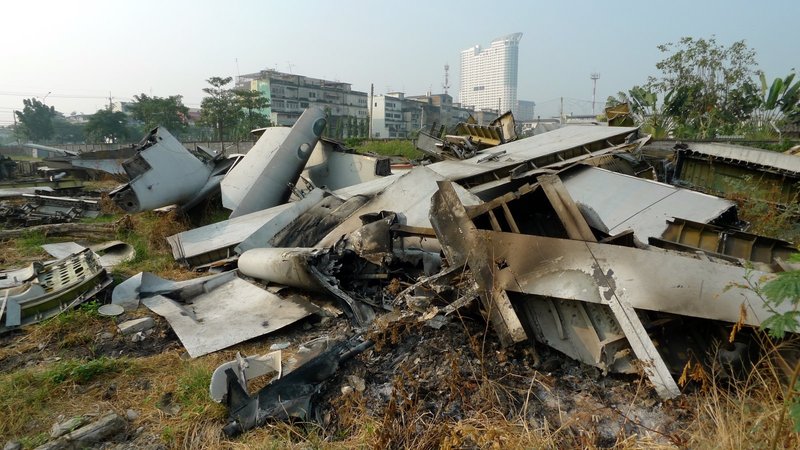 You could be mistaken for thinking this was the set of an airplane disaster movie.  Every area that has been cut by a welding torch is scorched black and there also looks to have been a few small fires set.  Pieces are still very identifiable, though, provided you know your airplane parts. 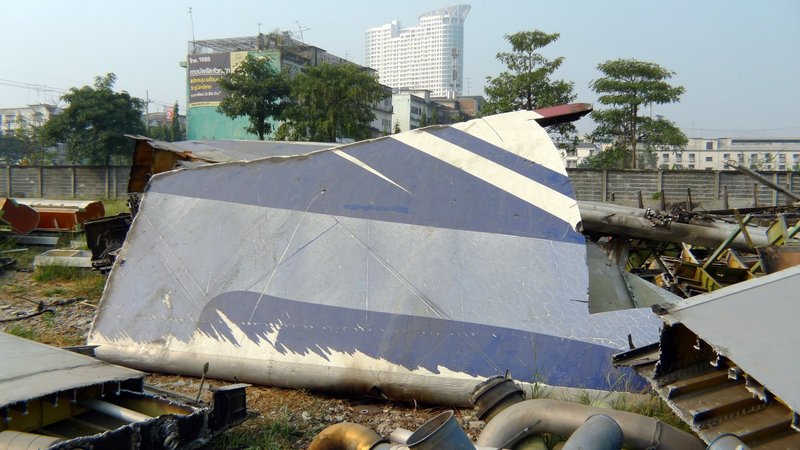 The vertical stabilizer (tail) of the plane, being cut into smaller segments for disposal.  The red and blue color scheme, which was meant to represent the Thai flag blowing in the wind, has been deconstructed. There were hundreds of oxygen masks on the property, most still stowed in the overhead compartments that had ben removed and stacked.

Near the front of the property, galleys and lavatories, which are modular units, were standing about, stripped of carts and other supplies, although with the ovens still intact.  Recalling his days working as a regional flight attendant for United, Tawn pretended to be setting the ovens to warm a meal. 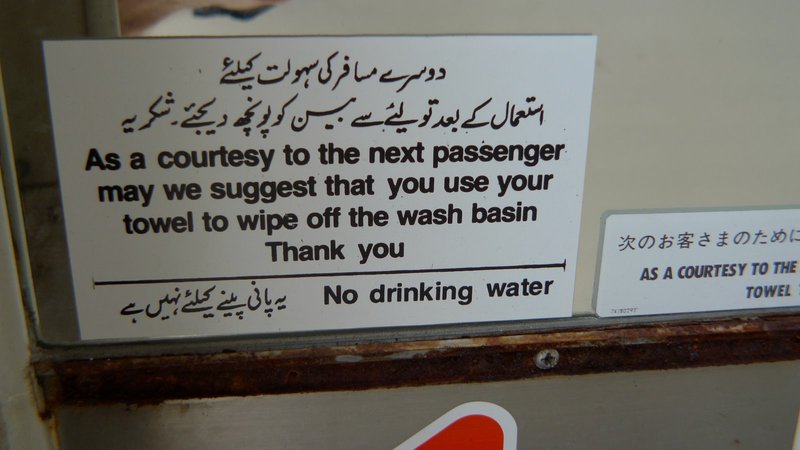 Orient Thai had a fleet of about a half-dozen older model 747s.  Their only scheduled international service was to Hong Kong and Seoul, and they used their larger planes mainly for charters, especially during the Haj.  Note the lavatory signage in Arabic as well as in Japanese.  This plane’s original operator was Japan Air Lines. 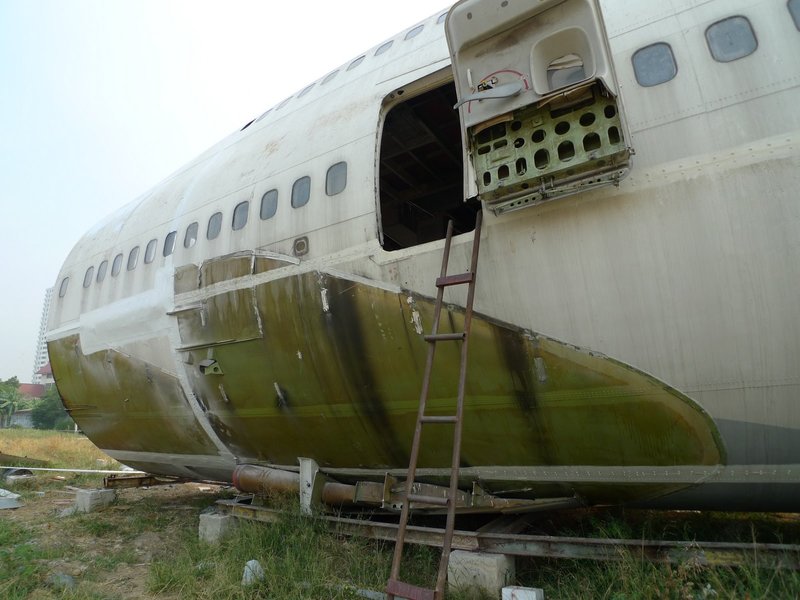 A two-door segment of one of the planes – basically, the front third of it – was intact and propped upright.  The street cleaner explained that it was destined to be sent somewhere to become an airplane-themed coffee shop.  “You can climb up!” she said.  The homemade ladder had very narrow and widely-spaced rungs! Inside, the ceiling, carpet, and seats had been removed but wall panels were still intact.  This picture is taken from the nose section, the front of what would have been first class, looking back.  The opening in the floor is the access hatch to the avionics bay.  Looking at the wallpaper, I noticed it is identical to that which was on the Orient Thai 747 that I flew as part of an inaugural test flight from the Don Meuang Airport to the new Suvarnabhumi Airport in July 2006, about two months before the new airport opened.  I wonder if this was the same plane? 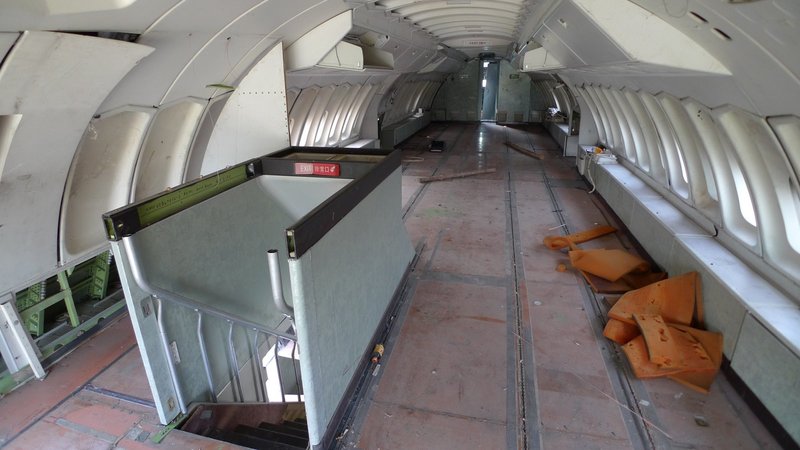 I climbed the stairs to the upper deck.  Used as business class for most airlines, both Japan Air Lines and Orient Thai had put additional economy seats up here. The avionics had been stripped from the cockpit but it was still relatively intact.  The flight engineer’s station on the right-hand side is a clue to the airplane’s age: at least 21.  The last 747 with a three-person cockpit crew was a 747-300 built in September 1990.  Since then, they have been flown by just two people, with computers handling the functions that the flight engineer used to.

After working up a sweat and shooting some 250 pictures and 30 video segments, I finally decided it was time to wrap up and head home.  I felt a bit of nostalgia and melancholy, sorry to see planes that had been so technically sophisticated, and that had flown hundreds of thousands of people around the world, reach the point where their only value was for their scrap.

Edit: Found this link listing the history of all of Orient Thai’s former 747s.  Looks like the plane that is completely scrapped was originally delivered in March 1979 to Japan Airlines and the one with the intact front third was delivered in December 1986, also to Japan Airlines.  From that website I was also able to confirm that, as of this past December at least, the plane I flew on the test flight to Suvarnabhumi is still in operation.