When it comes to Sunday morning bicycle rides, the earlier I start, the better.  Sunday, I was up at six and arrived at the ride site in Minburi just before seven.  Already, the sun was above the horizon and the day was warming up.  There were still some hints of the overnight coolness, though.  Wish I had arrived even earlier.

This ride site is a stretch of expressway that was a built a few years ago as part of a larger project, but was never connected to the other portions.  Other than a handful of local vehicles, the road is used in the mornings primarily by runners, joggers, and families out for a ride with their children.  It also attracts cyclists, often several dozen of them, in their fancy spandex racing gear with their fancy aerodynamic helmets and their expensive road bikes.

I shouldn’t use what could sound like such a derisive tone.  We’re all brothers and sisters in cycling.  Compared to most of these cyclists, though, I’m decidedly down-market.  My spandex is hidden under a pair of cargo shorts, my helmet is functional, not aerodynamic, and my bicycle is a clunky hybrid.  There are no potholes or rough patches of pavement that I fear! 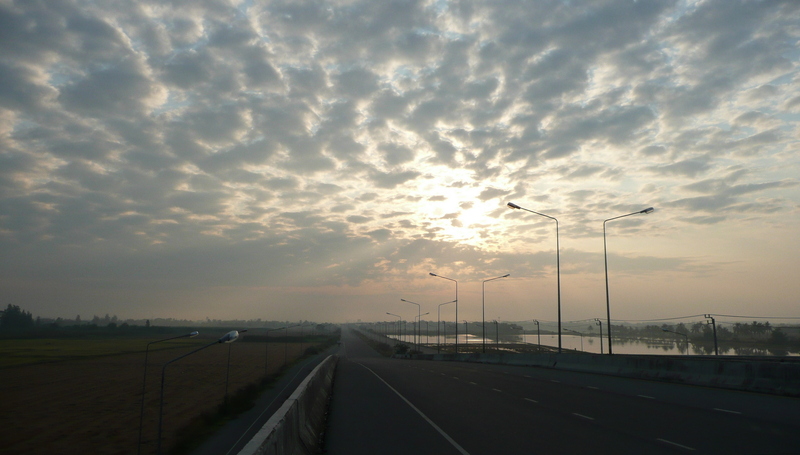 Anyhow, Sunday I was out there earlier than most of the other cyclists and had the road pretty much to myself.  The first stretch is actually a narrow side road that connects the airport expressway’s frontage road to this new stretch of expressway.  It is a country road with small khlongs on either side (shades of Sukhumvit fifty years ago), a few small manufacturing businesses, and the occasional restaurant.  Locals are up yearly, fishing in the khlongs.  A tractor is preparing a rice paddy for planting.  Someone is picking a bunch of bananas from a roadside tree.

Along this narrow street that lies under the approach path to the new airport, two small housing estates are being built.  Both look like they’ll be targeted at the entry level home owners what can afford maybe at most a half-million baht for two bedrooms and no land.  I’ll take more pictures as the development continues.  It fills my heart with a little sadness to see another rural area being developed, rice paddies traded for cookie cutter houses.

The stretch of expressway I ride is about four kilometers long and bridges two other khlongs.  Both bridges are built up with earth like highway overpasses in the US, affording nice views of the surrounding countryside.  Early morning along the khlong you see more of the fishing-cooking-harvesting activities as people rise with the sun and have families to feed and work to do.

One of the stranger sites I’ve seen was captured in the photo, below.  Next to one of the bridges is an open field, quite a large one.  In the field there was a baby elephant wandering around, grazing.  I’ve never seen an elephant out here and it certainly isn’t native to Minburi.  Many times, the mahouts who are the elephants’ caretakers bring them into the city because there is no work elsewhere.  Even though it is illegal, they bring the elephants right into the tourist sections of town, selling people the opportunity to feed the elephants and pose for pictures.

Perhaps this is where the mahout and his elephant are living.  I didn’t see any fences or restraints, but perhaps elephants aren’t prone to making a break for their freedom.  As I passed the field each time, I looked at the elephant as she wandered about.  Finally, she settled down for a nap in the tall grass.  Can you spot her? 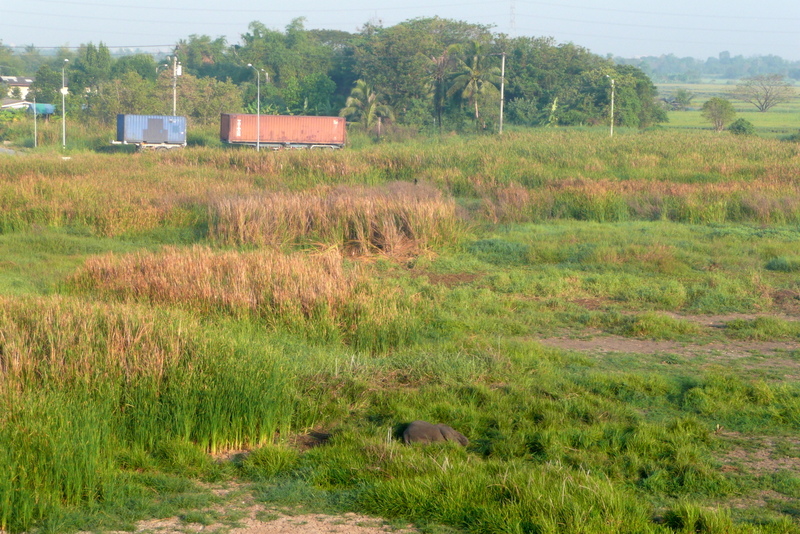 Speaking of development, if I had panned about thirty degrees to the right and taken another picture, you would see a forest of mid-rise condo projects, all about eight stories tall, built about one kilometer away.  If I had to guess, there are probably about two thousand units, all of which have sprung up in the past three or four years.