When we last left our hero, he was galavanting around Kansas City after writing a non-chronological entry about ramen soup noodles in San Mateo.  After my colleagues left KC, I was able to properly focus on my holidays, spending time with family and friends and just enjoying a different setting and schedule than usual.

One evening, I met up with Jack.  He’s a Thai expat now living in the Kansas City area and we connected through airliners.net.  Recently, he bought a 70-year old house in the Waldo neighborhood, a funky little area south of the Country Club Plaza.  This was my first chance to see his new home, a typical two-story cookie cutter that has four small bedrooms on the second story, all sharing one bathroom!

Since there are just two of them living in the house, the single upstairs bathroom is hardly a problem.  And, liking clothes every bit as much as Tawn, Jack wisely converted one of the bedrooms into a walk-in closet, below. 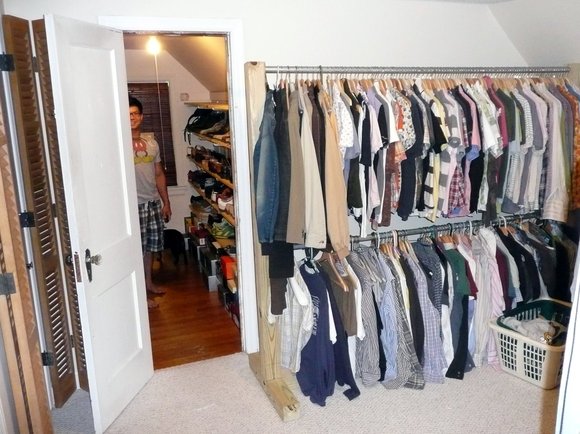 Of course, the “closet” has two of its own closets.  There is a small one to the left (which you can’t see in the above picture), which holds the off-season clothes.  Then there is the dormer attic space, which Jack uses as a shoe closet, below.  I had to take pictures because I know that if we had the space, Tawn would love something like this. 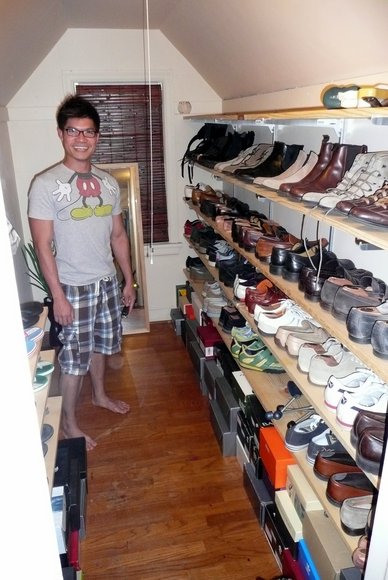 We’ve talked about buying the 32-square meter (330 square foot) studio condo next to ours, tearing a door into the wall between the unites, and turning the whole thing into a closet for Tawn.

After showing off his house and introducing me to his pair of very outgoing cats, Jack suggested we head to the aforementioned Country Club Plaza.  The Plaza, the first shopping center in the world to be designed specifically for people arriving by car, is a landmark of Kansas City and really is one of the nicer outdoor shopping developments in the US.  While you are seeing these kind of developments more commonly these days, you have to remember that the origins of the Plaza date back to 1907 and it opened in 1923, years before malls and other shopping centers.

The architectural style is very much based on a Spanish/Moorish motif.  There is beautiful tile work and many fountains and while those on the coasts may scoff at “flyover country”, the Plaza is a good example of what makes the quality of living in Kansas City quite decent.

Here are some photos, taken later in the day so apologies for the long shadows: 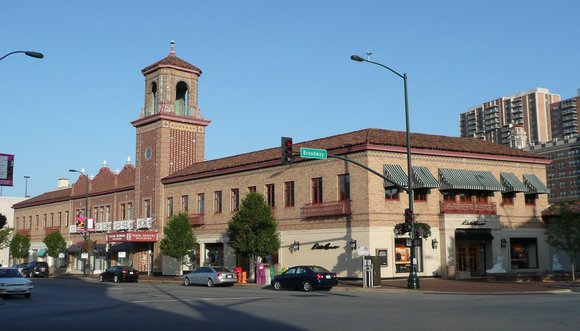 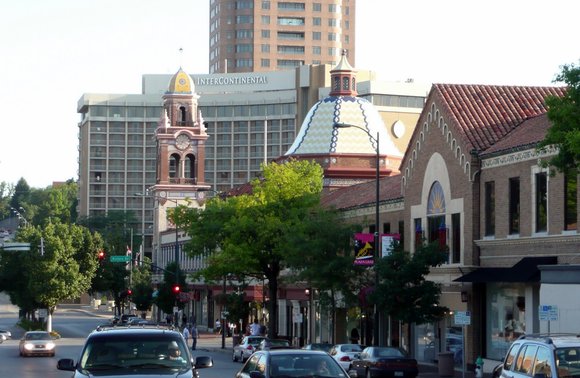 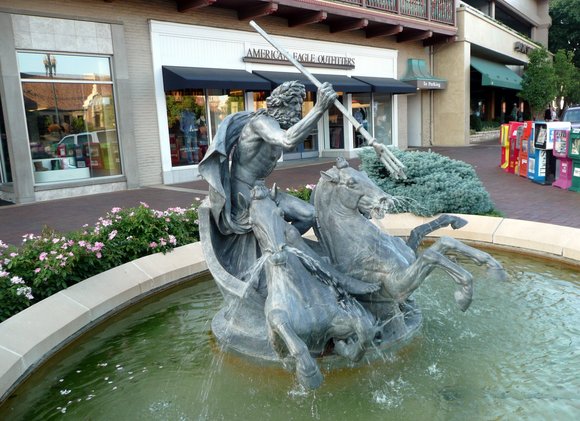 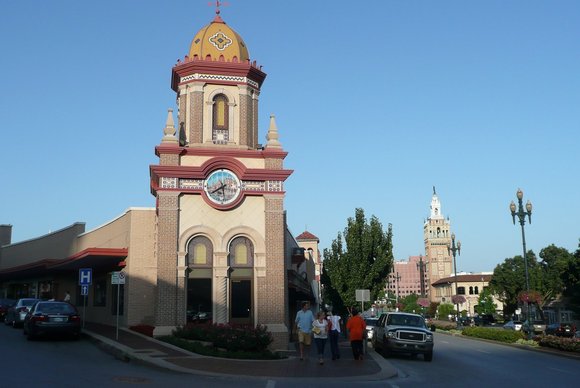 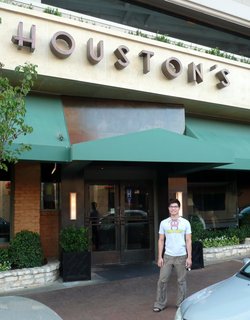 Jack and I ended up eating at Houston’s, one of my favorite chain restaurants.  I had one thing on my mind: steak.

Steaks are expensive and imported here in Thailand, and Kansas City is cattle country so I wasn’t about to pass up the opportunity to try a good steak.  Houston’s delivered with a very nicely marbled rib-eye, tender and flavorful.  Combine that with their excellent cous cous and a glass of very nice cabernet, and it was a pleasant meal.

The only thing Houston’s lacks is proper dessert choices.  There are only two items: the key lime pie and the apple walnut cobbler.  The pie isn’t all that great, in my opinion, and they were out of the cobbler, which actually is worth ordering.  Of course, most of the time I haven’t enough room for dessert after having eaten there, so that’s okay.

After dinner, we walked around the Plaza for a while, visiting.  The weather was a little cooler than normal, still in the low 80s, but just ideal for a summer evening.  Wish that Tawn could have been there to enjoy his Houston’s favorite (knife-and-fork ribs) as well as the good conversation.

Tuesday morning I was tasked with taking Emily to swim lessons so Jenn could get some things done and have a little time without youngsters around the house.  The morning started oddly cool, breezy and humid, the chance of rain lending a pronounced “fullness” to the air.  Jenn decided to try and get the lawn mowed and no sooner had she started then the first big drops started to fall.  But they remained very intermittent, so she powered on, moving so fast that she was no more than a blur in the photo below. 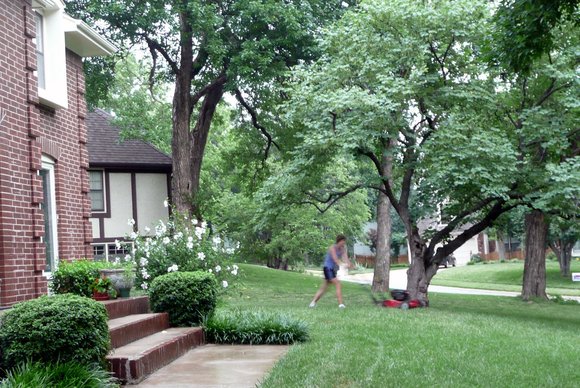 Emily and I were unsure whether the weather would force a cancelation of lessons.  I called the pool’s recorded line and the last weather alert was for a month ago, so we went with the assumption that lessons were on.  I grabbed an umbrella and a magazine and we loaded into the minivan.

We must have arrived very early – ten minutes before class didn’t seem early to me – as there were no other students around.  Emily assured me that this was normal and an instructor, a young lady in her late teens, told me that class was still on.  Unsure of where I was supposed to go, Emily told me to sit in the waiting area and she headed out to find her teacher.

Below, Emily jumps up and down, trying to make it difficult for me to get a good picture. 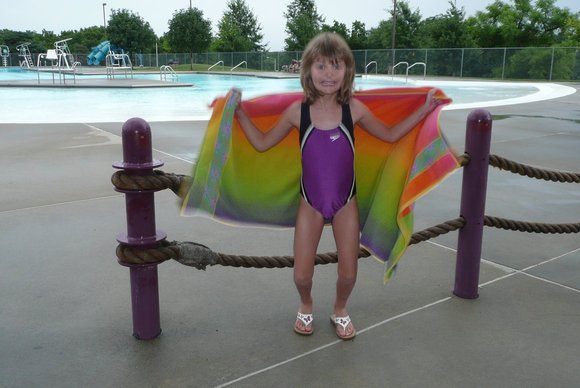 Sure enough, about sixty seconds before lesson time a fleet of minivans arrived, divulging several dozen young swimmers.  The mothers, a veritable cast of Desperate Housewives, brought their folding chairs and novels and set up shop.  Some read (the lady in front of me was reading Michael Pollan’s excellent The Omnivore’s Dilemma) while most gossiped.  You would be shocked with what’s going on amongst neighbors in suburban Kansas City!

Since it was raining, the instructors decided it was Safety Day.  This is the day when the children at each level learn various safety skills.  In the picture below, you can see Emily holding the safety flotation device, about to throw it to “save” one of her classmates. 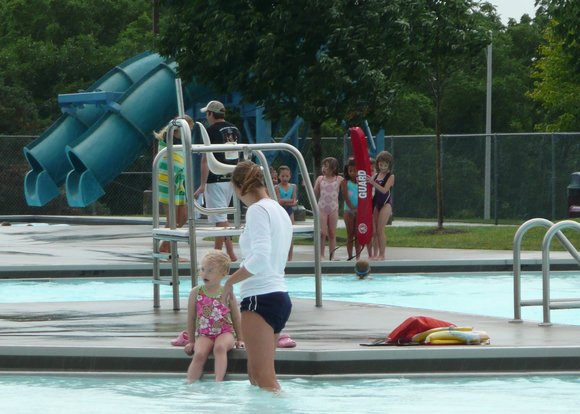 To avoid distractions, the adults were forced to sit in a confined area away from their children, so I had to use the telephoto feature on my camera.  Not too bad, actually, considering how far away I was.

It was a really cool morning and I had on my sweatshirt and was still shivering.  The pool is in an exposed area and the wind blew sharply across the deck.  When Emily finished lessons she was quite chilly, too, so we decided a stop at the neighborhood Starbucks for some hot cocoa would be a good idea.

That afternoon we had BLTs for lunch.  Bacon, lettuce and tomato – what a perfect combination.  I should have this in Thailand as all three ingredients are available.  But the tomatoes here are just not the same.  We don’t do beefsteak tomatoes.

Many insist that mayonnaise is the correct condiment, although I prefer peanut butter.  Everything is better with peanut butter.  Well, not scrambled eggs, but most things. 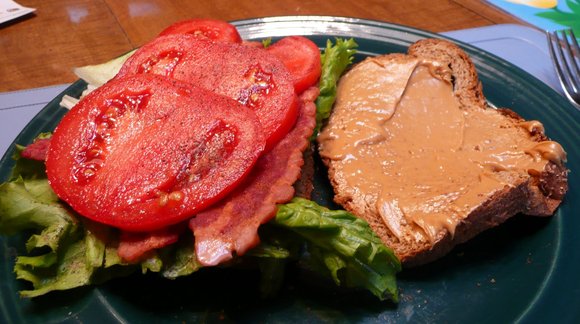 I spent a fair amount of time my final few days in KC working on a photo scanning project.  My grandmother made the effort several years ago to organize their thousands of photos into binders, usually by child.  Many of the photos have names, dates and locations, which is a good start.

A few years ago, I decided to start scanning these photos and collecting them digitally.  Then I can post them to the family and ask people to add more details: stories and memories that will bring the photos to life.  Eventually, I’d like to create and print photo albums for the various grandchildren and, eventually, great-grandchildren like Emily and Ava.

During this week, I managed to scan and document about four hundred photos, just a scratch in the surface.  Future trips will have to include more scanning, so I know what I’ll be doing this Christmas.

In a future post, I’ll include some of those family photos, to see if you can trace any family resemblances. 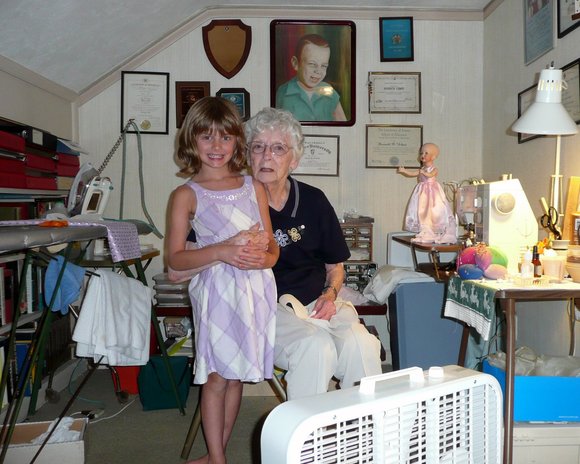 After one day of scanning, Jennifer and Emily stopped by to pick my up at my grandparents’ house.  While there, Emily went upstairs to check on the progress of my grandmother’s sewing projects.  Among other things, she wanted to take measurements to make a dress for Emily.  Amazing that my grandmother is still working on projects like this at her age.  But then, both my grandparents keep incredibly busy.  They have more on their schedules than I do! 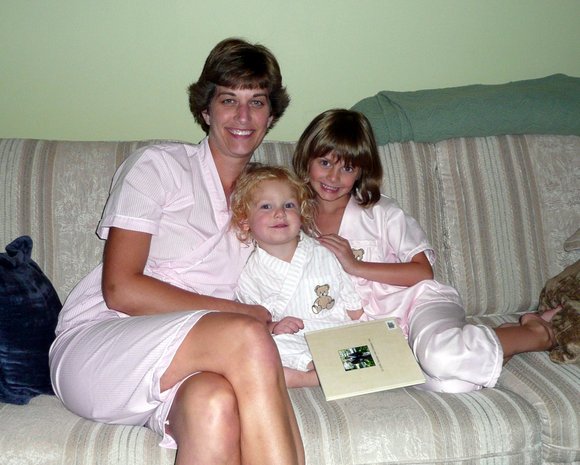 Finally, on one of my final evenings in Kansas City, Jenn, Emily and Ava tried on the matching pink pajamas that Tawn bought for them.  There was an evening of peace and calm as we read bedtime books together, no fussing, crying, or tumult.  What a perfect evening!

While I was backing up my laptop to two external hard drives, I sat down and caught up on the eight days of Xanga subscriptions I haven’t read.  Glad to say, I’m now up to date with what everyone has been up to.  This process, though, took me three hours.  Thank goodness for jet lag and waking up at 5:00.

I’ll pick up my entries back in Kansas City, where I left off, in just a moment.  First, though, I do want to share with you a link that Toronto-based Chrispycrunch recommended.  Kari in Orange County, at age 32, wrote a very thoughtful blog entry titled “Things I wish I had known in my 20s“.

After reading it, I couldn’t think of anything else I wish I had known.  Pretty insightful for a 32-year old youngster.  Would encourage those of you over thirty to read it and see what other advice you would add to the list.  For those of you who are still in your twenties, read it and learn!

Arrived home very early Wednesday morning and have been struggling to get unpacked, caught up with work, and over both my jet lag and some flu/fever/congestion I picked up while in Los Angeles.  I’ll work on catching up on my blog entries this weekend, but in the meantime, here’s an audio blog entry:

Taking a step backwards to San Francisco, I forgot to write about my dinner with Ryan and Sabrina (below), who took me to their local ramen noodle shop in San Mateo.  The place is called Santa Ramen and it is really, really popular.  A review at Rameniac, a site devoted to reviewing ramen restaurants, compares it to “the prettiest girl in your 8th grade class who’s actually only a 6, [but] she’s a 10 to you because hey, that’s all you’ve known these few, queasy years.”

Nonetheless, we enjoyed it a great deal.  The restaurant is a small space in a strip mall on El Camino Real just off highway 92.  It is busy from when it opens at five until well into the evening.  Lots of people show up early for their house specialty, the stewed pork or buta kakuni.  Sadly, they always sell out quickly. 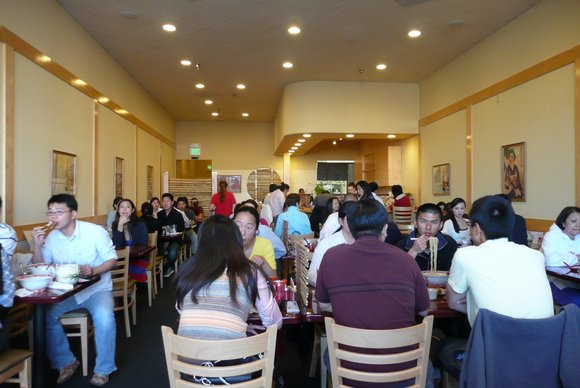 Despite the review from Rameniac, I thought it was really tasty.  Between the three of us we tried a range of types: miso based, pork based, and soy based.  Sadly, I didn’t take notes on exactly what we ordered.  Here are some pictures: 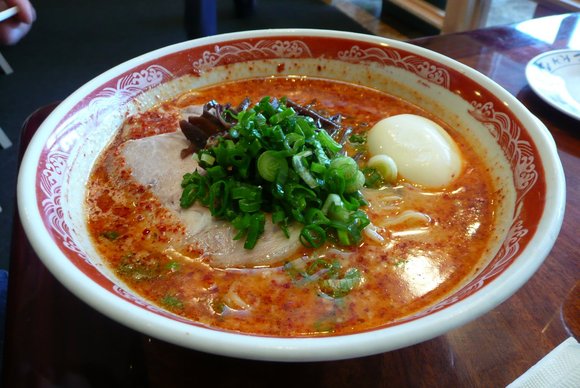 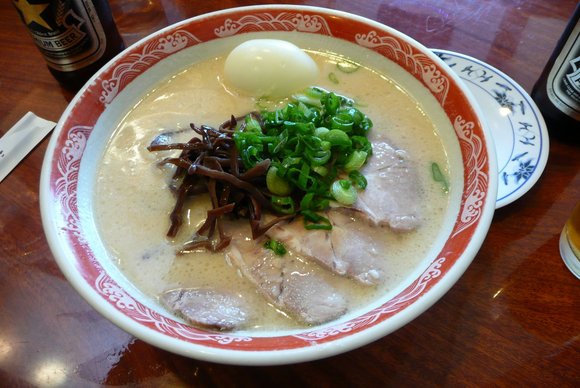 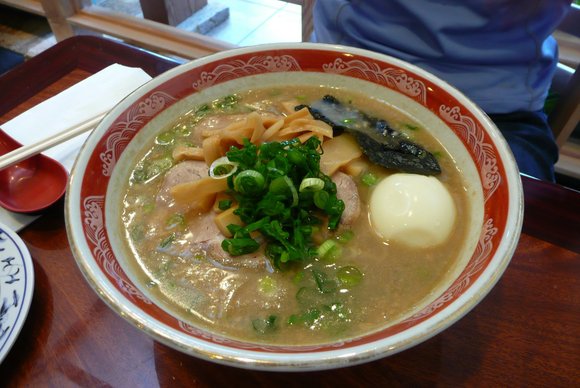 I had the middle one, which was a miso base with barbecue pork.  Yummy!

Oh, and I took the train down the peninsula! CalTrain now runs a “baby bullet” service that goes from SF Townsend Station to San Mateo non-stop.  Shaves about 20 minutes off the time. 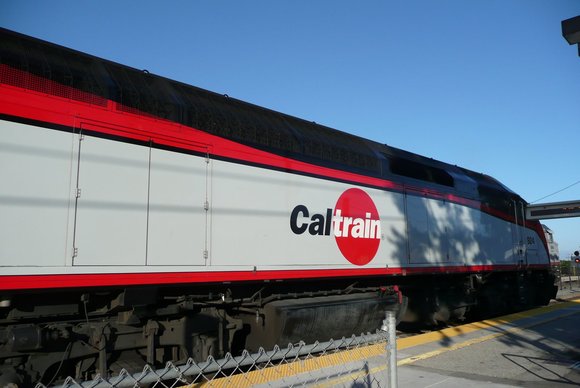