The most important thing for you to know is that neither of the pictures in this entry were doctored.  One of Tawn’s heroes is – no surprise here – Martha Stewart, the domestic diva who has empowered women around the globe (and many men, too) to rediscover the joy of the homemaking arts. 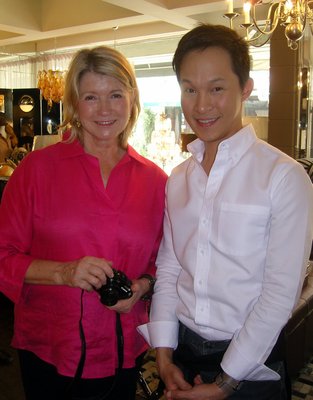 In an object lesson for the theory that it is all about who you know, Tawn had the opportunity to meet Martha.  His friend Ble (pronounced “bun”), a fairly well known Thai interior designer and decorator who designed our condo, has a trio of stores in the mid-Sukhumvit area, Eligible, Incredible and Irresistible.  Tori Burch, a fashion designer, has shopped at Ble’s stores many times and when Tori’s friend Martha came to Phuket for the holidays, Tori told her about these fabulous stores she must come see.

Martha’s hosts, the family whose company owns the rights to distribute the Martha Stewart Living line in Southeast Asia, contacted Ble, who has done design work for their stores here in Bangkok, and arranged for Martha to come visit his shops.

Ble contacted Tawn for some PR and hosting suggestions so that Martha and her assistant would be comfortable but not overwhelmed when they came to shop.  Tawn brought one of our our tea sets and several boxes of Mariage Fréres teas that he purchased on his last trip to Paris.

Sure enough, Martha was impressed with Tawn’s tea service.  After Tawn offered tea to her, she looked over the set and after tasting the tea and commenting how nice it was, she and Tawn had a brief conversation about where he had acquired the tea.  “Mariage Fréres,” she said, “How charming.”

While she shopped, Martha and her assistant took notes and pictures and she mentioned that she would write about this visit on her blog.  Perhaps she’ll even mention the handsome man who served her a proper cup of tea.  It’s a good thing. 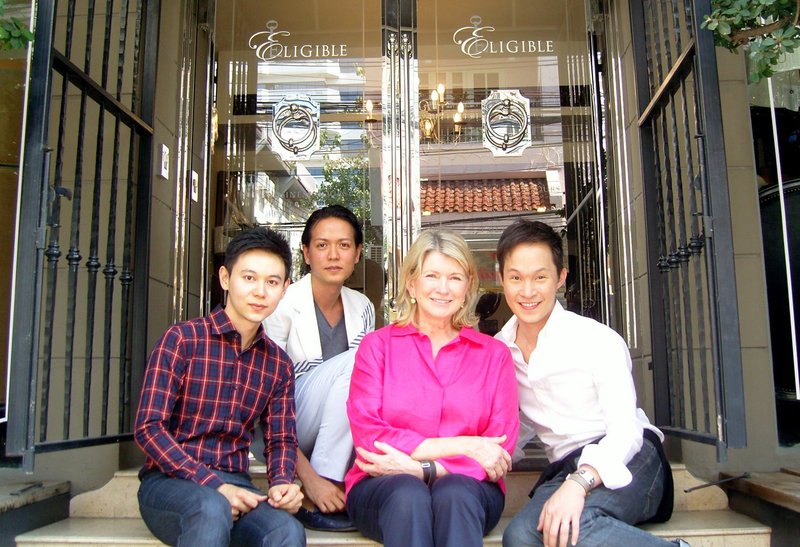 From left to right, Eddy, Ble, Martha and Tawn.  She looks a little apprehensive with that body language, doesn’t she?  As if she’s never been surrounded by gay men before.  Pish-posh!  Anyone notice what Tawn and Martha have in common?

Needless to say, our tenth anniversary couldn’t have been better celebrated than with this visit from someone whom we both highly respect.