Last Sunday we had four couples over for brunch. It had been about two months since I last had guests over and was missing the sounds of a full house. Normally, because of our small dining table, we limit guests to four. However, you don’t get the opportunities to introduce groups of friends who have never met when you have so few guests, so I invited a larger crowd.

In a moment of OCD, I actually printed the menu and tied it above the kitchen counter so guests could see what they were serving themselves. (Buffet style service today.) To save your eyesight, here’s the menu:

Main counter with the parfait bar, crostini, muffins, and tarts from left to right.

Second counter with the quinoa and chickpea salad and baked egg dishes. I had originally bought aluminum tins (tacky, I know, but easy clean-up) but didn’t look at the package count so had to cave in and use ramekins anyhow. 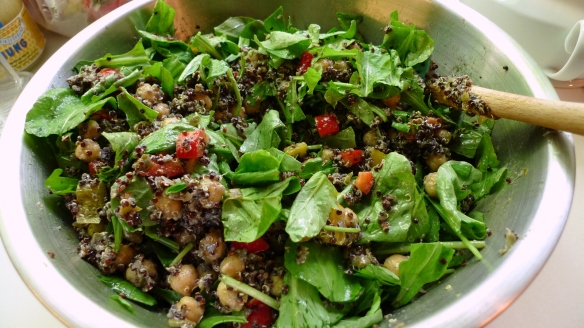 The quinoa and chickpea salad. The market was out of regular tahini so I had to use an organic black sesame spread (think peanut butter made from sesame seeds) which required a lot of lemon juice to overcome the sweetness of the honey in the spread. The result was tasty, though, and very healthful. 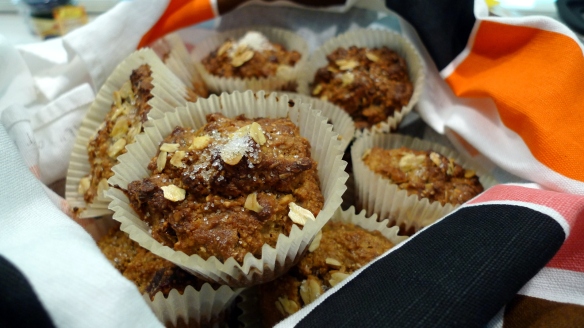 The muffins, although a little stunted, were tasty. With mostly whole wheat flour and lots of toasted oats, they were fairly healthful. Plenty of chopped dates added minerals, nutrients, and fiber. Oh, and a little sprinkle of sugar on top? Well, who can resist?

One of the two tarts. One of my guests had not so subtly suggested I bake a cherry pie for dessert so I took him up on it. Decided to do a tart, though, so I could use puff pastry from the store. Unfortunately, while it looks impressive, the brand of pastry uses shortening instead of butter so I found it a bit tough. Looks nice, though!

The conversation was wonderful and some friends who had never met each other before finally had a chance to connect. Of course, some who did not know each other, knew of each other. It is a small world here, even smaller when you are in my condo!