In my continued unemployment (well, at least I’m not formally employed full-time), I am assisting my friend Chow with testing recipes for the updated edition of her guidebook to Thailand’s best street food. This involves going out to try different dishes in their original context – i.e. on the street – and then returning to her kitchen to try and recreate the dishes, taking notes for how cooks in other countries can modify or substitute techniques and ingredients as necessary. It is a tough job, but someone has to do it. 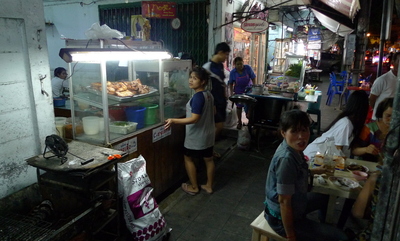 For this group of recipes, we went to a long-established Isaan style street food vendor on Soi Suan Phlu, off Sathorn Road. “Isaan” refers to the northeastern region of Thailand, a dry, poorer portion of the country and also home to a large percentage of the total population. Isaan food is spicy and often uses fermented foods (shrimp paste, fish, chili paste, etc.) to add flavor. While foreigners (and for that matter, many Thais from central Thailand) can find the food a bit too strong, many of the dishes have gained admission to the pantheon of popular Thai cuisine. Chief among these are som tam (green papaya salad), gai yang or moo yang (grilled chicken or pork), and larb (chopped meat and herb salad). 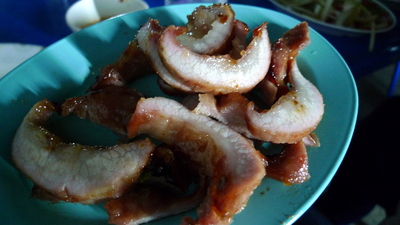 Here is the street vendor’s version of kor muu yang – grilled pork neck. Thai pork is moister and more flavorful than the pork available in the United States, which has been bred to be low-flat and, thus, bland. The neck has plenty of fat and the meat undergoes a quick marinade and then grilling over blazing hot charcoal. Though simple, the flavors are very rewarding to eat. 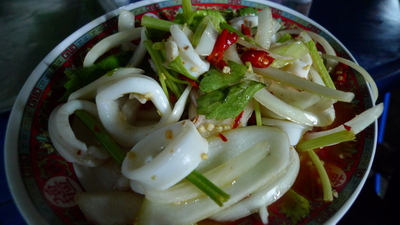 Another dish we tried is the yam plaa muk – squid salad. “Yam” (which means “mix”) refers to a style of salad that originates in Isaan, although of course it wouldn’t originally be served with fresh squid since that region is a long way from the ocean. Regardless of the main ingredients, the dressing always includes shallots or onions, lime juice, fish sauce, sugar (usually palm), and fresh chilies. That’s the holy quartet of Thai cuisine: sour, salty, sweet, and spicy. 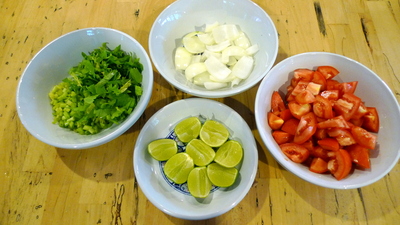 Back at Chow’s kitchen, we tried our hand at yam pla muk. In addition to the fresh squid (it must be fresh or else it will be rubbery), which is cleaned, cut, and boiled very briefly (it must be brief or else it will be rubbery), we added Chinese celery (substitute the leaves and thin ends of regular celery), onion, and tomatoes. Mix all the ingredients in a bowl, along with the sauce ingredients I mentioned in the previous paragraph. 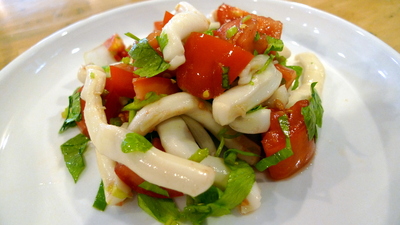 The end result is a refreshing, ceviche-like dish that makes for a perfect summer salad. If you don’t like squid or can’t find any, you could use shrimp or fish, too. You could also use chicken, beef, pork (sliced and cooked), or even pomelo. Lots of options. 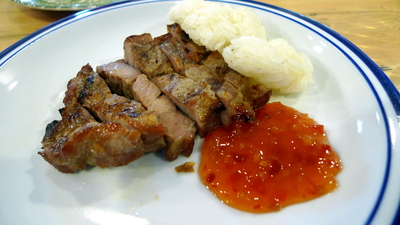 We also tried our hand at muu yang, the grilled pork. Lacking a grill, we seared on a cast iron griddle and then finished the pork beneath the broiler. We were focusing more on the marinade rather than the way the meat was cut and discovered that the marinade recipe will be trickier to figure out than we expected! This will require more experimentation. The red sauce is a bottled sweet chili sauce that is available in most Asian food markets. Served also with some sticky (glutinous) rice, another Isaan staple. 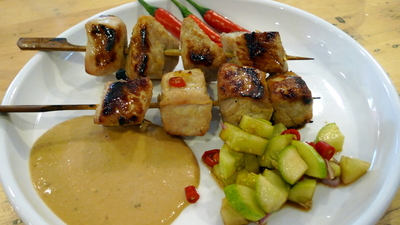 While we were at it, we also tried our hand at satay. Satay are skewers of meat (in this case, pork and chicken) that are marinated, brushed with coconut milk, and grilled. They actually come from southern Thailand by way of Indonesia. We didn’t focus on cutting the meat into thin strips and instead went for chunks. We did make the peanut sauce from scratch. A lot of recipes available to foreigners substitute peanut butter instead of ground peanuts. Yes, you can do that… but it really doesn’t taste the same. Served with cucumbers, shallots, and chilies briefly pickled in a rice wine vinegar and sugar brine.

The experience of cooking with Chow is always fun. For all the years I’ve lived in Thailand, I’m woefully ignorant of how my favorite Thai dishes are made. When there is such inexpensive and tasty street food available, there is little incentive to cook these dishes myself. (Especially since some of the ingredients and cooking processes come with a strong smell. Fermented shrimp paste anyone?)