When I moved to Bangkok more than seven years ago, I flew THAI Airways’ nonstop flight from New York JFK Airport to Bangkok. In the years since, THAI has discontinued both the New York and Los Angeles to Bangkok nonstop flights. In their place is a one-stop flight via Seoul Incheon Airport to Los Angeles. When shopping for tickets for our recent flight to the United States, this Bangkok-Incheon-Los Angeles flight was the cheapest option offered by a Star Alliance carrier.

I’ve edited a nice video that overviews the flight, the cabin, the amenities, and meals served. If you would rather view the pictures and read the story, those follow here:

The flight departs Bangkok’s Suvarnabhumi International Airport at 7:10 am, a bit earlier than ideal. Thankfully, we were packed the day before and made it to bed at a reasonable hour. Still, the 3:00 am alarm came much too early!  The queue at the airport was short and the wait was less than fifteen minutes to check in. There were no lines at either the security screening or immigration counters. 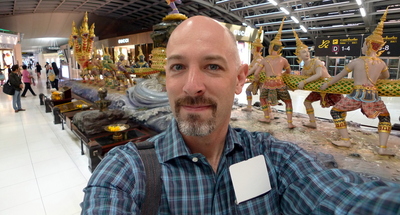 Just past immigration is a large scale sculpture of one of the most famous episodes in Hindu mythology, the samudra manthan or “churning of the milk ocean”. It is an impressive sculpture that illustrates that this mostly Buddhist culture has strong Hindu and Vedic Brahminist roots.

We made our way to one of the many THAI Airways Royal Silk lounges. These lounges offer a nice respite from the stresses of air travel: a quiet ambience, comfortable seating, and a selection of reading materials, food, and beverage.

Since we had departed home so early, I helped myself to a latte, some small pastries, and (something I never eat!) a box of chocolate breakfast cereal. Maybe this is because my mother would never allow us to have so sugary a cereal in the house when I was a child, now I enjoy having a bit every now and then as a special treat.

Our Boeing 777-300 was waiting at the gate as the sun slowly climbed above the hazy horizon. The windows of the terminal were not very clean, making for this poor-quality image. Boarding commenced a few minutes late but the passenger load was only about 60% so boarding did not take long. 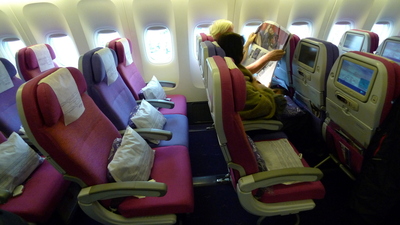 The economy class product is comfortable and modern. The seat maps provided on THAI’s website indicated that certain rows of this plane had 34″ pitch. I brought a small tape measure and samples several rows and found a consistent 32″ pitch. Comfortable enough and an inch more than most US-based carriers, but nothing special. Asiana, Korean, and All-Nippon offer 34″ pitch and EVA offers 33″ pitch as the standard in their long-haul economy class. 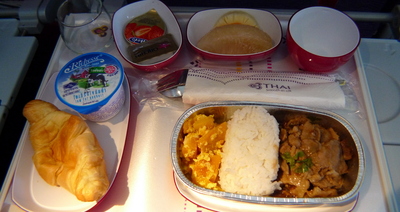 The morning breakfast option was pancakes and sausage or (my choice) stir-fried pork with ginger, rice, and pumpkin and egg. The food was tasty enough, although nothing very special.

About four-and-a-half hours later, we arrived at an overcast Incheon and were soon at the gate and off the plane. The same aircraft would take us to Los Angeles but all passengers were required to disembark so the plane could be serviced and a new crew could board. 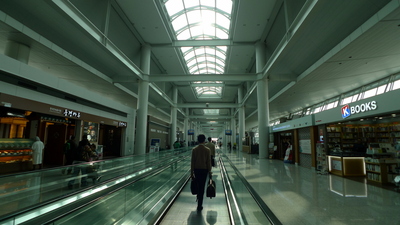 This is my first time transitting Incheon since they opened the new mid-field concourse. It is a bright, sun-lit place with modern architecture. Within a few minutes, we had cleared the security screening and returned to the departure level. 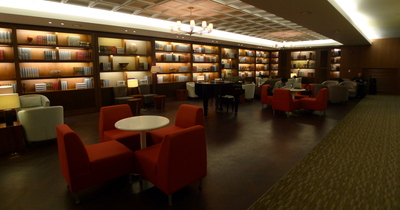 Despite only having about 80 minutes on the ground, we took the time to stop by the Asiana Airlines lounge. As a holder of the United Club card, I have access to Star Alliance member lounges. This is a nice perk for long-haul travel and this new lounge in Incheon is very nice, with a faux library and a baby grand piano. I wonder what would happen if a guest decided to begin playing it?

The selection of food wasn’t very interesting, but I did help myself to some salad and a glass of draft beer. Truth be told, the beef was very hoppy and as I’m not much of a beer drink, I had only a few sips. On our return trip from Los Angeles, we had a slightly longer layover in Incheon and I took the opportunity to use the individual shower rooms to freshen up.

Returning to the gate area in preparation for boarding, I admired the nice combination of steel, wood, and glass. Despite being very modern, the terminal does not feel cold and impersonal, probably because of the wood floors and many plants.

One sore point about flying through Incheon is that there is a pre-boarding security inspection. All liquids must be disposed of, including any bottled water purchased in the terminal. The claim is that this is for US TSA security reasons, but that makes no sense because at Taipei and Tokyo, passengers can bring liquids from inside the terminal aboard US-bound planes. I hope this restriction is lifted soon because not bringing your own water aboard is an inconvenience that does nothing to improve security. 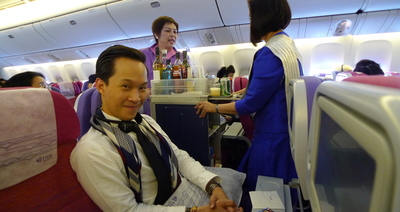 The flight out of Incheon was only about 50% full, leaving lots of space including an empty seat between Tawn and me. There was only one person in the row ahead of us and she sat in the middle seat, so her recline did not affect our leg room. Once airborne for our 10.5-hour flight to Los Angeles, service began with cocktails. Unlike some airlines that have miniature liquor bottles, THAI carries full-size bottles and mixes drinks to order.

Drinks are served with a retro stir stick featuring THAI’s original 1960s logo. I managed to collect several of these between our four flight segments, figuring they will make a nice collection in the future.

Menus were distributed out of Incheon. Interestingly, the menus include information for both the Bangkok-Incheon and Incheon-Los Angeles segments. I am not sure why menus were not handed out as we departed Bangkok. You could argue that there is really no point of menus but I think it is a nice touch that makes the service appear more sophisticated. Certainly, it is nicer to think of your meal as having four courses rather than just being a single tray of food, even if all four courses are in fact delivered on a single tray!

I opted for the Korean style beef bulgogi, which wasn’t as interesting as I was hoping. It was tasty, though. Note that each tray comes with a package of kimchi! The dessert was a raspberry chocolate cream cake and the appetizer was smoked salmon.

The other selection, which Tawn chose, was a pork green curry served with Thai jasmine rice. Curry is an excellent choice for airplane food because at high, dry altitudes, your sense of taste is diminished. Curry has plenty of flavor and remains enjoyable. Notice, too, that the utensils are metal, even the knives. We can’t bring water aboard but are given an admittedly dull metal knife. 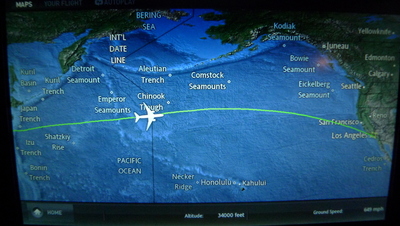 Slightly less than halfway through the flight, we crossed the international date line and jumped back to the start of our day. I dozed only a bit on this flight, instead watching several movies and television programs on the on-demand video service. Gone are the days of sheer boredom on a plane. There are plenty of ways to distract yourself as the hours go by. 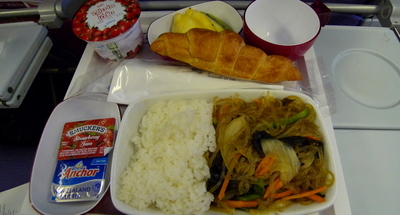 Mid-flight, snacks were available in the form of instant noodles and sandwiches. About two hours before landing, a second full meal service was provided. I opted for the boiled glass noodles (made from mung beans) with sauteed beef tenderloin. Actually, I didn’t find any beef in my serving!

The other option, which Tawn chose, was sauteed yakisoba with chicken teriyaki. Neither of these dishes were that interesting and while quality was fine, the meals weren’t as interesting on these flights as they have been on other recent THAI flights.

It was a beautiful day as we descended into Southern California. Because the passenger load was so light, I moved to a window seat to take in the view when we landed. Rain storms had passed through recently, so the sky was clear and visibility was better than normal.

After landing on runway 24-right on the north side of LAX airport, we taxied the long way around to our gate. This took us past the United Airlines hangar where one of their Boeing 787 aircraft sits, stranded by the FAA’s grounding of these new composite jets in late January. Hopefully, the fleet will be released to fly again soon.

Pulling into our gate at the Tom Bradley International Terminal, we had neighbors from China and Japan. Had the price been right, I would have liked to fly All-Nippon on this trip.

All in all, the THAI flight was a pretty good experience. From departure in Bangkok to arrival in Los Angeles was less than 17 hours, one of the shortest routes between the two cities. Service was good and the flight was reasonably comfortable, given that we were traveling in economy class.