While in Kansas City, we met a friend for lunch at Rye, a restaurant in Johnson County that is an offshoot of the well-regarded bluestem restaurant by award-winning husband and wife team Colby and Megan Garrelts. (My blog entry about a 2009 dinner there.)

Located in a newer retail/residential development near I-435, Rye has a welcoming atmosphere and a menu designed to celebrate Midwestern cuisine. It was busy when we arrived right in the middle of lunchtime, but we were seated after only a ten-minute wait. Service was friendly although, to my taste, a tad overfamiliar.

The restaurant has an extensive list of wines that are available in 6-ounce, 8-ounce, and 24-ounce servings, which translates into quarter, third, and whole bottles. (Which isn’t quite right because a standard 750ml wine bottle is 25.4 ounces.) Confusingly, sometimes it is cheaper to buy a bottle and other times, it is cheaper to buy four 6-ounce servings of the same wine. When I pointed this out to the server, who then introduced me to the person who manages the restaurant’s wine selection, I received a murky explanation that led me to suspect that nobody had ever noticed this pricing discrepancy.

That oddity aside, the wine list is a nice one and they deserve kudos for making more wines available by the glass, which encourages exploration and horizon-broadening.

The menu could be described as rustic but with a bit of panache. It celebrates Midwestern classics – chicken salad, pulled pork sandwich, and dumplings feature on the menu – but presented in a way that is a bit lighter, a bit more seasonal, and a bit more sophisticated than might come from your grandmother’s kitchen. 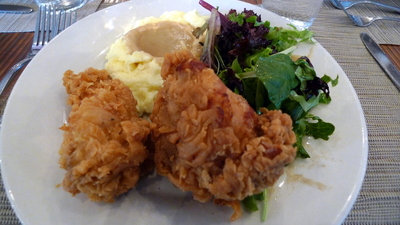 I ordered a two-piece fried chicken plate with a side of mashed potatoes. The breading was crisp and well-seasoned. The chicken inside was juicy but, like a lot of American chicken, the meat wasn’t very flavorful. American chicken (and pork, for that matter) is bred for blandness, much to my sorrow. The potatoes were nice and the mixed greens kept the dish reasonably light. 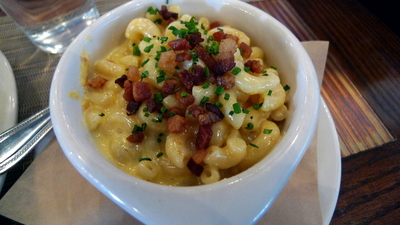 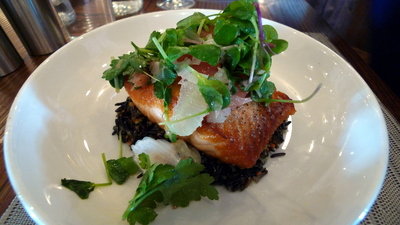 Tawn had a roasted salmon dish served on Indian rice with a lemon dressing and greens. This was a tad more elevated than the “fish and rice” dish you might find as the more healthful option on typical Midwestern menus. The fish tasted like it might be farmed – for the price, that wouldn’t be a surprise – and was a bit drier than I like, although Tawn prefers his fish that way. The lemon dressing was refreshing and the Indian rice was toothsome, although I couldn’t figure out if they were referencing Native American rice or South Asian rice! 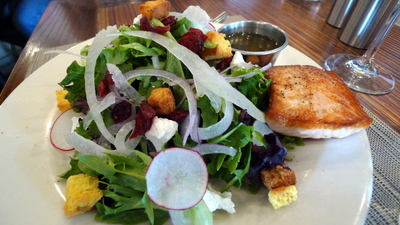 Our friend had the house salad, grilled salmon added, with a sherry vinaigrette. While I didn’t try it, she seemed pleased with the dish. The greens were a nice mixture of types, so it certainly was a step up from a plate of iceberg lettuce. Of course, if a James Beard award-winning chef served a plate of iceberg in anything other than a wedge salad with Maytag dressing, I would be disappointed. 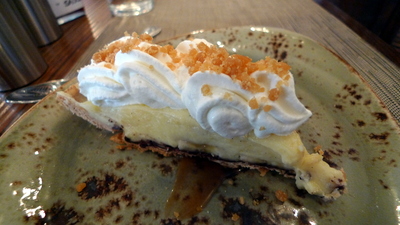 Nearing fullness, we ordered a single slice of pie, banana cream, for dessert. While I love pie, banana isn’t my favorite so I let Tawn do most of the eating. It was a nice enough pie although I found the crust a little tough. The pudding was nicely made, creamy and smooth.

All in all, Rye seems like a decent restaurant, providing familiar food with a slight twist at reasonable prices. While I don’t return to KC very often, I would keep Rye on my list of places to stop for a meal.

0 thoughts on “Lunch at Rye in Kansas City”