While the autumn harvest back in November was meagre – two cherry tomatoes and two radishes – my balcony garden has done somewhat better in the intervening months.  Recently, a handful of larger tomatoes have appeared, my container eggplant plant has been doing well, and I’ve even discovered a batch of small earthworms living in one of the pots. 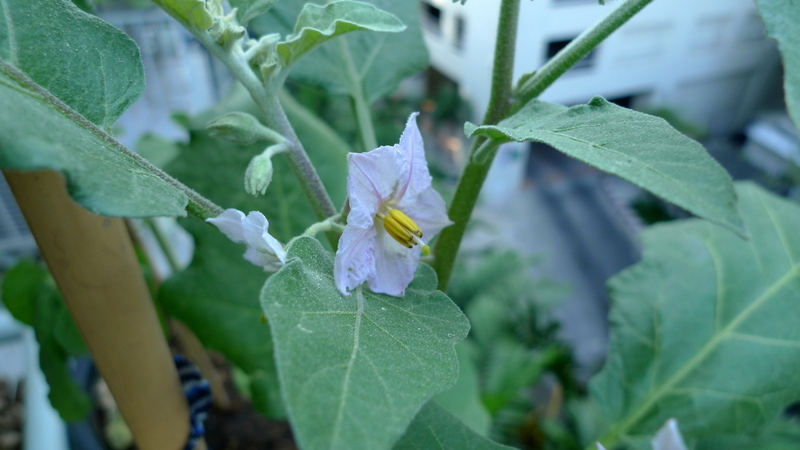 Pretty pale violet blossoms on my container eggplant plant.  Its broad leaves look slightly prehistoric but the tiny bees love the flowers and it has turned out to be the most productive plant in my garden. 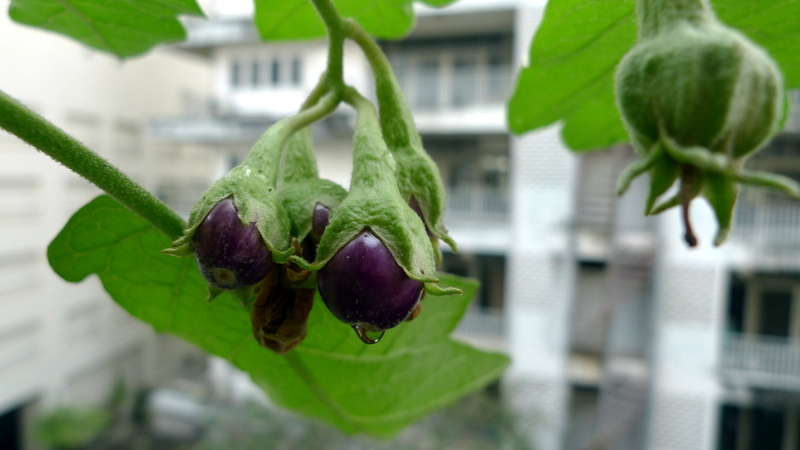 The plant produces these small purple fruit that grow to about the size of a golf ball.  We had some unseasonable rain for several days in January, which didn’t seem to harm the plants, but slowed the ripening of the fruits by a few days. 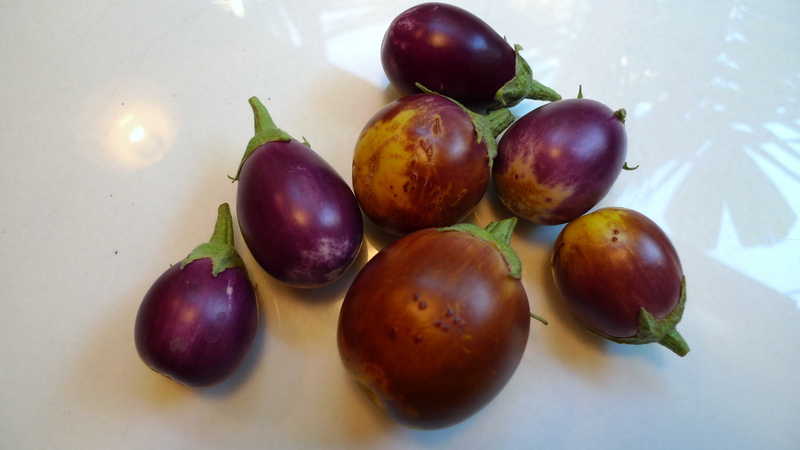 The first harvest of eggplant.  I think a few of them (the yellowish ones) got a little sunburned but they tasted fine.  I used these to make some baba ganoush.  Frankly, miniature eggplants aren’t the most convenient for grilling then scraping out the flesh because there isn’t much flesh left after the grilling is complete! 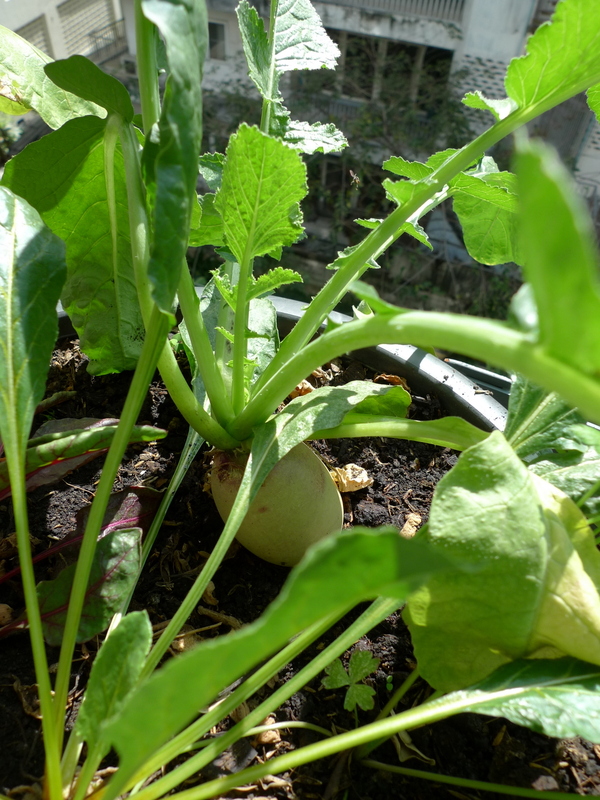 My second watermelon radish grew to a healthy size, much larger than a golf ball though not nearly so large as a tennis ball.  Interestingly, instead of pushing down into the dirt it pushed itself up, keeping a long trailing root.  Proof that my soil has too much clay in it and needs more work. 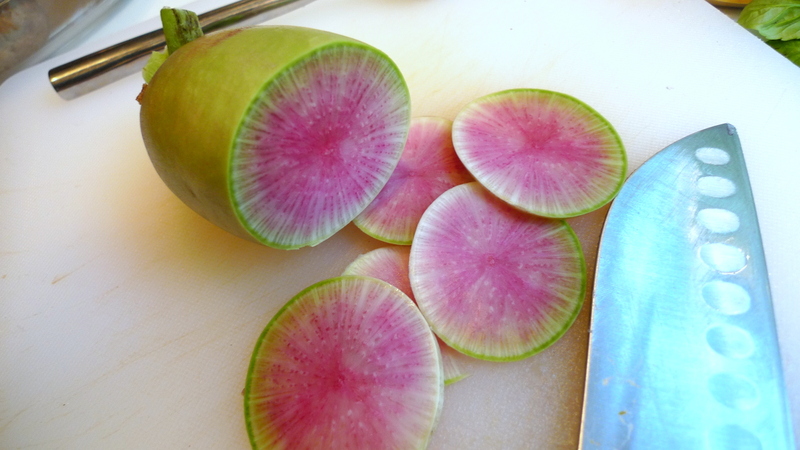 Cutting this radish, I got a good look at the unique coloring.  Whereas my first radish (yeah, I only grew two – root vegetables take up too much space) had a pale pink exterior, this one looked more like the picture on the cover of the seed package.  By letting the radish grow so large, it developed a pretty sharp taste, but I actually like that. 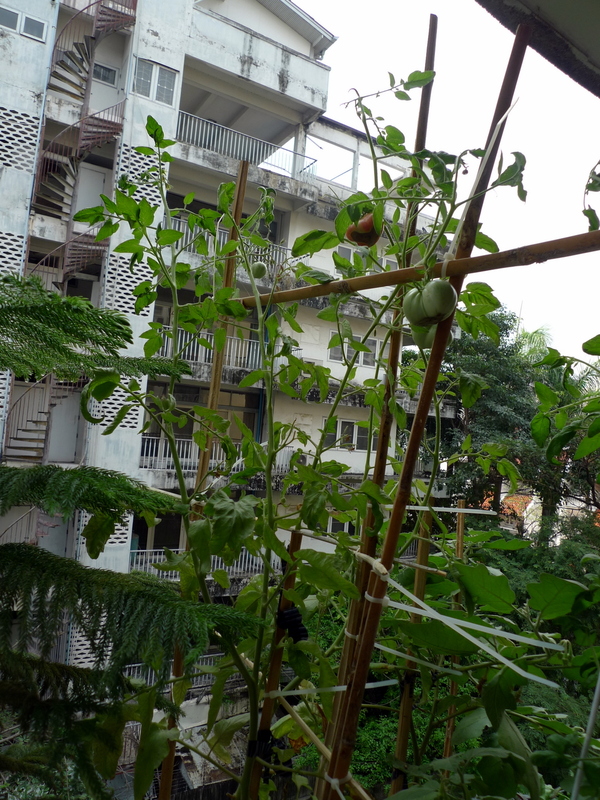 While my first tomato plant never produced more than two cherry tomatoes, the two remaining plants, both of the Chianti variety, were a bit more productive.  They required some creative support since the gardening shops have been out of proper tomato cages ever since the floods a few months ago.  Despite the ad hoc support system, there are five or six fruits that finally set.  We never really had enough of the cooler nighttime temperatures that help the polinated blossoms to set. 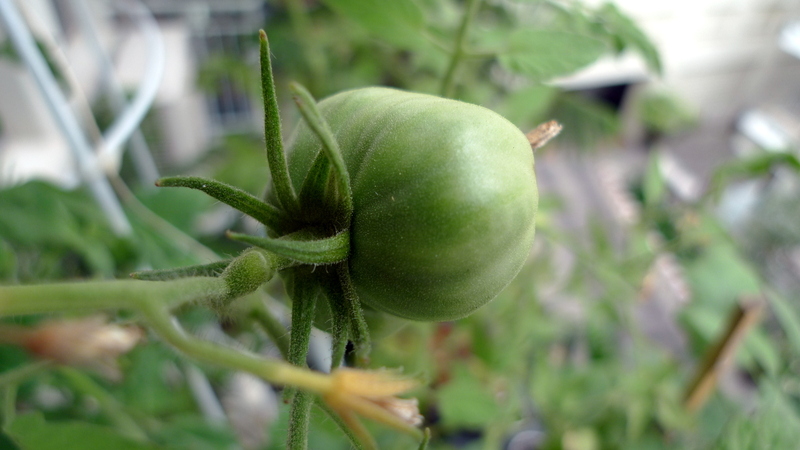 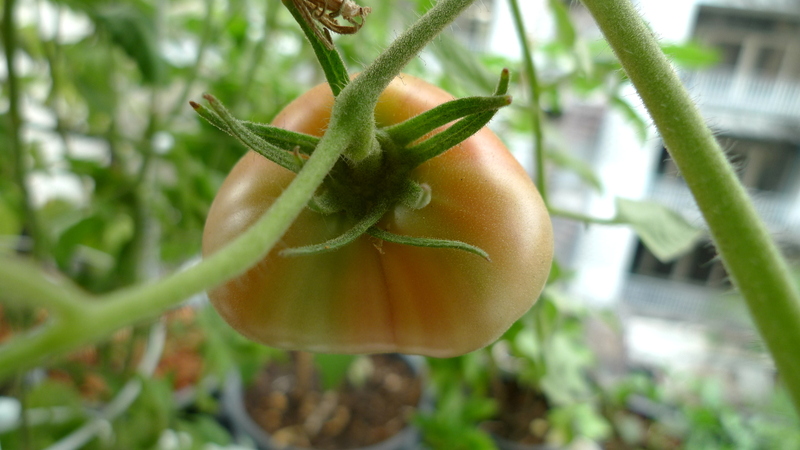 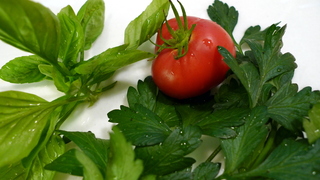 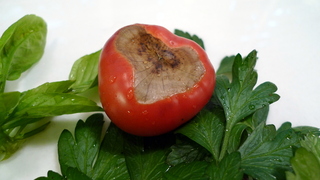 The fruit size is relatively small – just a bit smaller than a tennis ball – and there is some blossom rot on the bottom caused by my watering habits.  I’ve learned that it is better to give tomatoes a really good soaking every second or third day rather than giving them a moderate watering every day.  The first of the tomatoes already ripened and the edible parts were really sweet, dark red, and juicy.  These two plants will be finished after these fruits are ripe but I have another plant about eight inches tall and hopefully I can have some better luck with it over the next few months. 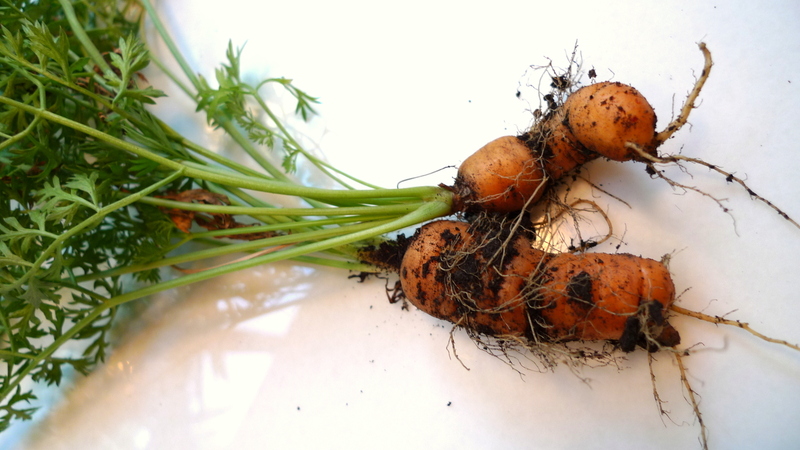 I also harvested two of the half-dozen carrots I’ve been crowing.  These were a petite French variety and you can again see the effect of too much clay in the soil: very misshapen carrots.  I cleaned them up and put them on a salad, though, and they tasted nice.  Again, root veggies just don’t make a lot of sense in a balcony garden.  Vertical plants are much more efficient.

The last bit of good news from my garden: after pulling out the original cherry tomato plant, I was ammending the soil and discovered dozens of small (inch-long) earthworms.  Don’t know where they came from but I hope they continue to breed.  I transferred many of them to two spare sacks of soil and compost, added some vegetable scraps from my kitchen, and hope they will work over the next several months to help give me better quality soil.

Who knew finding worms could be so exciting?