Well, I’m back and reasonably well recovered.  Recovered enough, at least, to start sharing the story of our trip to Kaua’i.  First part of the story, our flight from Bangkok to Hong Kong.  This may be a bit more detailed than you are interested in, but I’m going to cross-post it as a trip report on Airliners.net.  I hope you enjoy.

The alarm rang too early, but since the first leg of our four-flight trip from Bangkok to Lihue, Hawai’i departed at 6:30 am, perhaps that was inevitable.  A quick shower, a double check of critical documents and must-bring items, and a few minutes to whip up some sandwiches to eat onboard later, and Tawn and I were headed downstairs for the waiting taxi.

As we walked across the condominium driveway, a small toad hopped into the bushes, startled by our approach.  On the 25-minute ride to the airport, the taxi driver pandered to us, selecting English songs from his MP3 player.  “YMCA” by the Village People, “Can’t Touch This” by MC Hammer, and “Ice, Ice, Baby” by Vanilla Ice were among the selections.  “Do you really like these songs?” I asked the driver in Thai.  “Of course,” he responded with all seriousness.  “Don’t you?”

Air Asia’s ticket counter was its usual early morning chaos, although once we pushed through the masses of infrequent travelers, we found the online check-in queues had only a few people waiting in them.  After our bags were tagged and our travel documents checked, we headed for immigration. 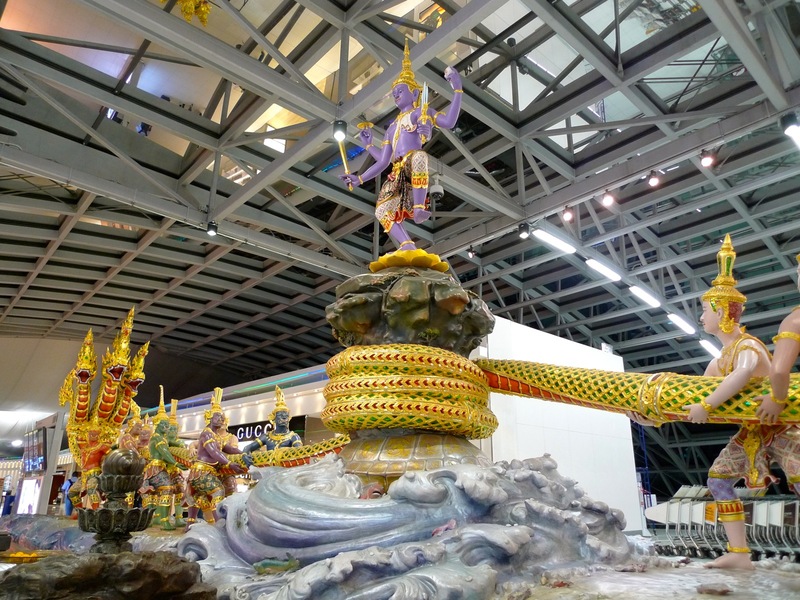 As of late, lots of letters to the editor of the English-language Bangkok Post newspaper have been inspired by complaints of the long queues at Suvarnabhumi Airport’s immigration counters.  However, at 4:50 this morning, lines were about ten people deep and it only took a few minutes to clear immigration.

Just beyond immigration is this epic sculpture taken from Hindu mythology of “The churning of the Ocean of Milk.”  More about that story here. 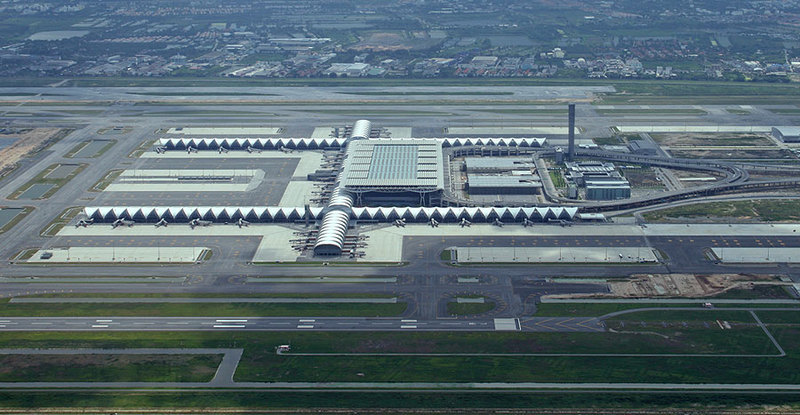 After a latte and some duty free browsing, we headed to our gate.  The airport is laid out in the shape of a massive letter “H” and our gate was at the far end of the upper right leg.  We had checked in close to the near end of the main terminal in the center of the “H”, so it was a bit of a walk. 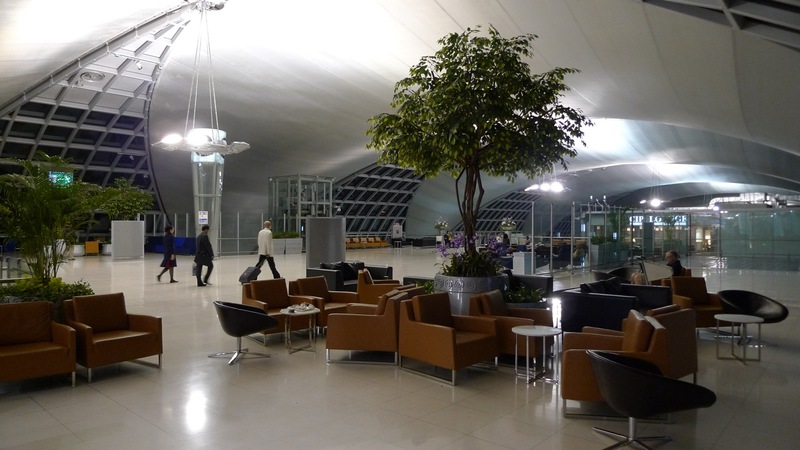 A lonely, dimly-lit pier stretched out ahead of us as we traversed one moving sidewalk after another.  The airport authority has made some attempts to warm the interior and make it more welcoming, especially in a well-publicized desire to rank as one of the top five airports in the world.  This jealousy of peer airports such as Singapore, Hong Kong, and Seoul should be a good motivator, but unfortunately the airport authority is run by people who either know little about airports or else pay little attention when visiting the competition.  Compare the above photo with one later on from Hong Kong to see a night and day difference. 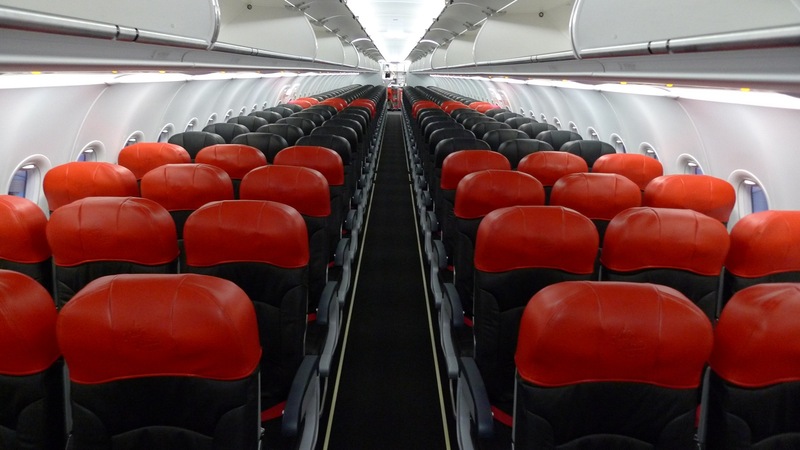 Boarding began about 6:00, an orderly affair.  We had purchased “hot seats” – designated as the first five rows and the two emergency exit rows – for an extra 250 baht (about US$ 8.50) per segment, per person.  This gets you priority boarding and, in the exit rows, a smidgen more leg room and a fixed (not reclinable) seat in front of you. 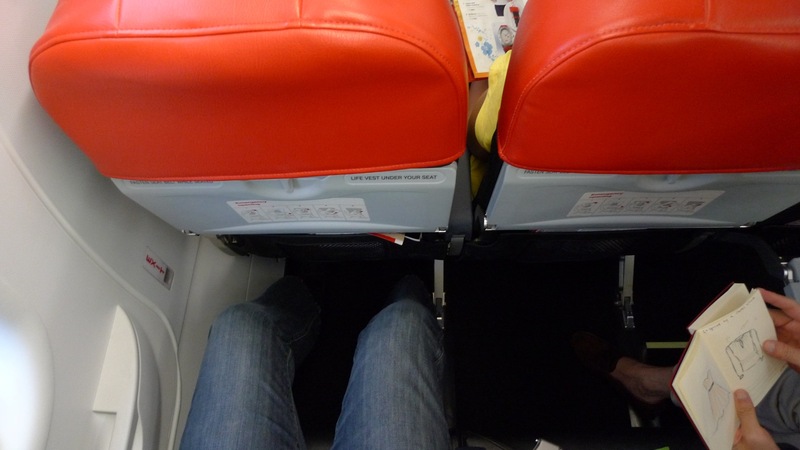 A look at the leg room in the exit row.  About 36 inches, which is 3-5 more inches than you get in most American economy class seats.  In a three-seat row, we reserved the window and aisle seats, betting correctly that few people would choose to upgrade to a middle “hot seat”, thus effectively getting us three seats for the price of two.  If someone did come along with that seat, we could always offer them the window or the aisle instead so we can still sit together. 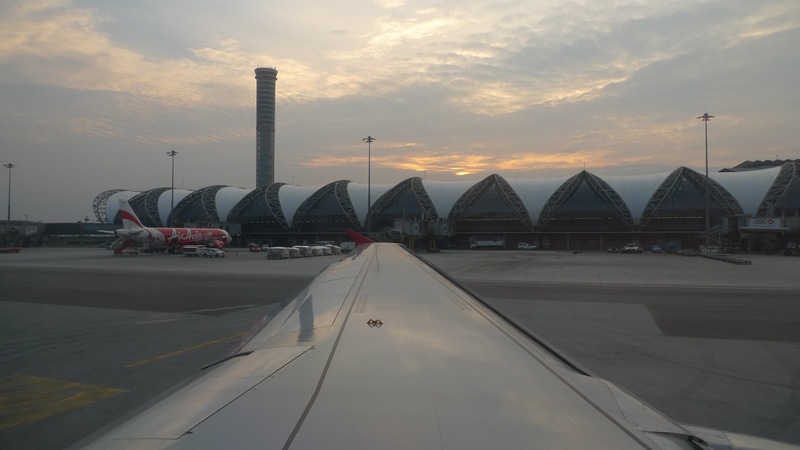 This flight was operated by Thai Air Asia, one of four subsidiary companies that together make up “Air Asia”.  The fleet is completely made up of new Airbus A320 aircraft.  The interior was clean and the black leather seats look sharp.  Flight attendants are friendly and attentive and seem very capable.

As the sun rose over Suvarnabhumi, a final passenger count was done and the main cabin door was closed for an on-time departure. 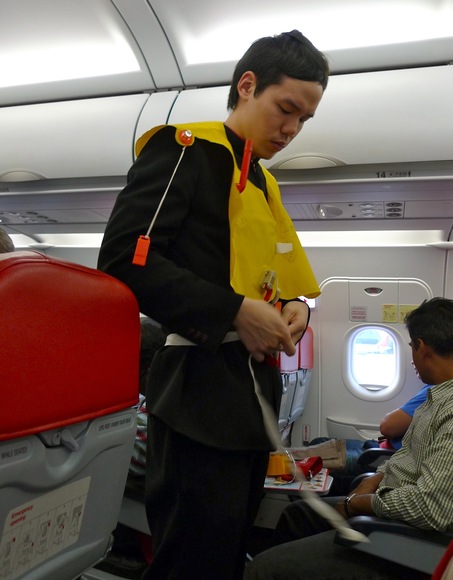 After a quick safety demo in Thai and English, we taxied to runway 1-Left and since there was no other traffic at this early hour, we started our takeoff roll just ten minutes after scheduled departure time, climbing through the hazy skies of Central Thailand en route to Hong Kong. 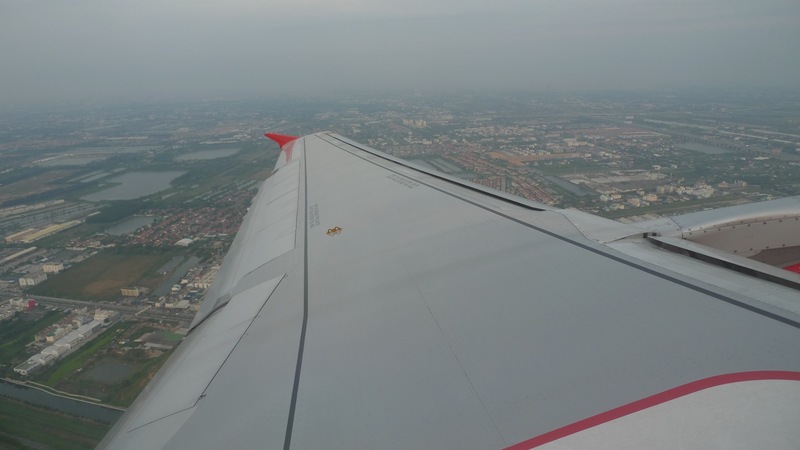 Housing developments on the eastern edge of Bangkok, as seen on departure from the airport.  The main part of the city is in the haze on the horizon.

Above, a two-minute video of the takeoff from Bangkok and landing in Hong Kong, if you are interested. 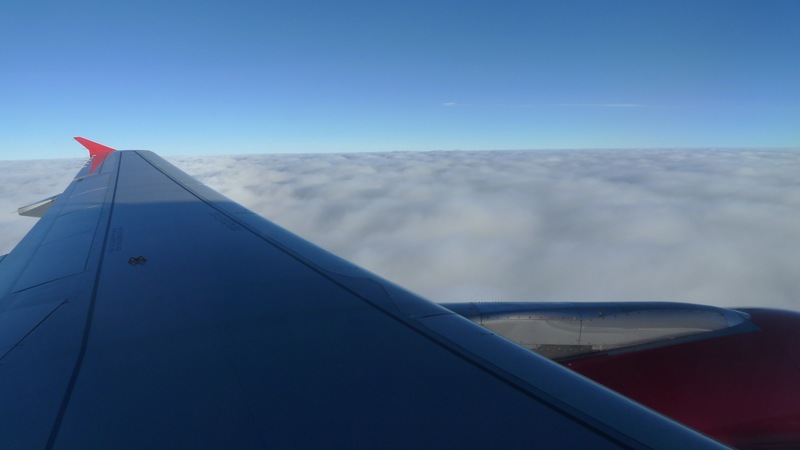 The captain greeted us aboard the flight, informing us we were cruising at flight level 350 – 35,000 feet above sea level – at a speed of 815 km/h (506 mph).  The flight was smooth, crossing Laos, Vietnam, and the South China Sea on our way to Hong Kong. 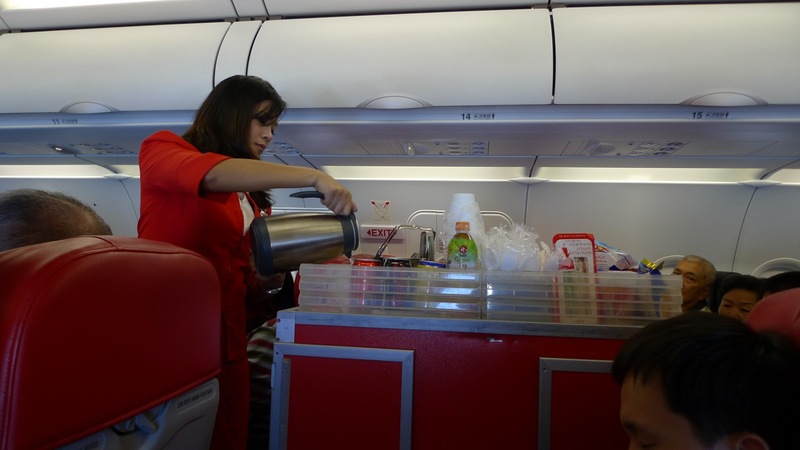 Air Asia is a no-frills airline.  Other than buying a seat on the plane, everything else from baggage to seat assignments to food has a price tag.  While I get bummed when I see formerly full-service US airlines doing this, I have no qualms about Air Asia doing it because that has been the arrangement from the first day.  Plus, they provide genuinely friendly and caring service, something most US carriers seem to be missing.

One arrangement they offer is the ability to pre-book your meals from a selection of more than 20 dishes such as pad thai, nasi lemak, chicken rice, and basil fried rice with chicken.  Out of Bangkok the catering is done by local restaurant chain Seefah (“blue sky”).  Dishes are around 100 baht, about US$3.30, and are reasonably tasty for the price. 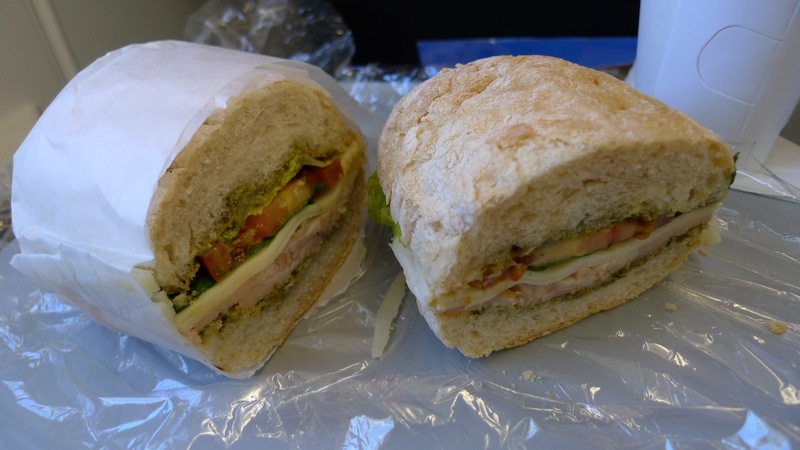 While they announce a “no outside food” policy, I’ve found if you keep your dining on the down-low, it seems to be no problem.  Before leaving home, I had used the last carefully-selected food items from the refrigerator to make two turkey and provolone cheese sandwiches, complete with homemade pesto-mayonnaise sauce.  All in all, I have to admit they were a little dry, but still a tasty way to start the day. 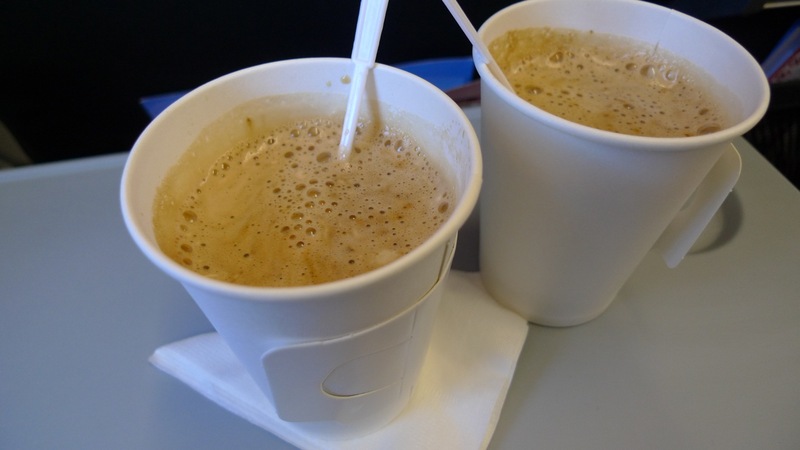 Needing some more caffeine, I ordered two “Old Town White Coffees”, which are the three-in-one coffee, creamer, sugar mixes from the Malaysian chain Old Town Coffee.  Maybe it is just all the sugar, but these are a surprisingly tasty treat.

Food and beverage service concluded, the flight attendants plied the aisle with duty free and souvenirs.  I can’t imagine why people flying would want to buy some of these things, but it appears they do.

As much as I have had my qualms about Air Asia in the past, more recently I’ve come to respect them.  Their once abysmal on-time performance has significantly improved.  Their website, which would crash under the pressure of too much traffic, performs more reliably.  And they keep their fares low and frequencies high.  Kudos for that. 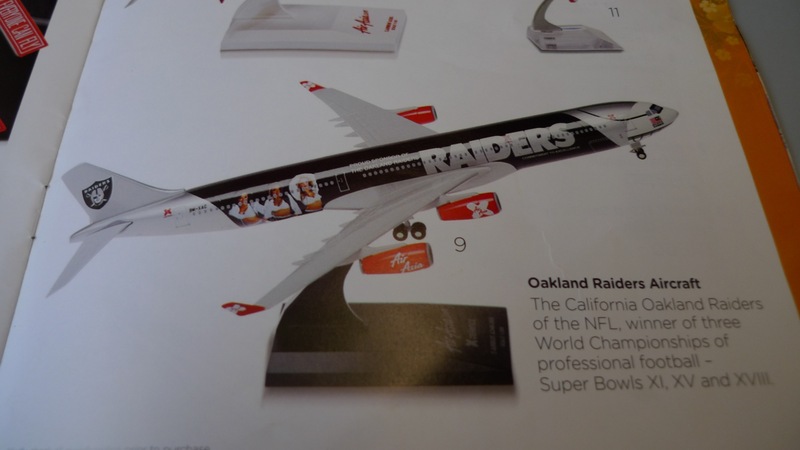 Interestingly, Air Asia is the official airline of the Oakland Raiders, despite Air Asia flying nowhere in North America.  The Air Asia CEO Tony Fernandes has explained it as something of a preemptive move, building the brand in anticipation of an eventual service to the Bay Area.  Air Asia already flies to Paris and London through their Air Asia X long-haul subsidiary, so it would not be a surprise to see them begin flights to Oakland eventually. 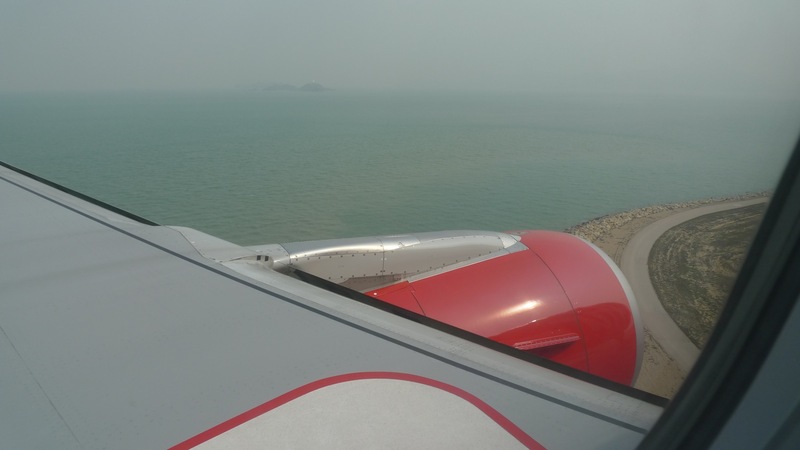 Descent into Hong Kong seemed to begin quite quickly, less than two hours after takeoff.  I’m reminded that there was a time in my life when a 2-3 hour flight seemed long.  Now that I cross the Pacific several times a year, two hours passes in the blink of an eye.  We touched down on runway 7-Left about twenty minutes ahead of schedule under skies as hazy as they were in Bangkok. 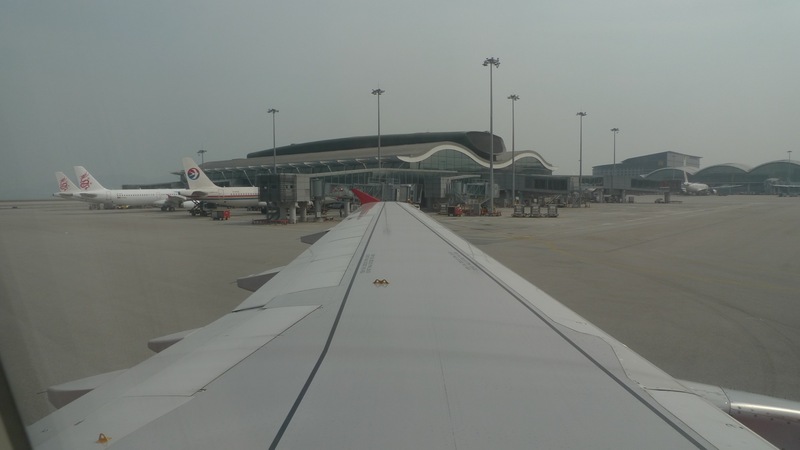 The north satellite concourse (with gates numbered as 501-510!), which seems to serve carriers heading to and from Mainland China.  I like the design of the roof, which reminds me of a bird in flight. 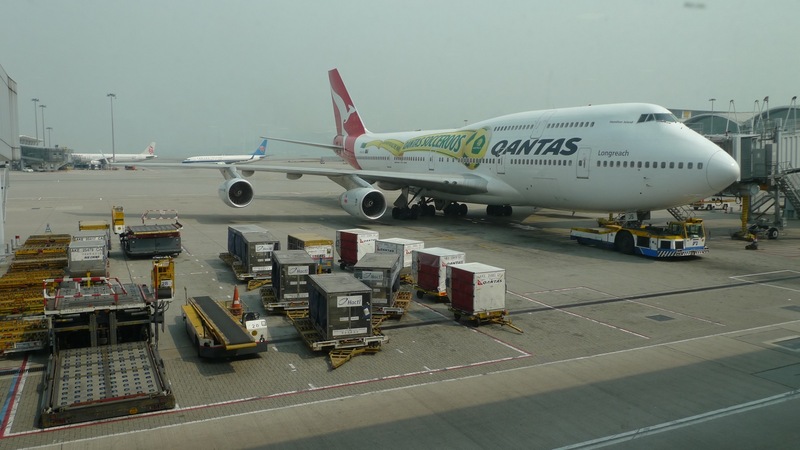 We parked at gate N28, just a short walk from the main terminal.  Next to us was this Qantas Boeing 747-400, which has a color scheme similar to Air Asia’s, I think. 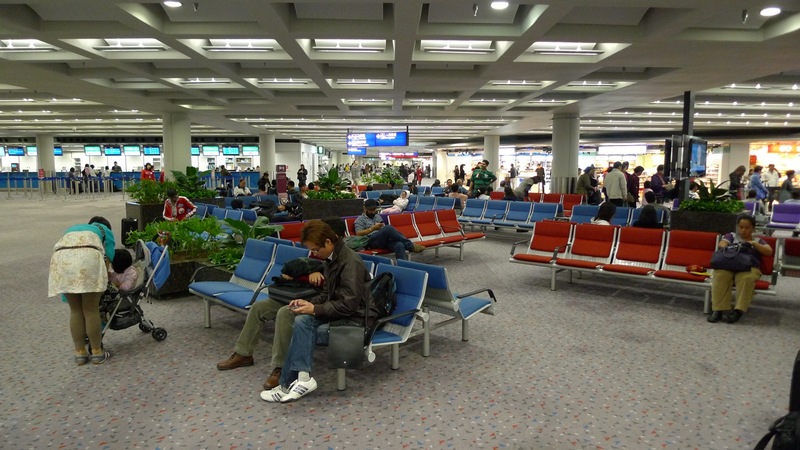 Here is the transit check-in and duty free area just before immigration.  Earlier, I wrote about how Suvarnabhumi Airport in Bangkok fails to reach the same level as other regional airports such as Hong Kong.  Compare the above picture with the fourth one from the top of this entry.  While the chairs in Bangkok might be more comfortable, the whole setting here in Hong Kong looks more attractive and warmer.  Maybe it is the use of – gasp! – carpeting.  In either case, Hong Kong remains one of my favorite airports and sets the bar which Bangkok will have to reach. 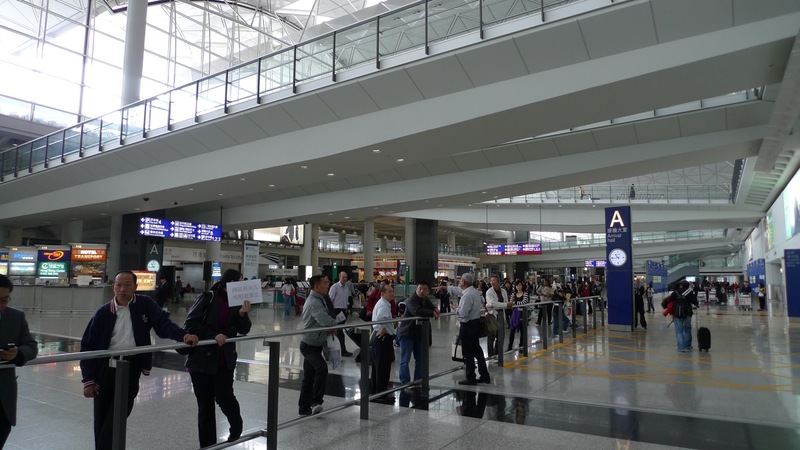 We exited customs and immigration with minimal delay and entered the spacious and well-organized arrivals area, another distinction between Bangkok and Hong Kong. 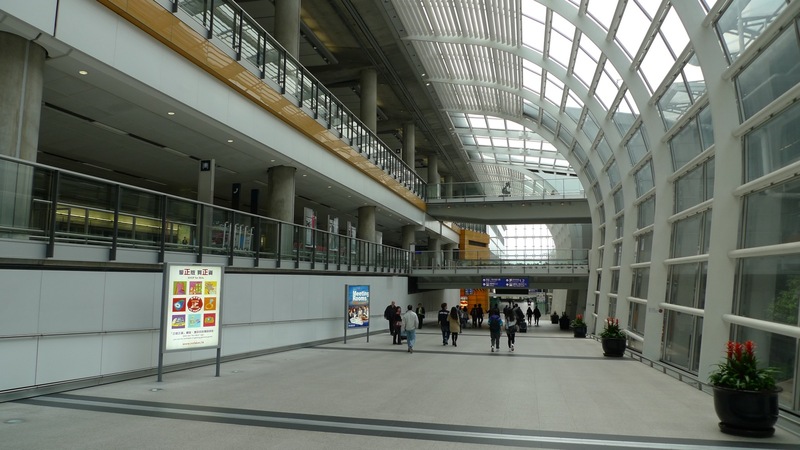 Since we had exactly twelve hours between our arrival and the departure of our next flight, we decided to check our bags into the lockers and head into the city for lunch.  An attractive atrium leads from Terminal 1 underneath the Airport Express train station and to Terminal 2, where the lockers are located.  We were able to store our two large check-in bags plus a trolley bag for 80 HKD (about US$ 11) for up to 12 hours, quite a reasonable price. 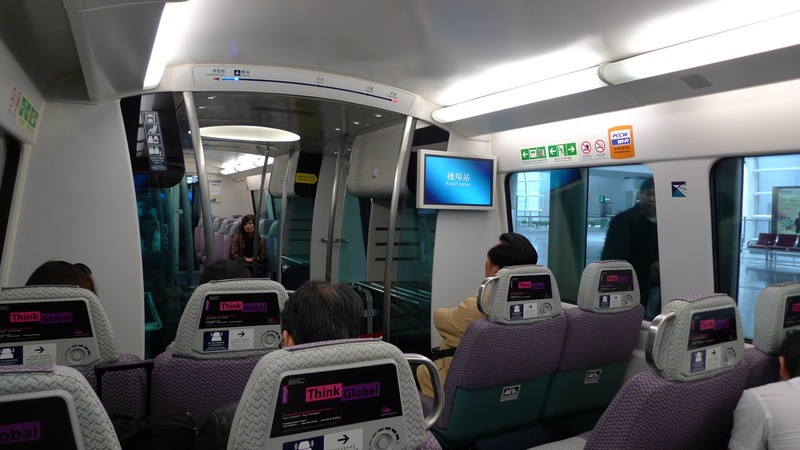 Within an hour of touching down on the runway, we were boarding the Airport Express train for the 24-minute ride into the city.  I’ll write about our day in Hong Kong in the next entry.  Stay tuned!

0 thoughts on “Bangkok to Hong Kong”