With exactly twelve hours to kill between landing in Hong Kong and that evening’s departure to Hawaii, we decided to head into the city for some lunch and a little window shopping.  Something I love about Hong Kong is how easy and convenient it is to get into (and around) the city from the airport. 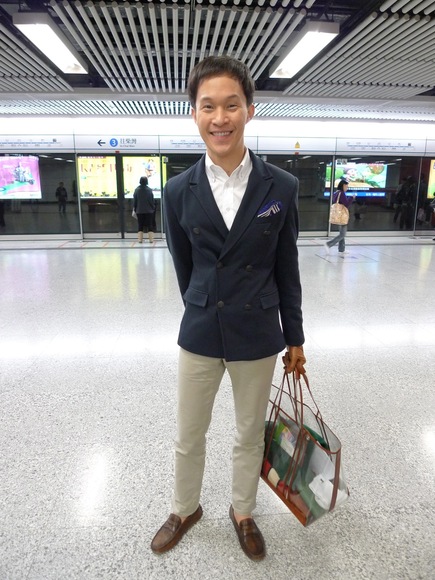 Tawn in his travel outfit and clear tote bag, waiting at the Admiralty MTR station as we connect from the Airport Express line to the Island line on our way to Causeway Bay. 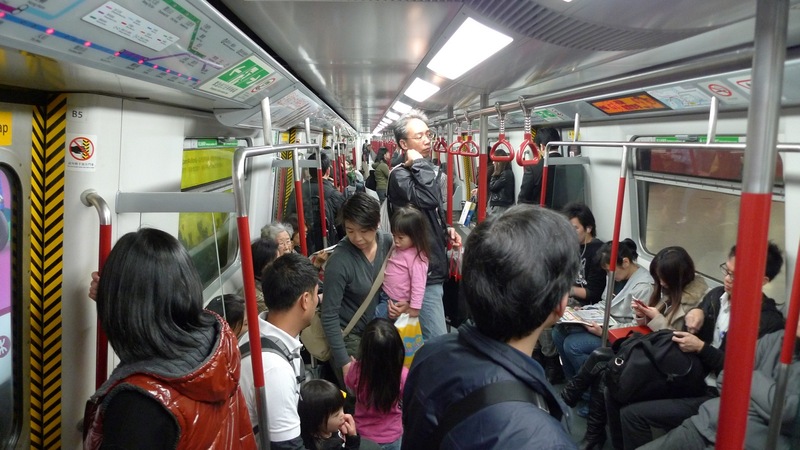 Something that amazes me about Hong Kong is the effectiveness of its transit.  Granted, this is partially a function of the relative density of the city, but I think a lot of credit goes to the design of the system.  With a population of 7 million residents, the MTR (the rail portion of the transit system) carries a daily average of about 4 million riders.  The main lines run with eight cars (the maximum) at all times and they seem to usually carry a crowd despite trains arriving every few minutes.  I can only hope that one day Bangkok manages to develop a transit infrastructure that is as integrated into residents’ daily use as Hong Kong’s is. 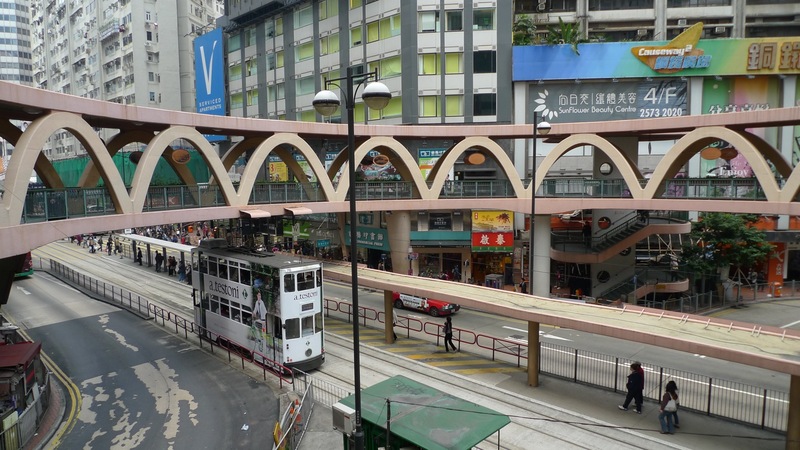 Our destination was Causeway Bay, the heavily built-up shopping district on the northern side of Hong Kong Island.  This wonderfully retro pedestrian flyover is built along Yee Wo Street right at Pennington Street.  With the Hong Kong trams running down the middle of the street, it is easy to feel caught in a bit of a time warp.  Notice the stairs on the opposite side of the picture. 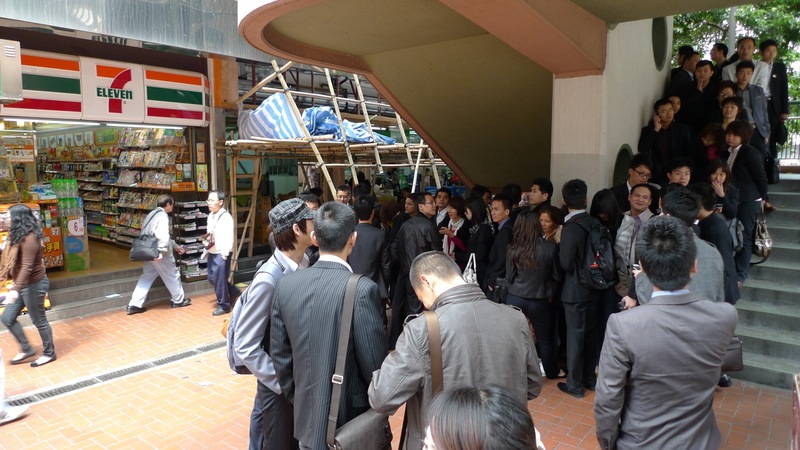 When we passed by an hour later, there was a queue of people, mostly office workers, forming up the stairs.  We couldn’t confirm what they were queuing for, but Tawn thought it might be for a restaurant behind the scaffolding.  My suspicion is that it isn’t for a restaurant, as that would be a crazy amount of potential customers on a short lunch break.  I should have explored because if a place is attracting this much attention, it must be worth knowing about. 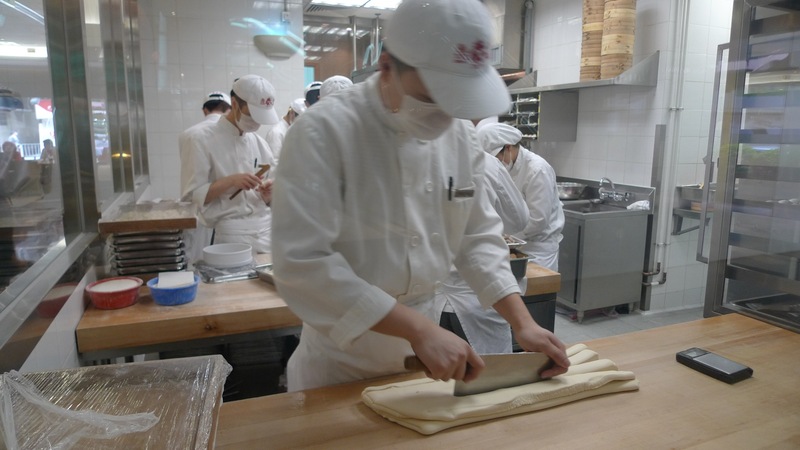 The first stop was at the Causeway Bay branch of Taipei’s favorite dumpling house, Din Tai Fung.  There are those who say that the branches outside of Taiwan don’t live up to the standards of those inside the country.  My experience in Singapore has been positive but I was curious to see how the food compares in Hong Kong. 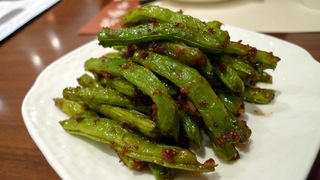 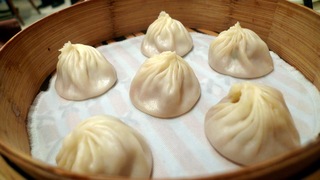 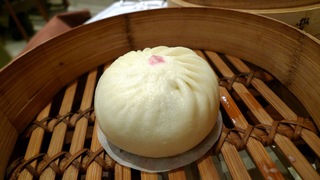 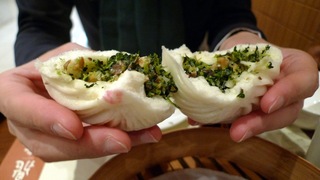 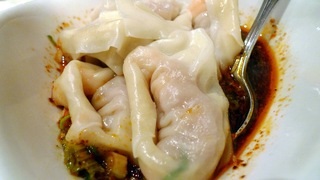 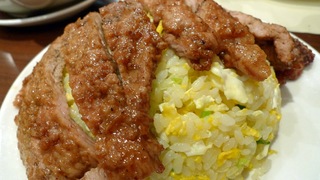 I’ve written about Din Tai Fung on other occasions so won’t go into a lot of detail other than to say that with the exception of the Xiao Long Bao (upper right) and the spicy shrimp dumplings (lower left), the food was a bit bland.  We were actually considering sprinkling salt on everything.  Perhaps they’ve stopped using MSG, to the detriment of our taste buds! 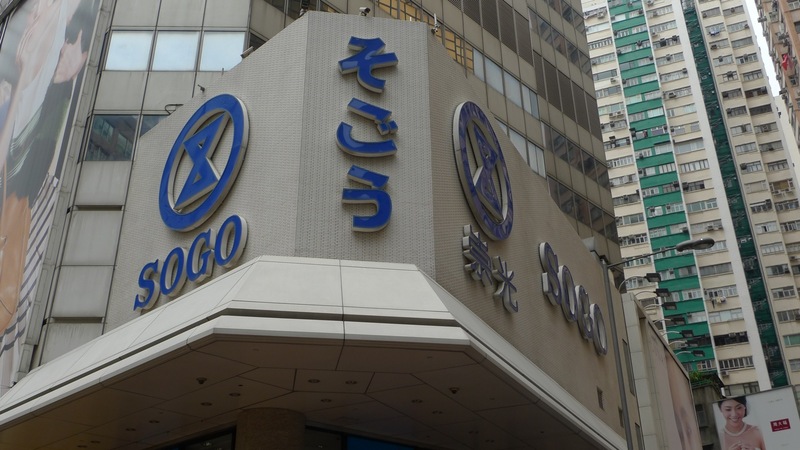 After lunch, we went to do a little shopping.  Well, window shopping.  Reportedly, the rents in this shopping area of Causeway Bay, which feature global retailers such as this Sogo shop from Japan, are among the highest in the world, nearly equal that of New York’s Fifth Avenue and London’s Sloane Street. 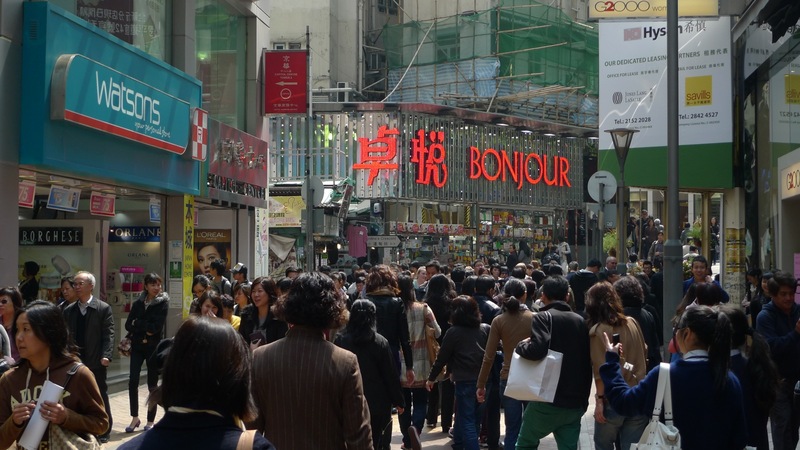 Seeing the crowds, I’m reminded of Tokyo’s Shibuya district.  This is true even more true at night, when all the lights are on and the streets glow nearly as bright as day. 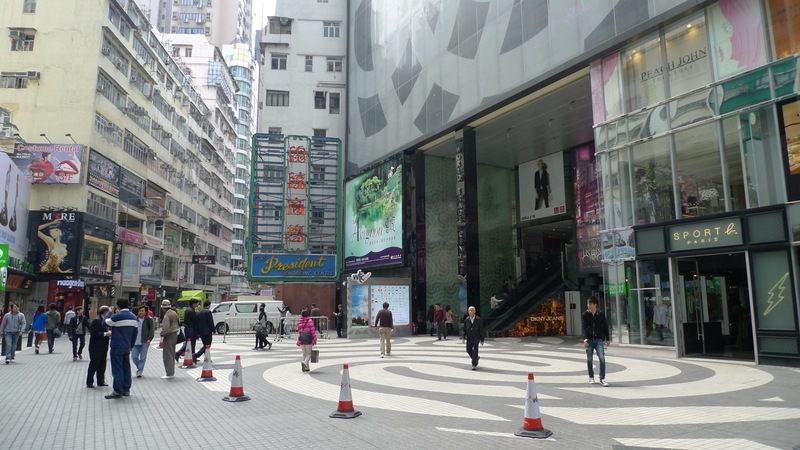 After some shopping we headed to the Excelsior Hotel for an afternoon treat.  On the way there we passed the World Trade Center mall, which has this odd quasi-pedestrian area outside.  It is open to traffic as a driveway but there aren’t many cars.  Because of that, it feels sort of like a set on some Hollywood (or in this case, Hong Kong) movie studio back lot. 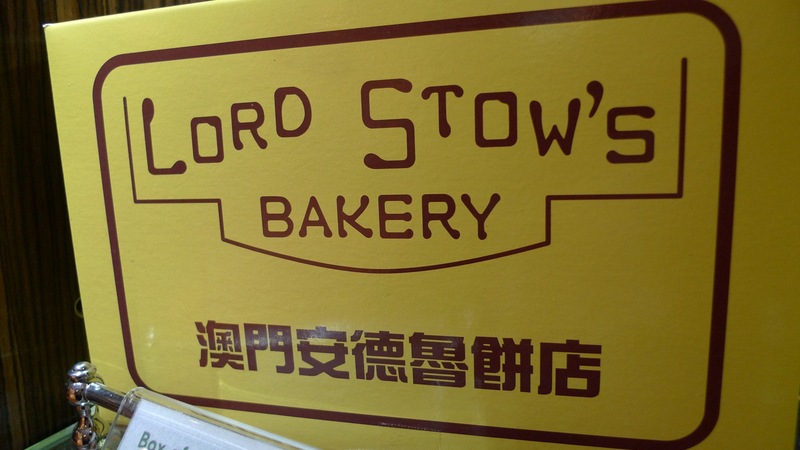 The coffee shop at the Excelsior (which is a part of the Mandarin Oriental group) features Portuguese style egg tarts from Macau’s famous Lord Stow’s Bakery.  I found out about this when MIA Xangan Wangium posted some pictures on Facebook from his recent trip to Hong Kong.  Good to know both that Jason is still alive (although not posting very frequently here on Xanga – hint, hint) and that there is a convenient source for these tasty egg tarts. 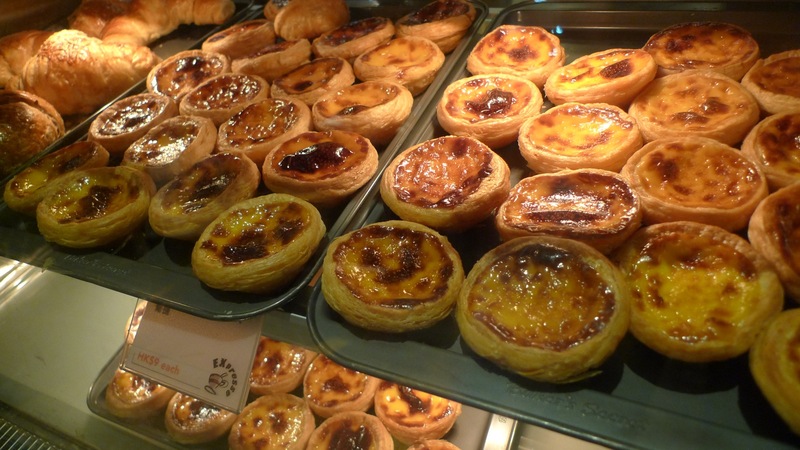 The thing about Portuguese versus the Chinese style egg tarts is that the tops are lightly caramelized so they are a bit like eating creme brulee.  Very rich, but with a coffee or tea to cut through the richness, they are a wonderful afternoon treat and well worth a trip into town from the airport. 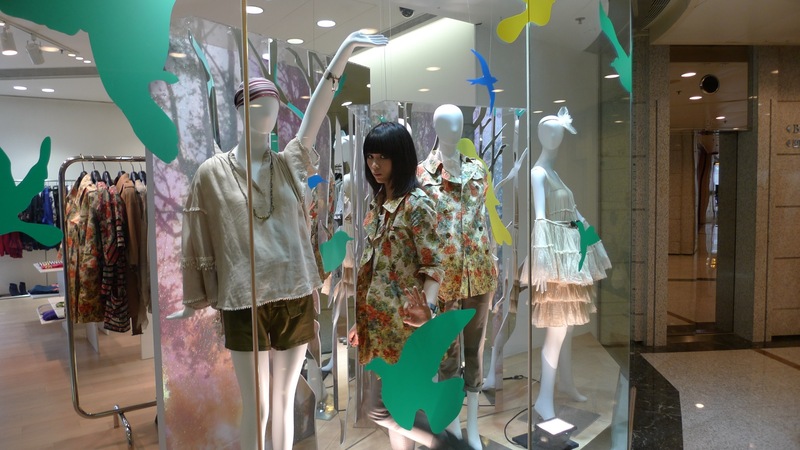 We did a little more shopping after the tarts.  This is at Lee Gardens, another shopping center in Causeway Bay.  I took a dozen shots of this scene and this is the only one that turned out.  A clerk, who seemed a bit self-conscious about the pictures I was taking, was wearing the same jacket that she was placing on the mannequin.  I kept trying to get a good shot of her arranging the jacket on the mannequin but those didn’t turn out.  Finally, as she finished she turned and shot me this look, almost like a mannequin come to life. This is another shot that almost came out but didn’t quite.  I was shooting this nursery delivery truck when a bellboy at the hotel walked by pulling a trolley bag.  I missed the perfect shot by just a split second and his head is slightly cut off.  Nonetheless, I find the composition pleasing. 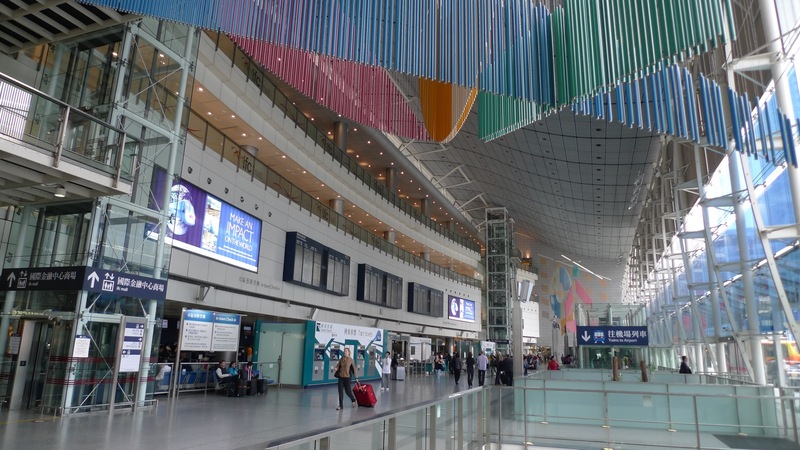 By about 4 pm we were getting tired, a combination of about four hours’ sleep the night before, a very early departure time, and the wear and tear of travel.  Instead of continuing our shopping or meeting up with friends for an early diner, we decided to head back to the airport.  We went to the Airport Express station, which has this beautiful check-in lobby, before boarding the train. 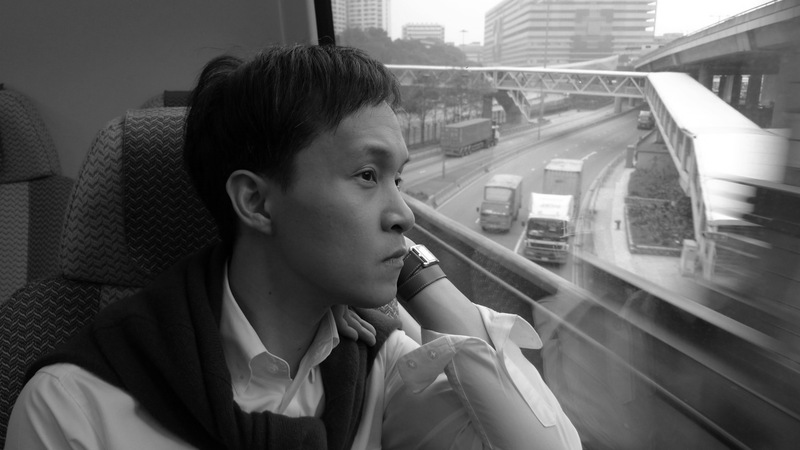 On the way to the airport, we were both nearly wiped out.  While Tawn will probably not like this picture because it doesn’t show him in as refreshed and smiling a way as he usually presents himself, I think it is a beautifully contemplative portrait, nicely composed, that really captures the sense of both stillness and motion that we were experiencing on our journey. 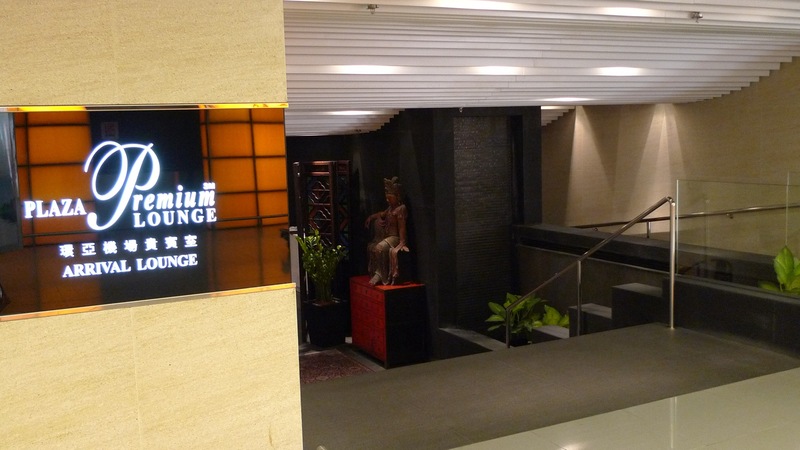 With a little more than five hours before our flight, we decided to get some rest.  Hong Kong Airport features a lounge in the public (pre-security) area of Terminal 2 where you can rent day rooms in three-hour increments.  Each room is a tiny, although well-appointed, single bed and bathroom.  The rate was a little steep – $60 for 3 hours – but knowing we wouldn’t get much opportunity for decent sleep for the next 20 hours or so, we figured it was worth it.

Continued in the next entry.

0 thoughts on “A Half Day in Hong Kong”