Sometimes a short staycation is just what the doctor ordered.  Literally.  On my return to the doctor, much as I expected, there wasn’t any significant improvement with my lung infection so I’m doing two to three at Bangkok Hospital.  Thankfully, I bought expat insurance a year ago which covers hospitalization expenses at a pretty generous level.  Didn’t think I’d have the need for it anytime soon but there you go… better to be prepared. 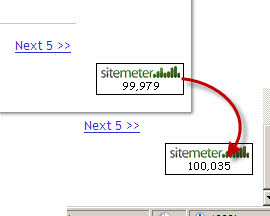 While this blog serves primarily as a means to keep my friends and family up to date on what’s going on in my grand adventure in Thailand, I’ve been fortunate to receive so many other visitors.  To those of you who are here, who have stayed, and who actively participate in the conversations, thank you!

Having never been hospitalized before, I was eager to have a new experience to blog about.  So far all I can say is, it’s tedious!  Today was a public holiday so Tawn was with me part of the day before returning home to run some errands and subsequently stubbed his small toe, getting a hairline fracture in the process.  When he returned to the hospital he visited another doctor to receive treatment.  The plum purple toe is slowly losing its swell and hopefully he’ll be back in easy walking condition soon.  So now we’re both ailing!

As for me, I had to deal with a ongoing problem I have – elusive veins.  After poking around several times and not finding an active vein into which to run the IV line, a very sweet and apologetic nurse handed me off to someone else, who was able to strike oil on the first try. 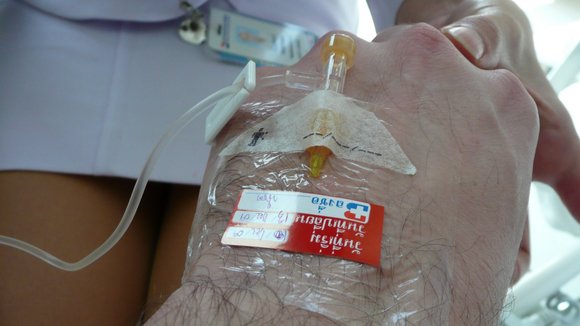 Labels and stickers are on so I’m now officially the property of Bangkok Hospital.  Apologies for the Sharon Stone-esque shot.  The nurse did not cross her legs.

The “deluxe” rooms that the insurance covers were fully booked so they moved us to a “superior” room at no additional cost.  No kidding, this place is nearly as large as our condo!

I have an amazing view of the city and enjoyed a fantastic sunset. 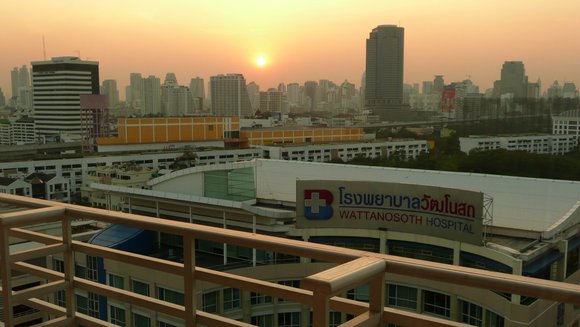 The doors are locked to the balcony, though.  Will have to check tomorrow and see if they’ll let me out to take more pictures.  There’s a rooftop helipad just to the right of this picture.  If there’s a lifeflight arrival you know I’ll be filming!  =D

The food service is provided by Sodexho and I receive a menu for the following day.  Two choices for breakfast, lunch and dinner in the genres of Thai (oddly labeled “Oriental” food), Western, Vegetarian, Halal (labeled “Arabic”) and Japanese food.   I’m going with Thai meals as they are tastier and half the cost of the western meals.  Not clear what the prices are for the vegetarian, Arabic and Japanese meals but maybe if I stay longer I’ll experiment.  Here’s lunch as a sample: 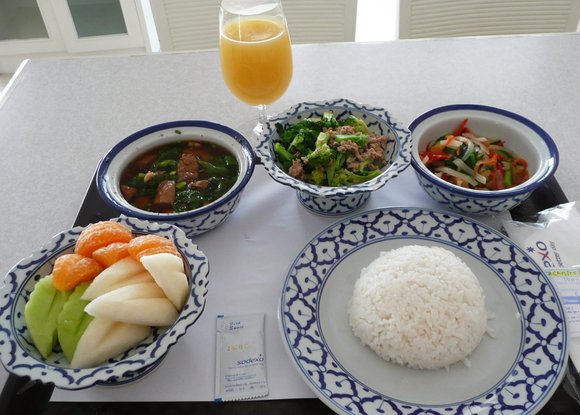 Fruit plate for dessert, a clear soup with dark leafy greens and braised beef, ground pork with broccoli (which needed some fish sauce added for flavor) and a fried white fish with onions, green onions, carrots and cilantro in a sweet and sour sauce.  Huge amount of food and actually, not too bad!

A quick observation: I’ve been on an IV nonstop, a litre of saline slow dripping into my arm with injections every eight hours of this liquid antibiotic.  When they plunger it into my veins, I can feel it making its way up my arm, relatively cool (I guess they refrigerate it) and like an extra wave of blood heading for the heart.  Not painful but a very unique sensation.

Anyhow, I’m here for at least a few days.  No excuse not to stay on top of my blogging, I guess, as I have plenty of free time.  Ciao.