In the interest of not falling too far behind in my posting, I’ll get pictures up with some comments and then can go back to fill in stories and details later.  Saturday we headed to Shibuya, the center of Tokyo youth fashion.  The main intersection at Shibuya – (the one that when you’re in Times Square in New York makes you think, this looks like the “Shibuya of the US!”) is the one featured in Sophia Copola’s “Lost in Translation”.  Some two million people a day pass through this intersection. 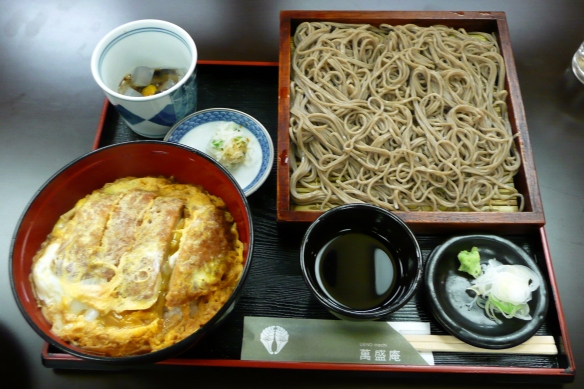 We started our day with a quick bite at one of the commuter restaurants near the Ueno train station, a simple meal of katsudon (fried breaded pork cutlet topped with scrambled egg and served over rice) and soba (buckwheat noodles). 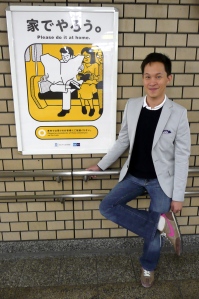 As we waited for the train, Tawn took care to observe the various signs warning as to correct behavior on the trains. 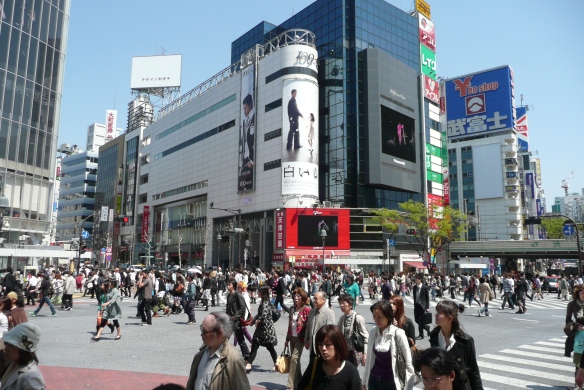 We arrived in Shibuya and spent a few minutes just taking in the sheer number of people.  Unlike Manhattan’s Times Square, which stretches over several blocks, Shibuya’s crowds converge at one single intersection. 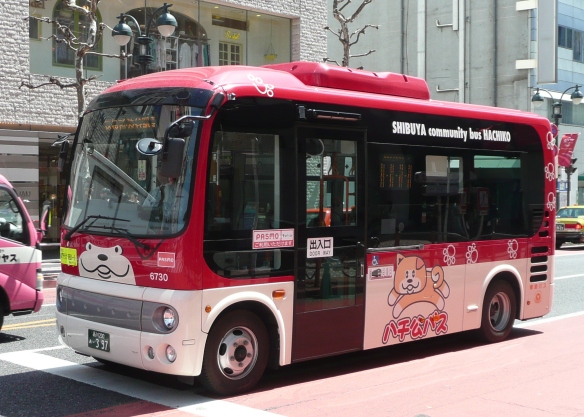 There is a free shuttle bus for the area.  But what really struck me about this bus was an observation that Tawn made: here in Japan there are cartoon characters used all over the place: signs, advertisement, logos, announcements… anything and everything can have a cartoon character and still be taken seriously. 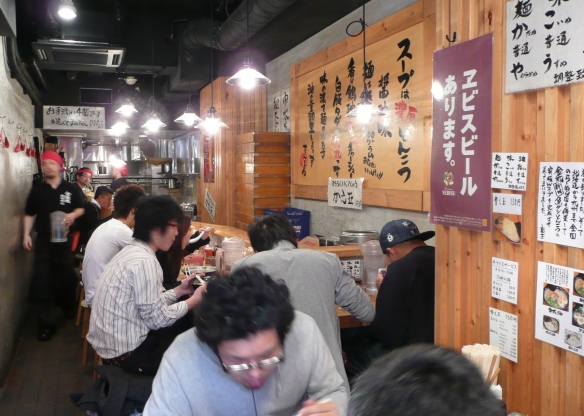 We met Taro and his friend Kathy near the station and then went to Taro’s favorite ramen restaurant.  This one specializes in noodles that are slightly thicker than the average. 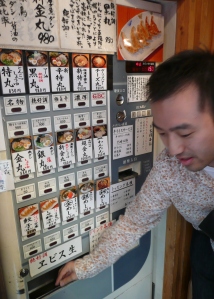 The restaurant only seats about twenty people, mostly along a counter.  Before you enter, you select what you want on a vending machine near the front door and pay there.  Your order is transmitted to the kitchen and you receive a small ticket in exchange.  Don’t read Japanese?  No problem – order by picture. 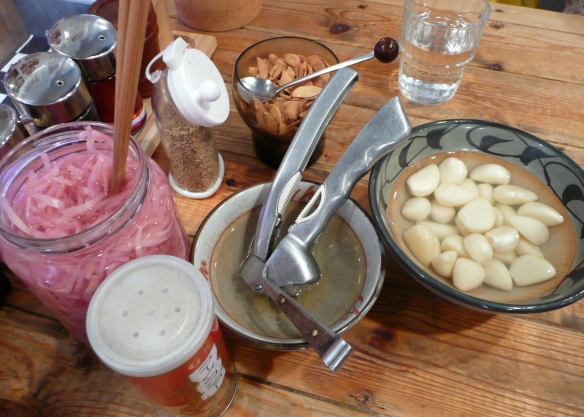 Our table came with a wide range of condiments: Pickled ginger (pink), toasted sesame seed grinder, black pepper (in the can), toasted garlic, and fresh garlic. 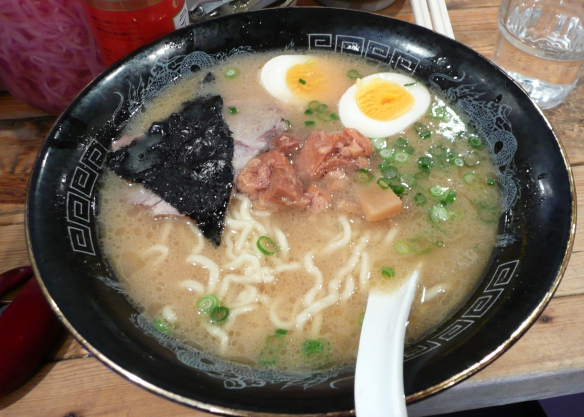 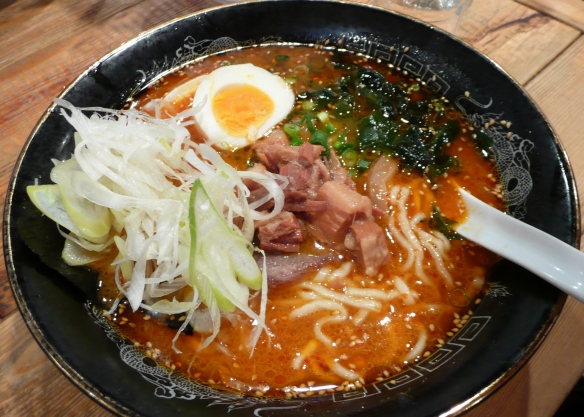 Our soups arrived – a traditional one for me and a spicy version for Tawn.  The difference that makes this ramen so good, Taro says, is the soup.  Instead of being just one or the other, the soup is a mixture of pork and fish broths.  Sure enough, it was the best ramen I’ve ever had. 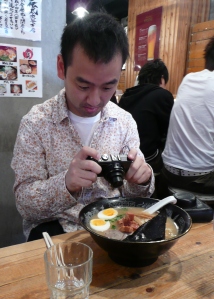 You’ll be glad to know I wasn’t the only one taking pictures.  Taro had a new Panasonic Lumix camera that had superb low-light performance and macro function. 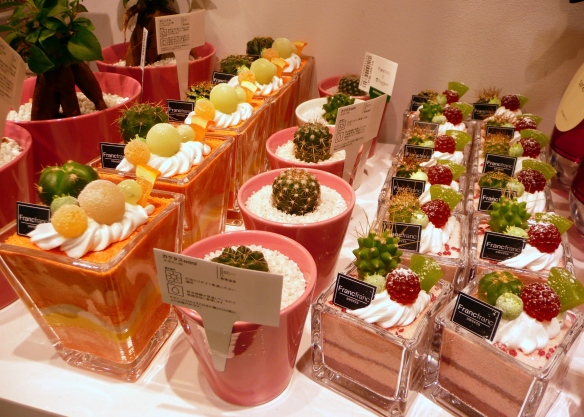 After lunch we did some sight-seeing / window-shopping in Shibuya.  There were these funny little fake cacti plants done up to look like desserts. 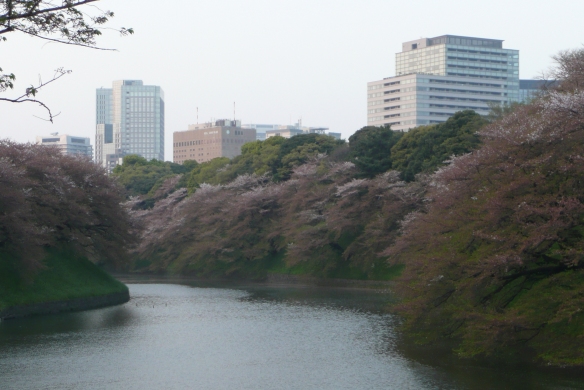 We went to the park that runs along the northwest side of the Imperial Palace’s moat.  With two windy days since our arrival the cherry blossoms were largely descimated.  But to give you an idea of what it would have looked like, see this picture below.  You can still see the cherry blossoms – now imagine them with about 20 times as many blossoms, hanging down the bank towards the water.  That was what it was like a week earlier. 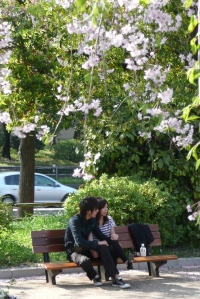 This is one of the most popular paths both for cherry blossom viewing and general strolling.  There were plenty of young lovers enjoying the breezy spring weather. 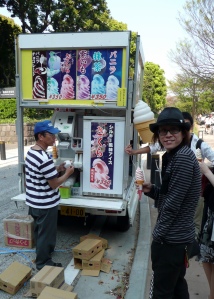 Where there are people there are invariably ice cream vendors.  Some locals were posing for my camera. 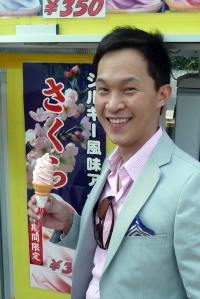 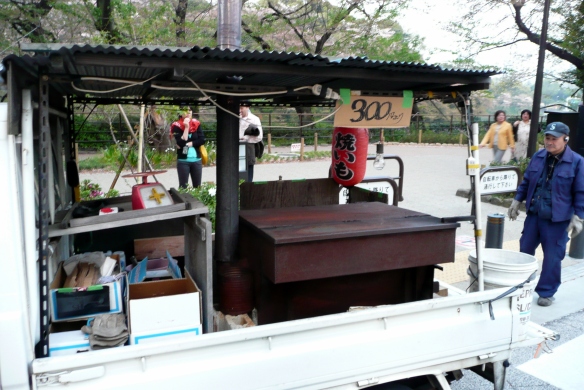 In addition to ice cream vendors, since the weather was a bit chillier today than the day before, there was a roasted sweet potato vendor, using a wood-fired oven in the back of a truck.  Very creative arrangement.  At 300 yen ($3) per potato, these sweet and hot morsels were perfect for warming us back up after the ice cream.

We walked from the moat towards the Yasukuni Shrine.  This beautiful shrine is the official home of State Shintoism.  It is also the shrine regularly in the news when a Japanese prime minister goes to pay his respects to the war dead, outraging residents of nations such as Korea and China that see this as Japan’s continued unwillingness to acknowledge and come to terms with the attrocities it committed during World War II.

The extensive museum there definitely tells the history of the so-called “Greater East Asian War” from the Japanese perspective.  It is useful to understand how they see things but also easy to see why neighbors who suffered at Japan’s hands take such offense.  I could go into a lot more detail here but won’t do so right now… 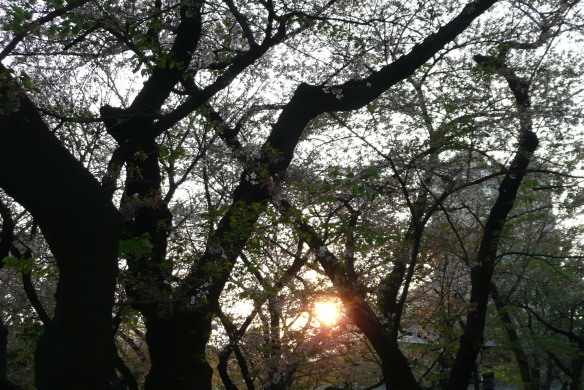 Above, the sun setting through the fading cherry blossoms at Yasukuni Shrine. 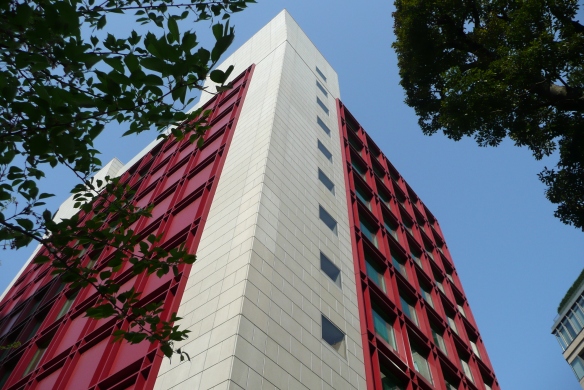 There was some fascinating architecture in this part of town, including the striking Italian Cultural Institute building.  This neighborhood (surrounding the shrine) reminded me a lot of downtown Seattle, actually.

That evening, we met up with HP and Mark (from San Francisco) and another couple with whom they were traveling.  Taro took us to an amazing (and amazingly hard-to-find) Okinawan style restaurant.  His camera’s low-light capabilities were put to good use and once I get all the pictures from him, I’ll do an entry just on that meal. 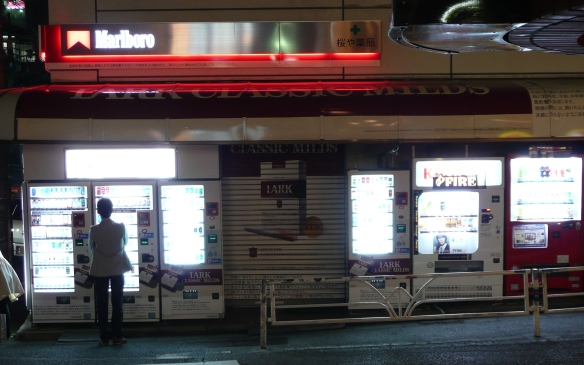 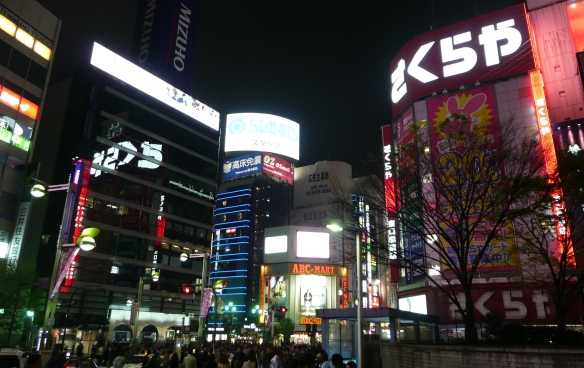 Finally, we headed to Shinjuku, Tokyo’s nightlife district, for some drinks.  This was just one corner of the city that looks like something out of Blade Runner.

0 thoughts on “Shibuya and Surroundings”