Sorting through pictures last night, I realize that there are so many things we’ve seen and done and so many things we’ve eaten, that unless I write huge entries, I’ll be writing about this trip for the rest of the month!  At some point I’ll have to wield a sharper editor’s sword.

After a morning wandering Ueno Park viewing sakura (cherry blossoms), we went to Ueno Station, one of the larger stations in the city and the convergence of several subway and rail lines.  The station itself has been transformed into a bright and modern shopping arcade and it is a pleasant place to transit through.

We were there to meet Alex, our friend Doug’s brother who has been living in Tokyo for several years and was so helpful in answering questions and making recommendations before our arrival.  He continued to be a perfect host, spending the afternoon to show us around Ueno, the residential district on the north side of town that is home to Tokyo University and many of the city’s museums.

First stop, though: lunch.  A block from the station, tucked under the tracks, is a hole in the wall gyoza shop called Rising Dragon.

How do you know the good places to eat?  The queue snaking out the front door.  These family-run operations are really efficient, tight ships both in terms of organization and efficiency.  Out in front one man was making trays of gyoza – the Chinese-inspired dumplings you probably know as “pot stickers” – and packaging them uncooked in take-home trays for those commuters who wanted to prepare them fresh that evening.

How many gyoza are made each day?  Guessing from the vat of pork filling, which was several gallons in size, I’d say the answer is easily in the thousands, served four at a time to hungry customers.  There are only ten seats in the place, all along a single marble counter facing the galley kitchen.  The place is spotless – not surprising in Japan but still amazing given the quantity of oil and high temperatures used in cooking.

The menu was simple: noodle dishes served either as stir-fries or as soups and, of course, gyoza. 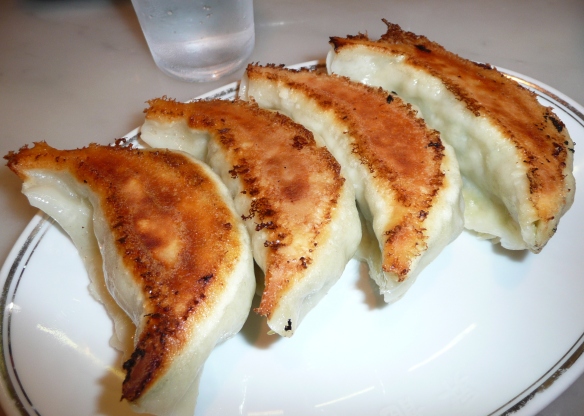 These gyoza are about three times the size of the typical one and I can safely say they were the best “pot stickers” I’ve ever had.  The exterior was perfect: steamed to a tender but not mushy consistency with a crisp but not tough bottom.

We also had a few noodle dishes: yakisoba (fried soba noodles) and a vegetable stir fry with bean sprouts and pork.

After lunch we headed through the park again up towards the University.  Alex’s touring brought us through back streets and a thorough exploration of the neighborhood where he lives.

This was an excellent introduction to Tokyo as friends who have visited before have told us how overwhelmed they were with places like Shibuya and Shinjuku – some of the most crowded intersections in the world.  Starting small allowed us to explore the life of Tokyoites without the Blade Runner-like aspects of the busiest corners. 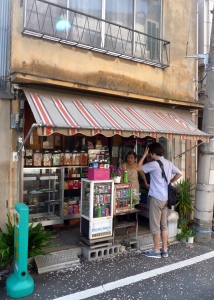 Above is an example of a small mom-and-pop convenience store that, until Family Mart and 7-11 started showing up, was a typical sight in neighborhoods.  This is where you bought snacks, beverages, and little supplies for your daily use.

Sadly, these are the types of stores that are disappearing.  Still, in the densely packed neighborhoods without a lot of free space, there might be a place for stores like these because there isn’t enough room for a modern convenience store to operate.

At another little shop, a green grocer, we bought some beautiful looking strawberries.  Alex informed us of Japanese strawberries’ reputation: supposedly the best in the world!

Were they?  Watch the video to find out.

This is an example of some of these smaller back alleys that are typical of this neighborhood.  They are confusing to navigate but fascinating to explore.  One house had all of these small flowering potted plants sitting on shelves out front, a good example of something we saw again and again: people tried very hard to incorporate nature into their lives, even in a place that is as urban and paved as this one.

We continued through another park and shrine where we caught a group of turtles dozing on top of one another in the afternoon sun.  It was pleasant weather – about 22 C / 72 F and a light breeze.  We couldn’t have asked for better temperatures. 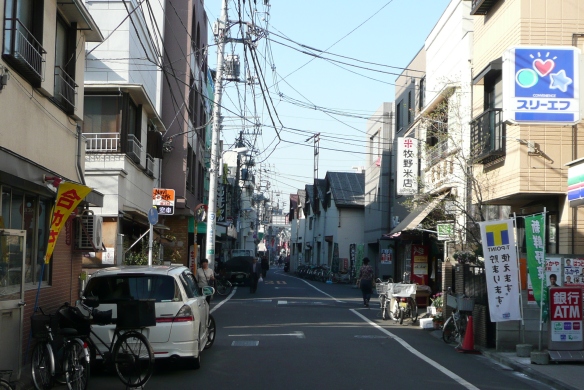 Another street shop in the Ueno area, this one more typical of a street large enough for cars.  There were so many interesting shops in this area and very friendly people.  Of course, it helped that we had someone fluent in Japanese with us, but I suspect they would be just as friendly even if we were alone.

A nice contrast of colors parked in front of a shop.  I’m amazed at how many people ride bicycles in this city.  When they park them they just lock a chain through the back wheel.  The bicycles themselves could easily be picked up and carried away but that doesn’t seem to be a concern.

In Alex’s neighborhood there is another shrine and small cemetery.  Cremation is typical and so an entire family’s ashes will be stored in a single grave site.  The wooden sticks are prayers that are written and placed at the grave on the anniversary of a family member’s death.

Same graveyard but looking from the top of Alex’s condo, the building on the left of the picture.

We stopped by Alex’s condo for a drink of water and then to climb onto the room and take in the view of Tokyo as the sun lowered.  As you can tell from Tawn’s hair, it was a bit breezy at this point. 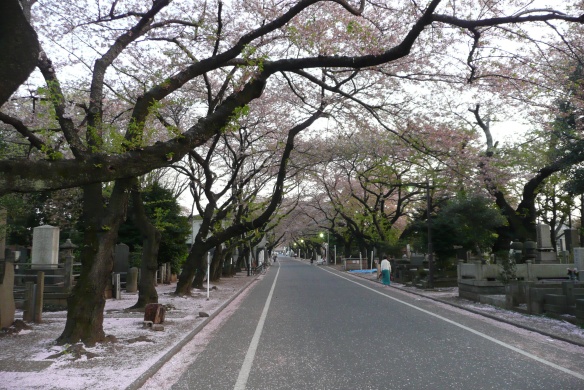 As Alex had another appointment, we navigated back to our hotel, walking through another beautiful cemetery, Tokyo University and Ueno Park before returning to the bright lights and bustle that we had previously associated with Tokyo.

Above, the final few blocks take us back to the bright lights of Tokyo near Ueno Station.  Can you find Tawn in the picture?

0 thoughts on “Around Ueno”