First of all, let me make this clear to those of you who might think we’re running around enjoying adventure after adventure: these blog entries are not chronological.  Instead, there is a delay as I process photos and videos and then I arrange entries to provide some variety.

With that administrative tidbit out of the way, let me share a day trip we recently took to Pattaya, the beach side city of sin located less than two hours to the southeast of Krungthep.  I’d never before been to Pattaya because its scuzzy reputation (although the beaches are supposedly gorgeous) kept me disinterested.

“I wonder how long it will be before we see our first fat farang on a scooter with a tiny Thai girl behind him?” Tawn asked as we pulled into town.  Within two minutes, we had our answer.

We didn’t go to Pattaya to explore the town or even to try and dispel my perceptions.  Instead, we went to exchange some silk that Trish had purchased from the factory in Nakhon Ratchasima province that, upon inspection once we returned to Krungthep, turned out to be 1-ply instead of the 2-ply for which she had paid.

The factory owner has a retail shop at a recently opened faux floating market in Pattaya, so we arranged to meet her there to do a swap.

While there, Tawn wanted to find a boulangerie that had opened recently and had been featured in Thai Vogue.  It looked very cute in the magazine but of course we left home without noting its address and location.

Using the tiny internet browser on Tawn’s phone, I was able to find another boulangerie called, appropriately, Le Boulange.  Turns out it is the cousin (or sister location?) of one on Convent Road in Krungthep, owned by a real Frenchman.  The Pattaya location is just a modest storefront and is mostly a bakery, producing for stores and hotels in town. 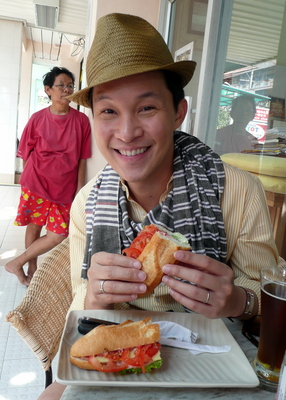 While there, we witnessed the chef talking with a French expat and his Thai fiancée about a wedding cake.  In this case, the expat was much closer in size to the Thai and they were not riding a motorbike.

The sandwiches – only available combination is baguette de jambon et de fromage (ham and cheese) were très authentique.  A robust crust that fought you back when you bit into it and a wonderful textured crumb.  And for only 35 baht (about $1) for a mini baguette, a real bargain.

Left, Tawn poses with his baguette as a local woman looks on.  Or, at least, pretends not to.

The desserts were less spectacular, but what can you expect?  At least we enjoyed a good lunch.

The chef came over after settling wedding cake decisions and asked how our lunch was.  Answering him in English, he quickly apologized and explained in French that he only spoke French and Thai.  So we continued the conversation in Thai, since neither Tawn nor I remember enough French.

Afterwards, with the disinterested local’s directions, we drove to the outskirts of the city to Talat Naam Si Pak – the Four Regions Floating Market.  Floating markets are very much a part of central Thailand’s culture, as the myriad waterways in this flood plain made waterborne transportation the easiest way to get around until the 20th Century introduction of the traffic jam.

For the tourists – and, most noticeably, for the Thai tourists – Pattaya now boasts an entirely artificial floating market that runs from dawn till dusk, every day.  Located to the south of town around an manmade lake, the shops and boardwalks connecting them are ostensibly divided to represent the four regions of the county. 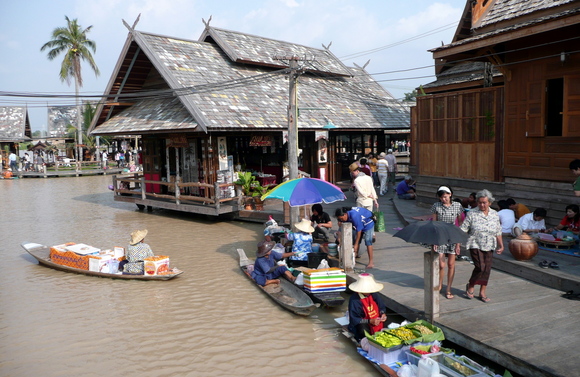 Sadly, there is little to distinguish the regions as the building are identical except for tiny emblems on the roof line meant to evoke the different regions.  From a central cooking area, vendors paddle their boats around the “canals”, offering authentic Thai food (and two-litre bottles of Pepsi products) for sale.  The Thai tour groups we saw seemed to love it, setting up mats and eating in the shade, reveling in a near-cultural experience. 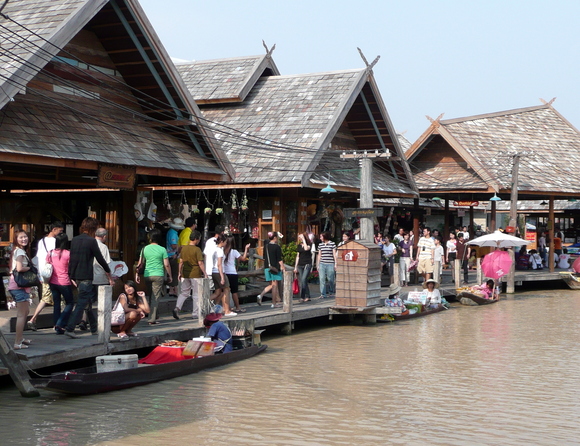 While wandering about, we located the Silk merchant’s shop.  As it turns out, she changed plans and decided to come to Pattaya the following day, but had not called Tawn to tell him.  When Tawn tried to call her, she didn’t answer.  After explaining the situation to the clerk in the shop, the clerk called the merchant, who answered the phone promptly.

The clerk then handed the phone to Tawn as he proceeded to read her the riot act in a polite, nice way – as Thais can do so well.

She promised to bring the correct fabric to us in Krungthep the following day, so we left the single-ply fabric and a sample of what the correct fabric should be.  Needless to say, she never showed up or called Tawn, and we’re now two weeks later with no resolution.

We decided not to waste any more time at the floating tourist trap, but on the way back to the car park we found something endearing: a pen of baby goats and one sheep, all three months old.  They were the center of everyone’s attention, young and old alike, and for twenty baht you could feed them a bottle of milk.

Here’s a brief video showing the scene as Tawn fed them… and plotted to shear the sheep so he could make a wool coat!

We were back in Krungthep just after sunset, delayed by my exploration of the route near the airport that Peter, Stuart and I would ride the following day.

0 thoughts on “Day trip to Pattaya”