Saturday night we invited a few people over for a pot of turkey chili (finally finished up the leftovers from Thanksgiving!) and some games.  In my mind, there’s nothing more fun than an evening spent playing board games and cards with a group of friends, supplemented by a simple and satisfying meal and a few bottles of wine.

Left to right: Tawn, Darrin, Kobfa, Si, Matt, Ken and Chris.  Chai, unfortunately, was off in Cambodia so couldn’t make it. 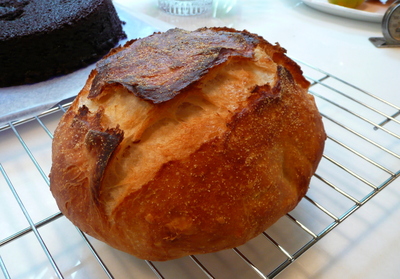 The menu was simple: turkey chili, a loaf of “almost no knead bread” (recipe from Cooks Illustrated – I wanted to compare it to the NY Times’ recipe for “no knead bread” I made a week ago), and a large green salad.

The bread looked beautiful and wasn’t as wet and sticky as the NY Times’ recipe.  But the crumb was more even and didn’t have those gorgeous large bubbles inside.  Somewhere between the two lies the perfect “no knead” bread recipe.  I’ll continue to experiment.  Kudos, though, to Cooks Illustrated for having some helpful techniques that kept me from burning my fingers this time. 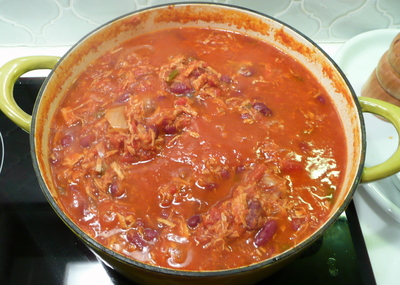 The pot of chili was good but I ran out of cumin, which I consider a key ingredient in the flavor profile of a “pot of red”.

Also, I didn’t have any masa farina – corn flour – and the handful of polenta didn’t add the same flavor or thickening that I’m used to with masa.

Most important note with chili, one I failed to heed this time: make it a day in advance.  the flavors are so much better after they’ve been able to mingle. 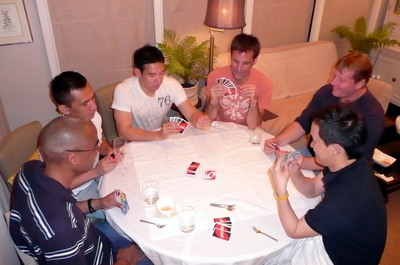 While seven people made the seating at the table a bit tight, I completely agree with Nina Garten when she says that small tables that are a bit crowded always feel more cozy.

After dinner we broke out the Aggravation, which Si and Matt brought.  Fun game but since only six could play and we were seven, we switched to Uno afterwards.  Uno is a fun game in a crowd and we played seven hands before calling it a night.  Right, the money is hidden so we’re not in violation of any Thai anti-gambling laws. 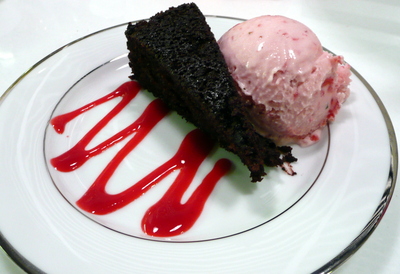 Along the way, we had some dessert: homemade chocolate cake (Stephanie’s recipe – the absolute moistest cake I’ve ever eaten) with raspberry coulis and some of Si’s homemade strawberry ice cream, which was utterly fantastic.

Certainly an enjoyable and inexpensive Saturday night.  Next time, maybe homemade pizzas?  Actually, I’ve been thinking of trying to make my own pita bread.

News of Tawn.  While in the US, Tawn picked up some rubber boots for when it rains.  Or maybe just for when he “gardens”. 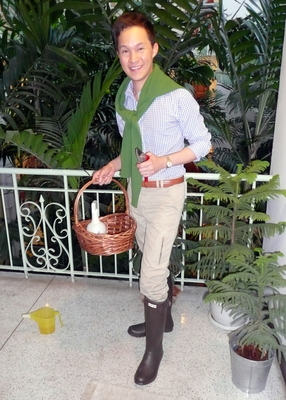 Above, Tawn in his gardening outfit, tending to the plants in the hallways outside our front door.  He looks like he should be pruning roses (or taking tea) in an English garden, no?