Moving from one culture to another is a big transition, especially if you want to make an effort to really understand the new culture.  One could argue that, try though you might, you’ll never fully understand it.  But over time, your understanding will at least increase.

We have a friend who moved here a few years ago.  He is making a lot of effort to understand Thai culture, reading books about Thai relationships (he has dated several Thais) and has taken some Thai language classes.

The challenge I face – and I want to point out that his intentions are wonderful because he’s asking because he wants to understand – is that he is a very analytical person, someone who sees things in a logical, rational, black-and-white way.  And the culture about which he is asking questions simply isn’t a logical, rational, black-and-white type of culture.

Tawn and I have discussed this a lot as we want to support his quest to learn about Thai culture.  And one of the things we’ve concluded is that any question you have about a culture rarely has a definitive answer.  There are no absolutes.  There may be generalities, but trying to conflate a generality with a certainty results in missing the finer nuances of a culture.  And it is within those nuances that the essence of the culture really lies.

It’s kind of like when you are learning a new language.  You are tempted to ask, “What does this word mean?”  But as Mme. Morel, the French-Vietnamese linguist who taught me several months of French at The French Class in San Francisco put it, “Words don’t mean anything.  The question is, how is the word used?” 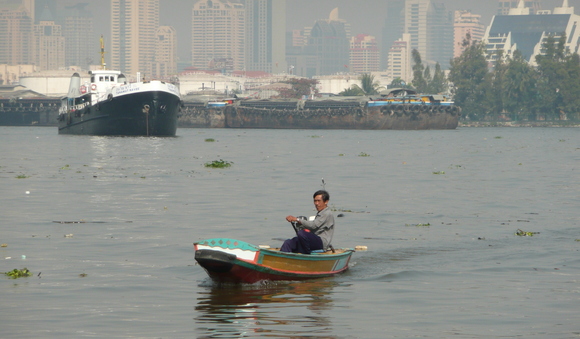 Helen James, author of Thai Reference Grammar, goes so far as to bold the text in her explanation of the word: “bpen is not a verb ‘to be’ … [instead, it] identifies a relationship between two noun phrases or between a noun/noun phrase and an adjective/adjective phrase.”

In the same way, Thai culture isn’t this way or that way.  It identifies the relationship between people and between individuals and the institutions that make up Thai society.

Given the unique relationship Thai society has with water – the heart of the country is essentially a flood plain, after all – the water motif is a suitable metaphor for the nature of Thai culture: a fluid thing that “is” one thing but is also so much more.