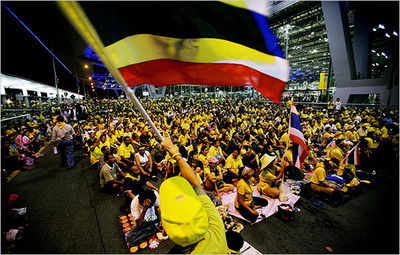 Tuesday evening a group of several thousand protesters – members of the PAD, or People’s Alliance for Democracy – set their sights on a new target: Suvarnabhumi International Airport, Bangkok’s gateway to the world.  Already during the week they had shut down the city’s domestic airport and were protesting elsewhere in the city for the Prime Minister to resign and dissolve the government.

Right: PAD members at the departures level of the airport.

But now we have a truly international mess: thousands of tourists and business people stranded, unable to arrive at or depart from the airport.  We have images of protesters acting like thugs and terrorists – a group of six or more protesters surrounded a motorcycle taxi driver, beating him and holding a knife to his throat before letting him go. 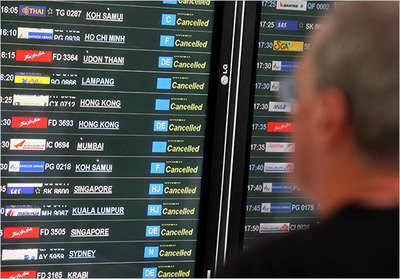 It is as if in their pursuit of their political goal, they are willing to drag the entire country down.

“All this will go away if the Prime Minister just resigns,” the PAD says.

Prediction: a year from now, Thailand’s economy will be even further in the dumps after foreign investors have decided that this was the straw that broke the camel’s back.  Tourism will have shriveled another twenty percent or more.  Suddenly Malaysia is looking like a better choice for a tropical holiday.

Food for thought: the PAD is largely composed of members of the upper- and middle classes.  Groups that are more insulated from the effects of their seige of the airport.  Pity the poor member of the working class (who most likely voted for the elected government) and are caught up in this storm, unable to make a living.

5 thoughts on “Suvarnabhumi Under Seige”